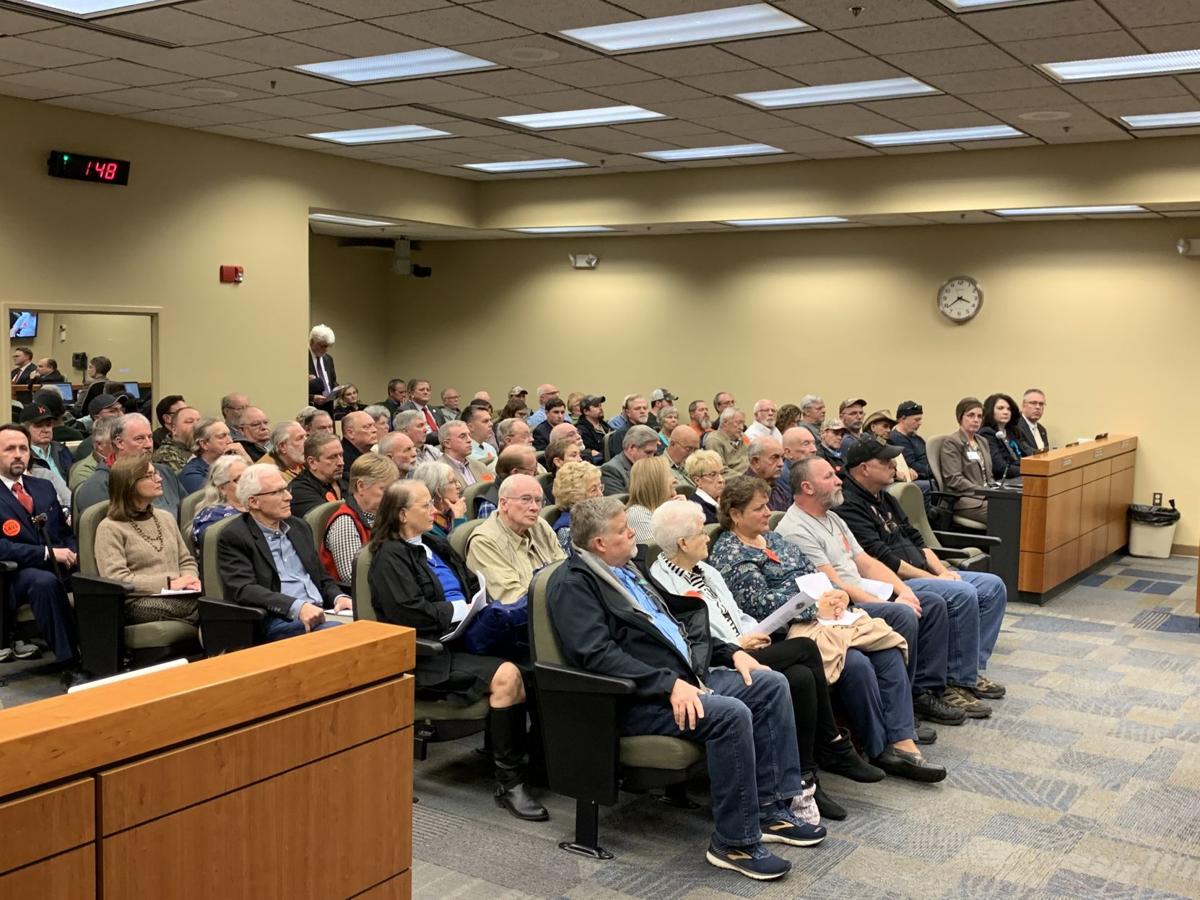 About 275 people packed the Roanoke County Board of Supervisors meeting room, the hallway and an overflow room to speak on the board's decision to become a Second Amendment sanctuary. The board unanimously passed the resolution. 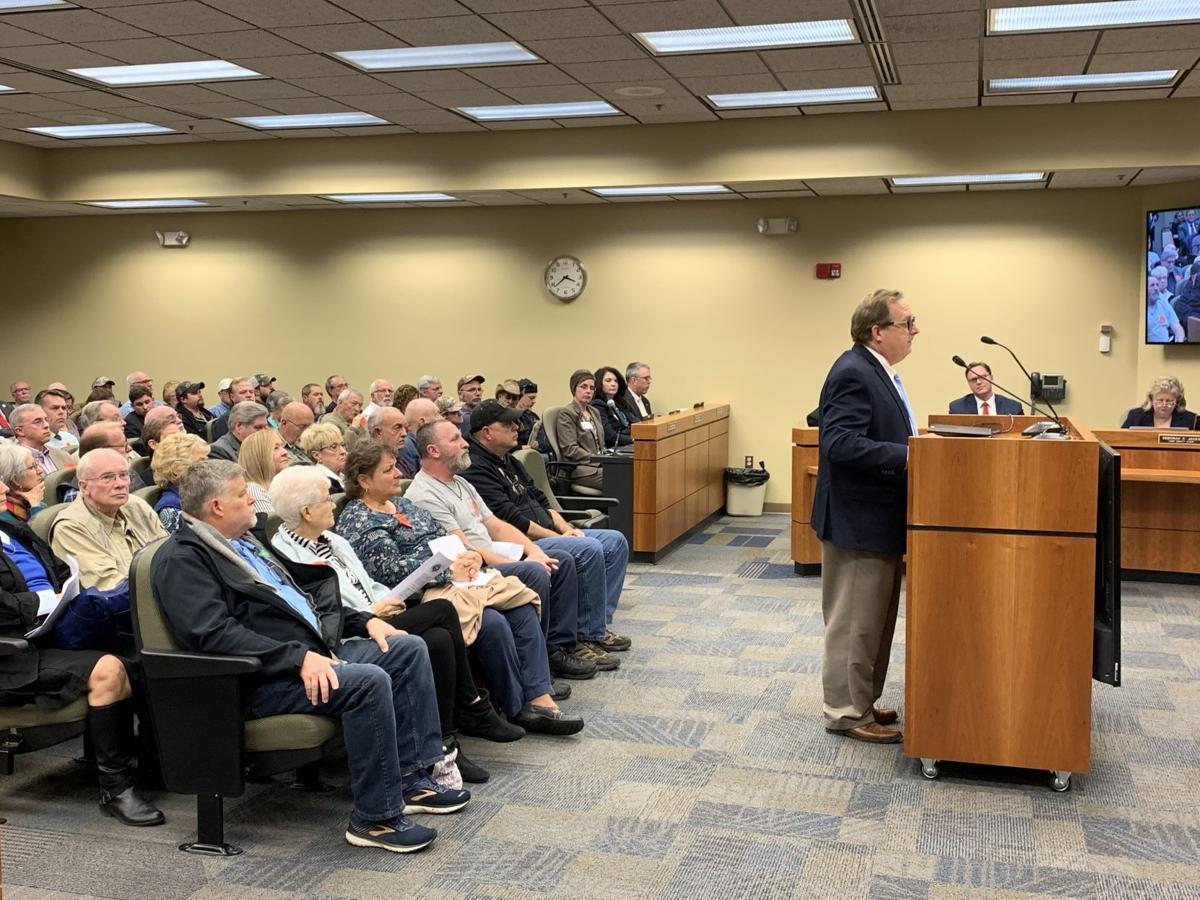 Del. Joe McNamara, R-Roanoke County, speaks to the board of supervisors on Tuesday in support of a resolution declaring Roanoke County a Second Amendment sanctuary.

About 275 people packed the Roanoke County Board of Supervisors meeting room, the hallway and an overflow room to speak on the board's decision to become a Second Amendment sanctuary. The board unanimously passed the resolution.

Del. Joe McNamara, R-Roanoke County, speaks to the board of supervisors on Tuesday in support of a resolution declaring Roanoke County a Second Amendment sanctuary.

Roanoke County has joined more than 30 other Virginia localities in declaring itself a Second Amendment sanctuary.

The county’s board of supervisors unanimously passed the resolution with no discussion at its meeting Tuesday. The vote came after two hours of public comment with close to 40 speakers — the majority of which supported the resolution.

Second Amendment advocates have recently packed local government meetings across the state, calling on boards and councils to pass resolutions declaring themselves gun rights sanctuaries. The movement comes in response to anticipation of gun control bills being considered in January as Democrats take control of the Virginia General Assembly.

Del. Chris Head, R-Botetourt, whose legislative district includes part of Roanoke County, said the resolution would be symbolic, but would send a clear message to lawmakers in Richmond and Washington.

County residents agreed and said the gun laws proposed by Democrats would place an undue burden on law-abiding citizens. They said the U.S. Constitution allows the right to own guns so citizens can protect themselves against criminals and a tyrannical government.

“The Second Amendment protects all the others,” resident Randolph English said. “Lose this one, kiss the rest of them goodbye.”

Nine people spoke out against the resolution and asked the board not to pass it. They called it “ridiculous,” “embarrassing” and a waste of time.

“I urge you to spare Roanoke County’s reputation as a friendly place where culture and commerce thrive in an appealing natural environment,” resident Bob Crawford said. “Don’t give us a black eye by declaring our county a Second Amendment sanctuary area.”

“The legal precedent we would set by allowing communities to selectively ignore these laws at will is alarming and indicative of the same mindset that nearly 150 years ago led this country to dissolve into a civil war,” Jones wrote to Herring. “Assuredly, if the duly-elected General Assembly passes measures to advance gun safety in the commonwealth, I believe the legislature should be able to do so without actions by localities to undermine its efforts.”

Jones said a formal opinion would be helpful to localities as they receive requests to join the Second Amendment sanctuary movement.

“Moreover, I worry that the absence of such an opinion could hamper the legislature’s ability to duly consider and pass gun safety legislation next year,” he wrote.

Roanoke City Council decided not to consider a sanctuary resolution at its meeting Monday. Mayor Sherman Lea told a crowd of 100 that the city has no authority or intent to violate the U.S. or Virginia constitutions.

“I see no need or benefit to any action by this city validating what the Constitution already guarantees,” said Lea, who is part of the Democratic majority on the city council.

Salem declines, for now, to join on the Second Amendment sanctuary movement

The Salem City Council declined for now to declare the city of 25,000 a Second Amendment sanctuary after two dozen people showed up to a council meeting in support of it.