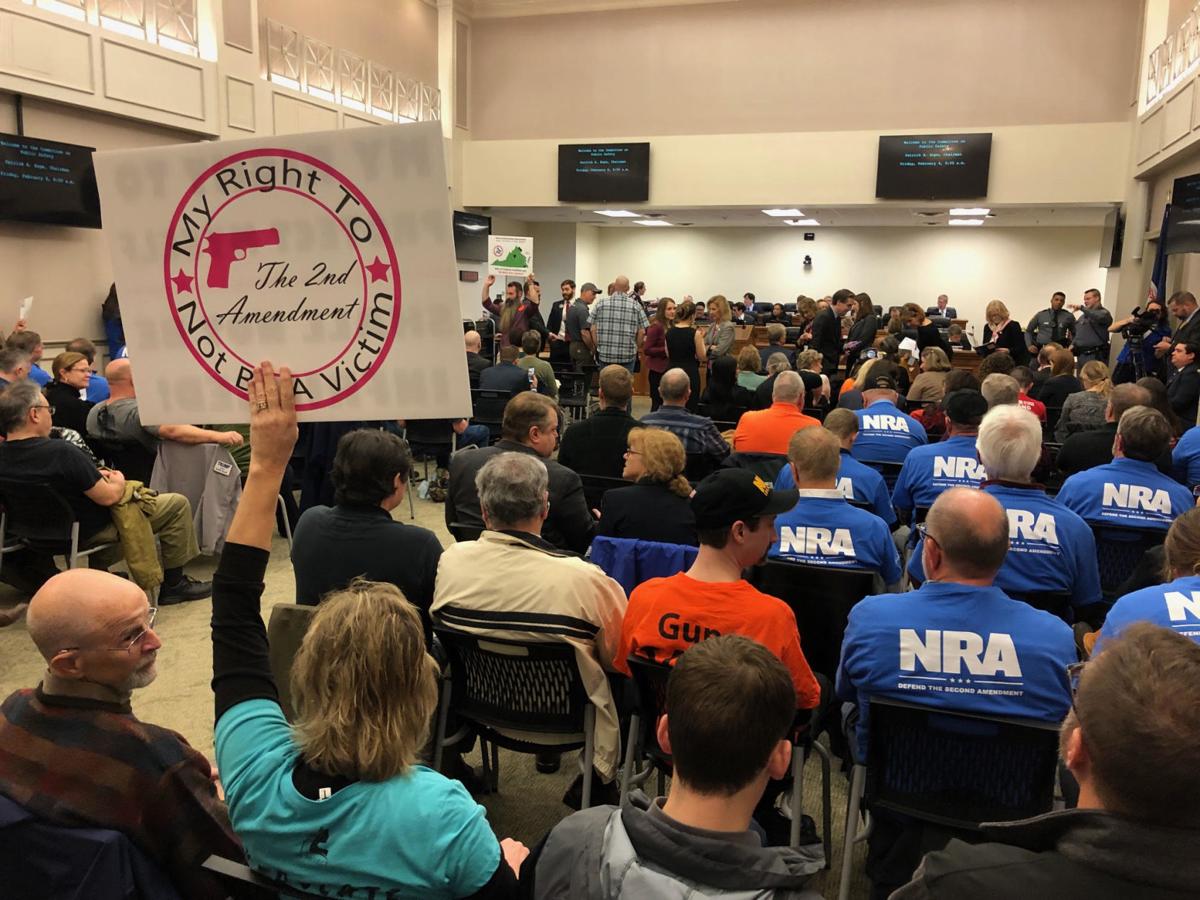 After presenting House Bill 961, his measure to ban assault weapons, to a standing-room-only meeting of the House Public Safety Committee, Del. Mark Levine, D-Alexandria, stands before members of the audience raising their hands in opposition to his bill. Most people in the room at the Pocahontas Building opposed the bill, which later passed on a party-line vote, 12-9.

After presenting House Bill 961, his measure to ban assault weapons, to a standing-room-only meeting of the House Public Safety Committee, Del. Mark Levine, D-Alexandria, stands before members of the audience raising their hands in opposition to his bill. Most people in the room at the Pocahontas Building opposed the bill, which later passed on a party-line vote, 12-9.

A House of Delegates committee on Friday backed the most controversial bill of Virginia Democrats’ gun control package, a vote that led to gun-rights supporters being escorted out of a committee room.

The House Public Safety Committee voted 12–9 to send a revised version of an assault weapons ban proposed by Del. Mark Levine, D–Alexandria, to the full House of Delegates. The House will have to act on the measure, House Bill 961, by Tuesday—the deadline for the Senate and House to vote on their own bills so approved measures can cross over to the other chamber.

“These assault weapon laws have been shown consistently to reduce mass murder,” Levine said of the measure, which is one of the eight gun control bills that Gov. Ralph Northam backs. “We’re not banning guns … but we will reduce the incidents of mass murder and we will reduce, in particular, the fatalities from mass murder.”

Secretary of Public Safety Brian Moran said that assault weapons “are not protected by the Second Amendment” and that the court system will uphold the legislation. A federal assault weapons ban was in place from 1994 until 2004.

The committee, in its final meeting before Crossover, agreed, advancing the bill on a party-line vote.

The endorsement came after a tense early-morning meeting at which gun-rights proponents—many of whom came to Richmond on Jan. 20 for a rally that drew an estimated 22,000 people—said the bill would infringe on their Second Amendment rights.

“They’re not listening to massive numbers of people saying ‘No, you’re not going to violate my constitutional rights,’ ” Philip Van Cleave, the president of the Virginia Citizens Defense League, said in an interview.

Immediately after the vote, gun-rights supporters, who wore VCDL’s “Guns Save Lives” stickers, started yelling at committee members, saying things such as: “We will not comply.”

The crowd, which filled the House Committee Room in the Pocahontas Building and had overflow supporters in the hallways, was then forced to leave the room under threat from Capitol Police that people who did not leave would be arrested.

Del. Patrick Hope, D–Arlington, the committee’s chairman, stood behind the decision to have Capitol Police clear the room.

The meeting continued after the incident, with only committee members, police and media present.

The proposed ban on assault weapons is the only bill of the Northam-backed package that hasn’t yet cleared the House of Delegates.

Even with the changed version of the bill, which Levine described as a compromise so current assault weapon owners can keep their guns without registration, supporters of the bill say it will save lives.

“These guns were never, ever designed for civilian use,” said Del. Jeff Bourne, D–Richmond. “They are military assault rifles designed to kill as many people as possible.”

Opponents say it infringes on the Second Amendment.

“We have a right to protect ourselves,” said Del. Tommy Wright, R–Lunenburg.

If the House approves the bill, it will go to the Senate, which does not have its own bill to ban assault weapons.

Senate Majority Leader Dick Saslaw, D–Fairfax, had proposed an assault weapons ban, a measure that did not include a “grandfather” provision for current owners of weapons deemed assault weapons. That prompted concerns from gun-rights supporters about confiscation. Saslaw withdrew his bill the first week of the session.

Hope, chairman of the House public safety committee, said he’s optimistic about the bill’s future if it gets to the Senate.

“We want to do something about this. Our House members feel very strongly about leading in this area,” Hope said. “It’s a strong bill and I think the Senate will be supportive.”

Also Friday, the committee voted to remove the option for people trying to get a concealed handgun permit to demonstrate their competence by completing an online test.

The Senate has already approved that measure.

These guns were never, ever designed
for civilian use. They are military assault rifles designed to kill as many people as possible. —Del. jeff bourne,
D–Richmond

Jeff Bourne, another dangerous fool who knows nothing of what he is writing laws about. The semi-automatic firearms he is legislating, were designed specifically for civilian use because of their modularity and ergonomics.

What a load of manure. Levine is more ignorant of firearms than Bloomberg. It is a tragedy that we have fools writing our laws that are totally ignorant of the subject.