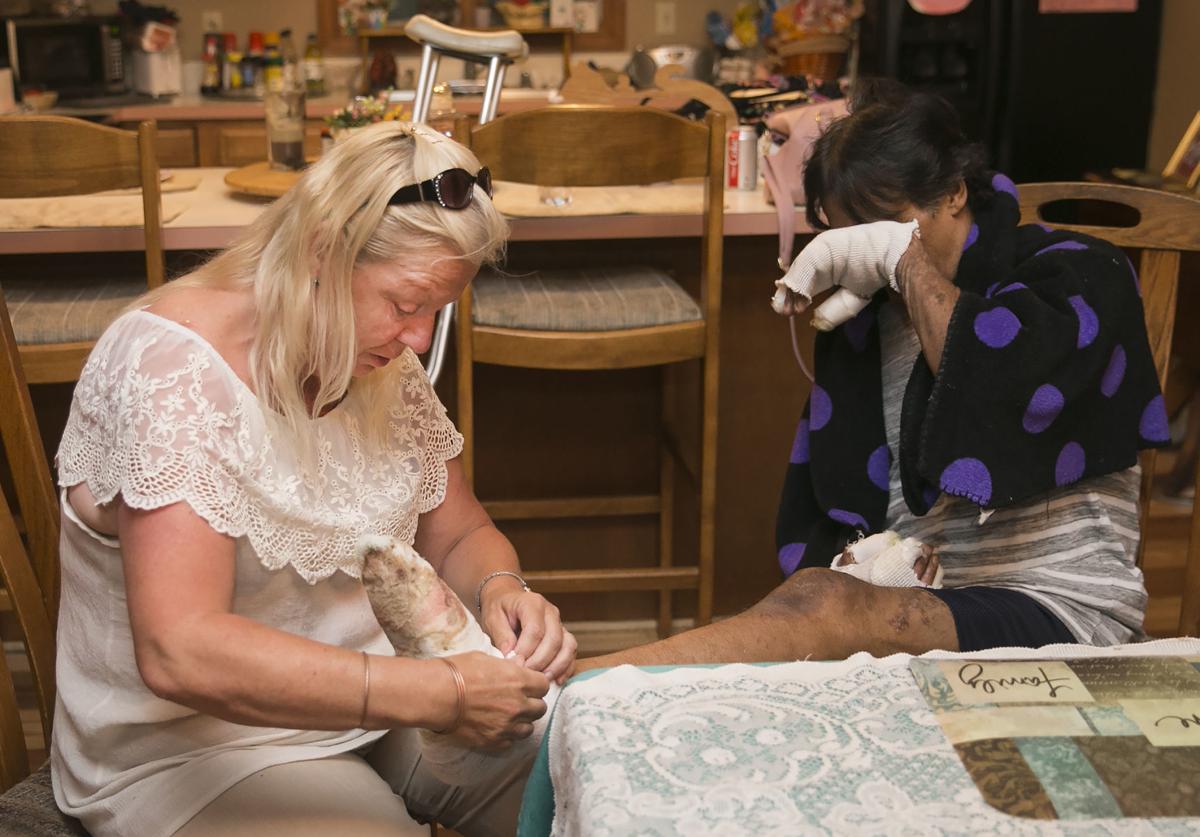 Quintin Beltran reacts to pain caused as his wife, Diana, works to change the dressings on his left foot. He suffered damage to his hands and feet as a result of Rocky Mountain spotted fever. 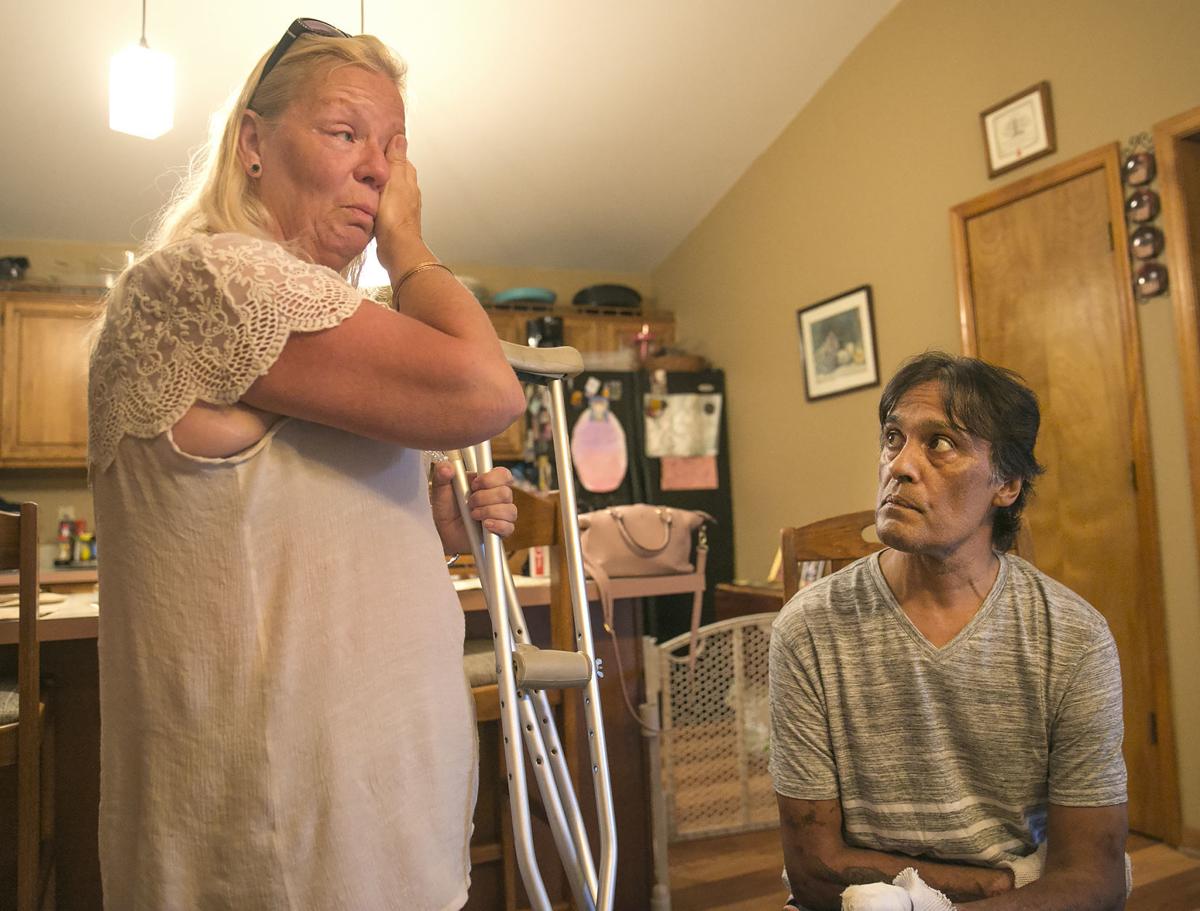 Quintin Beltran listens as his wife, Diana, recounts the medical, emotional and financial devastation from a tick bite. 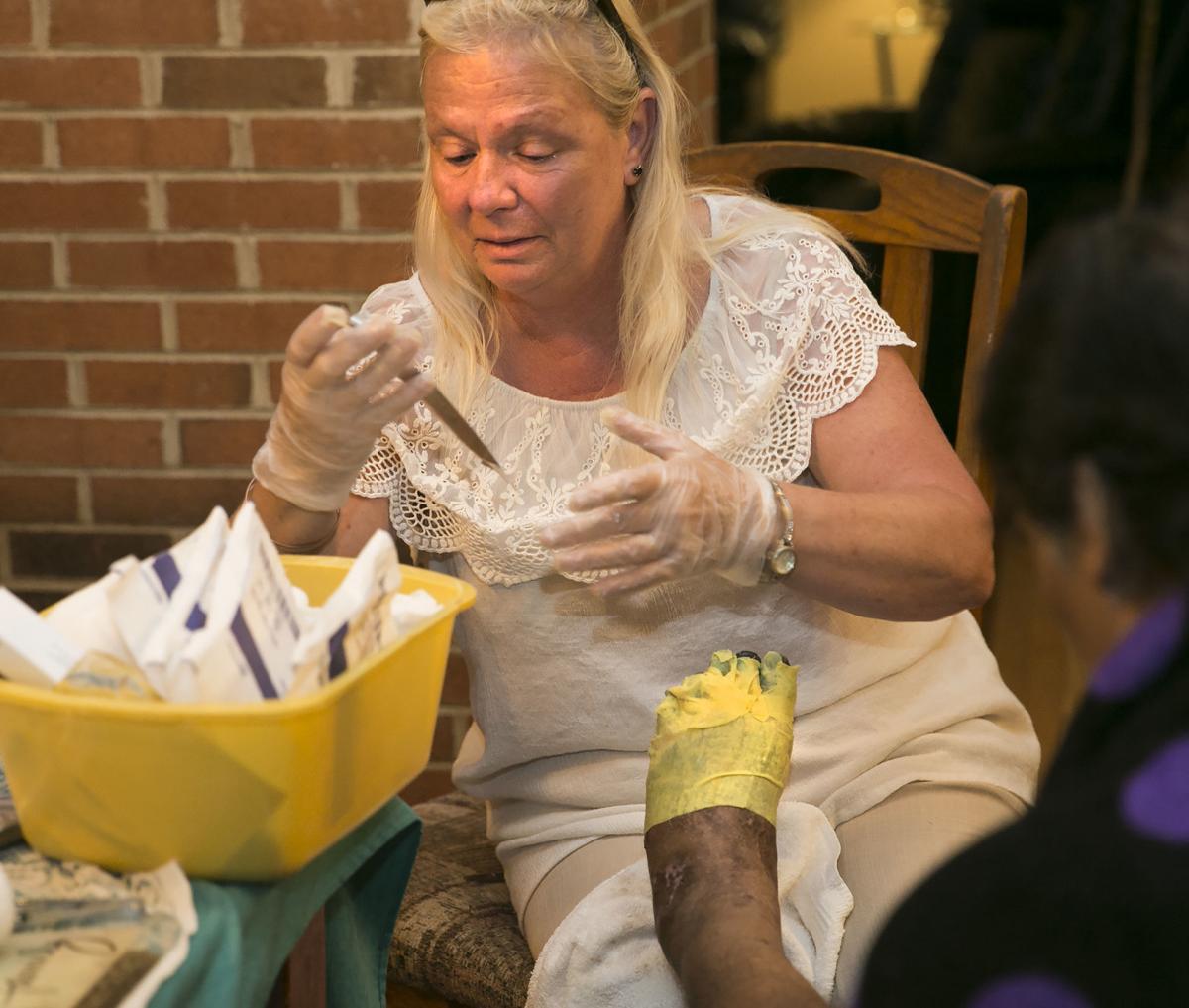 Diana Beltran changes the dressings on her husband Quintin's foot at their Spotsylvania County home. He contracted Rocky Mountain Spotted Fever after being bitten by a tick in April.

Quintin Beltran reacts to pain caused as his wife, Diana, works to change the dressings on his left foot. He suffered damage to his hands and feet as a result of Rocky Mountain spotted fever.

Quintin Beltran listens as his wife, Diana, recounts the medical, emotional and financial devastation from a tick bite.

Diana Beltran changes the dressings on her husband Quintin's foot at their Spotsylvania County home. He contracted Rocky Mountain Spotted Fever after being bitten by a tick in April.

Quintin Beltran cringes in pain while his wife, Diana, works as tenderly as she can to change the dressing on his wounds. He’s suffered damage to his hands and feet, but his left leg, from the ankle down, bears the worst of it. The foot is swollen and disfigured to the point it doesn’t even look like flesh. Toes are black as midnight and glistening, while other patches are white or pale pink, where new skin grows.

Foul-smelling fluid has seeped onto the bandages, and Quintin Beltran bows his head in agony as his wife removes them, then wraps clean, medicated bandages around each digit.

The Spotsylvania County couple has been dealing with this devastation since April, but she’s still shocked when she thinks about the culprit.

“I can’t believe such a big guy was taken down by a little tick,” she said.

Beltran, a 60-year-old flooring contractor known to work from sunup to sundown, contracted Rocky Mountain Spotted Fever from a tick bite this spring. He was pulling weeds in the yard of what she calls their “dream home” when he found the small insect, an American dog tick, on his inner thigh.

Within about 10 days, he started throwing up and alternating between chills and feeling feverish. Symptoms mimicked the flu, and a doctor at an urgent care said he had a viral infection.

When things worsened and tests showed his kidneys and livers were failing, Quintin Beltran was taken to VCU Medical Center in Richmond, where he spent 32 days in intensive care. Doctors ruled out dozens of other conditions, then sent his blood work away for the disease, considered the deadliest carried by ticks. It took three weeks for doctors to get the results.

The condition is now reported to the Centers for Disease Control under a category called Spotted Fever Rickettsiosis, or SPR, which takes in several types of similar tick bacteria. Like other tickborne diseases, there’s been a dramatic increase in recent years.

While this type of bacteria doesn’t cause the chronic and debilitating conditions associated with Lyme disease, its fast-moving infection is potent. Left untreated, death can occur in 80 percent of cases, according to the Mayo Clinic.

Even those who get treatment suffer its ravages as Quintin Beltran has. He has lost 42 pounds and all his muscle, he says. His organs aren’t back to normal levels, but they’re functioning. His wife, who works full time in auto sales, carefully wraps his hands and feet each night, and the limbs have improved.

Blackness initially extended from his fingertips to his wrists and from the tips of his toes to his ankles. But as new skin has grown, the black, dead skin has sloughed off.

The disease damages the lining of the body’s smallest blood vessels, causing them to leak or form clots. Tissues at the farthest extremities tend to die off when blood can’t reach them. Likewise, organs are damaged when blood is cut off from small vessels around the heart or brain, kidneys or liver.

And it’s killing their finances. He didn’t have health insurance; he’s applied for Medicaid and disability, but both are pending, which means he can’t get any home health care because the couple can’t afford to pay for it outright.

He’s sold off some of the vehicles used in his flooring business and other possessions to help pay the bills and shakes his head at sadness at the thought of how hard his wife is working.

“I’m kind of at the end of my rope,” she said, crying, as she wondered how they’d be able to keep their home, where some of their three children and nine grandchildren also live.

“This tick has pretty much wiped us out,” he said.

One of their grandchildren started a GoFundMe page for them. It can be found at GoFundMe.com by searching for Diana Beltran.