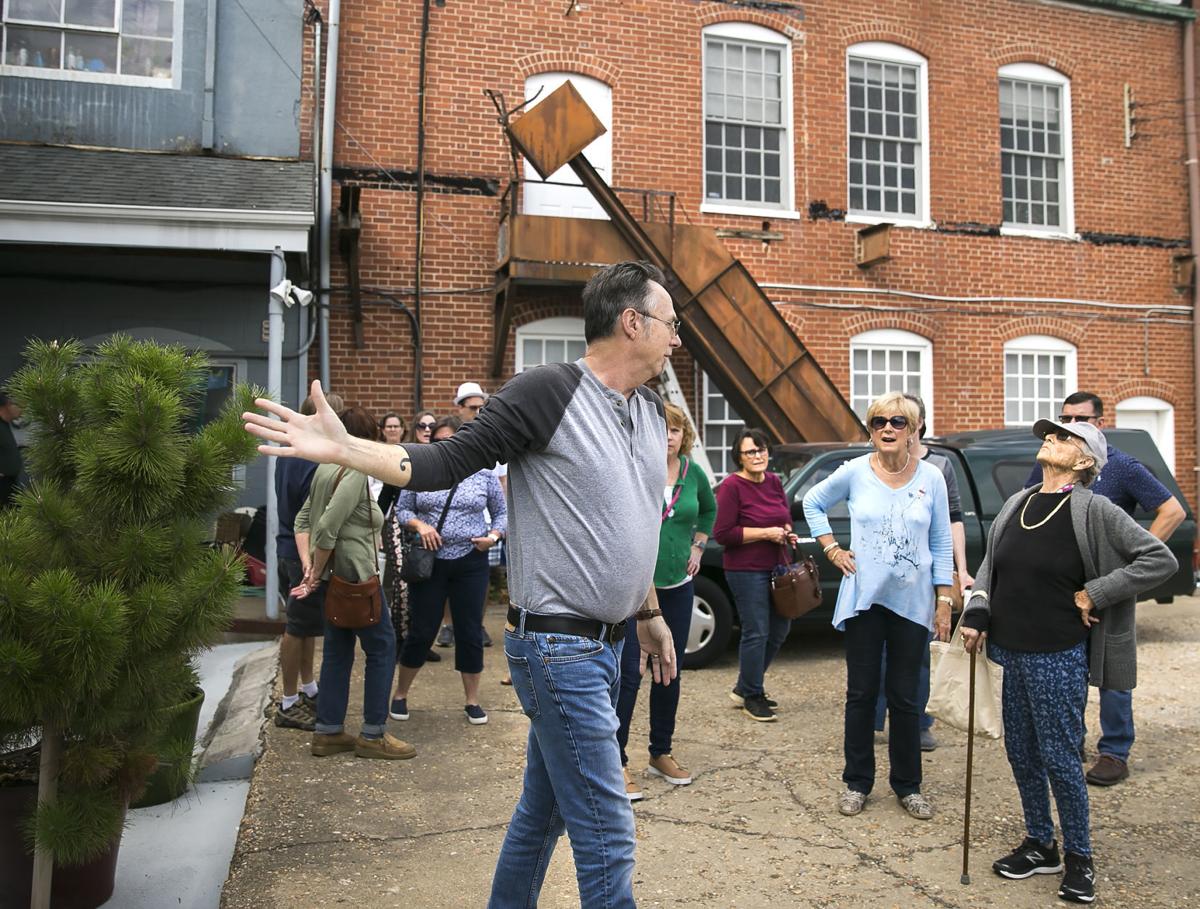 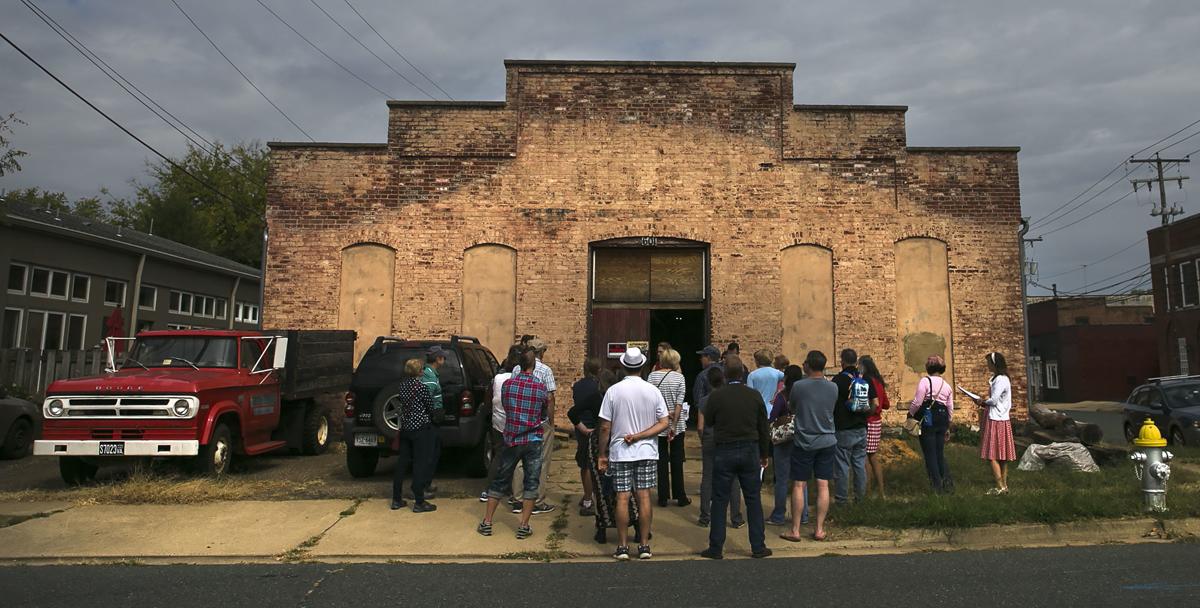 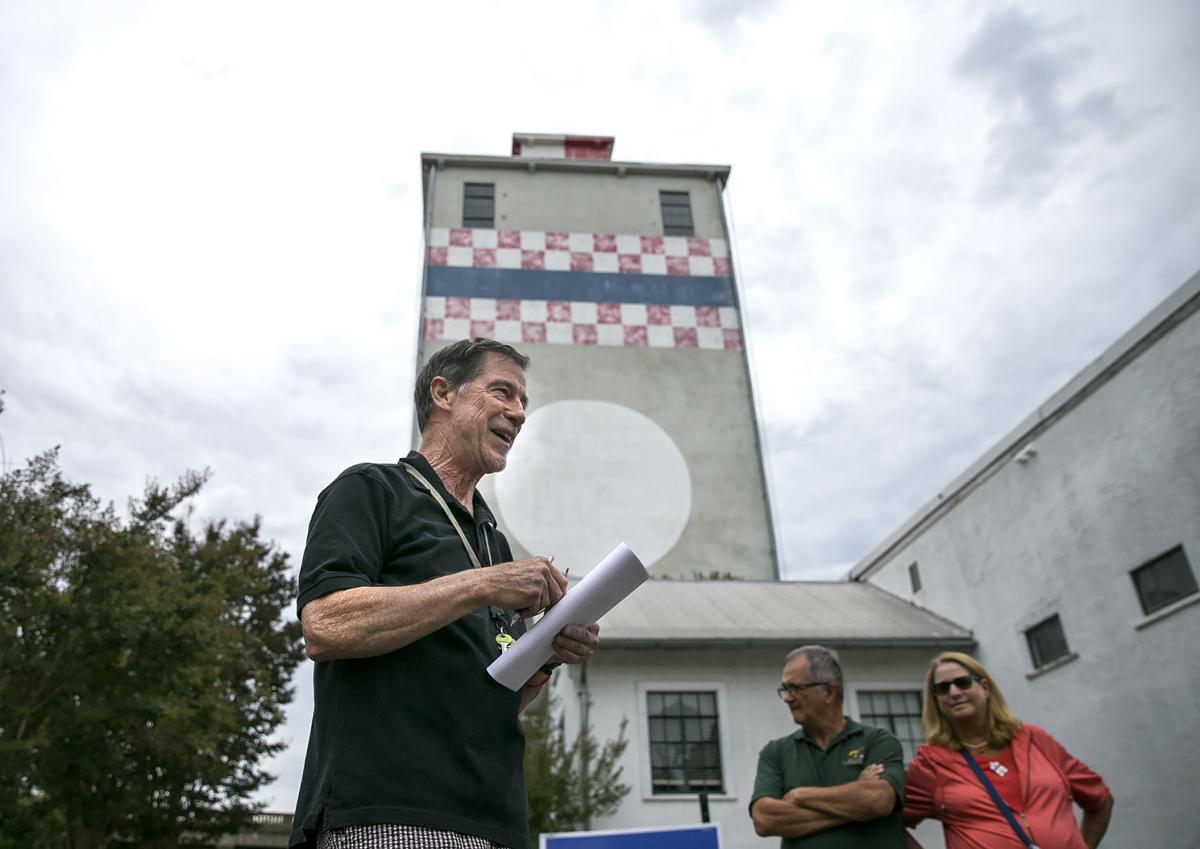 Land surveyor Hamilton Palmer, owner of the Purina Tower, talks to members of the walking tour. 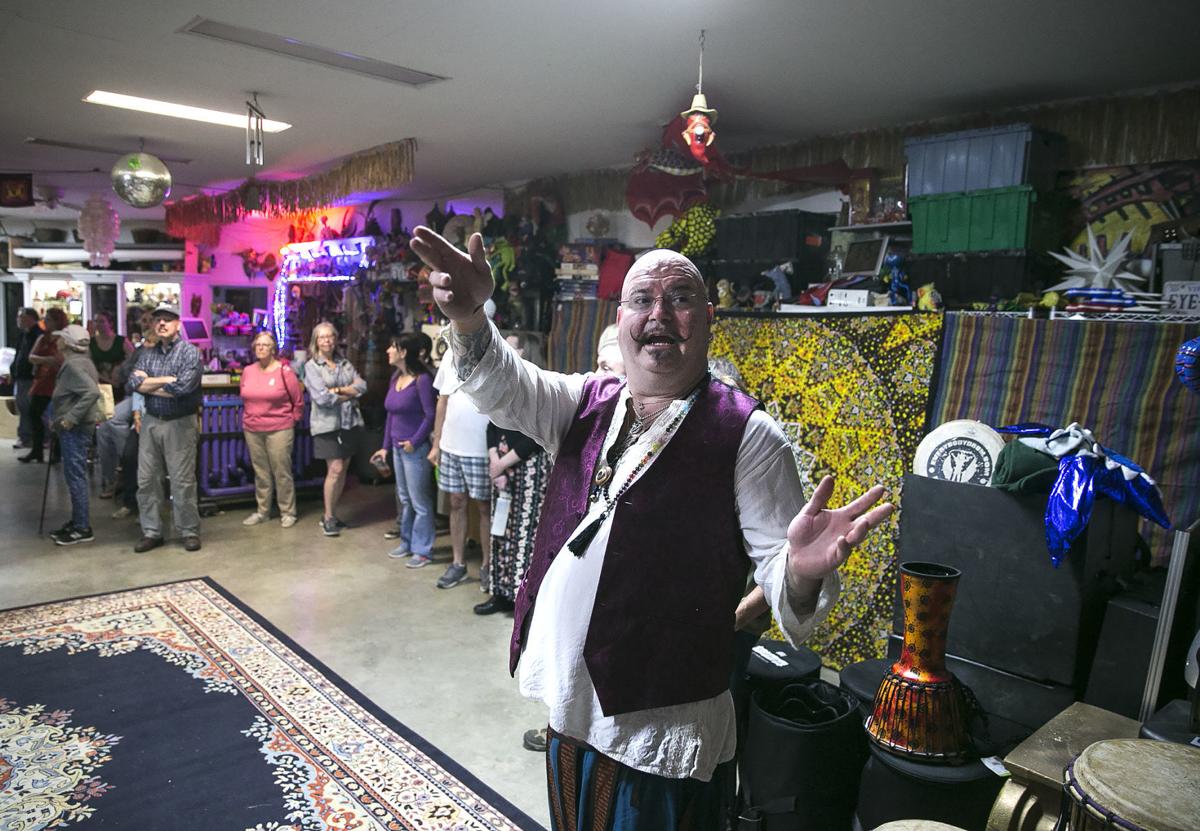 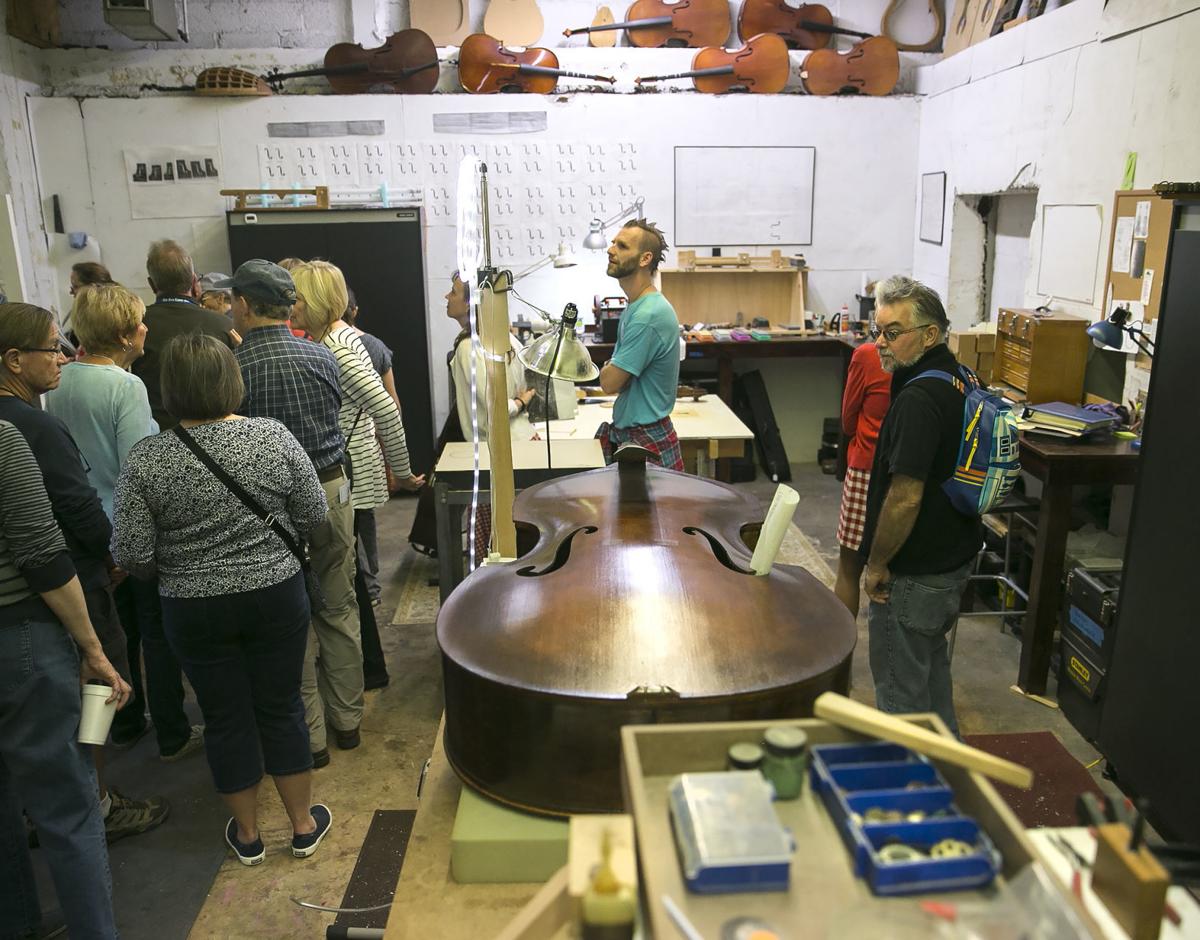 Tour takers walk through the WM Mason II Violin Shop during an event hosted by the Historic Fredericksburg Foundation, Inc. that explored the warehouse district of downtown Fredericksburg on Saturday, Oct. 12, 2019. 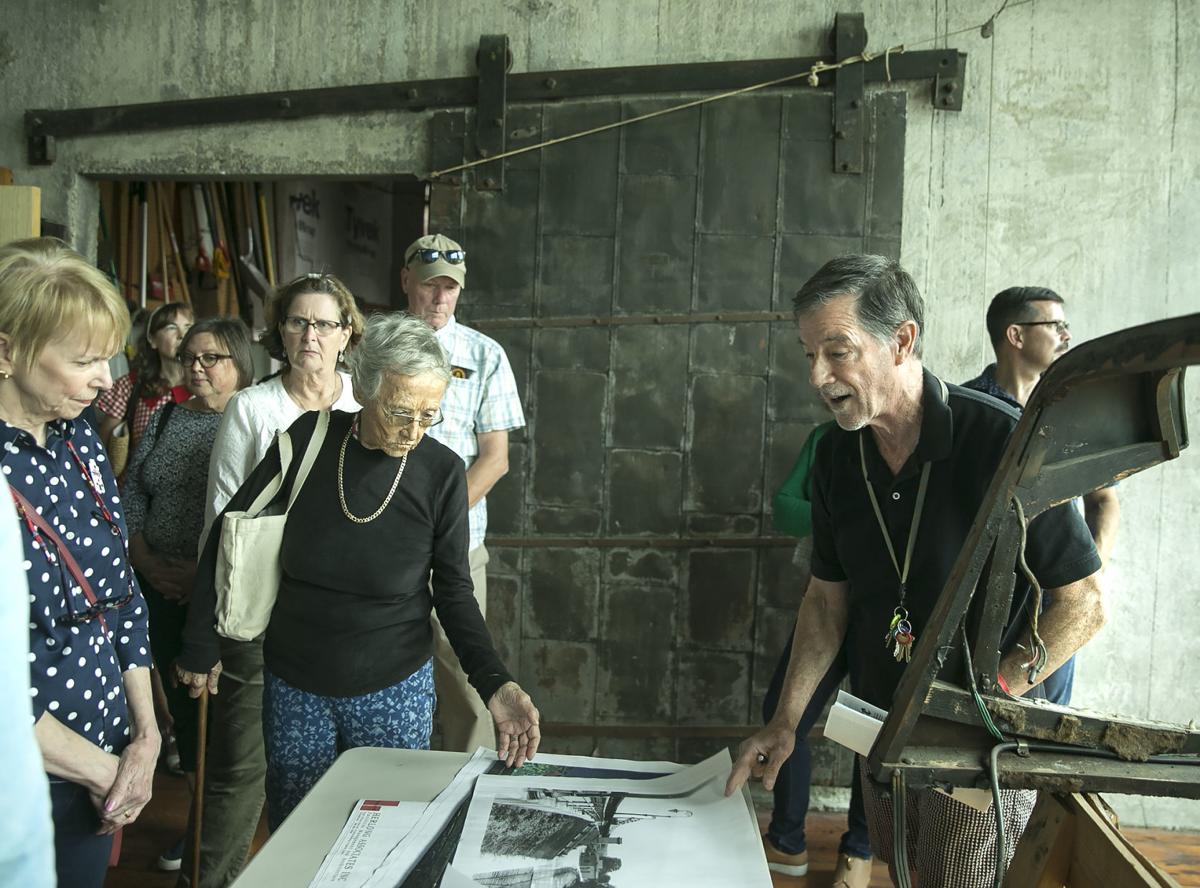 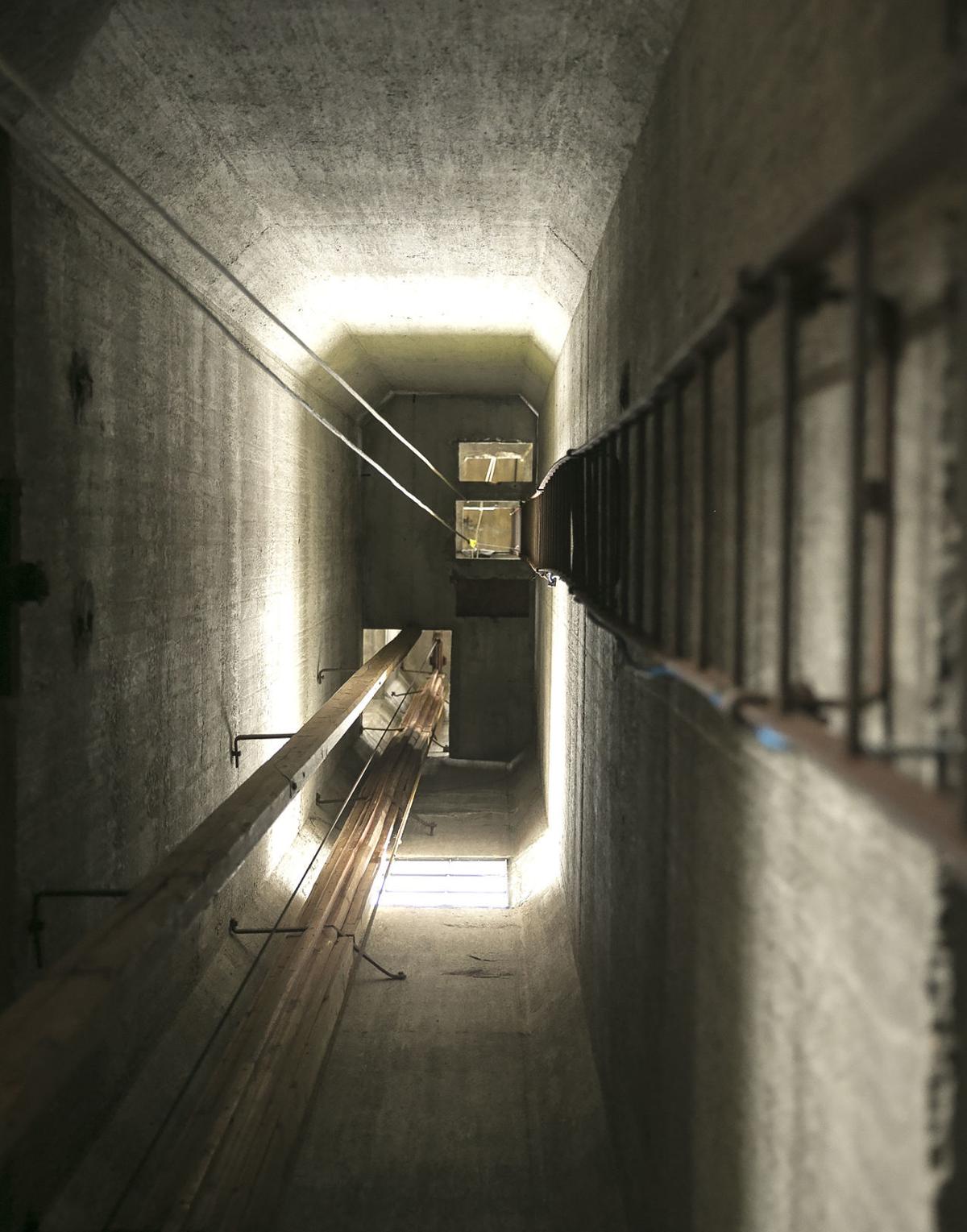 A fifty-step, 80-foot-high ladder ends at the top of the Purina Tower in Fredericksburg.

Land surveyor Hamilton Palmer, owner of the Purina Tower, talks to members of the walking tour.

Tour takers walk through the WM Mason II Violin Shop during an event hosted by the Historic Fredericksburg Foundation, Inc. that explored the warehouse district of downtown Fredericksburg on Saturday, Oct. 12, 2019.

A fifty-step, 80-foot-high ladder ends at the top of the Purina Tower in Fredericksburg.

Barbra Anderson was always fascinated with the 88-foot Purina tower in downtown Fredericksburg.

“Today, we’re going to go in there,” Anderson said. “We’re going to see five warehouses today in this overlooked district of the city.”

On Saturday, 75 guests were guided through the city streets by members of the Historic Fredericksburg Foundation Inc. for a unique, educational walking tour of the city’s once-thriving warehouse district.

Anderson, who serves as event coordinator for the foundation, said the tour was the first of its kind in this part of the city.

“We’ve never had a tour of the warehouse district before,” said Anderson. “This is a great opportunity to crawl around and explore five warehouses that are generally not open to the public.”

The tour included stops at Eyeclopes, a music and arts studio at 620 Charlotte St., which was built in the early 1950s by White and Weeks as a furniture warehouse.

The group then moved to Fraser Wood Elements at 601 Jackson St., which, at one time, served as home to Roxbury Mills before that company moved to their former address on Lafayette Boulevard. The building was originally built in 1917 as a metal egg crate company. The newfangled egg containers gave local farmers the ability to safely ship their fragile shelled product to customers through the mail.

At each stop along the way, the current owners of the warehouses were on hand to provide guests a historical perspective of their surroundings, as well as what is currently being undertaken in each building visited.

“There are lots of things I just never took notice of before and today we’re really up close with history,” said Mark Spraragen of Fredericksburg. “There was a stealth violin shop just sitting right there and I never knew it was there.”

That stealth shop is the Wm Mason II Violin Shop at 509 Jackson St., which leads directly into the heart of the former Farmer’s Creamery Co.

Founded in 1914, the creamery became one of the largest dairies in Virginia. At one time, its warehouses bustled with workers and vehicles coming and going around the clock. By the 1940s, the creamery was serving 40 counties throughout Virginia.

Weber Taylor of Fredericksburg recalled the many occasions in the mid-1960s when she would travel from her family’s farm in King George to the creamery to cash in for the families weekly groceries.

“I still have this, it’s a gallon can, it looks like a big milk can with a handle,” Taylor said. “Every week or 10 days, I would bring cream to the Farmer’s Creamery with that can filled with cream that I skimmed from the family cow’s milk.”

Taylor said she would enter the creamery through a side door where she was always greeted by an elderly man.

“He would stick some kind of thing that looked like a thermometer down in it, that I think gauged the thickness of the cream and how well I skimmed it,” Taylor said. “He’d give me $8 or $12, which was enough to buy what my family of five needed from the grocery store.”

The Janney–Marshall Company once housed a wholesale grocery business that started in 1868. It lasted for 111 years, and sold such items as gunpowder, dynamite, molasses, liquor, flour, cement, coffee and cough syrup.

Although the building is being converted into luxury condominiums today, the deep historical character of the building still remains.

“If we’re going to be America’s most historic city, we have to save our historic spots,” said Clint VanZandt of Fredericksburg. “That’s what this town tries to do in so many areas.”

Perhaps the most-anticipated stop of the tour was the final one at the Purina Grain Tower at 403 Charles St.

Back in the day, the tower housed 15 silo storage bins and a grain elevator that was engineered and designed years ahead of its time.

“For its time, it was state of the art,” said Mayo Carter, who serves on the foundation’s events committee. “The elevator and the techniques they used, it was bells and whistles.”

The 100-year-old facility stored grain and supplied area farmers until 1966.

Pauline Felder of Fredericksburg grew up in the warehouse district and never had the opportunity to go inside many of the buildings in the area when she was a child.

“I always wanted to go inside these places,” Felder said. “I got my first helmet and riding boots in the Purina building back when it was a tack shop. I’m excited to go in there.”

Along with the warehouses on the tour, the two-and-half hour tour also provided participants a broad historical perspective on many of the historic sites and buildings in the warehouse area.

“I think it’s fascinating,” said Jason Kunkler of Fredericksburg. “The different buildings and the history, and there’s as much content coming from the people on the tour as from the tour guides at the warehouses themselves.”

Anderson said only one tour for 25 guests was originally planned, but demand for tickets was so high, two additional tours for 50 additional participants had to be added to accommodate the overflow.

Anderson said they hope to hold a similar event next year.

The Historic Fredericksburg Foundation Inc. preserves, protects and revitalizes the character of historic Fredericksburg. The group organizes the December Holiday Candlelight Tour downtown, as well as a number of events throughout the year, to share the history of the city with the public.