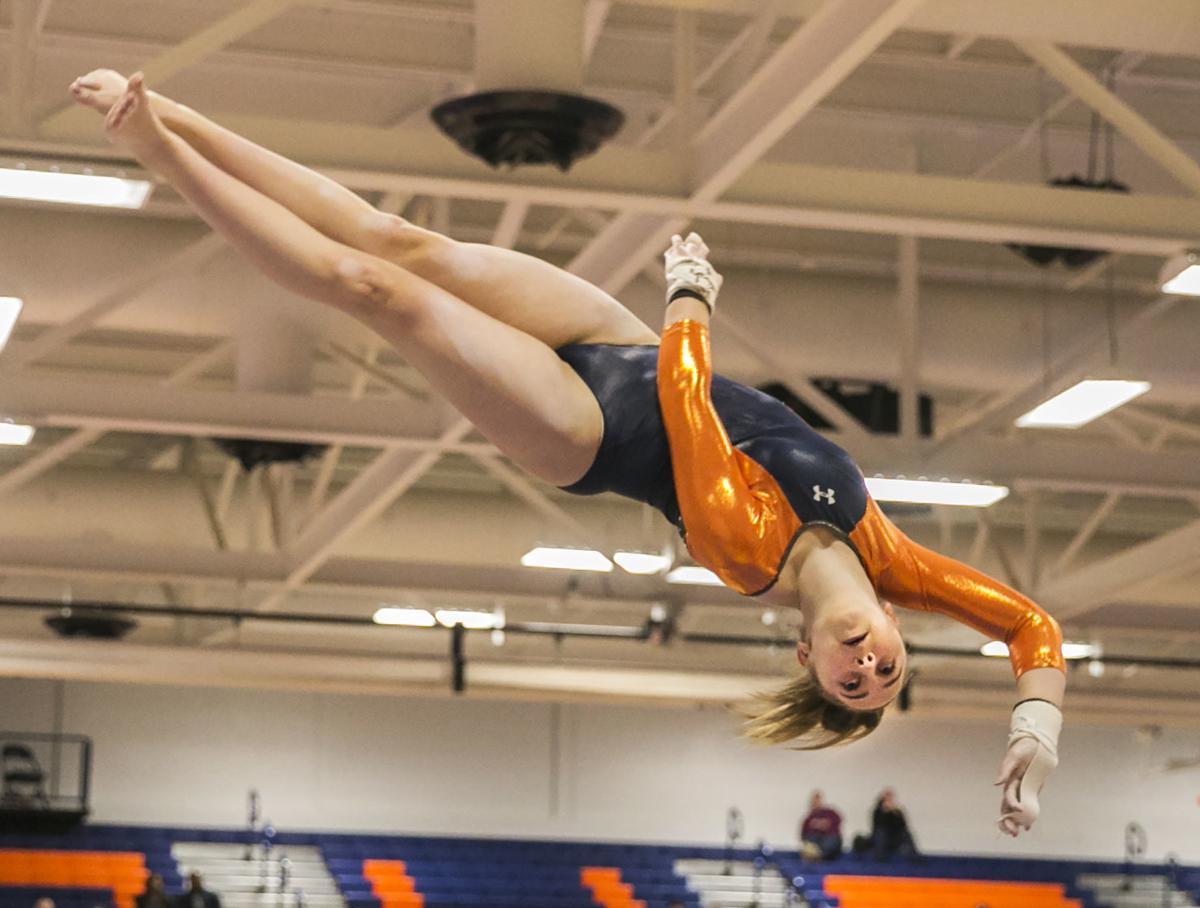 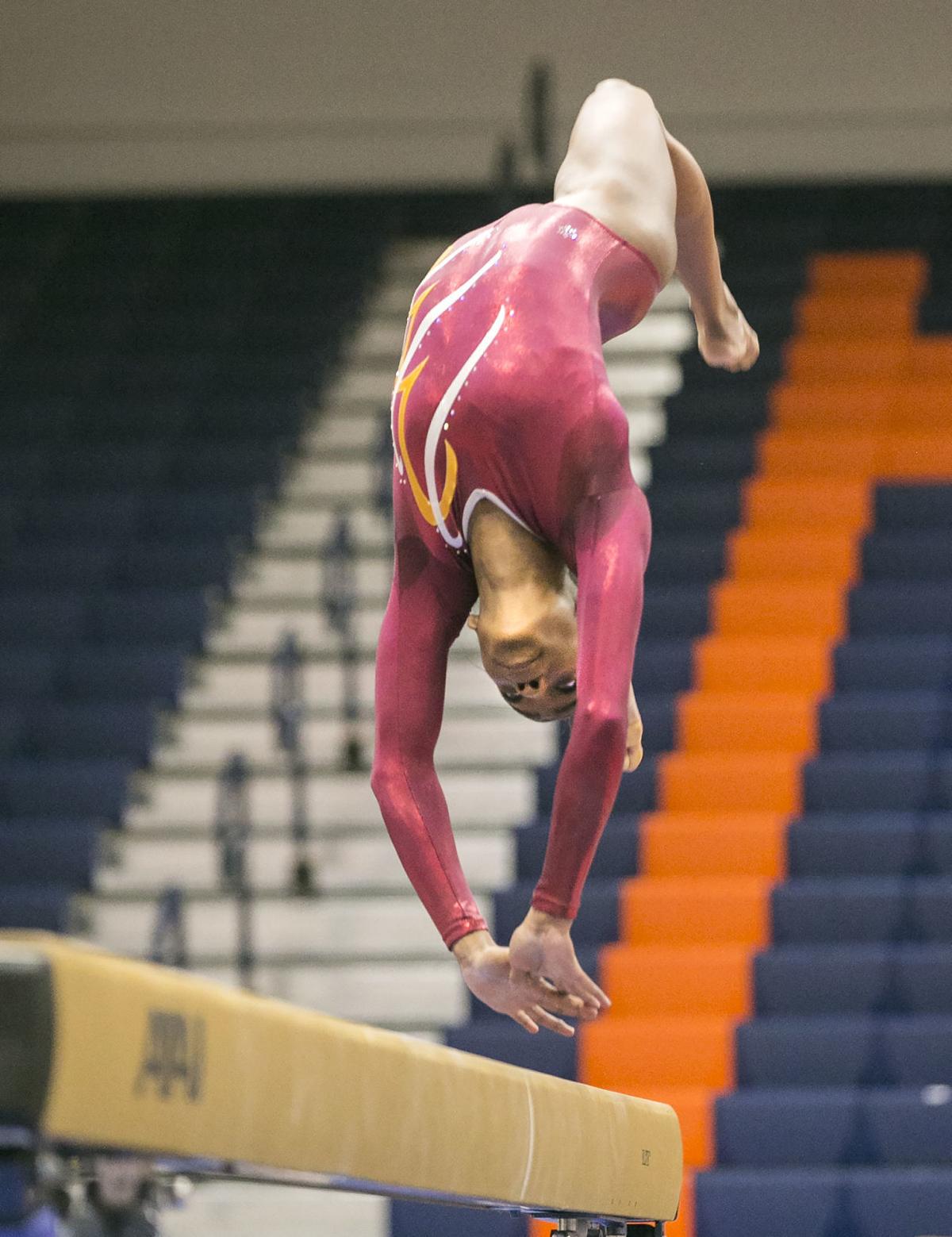 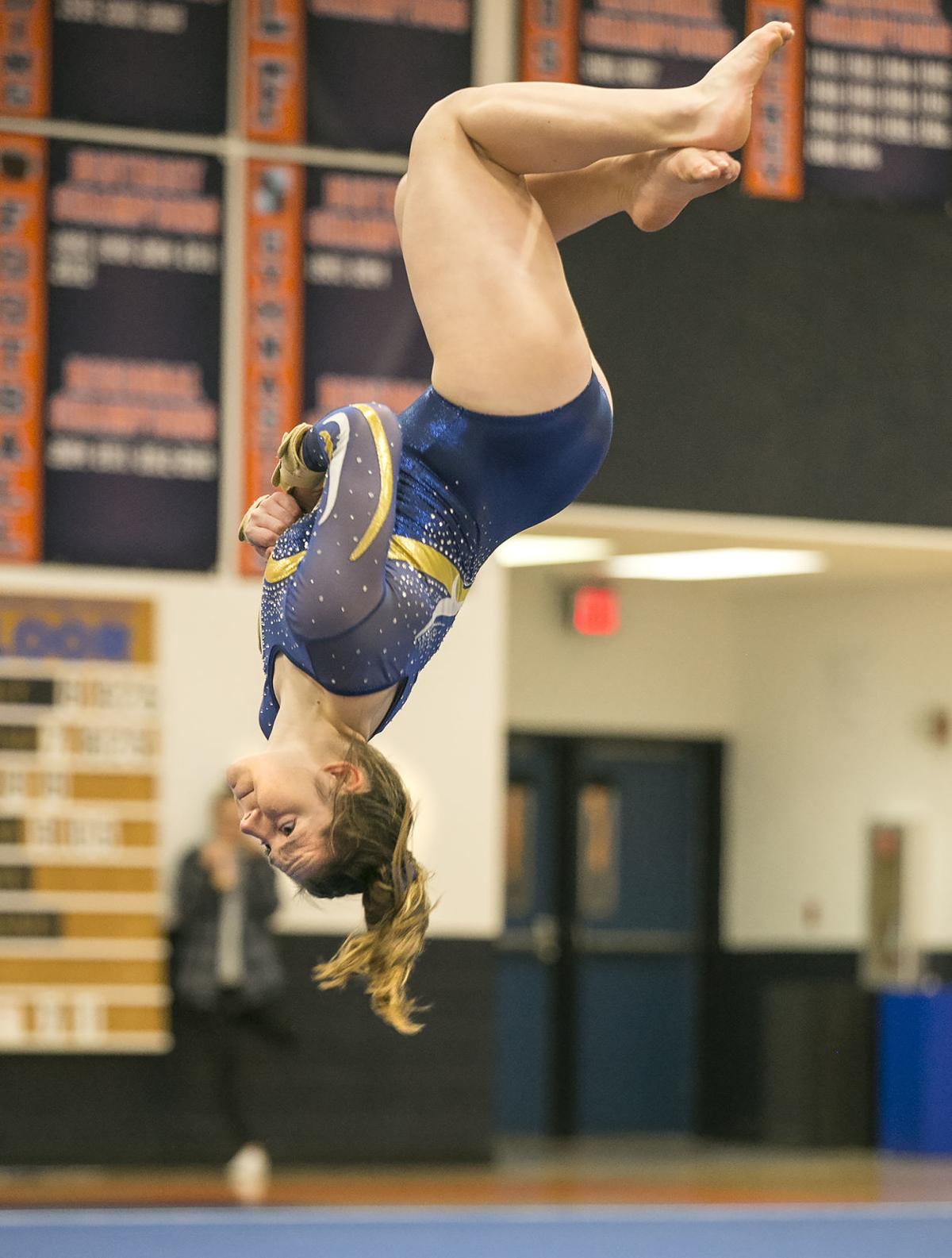 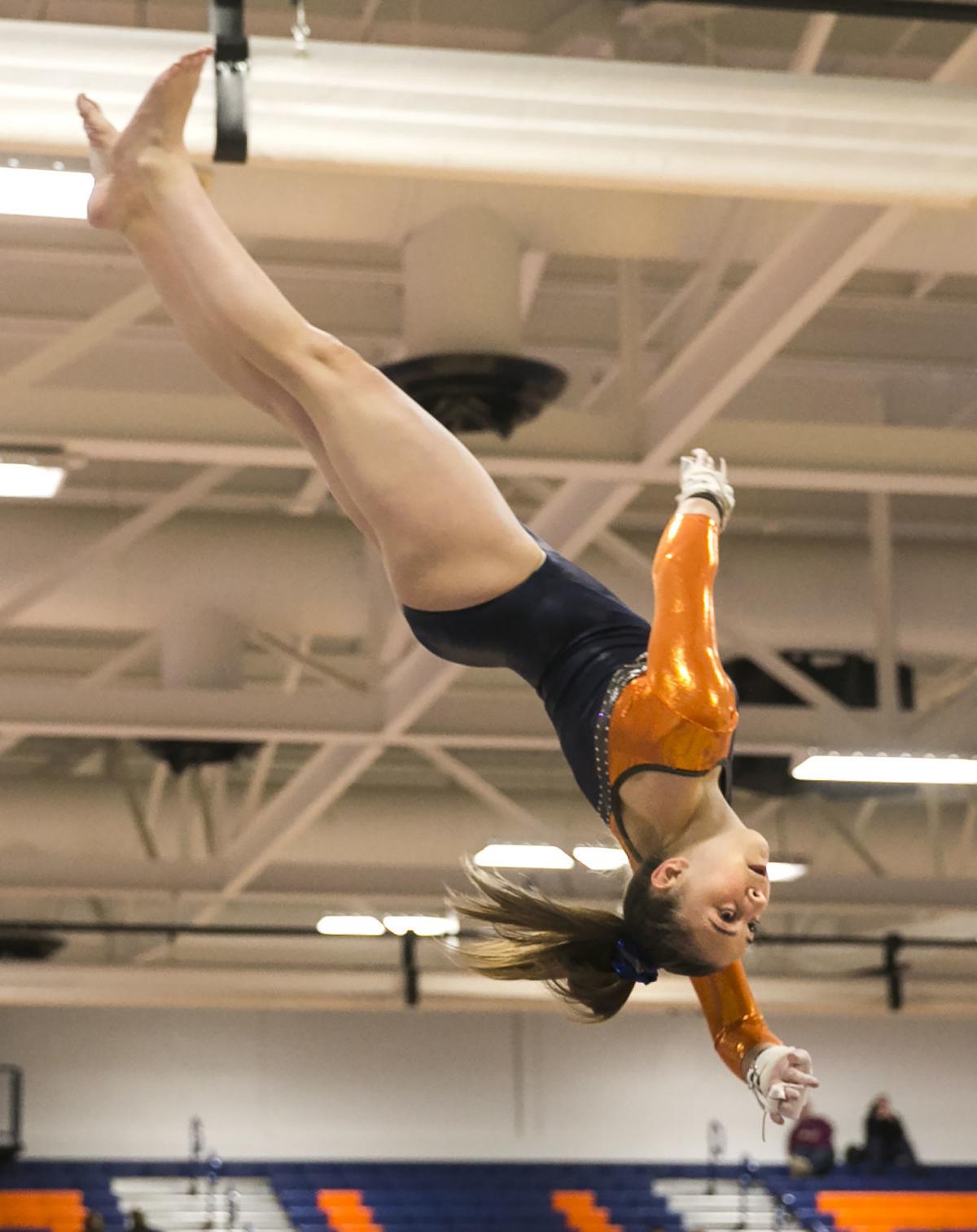 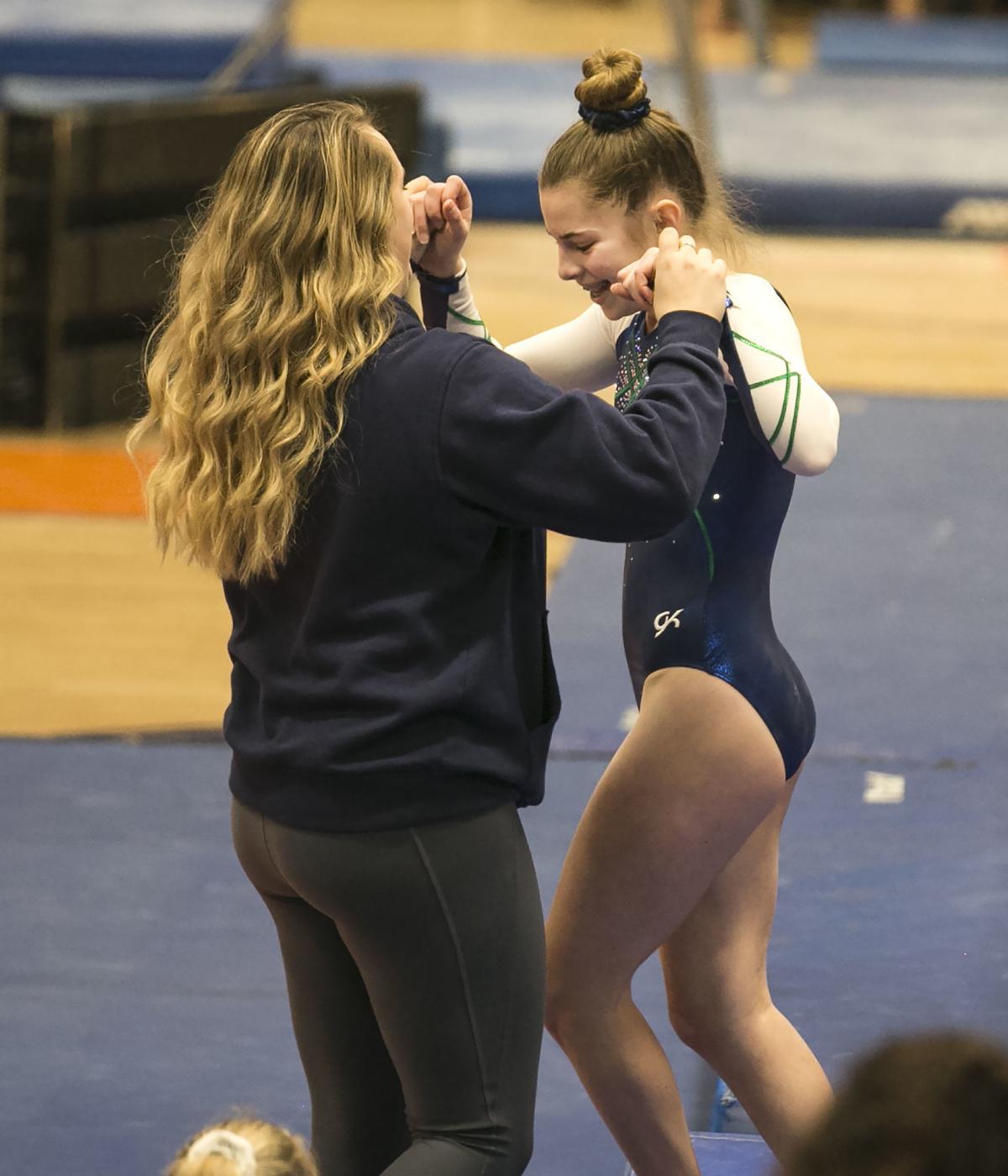 The Indians opened with a strong effort on floor exercise, posting three scores of 9.0 or better, and outdistanced the other four schools vying for the Region 5D title that was contested at the same time. At stake was a berth in the team competition at the state championships scheduled Feb. 21-22 at Patriot High School in Nokesville.

“I was a little nervous because it was my first time, but I think I did good overall,” said Eagle freshman Graceemae Murray, who recorded third- and fourth-place finishes on beam and vault, respectively, en route to a fifth-place showing in all-around.

Despite the low stakes, Murray and her teammates upgraded their routine’s skill level in preparation for Monday’s Region B that Colonial Forge will be hosting. “Definitely working on details: making the little things better. Overall, it all adds up,” Murray said of what the Eagles will be working to improve before their next meet.

Breana Spain was another key finisher for Colonial Forge, winning both the beam and floor exercise titles and was runner-up to Mountain View’s Zara Christophe in the all-around competition. Pretty good effort for a gymnast who needed the convincing of her mother beforehand to compete.

“I wasn’t going to compete at first but I’m really happy it worked in my favor,” Spain said. “I’m a little upset with my bars (scoring a 7.75), but accidents happen, you can’t control that. I came back strong in the other three events. I’m hoping that will push me (on Monday).”

Her 9.75 score on floor may represent a new school record, according to her coach.

Teammate Sophie Sterling overcame a fall off beams in warmups to make key contribution to the Eagles’ overall success. “My left leg is really a mess (and) I really did [consider not competing], but I really put in my head before the meet that I wanted to do this for my team and I didn’t want to let them down.”

Reflecting on capturing the district crown, Sterling said: “It validates our hard work this year and us working as a team.”

Eagles’ coach Maci Winebarger described the sophomore as “a fighter [who] pulled through for us a ton’’ after she managed to score an 8.65 on beam and then endured pain in her left leg and ankle to post an 8.675 on vault. “I had to fight through the pain and do it because was our last event: get it over with and finish strong,” Sterling said.

“We had a ‘not-so-great’ bar rotation, but they rallied back together and pulled off a great three events after that. So I’m really proud of them.”

Christophe was involved in an intense battle with Stafford’s Sophia Housand for the all-around title, but two falls off beam proved to be the undoing for the Indian gymnast. The Wildcats gymnast posted top-three finishes in three events and sparked Mountain View to a solid third-place finish behind Stafford.

“I’m proud how I did. I could have done a little bit better, but I did really good,” the junior reflected. “I tried really hard to get where I’m at right now. And I definitely am going to try to go up from here.”