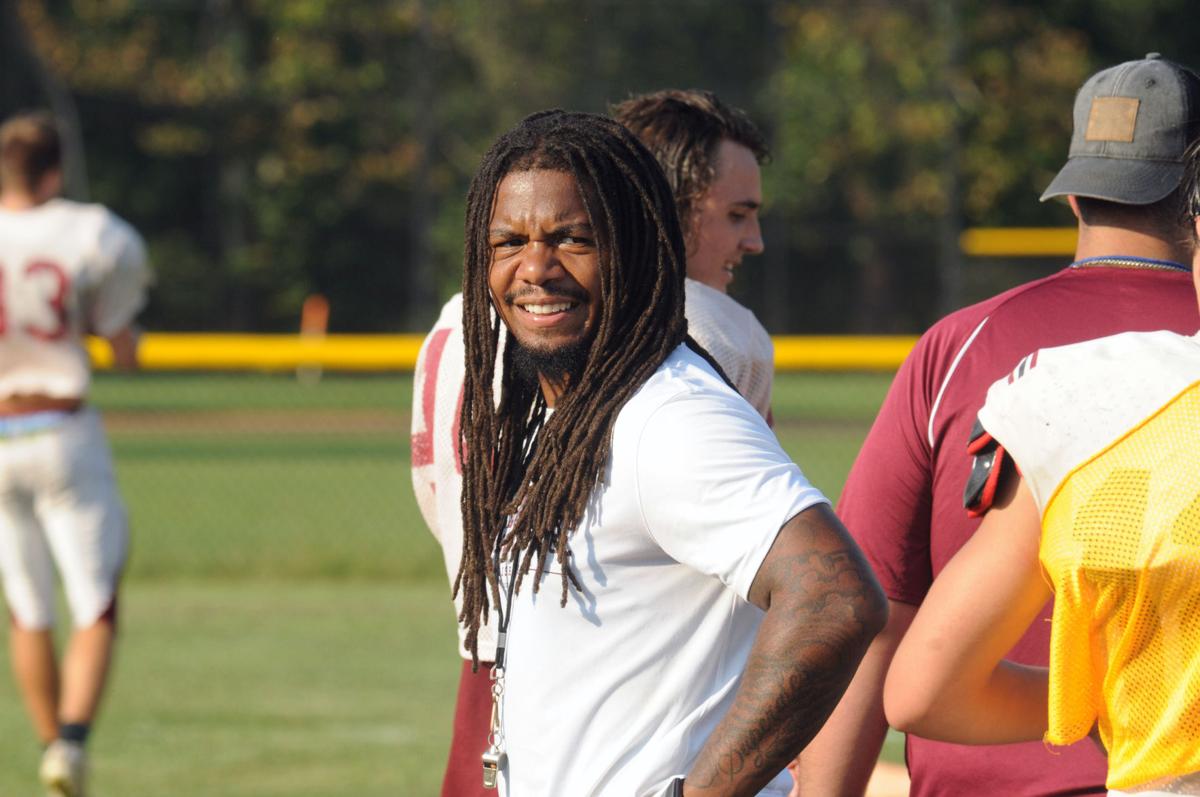 New Virginia Episcopal football coach Demetrious Tra Nicholson, a 2016 UVa graduate, speaks with players and coaches after practice on Monday, Sept. 9, 2019. Nicholson will lead VES into its first game of the 2019 season on Saturday against visiting Brunswick Academy. Photo by Ben Cates. 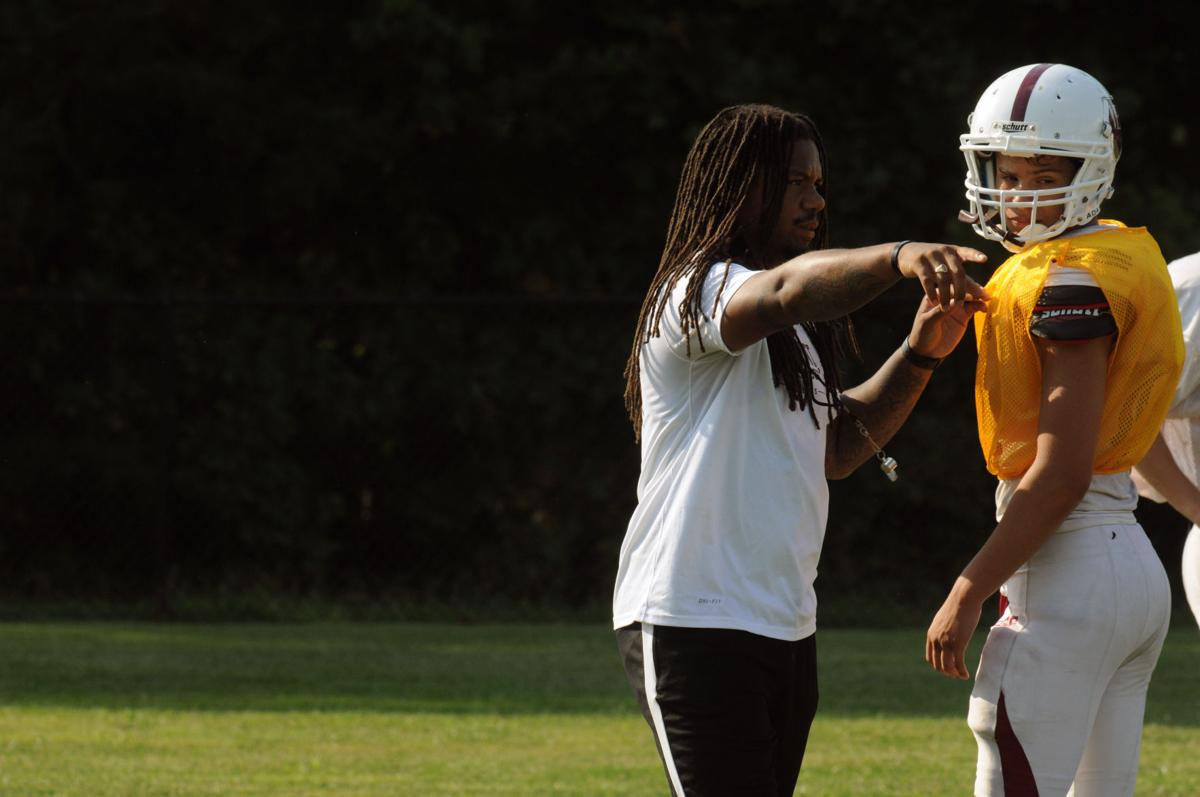 New Virginia Episcopal football coach Demetrious "Tra" Nicholson, a 2016 UVa grad, speaks with outside linebacker and safety Juan Pablo Nevarez during practice on Monday. Nicholson will lead VES into its first game of the 2019 season on Saturday against visiting Brunswick Academy.

New Virginia Episcopal football coach Demetrious Tra Nicholson, a 2016 UVa graduate, speaks with players and coaches after practice on Monday, Sept. 9, 2019. Nicholson will lead VES into its first game of the 2019 season on Saturday against visiting Brunswick Academy. Photo by Ben Cates.

New Virginia Episcopal football coach Demetrious "Tra" Nicholson, a 2016 UVa grad, speaks with outside linebacker and safety Juan Pablo Nevarez during practice on Monday. Nicholson will lead VES into its first game of the 2019 season on Saturday against visiting Brunswick Academy.

He gave each player an index card and asked them to write about a time they were forced to overcome adversity.

Nicholson, who goes by the nickname Tra, is a former University of Virginia standout cornerback who once garnered All-American honors. For the 26-year-old Bayside High School product and his players, the exercise was eye-opening.

“Once they started writing, it was like I turned the faucet on,” said Nicholson, who began coaching at VES on Aug. 1. He graduated from UVa in 2016 and has coached as an assistant at Bayside for football and at Salem High for track and field. “I didn’t know what I was gonna get from them. It helps me get to know them a lot more, too. I tell them I’ve only known them for a month, but I feel like I’ve known them all my life.”

Nicholson inherits a program that plays in the Virginia Independent Schools Football League, an organization comprised of eight schools that began last year as an offshoot of the Virginia Independent Schools Athletic Association. Teams in the VISFL play eight-man football rather than the tradition 11-man version. Nicholson takes over for another UVa grad, Danny Aiken, who coached the squad in 2018 but recently decided to step aside to spend more time with his family in Charlotte, North Carolina.

The index cards, on which Nicholson asked players not to write their names in case any information was sensitive, will serve another purpose this season.

The coach plans to share one or two before each game so VES players get to hear their teammates’ stories.

“A lot of times we’re out here running routes or pushing the sled and then we go to class,” the coach said at Monday’s practice. “But this creates a closer knit team and some camaraderie. I think it’ll teach them to have compassion and see some of the adversity each of them faces that we don’t get to see on a day-to-day basis.”

The new coach certainly knows about overcoming difficult situations. His mother, Elizabeth, gave birth to him when she was 12 years old. Not long after he was born, his father went to jail on a litany of charges and wasn’t released until Nicholson was at UVa.

It’s a story Nicholson can share with players as he begins his head coaching career, part of which he said is focused on helping “mold [players] into young men.”

“Show them that where I come from is different than where they come from, but we have a lot of similarities as far as adversity,” Nicholson said.

At Bayside, Nicholson was the 2010 Gatorade Player of the Year for Virginia, was ranked the 39th prospect in the nation on SI.com’s 247Sports’ Top 100 Recruits list and was an Under Armour first team All-American.

In his first season at UVa, he recorded 60 total tackles and appeared in 13 games, becoming a freshman All-American. His career with the Cavaliers spanned five years after he earned a medical redshirt as a junior.

The Bishops open the season Saturday at Pope Stadium against visiting Brunswick Academy. Kickoff is set for 2 p.m.

Nicholson said he and his wife Aqura already had planned to move to Lynchburg when Aqura’s cousin, VES assistant dean James “Trae” Watkins, told the couple VES’ head football coaching position was available. Nicholson was intrigued. He accepted the job not long before the Bishops began their preseason camp.

“Kind of stepped out on faith,” he said, “and I’ve been loving it since I got here.”

VES athletic director Bob Leake noted Nicholson has spent plenty of time in his office asking questions and getting to know more about the school.

“Man, he’s enthusiastic, charged up, and the boys love him,” Leake said. “These guys just take to him. When they beat him on a pass play, because he was a defensive back, they’re talking smack and he’s grinning from ear to ear.”

VES’ schemes in 2019 will differ depending on the opponent. Fans may see the Bishops in spread formations one week and in tighter option-based formations the next.

Eight-man football typically eliminates a skill player and two offensive tackles on offense and defensive backs, lineman or linebacker on defense. VES is beginning its second year in the VISFL.

Nicholson said the concept of eight-man football is challenging, especially on the defensive side. Scores are typically higher, because the elimination of key defensive positions allow running backs and speedy receivers to get free more easily.

And while there is plenty of time for practice and lifting weights and watching film, Nicholson is focused also on building character. Hence the index cards.