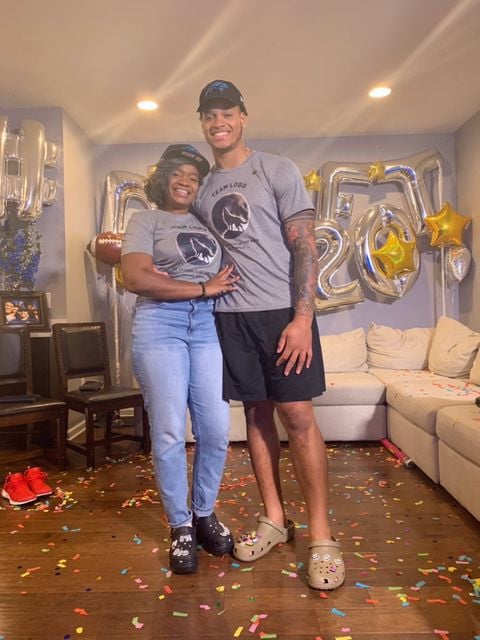 Yetur Gross-Matos poses with his mom Sakinah after being drafted by Carolina. 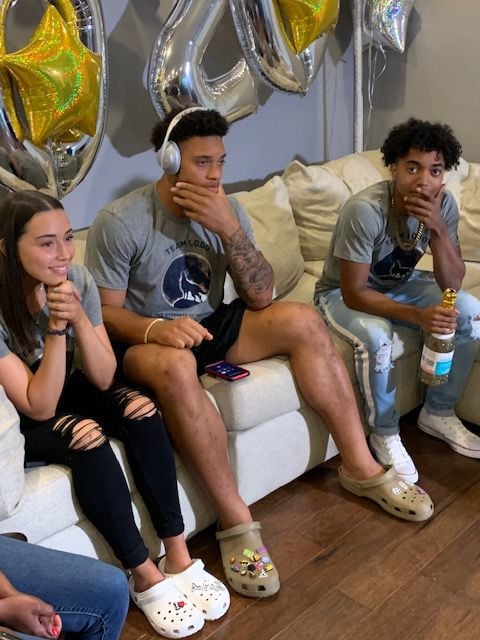 Yetur Gross-Matos poses with his mom Sakinah after being drafted by Carolina.

Just hours before the NFL Draft on Thursday afternoon, Yetur Gross-Matos was in an open field in Spotsylvania County performing defensive end drills.

The Chancellor High School product was projected to be a first-round pick by many online publications, and his family was preparing for a draft party.

But Gross-Matos wasn’t basking in what was expected to take place hours later.

“This is why this young man will soon realize his dream,” his father, Rob Matos wrote on Twitter. “Although this could be the biggest day of his life, it hasn’t stopped him from getting his work in.”

The Carolina Panthers will welcome that work ethic into their franchise. Carolina selected Gross-Matos in the second round (38th overall) Friday night.

Gross-Matos fell short of becoming the first player from the Fredericksburg area to be selected in the first round but is still the highest drafted player ever to hail from the region.

Former Spotsylvania High and University of Maryland running back Steve Atkins was previously the highest drafted player from the area. Atkins went in the second round (44th overall) to the Green Bay Packers in the 1979 draft.

On ABC’s broadcast, Gross-Matos said that he was feeling a bit uncertain after not being drafted on Thursday.

He and his family reacted jubilantly to the call from the Panthers as his parents, siblings, girlfriend and trainer embraced him.

Gross-Matos said he was emotional because he also thought about his biological father, Michael Gross, who died in a boating accident trying to save him as a toddler and his older brother, Chelal Gross-Matos, who was fatally struck by lightning at age 12 during a weather delay at a Spotsylvania County Little League baseball game.

“I feel them with me in everything that I do, but especially in that moment in that call [from the Panthers],” Gross-Matos told ABC. “I knew they were with me and I couldn’t have done this without them.”

Gross-Matos becomes the second Chancellor player to be drafted, joining former offensive lineman Darnell Alford, who was taken in the sixth round (188th overall) by the Kansas City Chiefs in the 2000 draft.

He joins a Panthers’ team that also selected Auburn defensive tackle Derrick Brown in the first round in an attempt to rebuild a defense that allowed a franchise-worst 29.4 points per game in 2019.

“They’re getting a strong, physical individual that they’re going to pair with Derrick Brown and they’re going to bring the pain to everybody in the NFC South, I can guarantee you that,” ESPN analyst Louis Riddick said of the Panthers. “[Gross-Matos] is a guy who really just plays heavy-handed at the point of attack and he really has slippery pass rush ability. He’s not the fastest and he’s not the most powerful, but he’s a great combination of both.”

Panthers first-year head coach Matt Rhule is a Penn State alum who offered Gross-Matos a scholarship in 2015 when he was the head coach at Temple University.

Gross-Matos was one of 58 players selected by the NFL to have his draft party livestreamed. The draft was set to take place in Las Vegas before the coronavirus pandemic changed plans.

All interviews with national media outlets were conducted from his home. Livestreaming equipment, including microphones, tripods and two iPhones were mailed to him.

Gross-Matos orally committed to Penn State during his junior year at Chancellor. He finished his high school career as the Chargers’ all-time leader in sacks with 37 (18 ½ as a senior).

He impressed his teammates and coaching staff as a true freshman at Penn State and earned a minor role in his initial season.

He returned as a sophomore and was forced into the starting lineup because of injuries. He blossomed and finished with 54 tackles (20 for loss) and eight sacks. That season, he also became the 11th player in school history to record at least 20 tackles for loss.

Gross-Matos was steady his junior season. He recorded 40 tackles and 9 ½ sacks. He finished his Penn State career with 19 sacks, which ranks 10th in school history.

In 2019, he was a semifinalist for the Bednarik Award, which is presented to the nation’s top defender. He was a Sporting News midseason All-American and was named first-team all-Big Ten two straight seasons.

Yetur Gross-Matos: the call that changed everything