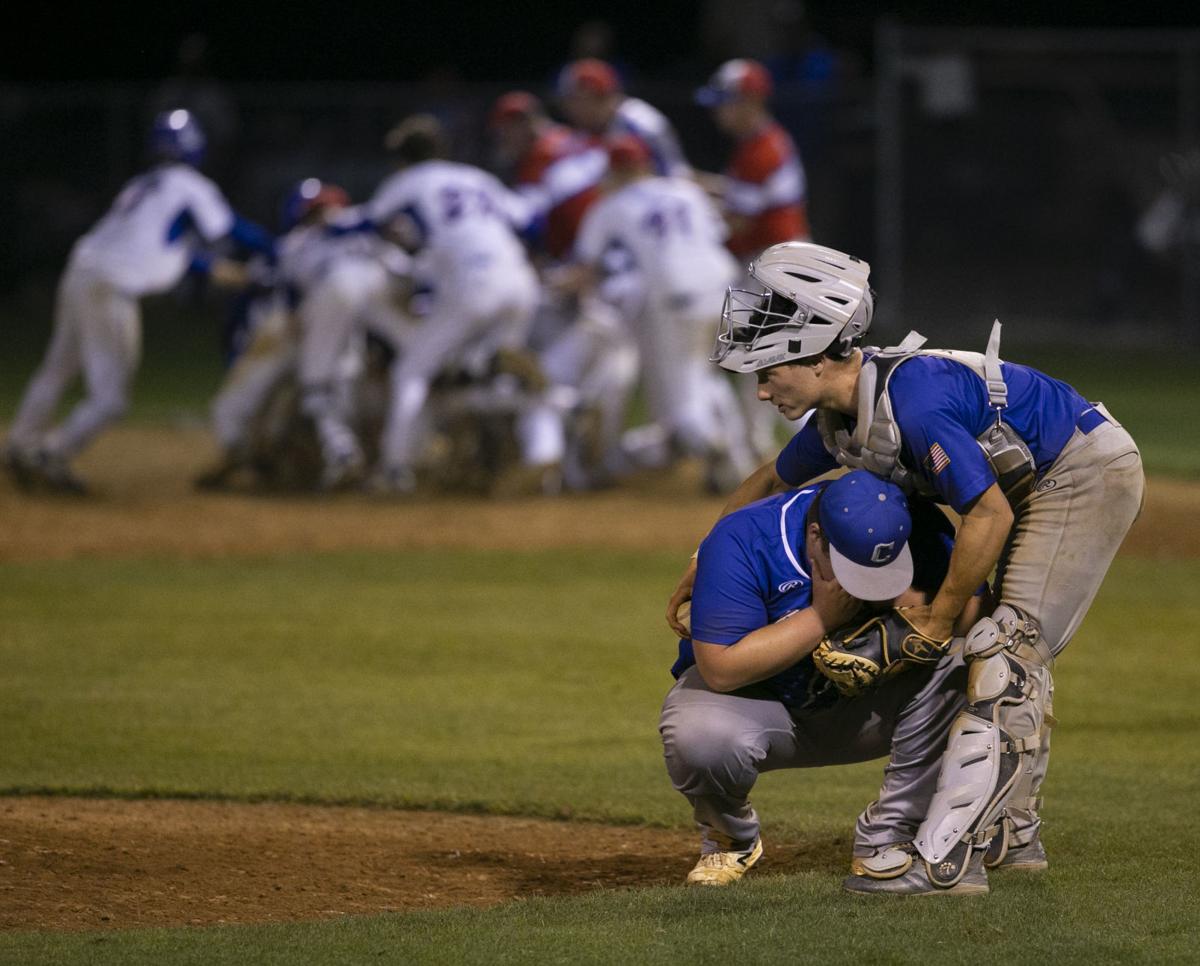 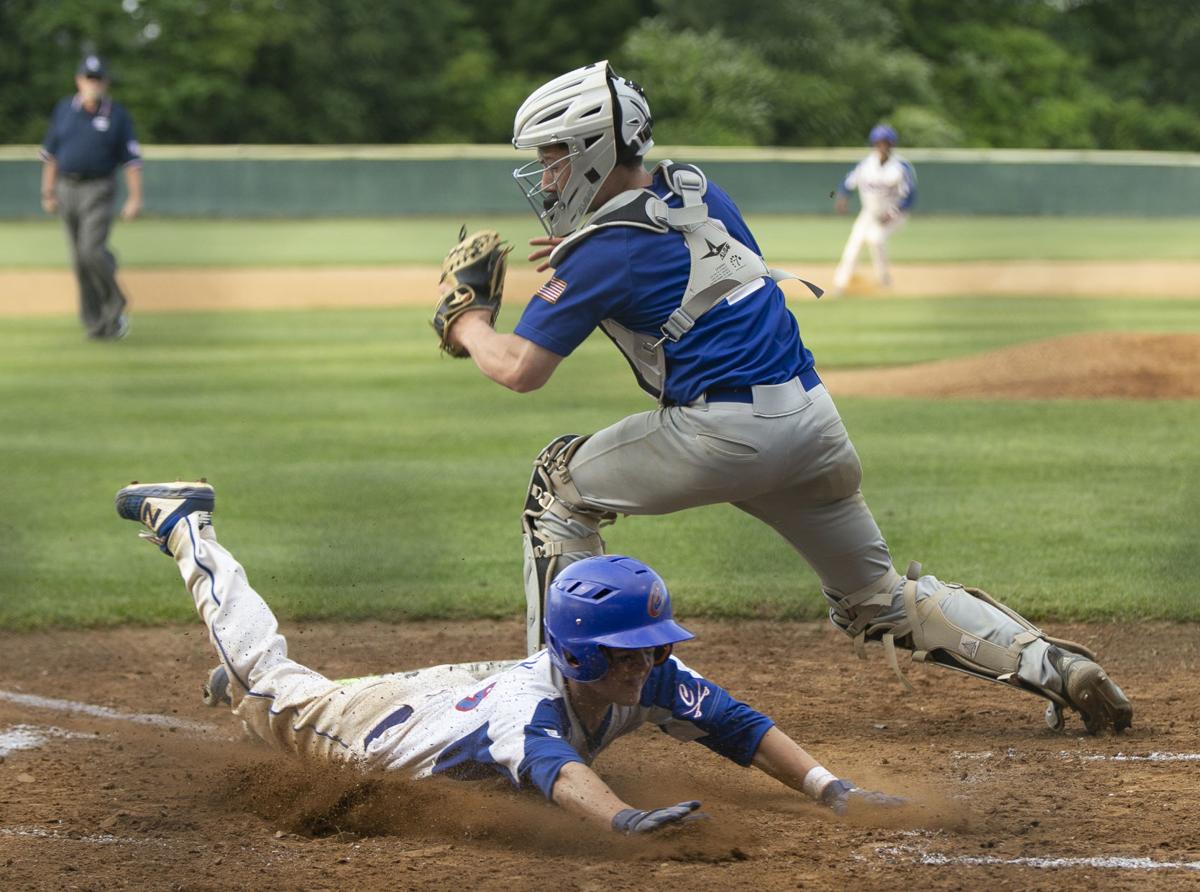 Caroline’s Bryan Kovach slides into home for the Cavaliers’ first run of the day against Courtland. 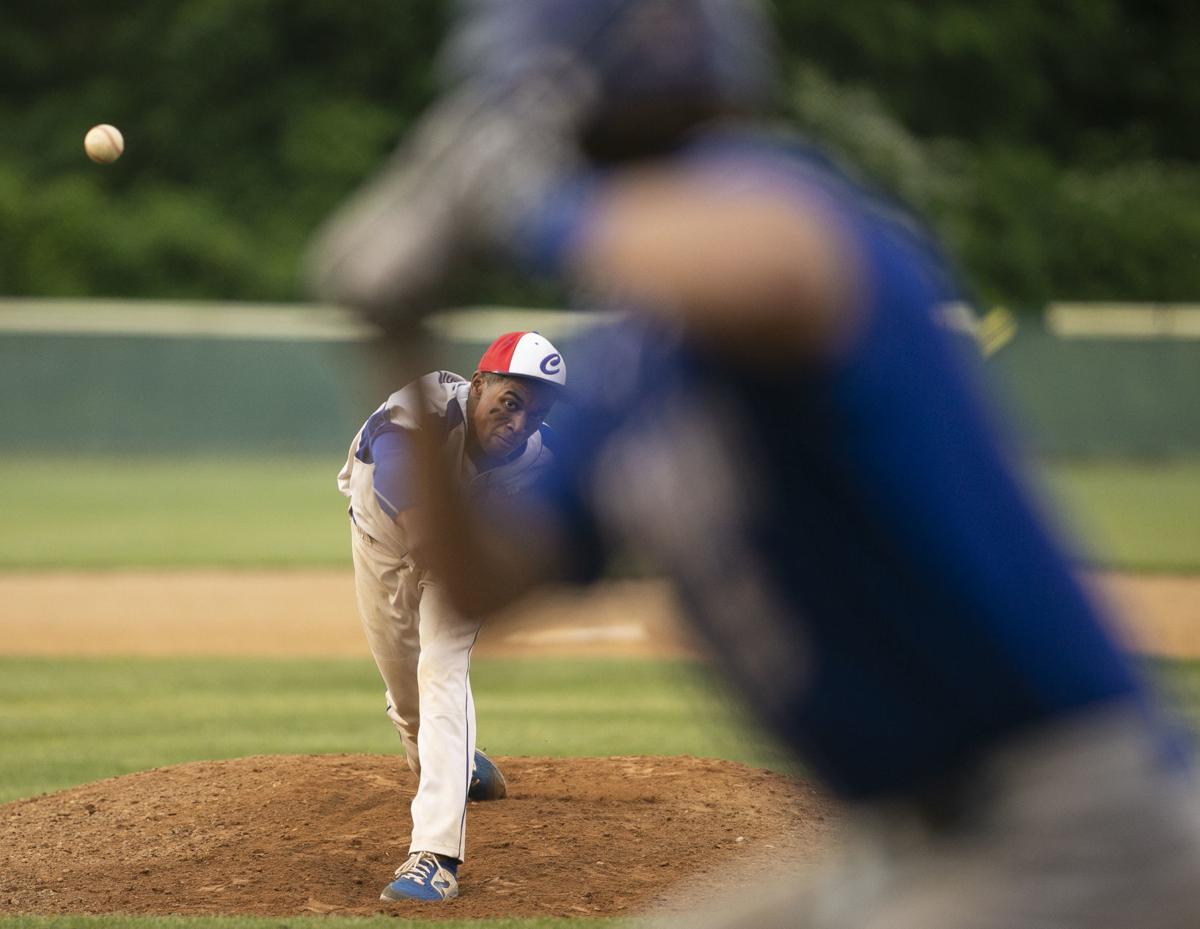 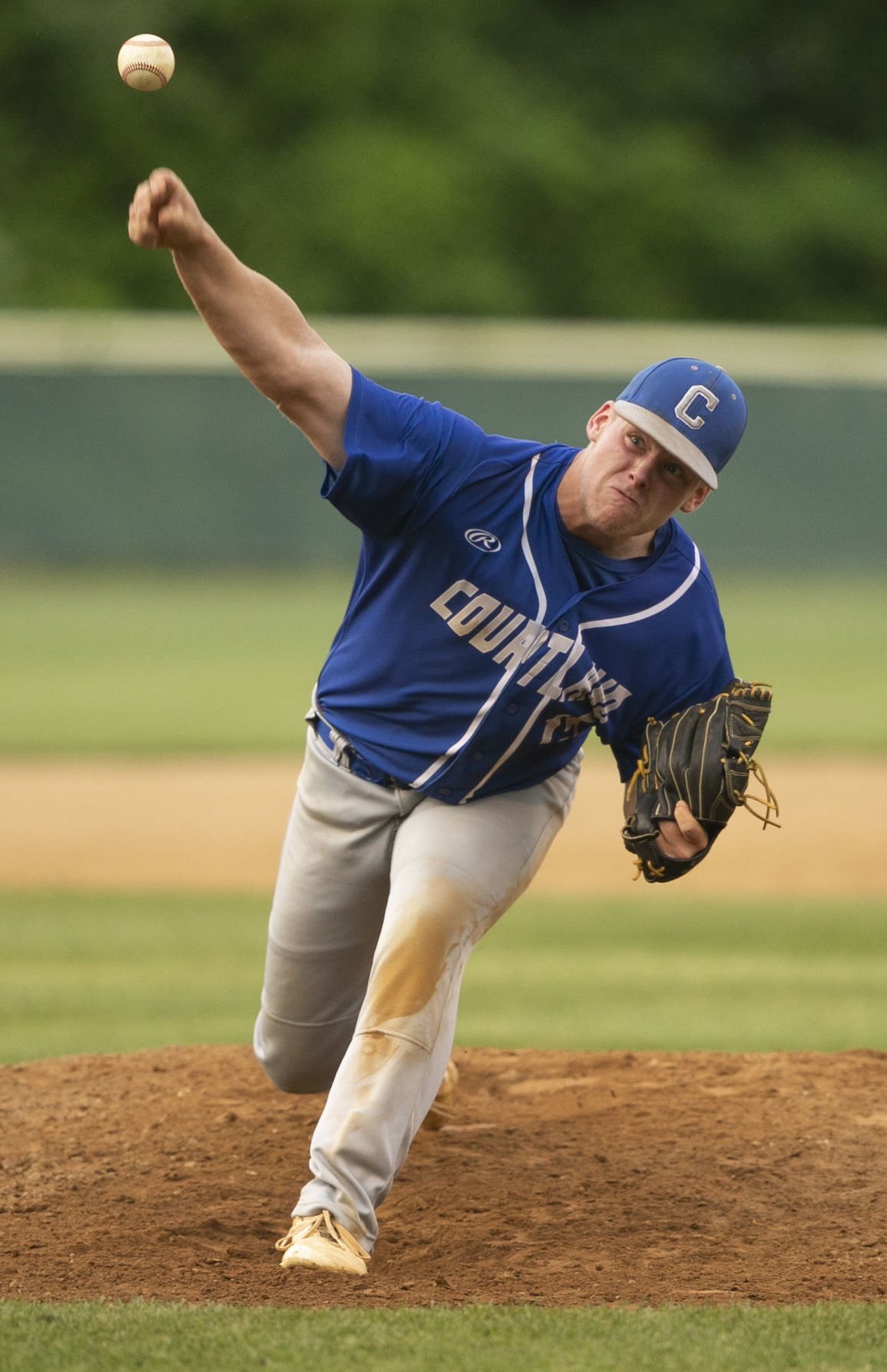 Courtland's Ty Lowe pitches against Caroline during the Battlefield District baseball championship in Bowling Green, Virginia on May 16, 2019. Caroline won 5-4 in extra innings. 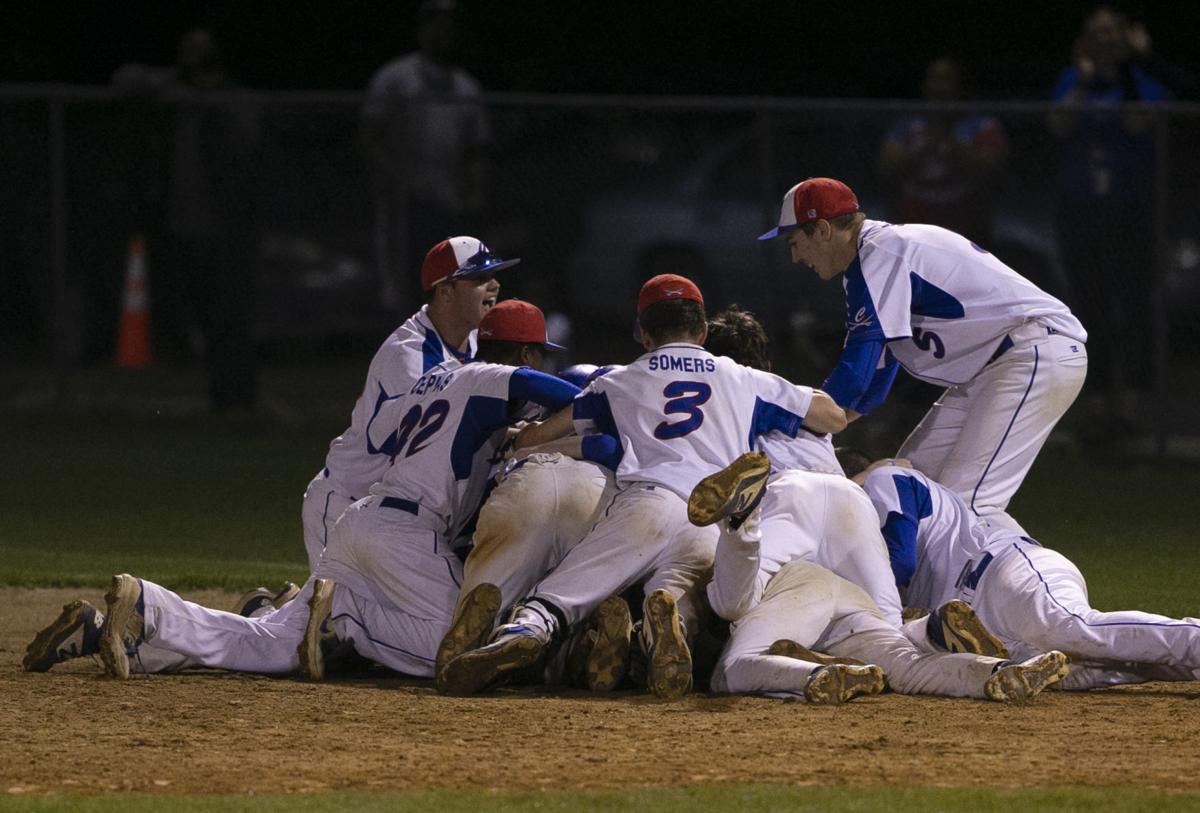 The Caroline Cavaliers celebrate their 5-4 win over Courtland for the Battlefield District baseball championship in Bowling Green, Virginia on May 16, 2019.

Caroline’s Bryan Kovach slides into home for the Cavaliers’ first run of the day against Courtland.

Courtland's Ty Lowe pitches against Caroline during the Battlefield District baseball championship in Bowling Green, Virginia on May 16, 2019. Caroline won 5-4 in extra innings.

The Caroline Cavaliers celebrate their 5-4 win over Courtland for the Battlefield District baseball championship in Bowling Green, Virginia on May 16, 2019.

Caroline sophomore Joseph Garner was still internally fuming when he stepped to the mound with two outs in the top of the 10th inning in the Battlefield District baseball tournament championship game Thursday night.

A baserunning gaffe by Garner ended the previous inning as he was caught in a rundown between second and third on a single by Seth Shannon that could’ve set the home-standing Cavaliers up to score the game-winning run against district rival Courtland.

Garner was called upon to pitch despite throwing less than 10 innings all season.

Caroline ace John Chapman had exhausted the 110-pitch limit that’s enforced by the Virginia High School League, so it was on Garner to sit down Courtland leadoff batter Trevor Ferares.

“When I was on base, I was really aggressive trying to take third and it didn’t work out so well,” Garner said. “I was upset about that. So I just threw everything I had. I knew if I was able to get an out there we had a good chance to win.”

Garner struck out Ferares looking and the Cavaliers scored the winning run in the bottom of the 10th to earn a heart-stopping 5–4 victory and their first district tournament title since 2001.

Chapman drew a two-out walk on a 3–2 pitch from Courtland’s Jakob Glunt to score Lucas Chinault and set off a celebration by the Cavaliers, who formed a dogpile at first base as they basked in head coach Frank Dow’s first district title in his 13 years at the helm.

Chapman said the first two offerings from Glunt “I wanted to crush,” but he refrained after getting a take sign from Dow.

“We’ve been working really hard ever since November,” Garner said. “To see all that working finally paying off is great … Now we’re going to move on and see what we can do at regionals.”

After their third win over the Cougars this season, the Cavaliers (14–6) have earned the No. 2 seed in the Region 4B tournament and will host a quarterfinal contest next Thursday. Courtland (12–8) is the No. 4 seed and will also host next Thursday.

The Cougars recorded 12 hits and had some late game heroics from standout pitcher Ty Lowe, who replaced Cole Ely in the bottom of the third and didn’t leave until he reached 103 pitches entering the bottom of the 10th.

Lowe recorded eight strikeouts as he kept the Cavaliers at bay after they built a 3–1 lead in the first two innings.

“He’s got lockdown stuff,” Courtland head coach Tim Acors said. “He can become unhittable at times. I wanted to see how much we could get out of Cole. We were behind and I knew Ty wasn’t going to give up much more. We were able to keep it close.”

The Cougars kept it close long enough before they pounced in the top of the seventh. They were trailing 3–2 entering the frame, but Lowe delivered a two-run double to leftfield to give Courtland its first lead of the night, 4–3.

But the Cavaliers weren’t done. After Bryan Kovach led off the bottom of the seventh with a walk, Chapman followed with a bunt single. Kyle Tingen was given a free pass to load the bases with no outs. Kovach scored on a fielding error by Courtland at third base to tie the game at 4. Lowe escaped the jam with three strikeouts.

Still, the Cavaliers had new life.

“We have no quit. We always play,” said Caroline’s Toby Somers who started the game at pitcher and ended at catcher. “We always fight no matter what the circumstances are.”

Chapman, who replaced Somers in the top of the fourth, continued to trade blows with Lowe in the eighth and ninth innings before both were forced to sit in the 10th.

The difference may have been that Chapman was able to get two outs in the top of the 10th before he was removed after walking Dustin Gough.

That’s when Garner stepped in against Ferares.

“We were down to two kids there and I just felt that Joe cold come in there and get them,” Dow said. “He was the right guy in the right spot. Our coaches try to make the right decisions and this year it’s just worked out.”

"We’ve been working really hard ... To see [it] finally paying off is great."