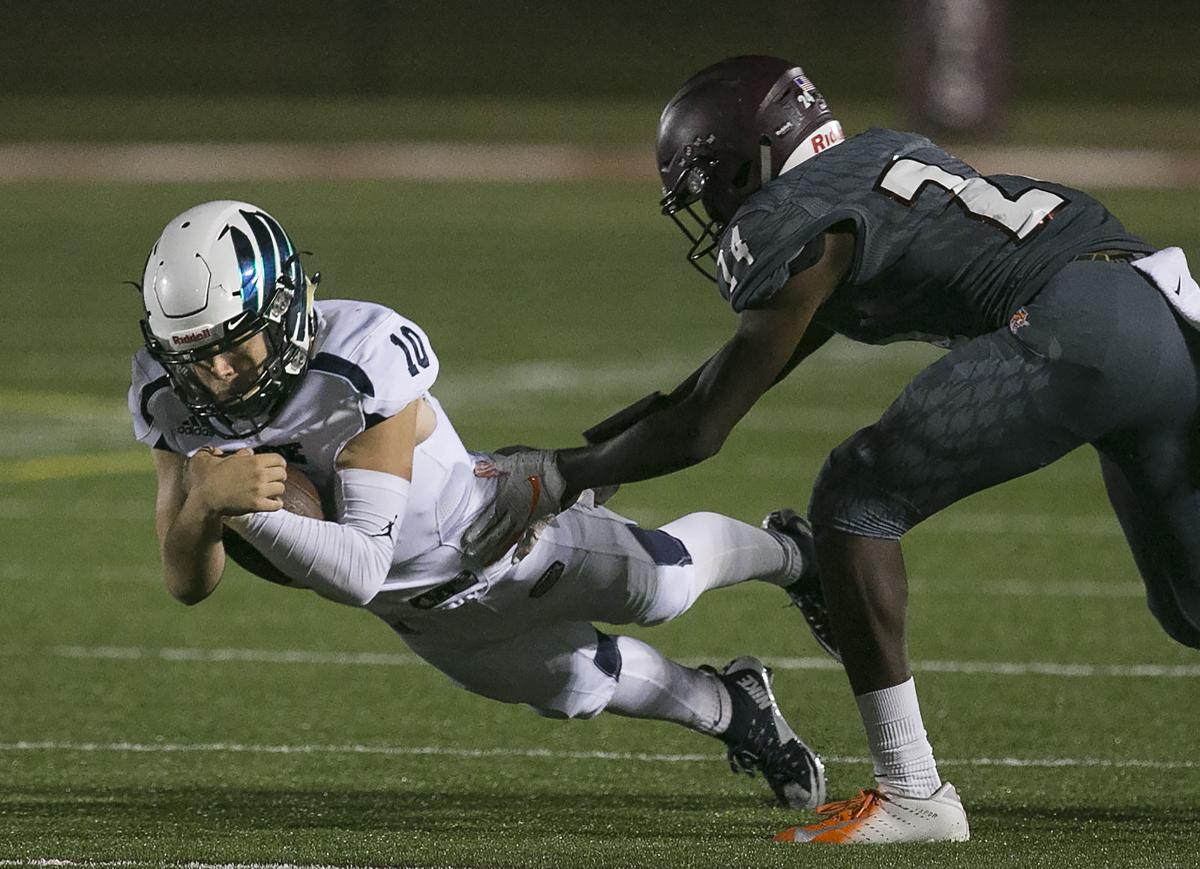 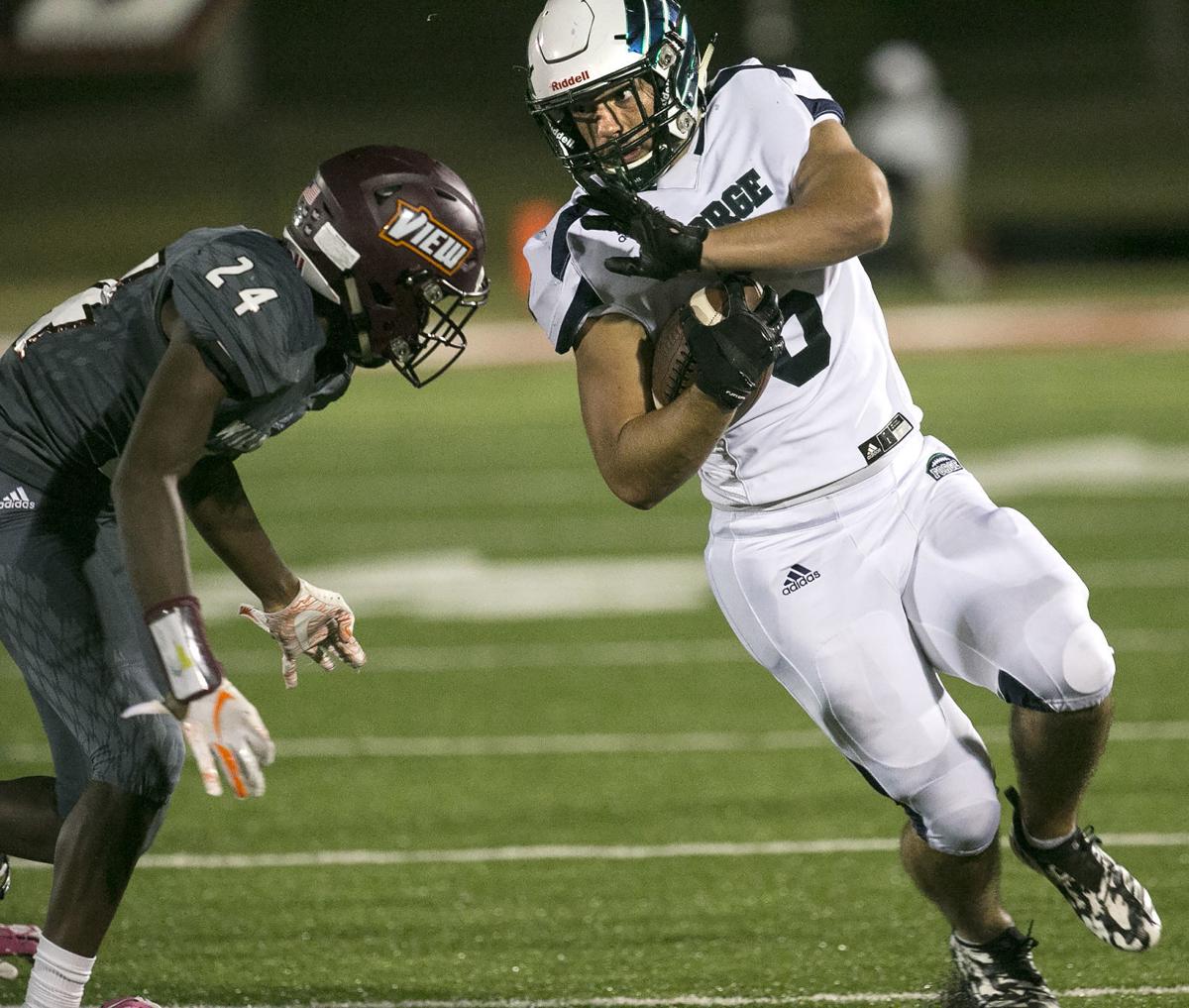 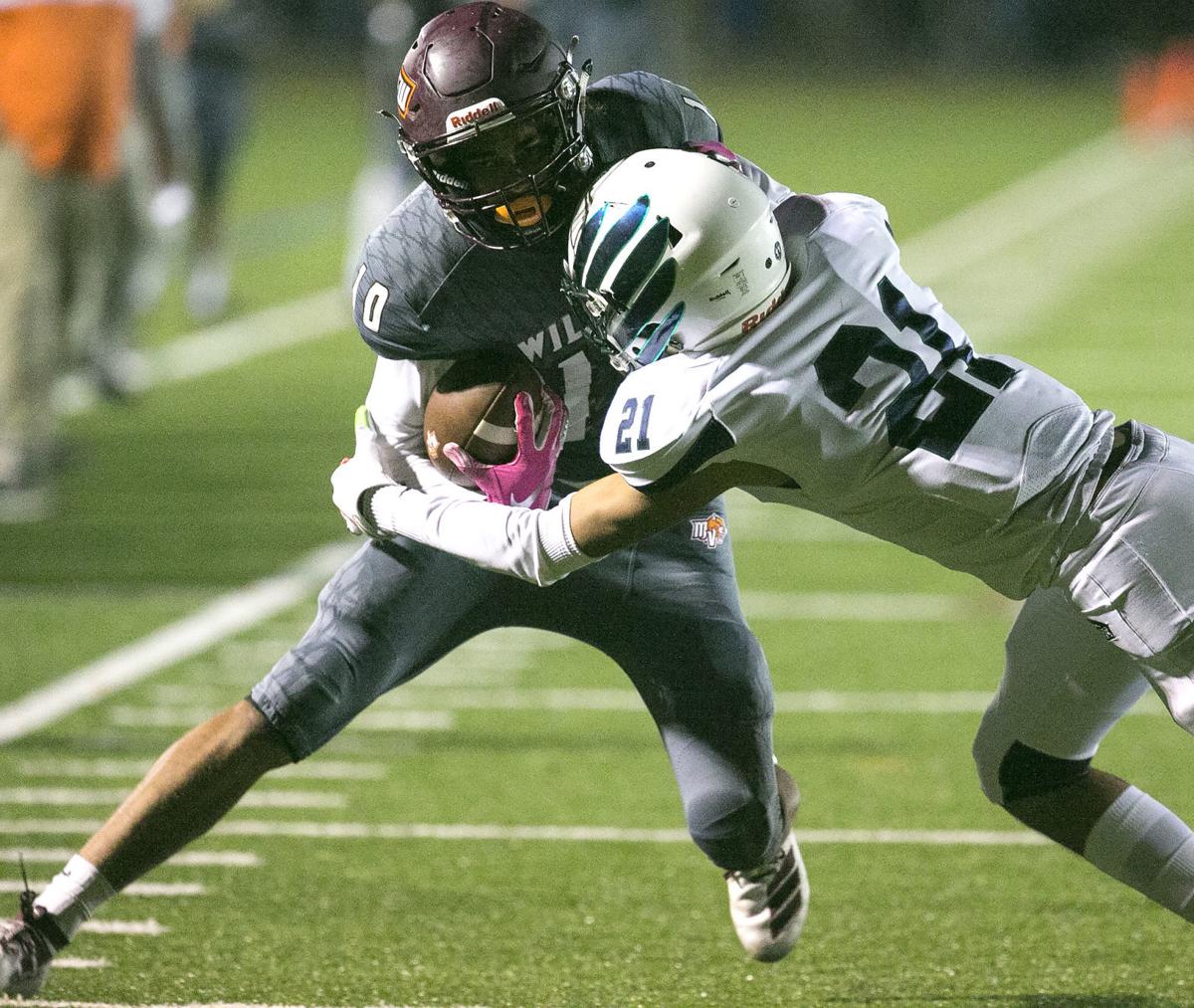 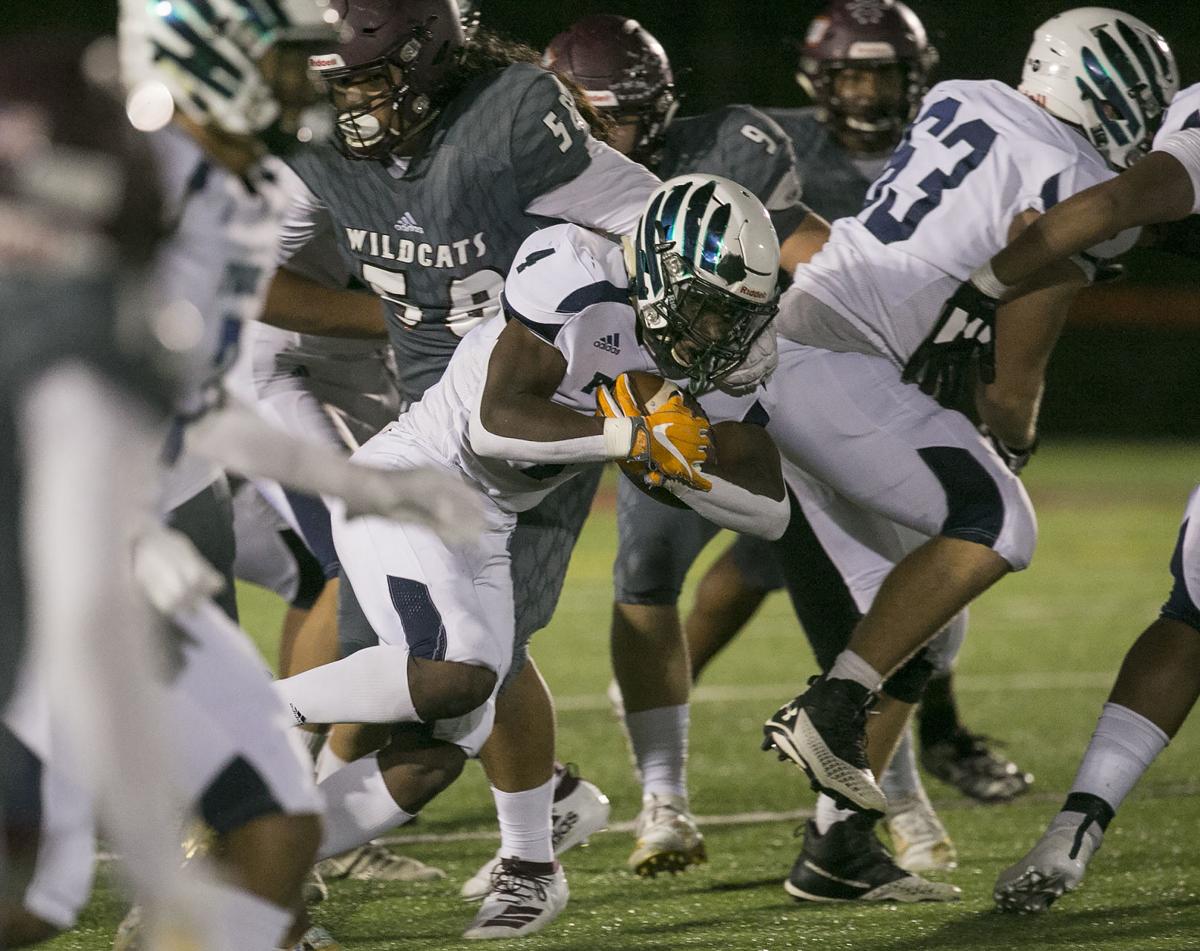 Jamal Thomas (center) of Colonial Forge picks his way through a crowded field at Mountain View on Friday, Oct. 11, 2019. 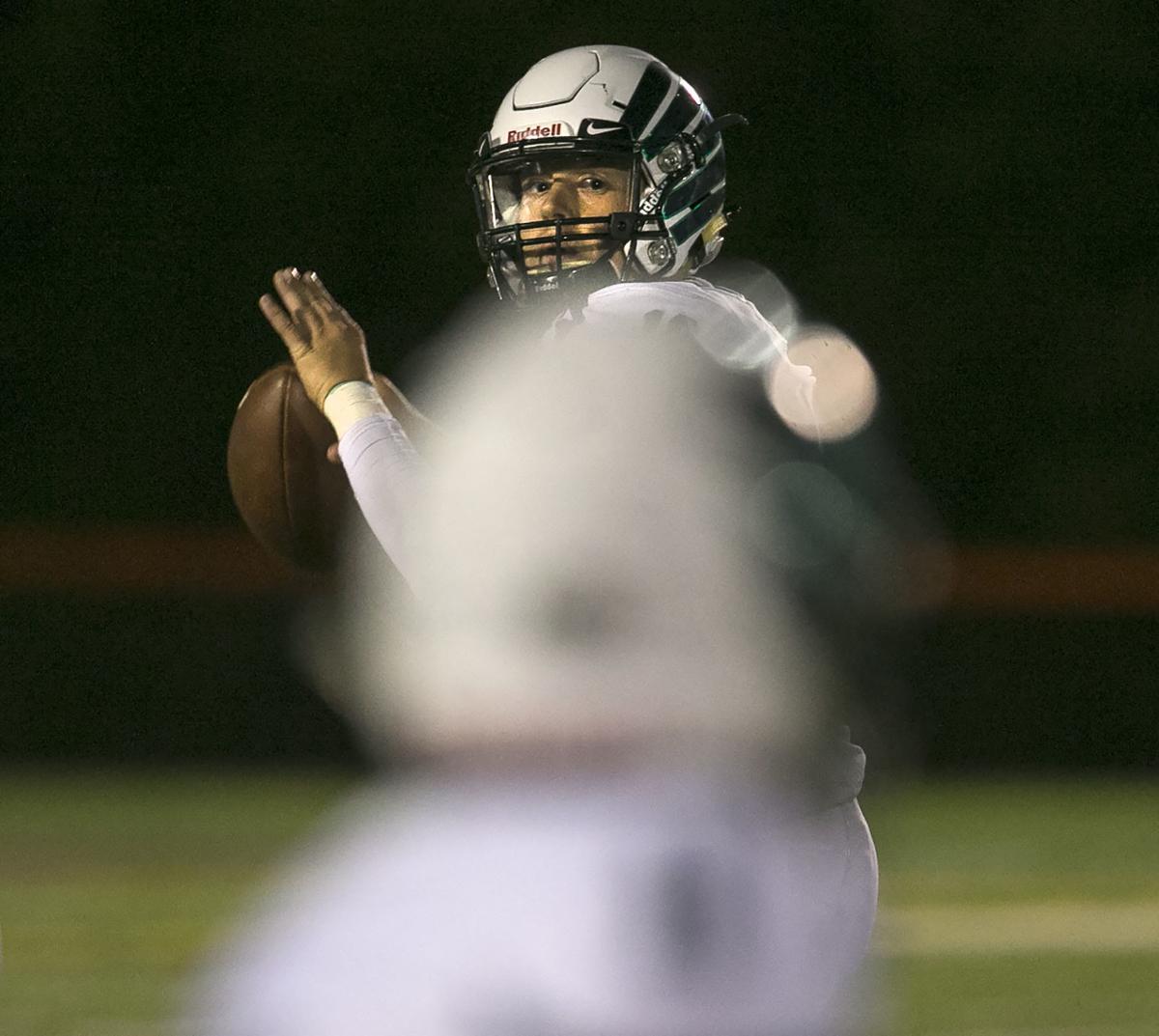 Jamal Thomas (center) of Colonial Forge picks his way through a crowded field at Mountain View on Friday, Oct. 11, 2019.

Colonial Forge’s senior short-yardage back had already scored two touchdowns in Friday night’s game at Mountain View. When the Eagles took possession with 3:17 remaining and a four-point lead, Kauthen simply wanted to pick up a first down—something his team had yet to accomplish in the second half.

Instead, with the previously unbeaten Wildcats crowding the line of scrimmage, Kauthen burst through the left side of the line and dashed 67 yards for the clinching score in the Eagles’ hard-fought 24–13 Commonwealth District victory. All three of his scores on the night came on runs to the left side, following tackle Chase Harley and guard Mason Rega.

“They trust me with the ball, and I appreciate that,” Kauthen said. “We had an opportunity to kill the clock. I saw an open hole and got some great blocks.”

Kauthen’s final sprint helped the Eagles (5–1, 3–0) win a game that they dominated statistically in the first half, only to see the Wildcats (6–1, 2–1) claw their way back after halftime.

At the break, Colonial Forge had amassed 18 first downs to the Wildcats’ one and had nearly tripled Mountain View’s total yardage (255 to 96)—but held only a 14–-7 lead, thanks to two short touchdown runs by Kauthen.

“If you’d told me we’d be down seven, yeah, I’d say we were fortunate,” Mountain View coach Lou Sorrentino said. “We kind of weathered the storm.”

The tempest worsened a bit when the Wildcats failed to handle the second-half kickoff, giving Colonial Forge the ball at Mountain View’s 28. A.J. Gordon countered that by intercepting Eagles quarterback Madden Lowe, just as James Sullivan had done on Colonial Forge’s first possession of the game.

Elijah Sarratt’s 34-yard punt return set up Phillip Lovelace’s 26-yard field goal for a 17–7 lead, but the Wildcats cut it to 17–13 on a 10-yard touchdown pass from Ware to Darius Crouch late in the third quarter.

It stayed that way until Kauthen’s final run with 2:17 remaining, despite a couple of defensive penalties on the Eagles and a punt that the Wildcats recovered in Colonial Forge territory after it was ruled to have bounced off return man Avery Johnson–Edmonds’ leg.

Johnson–Edmonds responded with an end-zone interception of Ware, and Lovelace later boomed a 61-yard punt to the Mountain View 10.

Both teams have lofty postseason ambitions but are in the midst of challenging portions of their schedules. Colonial Forge faces Commonwealth contenders North Stafford and Massaponax over the next two weeks, then hosts four-time defending Class 5 state champion Highland Springs.

“I’m proud of the guys, but we’re our own worst enemy sometimes,” Eagles coach John Brown said. “If we keep making mistakes against good teams, we’ll dig ourselves a hole we can’t climb out of. We have to fix that.”

Mountain View, which fell short of the first 7–0 start in school history, beat North Stafford next week and visits Massaponax next Friday.

“We’re disappointed; we never like to lose,” Sorrentino said. “But hopefully our guys will look at it as, we left a lot of football out there. As long as our guys stay together, we can still reach a lot of our goals.”

Colonial Forge travels to Mountain View to face the Wildcats on Friday, Oct. 11, 2019.

I saw an open hole and got some great blocks.

Colonial Forge travels to Mountain View to face the Wildcats on Friday, Oct. 11, 2019.