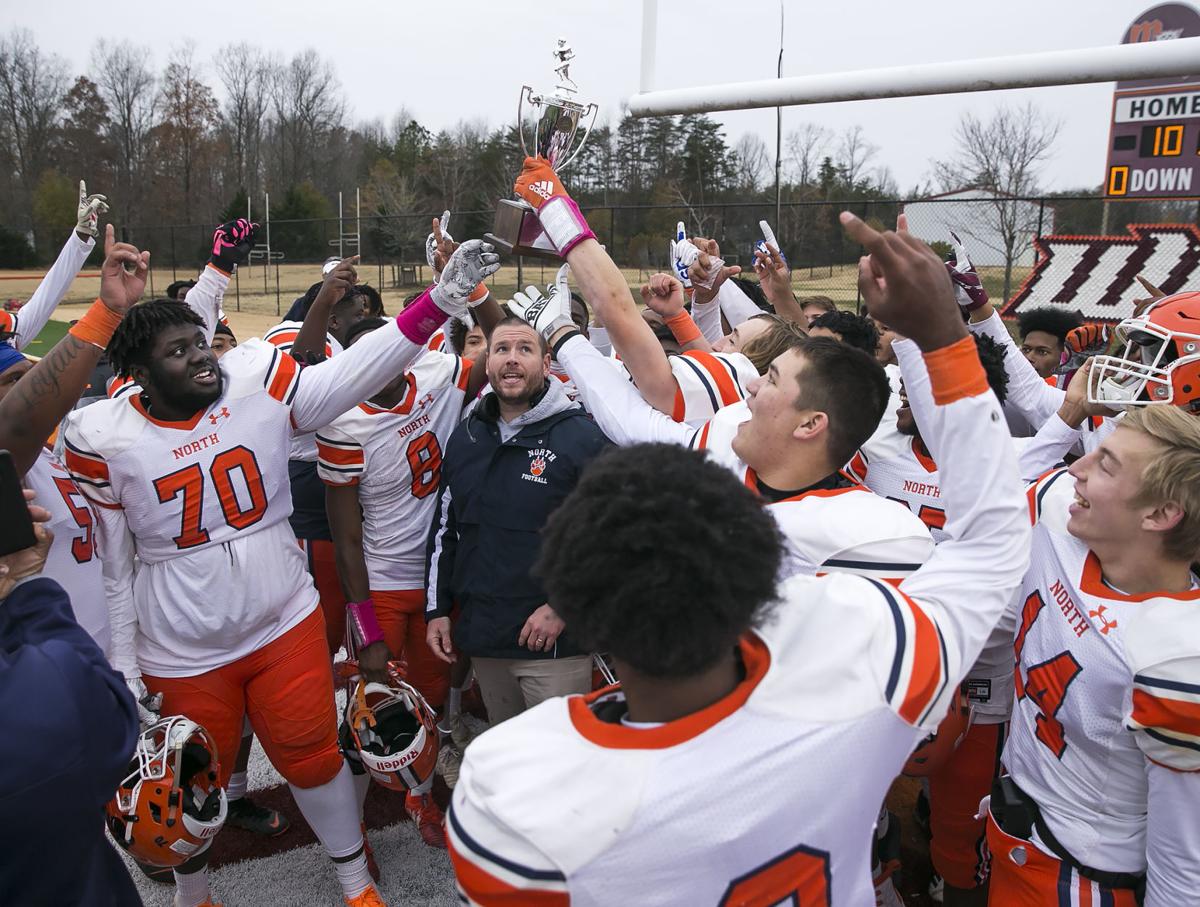 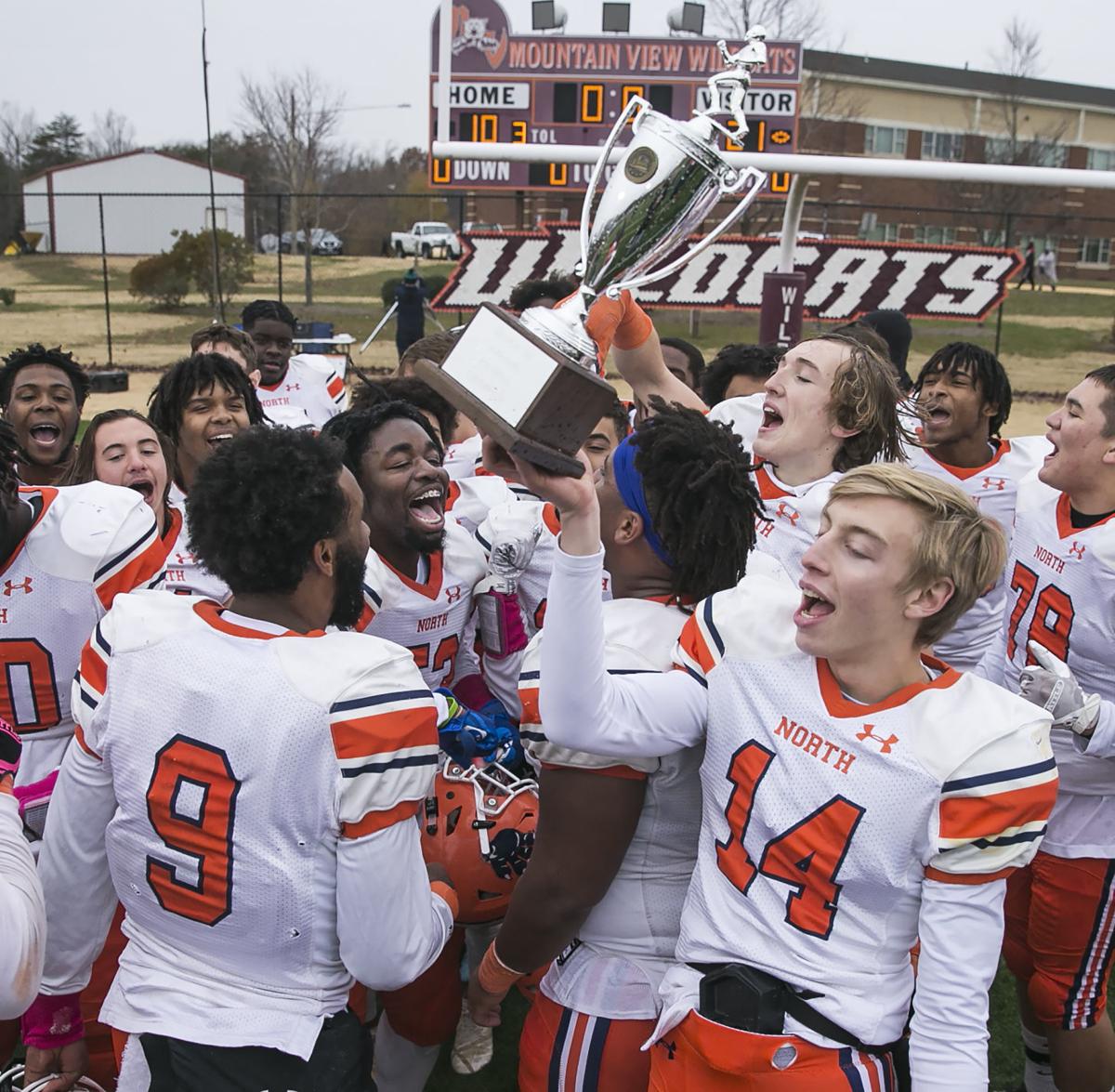 The Wolverines of North Stafford celebrate their 21-10 victory against Mountain View in the Region 5D football championship at Mountain View on Saturday, Nov. 30, 2019. 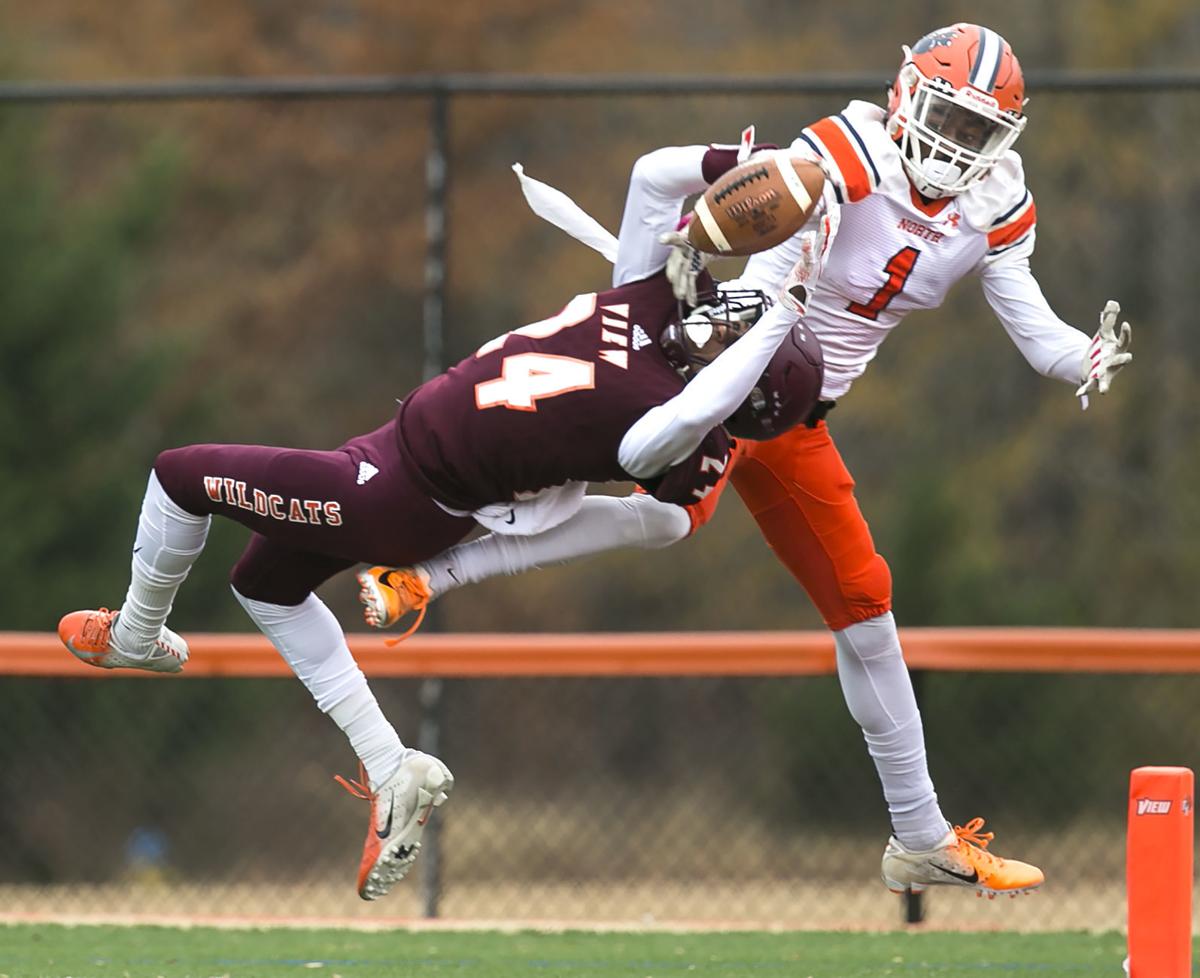 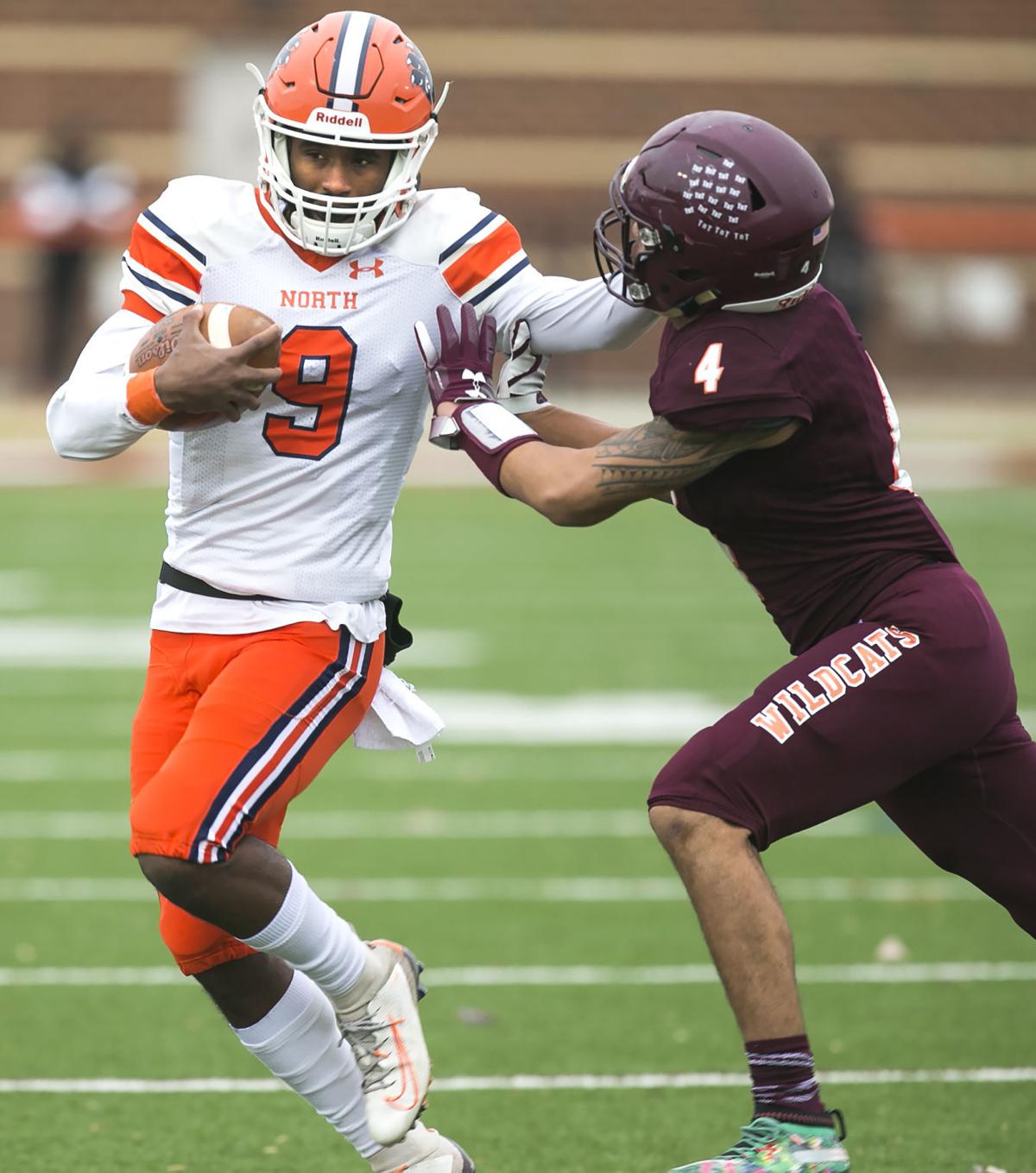 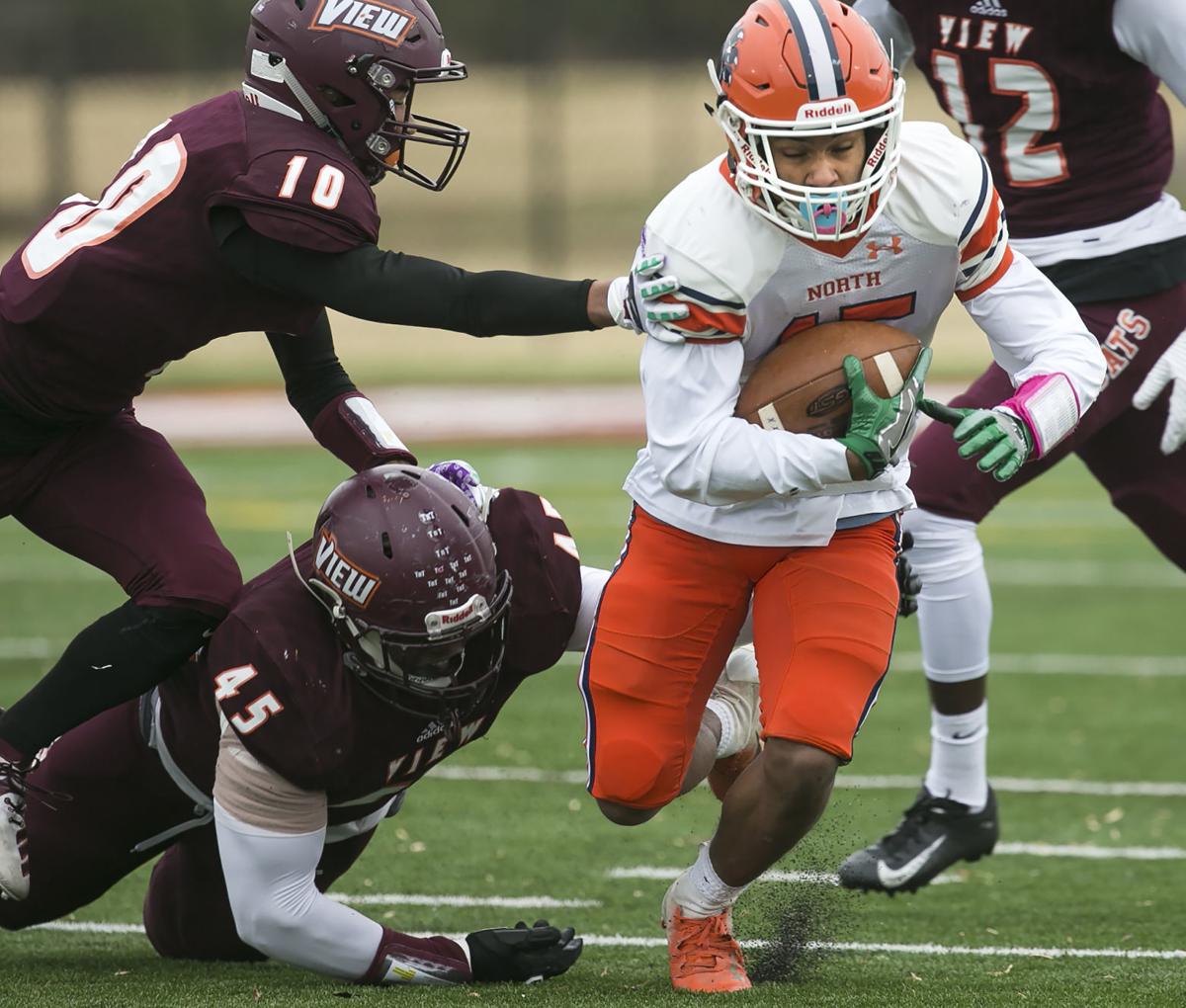 The Wolverines of North Stafford celebrate their 21-10 victory against Mountain View in the Region 5D football championship at Mountain View on Saturday, Nov. 30, 2019.

Quarterback Jamir Boyd says the North Stafford football team has had only one goal all season—to make it back to the state playoffs.

After Saturday’s hard-earned 21–10 victory over top-seeded Mountain View in the Region 5D title game, Boyd and the Wolverines have achieved that goal. Now they’re ready to move on.

“We didn’t really care about districts. Our only goal has been to get back to the state tournament,” said Boyd, who threw for 337 yards and tossed three touchdown passes to lead the way against the Wildcats.

Next week, the Wolverines (9–4) will get a chance to take the next step in their quest for a state championship under coach Neil Sullivan when they travel to perennial regional power Stone Bridge. It will be the second straight year the Wolverines and Bulldogs have met in the state semifinals.

“We’re looking forward to next week,” said Sullivan. “Stone Bridge is really physical and they’re going to be ready. We’re going to have to be physical as well and match their intensity. That’s their brand, their MO.”

In Saturday’s regional championship contest, the intensity level was high for both teams on a cold, cloudy afternoon.

North Stafford dominated play for much of the game, but had trouble finding the end zone against the host Wildcats (10–3), who bent but did not break in the early going.

Led by the passing of Boyd, who completed 14 of 21 passes for 192 yards in the first half, the Wolverines ruled the statistics and marched up and down the field in the first two quarters, but they had just a 7–3 lead at the intermission to show for their efforts.

Their only score came with 28 seconds left until halftime after Mountain View had pulled in front in the first quarter on a 33-yard field goal by Patrick Carroll.

Boyd completed six passes in an 80-yard drive that culminated with a 13-yard strike to Javon Swinton. It was the first of two touchdowns for Swinton, who also scored on a 29-yard reception in the third quarter.

“You just have to get open and [Boyd] is going to find you,” said Swinton. “This team has stayed together and stayed true to each other, and it showed. That’s why we’re going to the state semis.”

One of the Wolverines’ early drives nearly ended in disaster. Wildcats defensive back Darius Crouch intercepted Boyd and returned it the length of the field for an apparent touchdown. The score was negated by the referee’s whistle, however, when Crouch hesitated coming out of the end zone.

Despite the lack of scoring, North Stafford’s swarming defense kept the Wolverines in control while Boyd and his bevy of gifted receivers got on track.

Led by linemen Trayvon Smith, Jamar Frazier, Julius Manning–Jackson and C.J. Van Buren, the Wolverines effectively shut down the Wildcats’ potent running game, which had been their calling card all year. At end of the first half, Mountain View had just 42 yards on the ground.

Season rushing leader Mark Shelton managed just 40 yards on nine carries and quarterback Edward Ware got only 41 on 14 attempts. Freshman Ike Daniels scored the Wildcats’ only touchdown late in the fourth quarter when he corralled an 8-yard pass from Ware.

“Our kids played hard, but we struggled to find something that would work against them,” said Mountain View coach Lou Sorrentino. “They play tough man, and they’re tough to run on and tough to throw on.”

After experiencing futility in the first half, North Stafford’s offense found its rhythm in the third quarter and seized control of the game with touchdowns on its first two possessions.

First, Swinton grabbed a pass from Boyd and scored on a nice cutback across the middle of the field to give the Wolverines a 14–3 lead. Four minutes later, Boyd connected with Tevin White from 10 yards out to put them in front by 18 points.

Boyd spread the wealth around among his receivers. Swinton, Holt Egan, Elisha Brown and Shawn Asbury all had five catches in the game.

“We came out with a good game plan. Mountain View is really strong,” said Asbury, who was also a standout on defense for the Wolverines the entire game. “Now, we’ve got to be ready to match Stone Bridge’s intensity.”

Mountain View’s loss ended another successful season for Sorrentino, whose Wildcats were playing in their third regional championship game and posted the most wins in school history.

“Give North Stafford credit,” said Sorrentino. “They beat us up front and on the perimeter. But I’m proud of my guys, especially these seniors. We lost some really good skill players to injuries this year, but we didn’t mail it in. We kept battling.”

The Wolverines of North Stafford win the Region 5D title with a 21-10 victory over Mountain View at Mountain View on Saturday, Nov. 30, 2019.