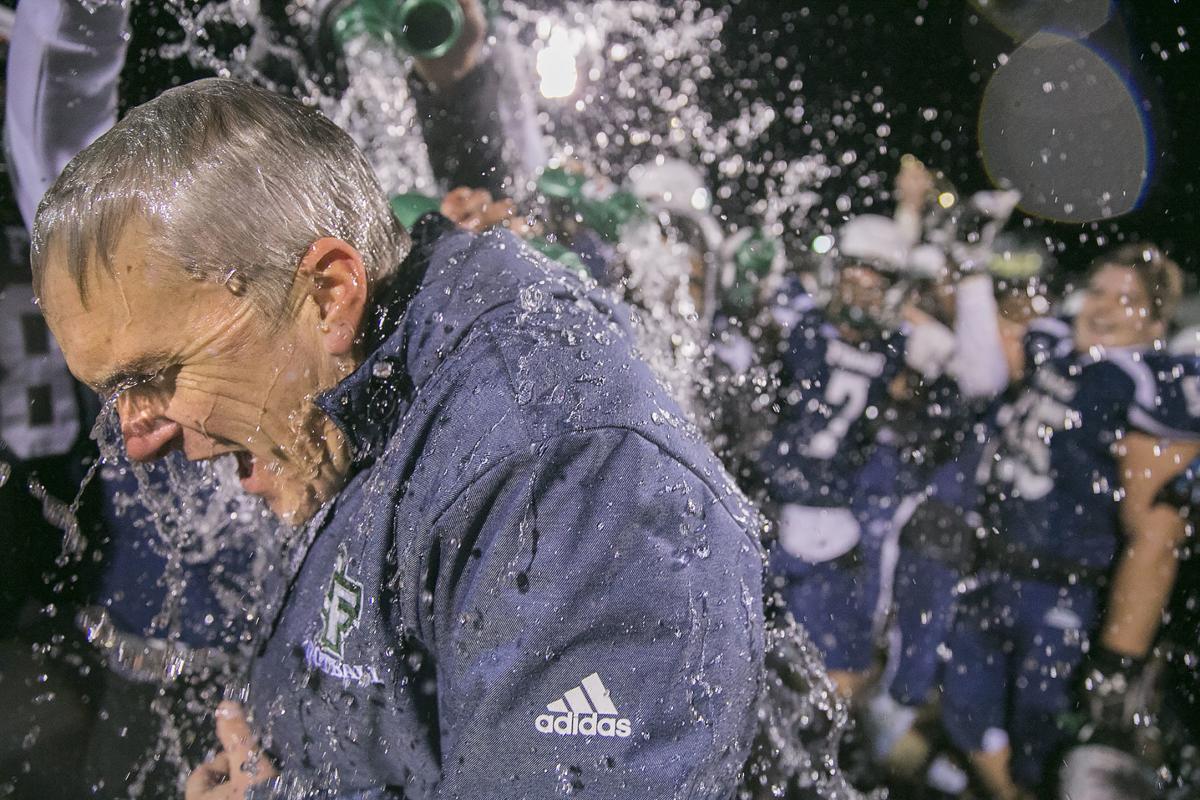 Colonial Forge coach John Brown gets doused by his Eagles after they defeated Massaponax 42–21 in Region 6B final. 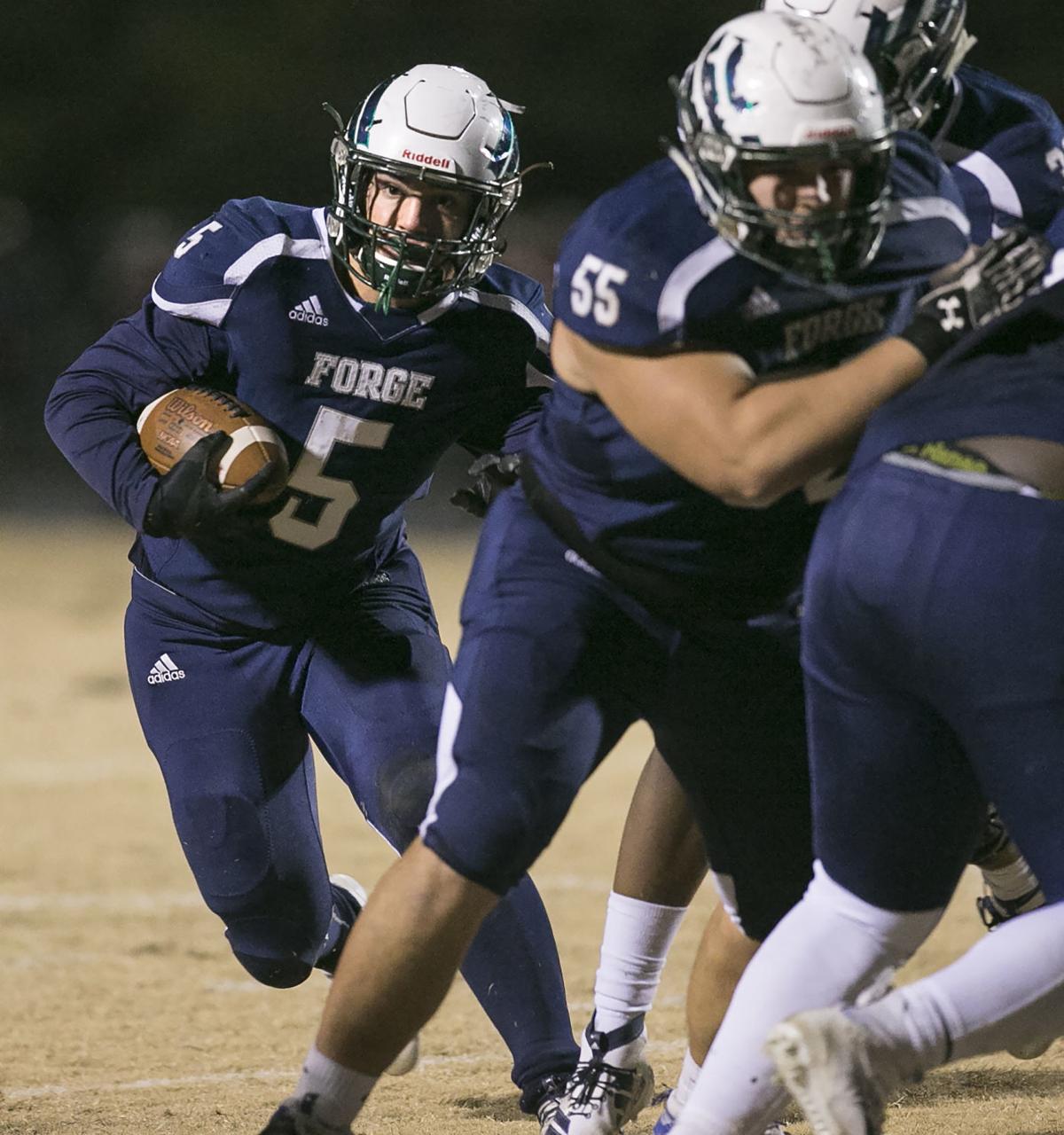 The Eagles’ Max Kauthen looks for a running lane Friday. He scored twice on the night. 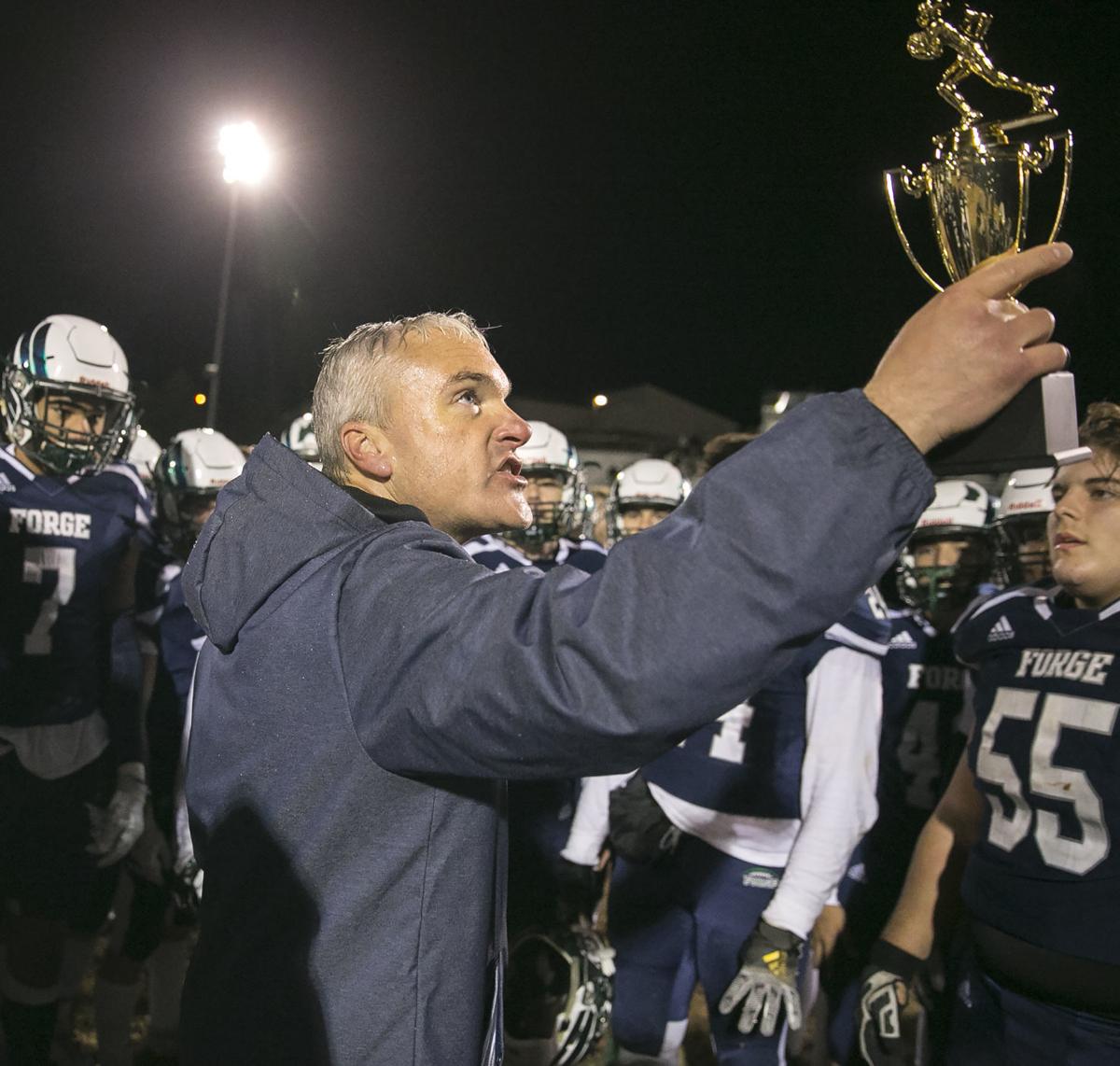 Colonial Forge’s John Brown hoists the Region 6B trophy for all the Eagles to see after the team beat Massaponax 42–21 on Nov. 29. Brown is The Free Lance–Star’s football coach of the year. 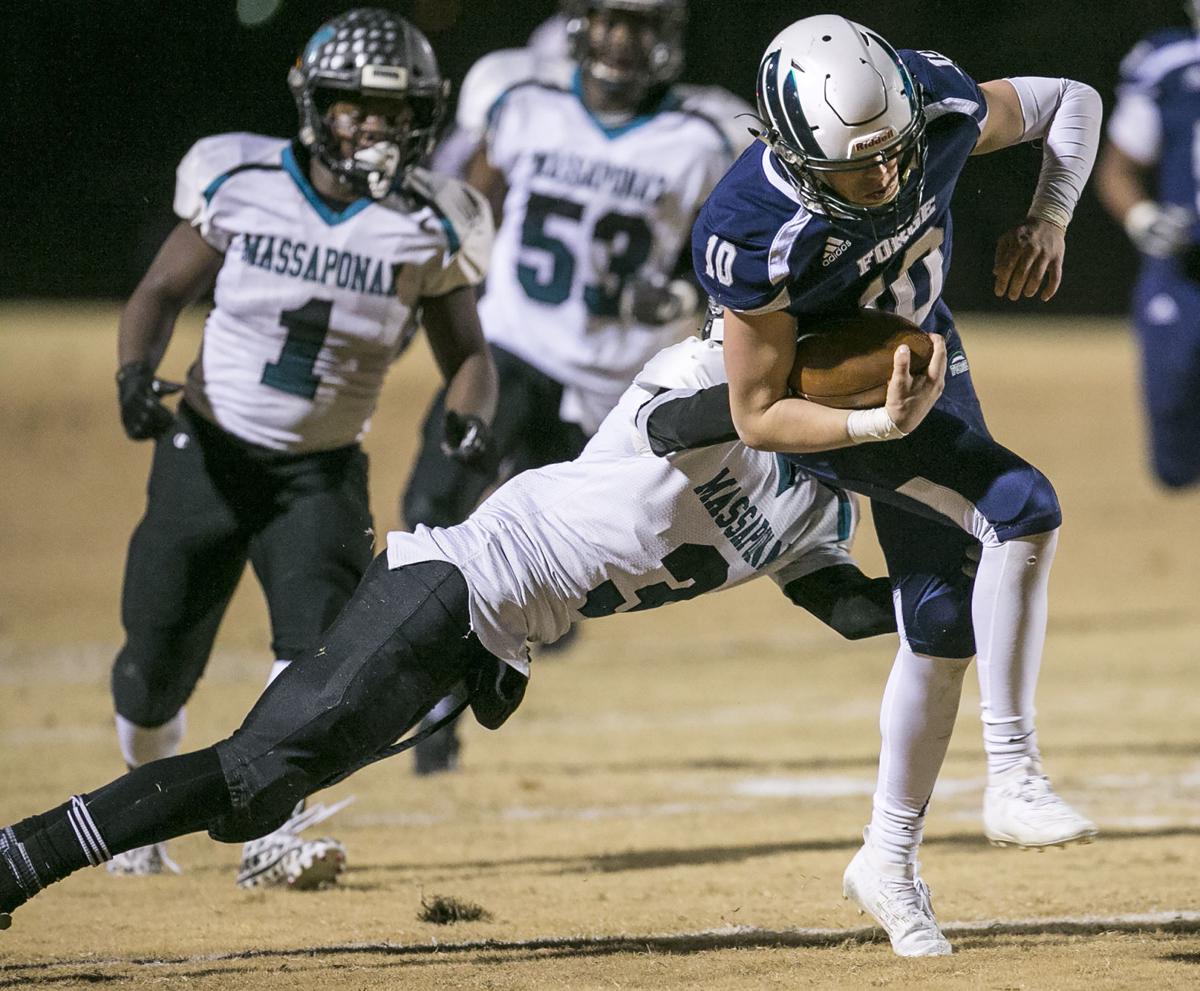 Eagles QB Madden Lowe picks up yardage on a keeper before being caught by Massaponax’s Izaiah Dowell. 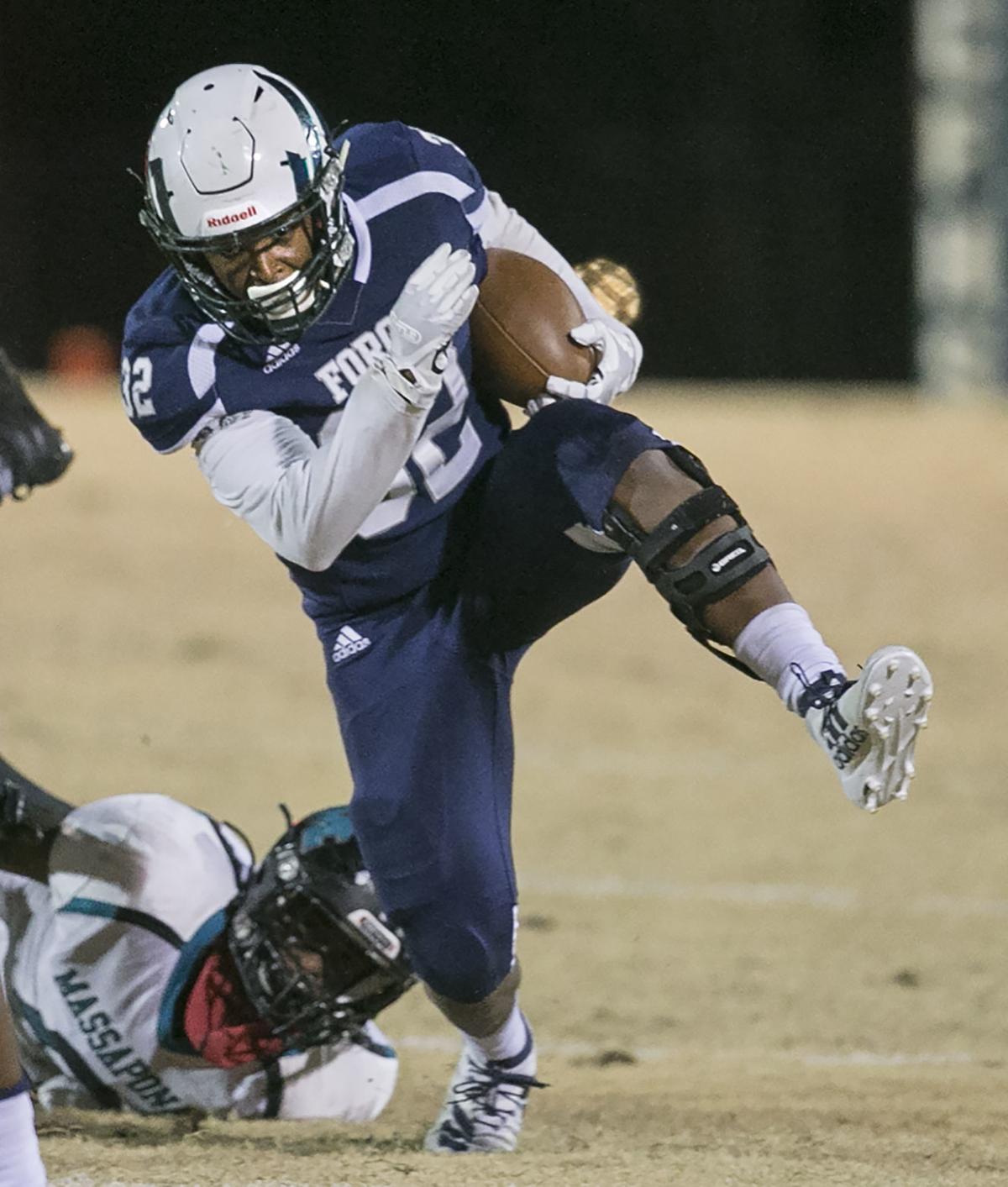 The Eagles’ Jordan Barnett keeps his balance on a 45-yard touchdown run during the fourth quarter.

Colonial Forge coach John Brown gets doused by his Eagles after they defeated Massaponax 42–21 in Region 6B final.

The Eagles’ Max Kauthen looks for a running lane Friday. He scored twice on the night.

Colonial Forge’s John Brown hoists the Region 6B trophy for all the Eagles to see after the team beat Massaponax 42–21 on Nov. 29. Brown is The Free Lance–Star’s football coach of the year.

Eagles QB Madden Lowe picks up yardage on a keeper before being caught by Massaponax’s Izaiah Dowell.

The Eagles’ Jordan Barnett keeps his balance on a 45-yard touchdown run during the fourth quarter.

Official numbers are unknown, but rumors have it that the football team at Colonial Forge High School—enrollment approximately 2,100—has at least twice that many capable running backs stashed on its roster.

“We can’t tell you,” Eagles coach John Brown replied coyly, when asked just how deep his depth chart extends at the position.

After starter Jamal Thomas went down with an undisclosed injury earlier this month, Colonial Forge has turned to a seemingly endless stable of backs, each with a distinct skill set on the ground.

On Friday, the Eagles rode a trio of ballcarriers en route to a 42–21 victory over Massaponax in the Region 6B championship game. The win sets up a state semifinal date with perennial powerhouse Oscar Smith next Saturday at 2 p.m. in Chesapeake.

Out of the gate, the Eagles handed their offensive reins to junior Jaelan Black, who responded by galloping for a 58-yard touchdown on the second play from scrimmage. Black’s second score, a 24-yard scamper, put the Eagles ahead 14–0 with 6:52 to play in the first quarter.

“He saw his holes well,” Harley said of Black. “They were small holes, he slipped through them and then that breakaway speed just left them all behind.”

Max Kauthen’s running style is decidedly less subtle. After rushing for 178 yards and two touchdowns in a win over Patriot last week, the bruising senior was used more sparingly Friday. But he didn’t need volume to be efficient, finding the end zone twice on 11 carries.

A Jacob Romero 1-yard touchdown run pulled the Panthers within six, 27–21, with 8:17 to play. But, in reality, Massaponax’s season ended on the first play of the fourth quarter.

Panthers quarterback Luke Morley, the Commonwealth District offensive player of the year, remained on the turf following a 14-yard carry, clutching at his left ankle in agony. After testing the limb to no avail on the sidelines, Morley watched the game’s final sequence on crutches.

Prior to his injury, Morley had proven Massaponax’s only viable option running the ball. He finished with 142 yards, including a 61-yard sprint on fourth down that primed the Panthers’ first touchdown, a 1-yard sneak.

With Morley sidelined, the Eagles could sense a knockout opportunity. Kauthen delivered it with his second touchdown run, a 34-yard jaunt off tackle on fourth and 1 with 5:43 left.

Finally, there’s Jordan Barnett. Barnett, a junior transfer who'd do well to visit a chiropractor over the weekend, punctuated Colonial Forge’s victory with a 45-yard touchdown run—drawing so many compounding facemask penalties in the process that Madden Lowe was able to drill the ensuing kickoff clean through the goalposts.

As Brown hoisted the championship trophy in the postgame huddle, he referred to Friday’s win as "a gate" his team needed to clear before realizing its biggest goal.

On the other side of that gate stands an Oscar Smith program that’s functioned more like a roadblock where the Eagles are concerned. The Tigers ended deep Colonial Forge postseason runs in 2016 and 2017.

Junior Elijah Sarratt, who hauled in a 10-yard touchdown reception on Friday, was in the stands for both of those contests supporting his older brother Josh.

“It was stinging for me and I wasn’t even playing,” Sarratt said. “The emotions after the loss, it makes you want to fight that much harder to win for them, for the people that graduated.”

"[Jaelan Black] saw his holes well...then that breakaway speed just left them all behind."