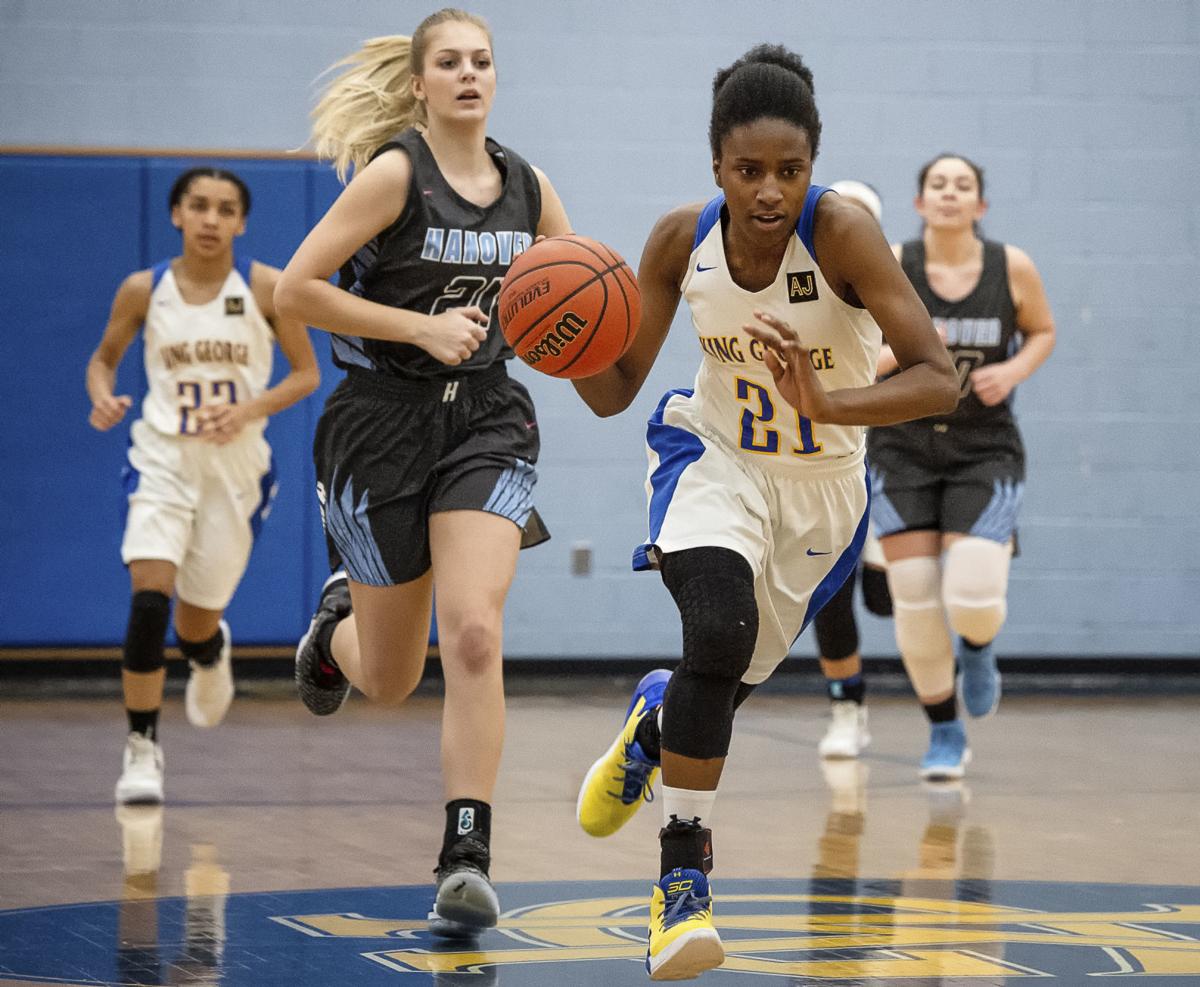 King George's Oma Aguolu (21) bring the ball down on a fast break during the Region 4B quarterfinals between Hanover and King George on Feb. 21, 2019. King George defeated Hanover 62-37.(Tom Rothenberg for The Free Lance-Star) 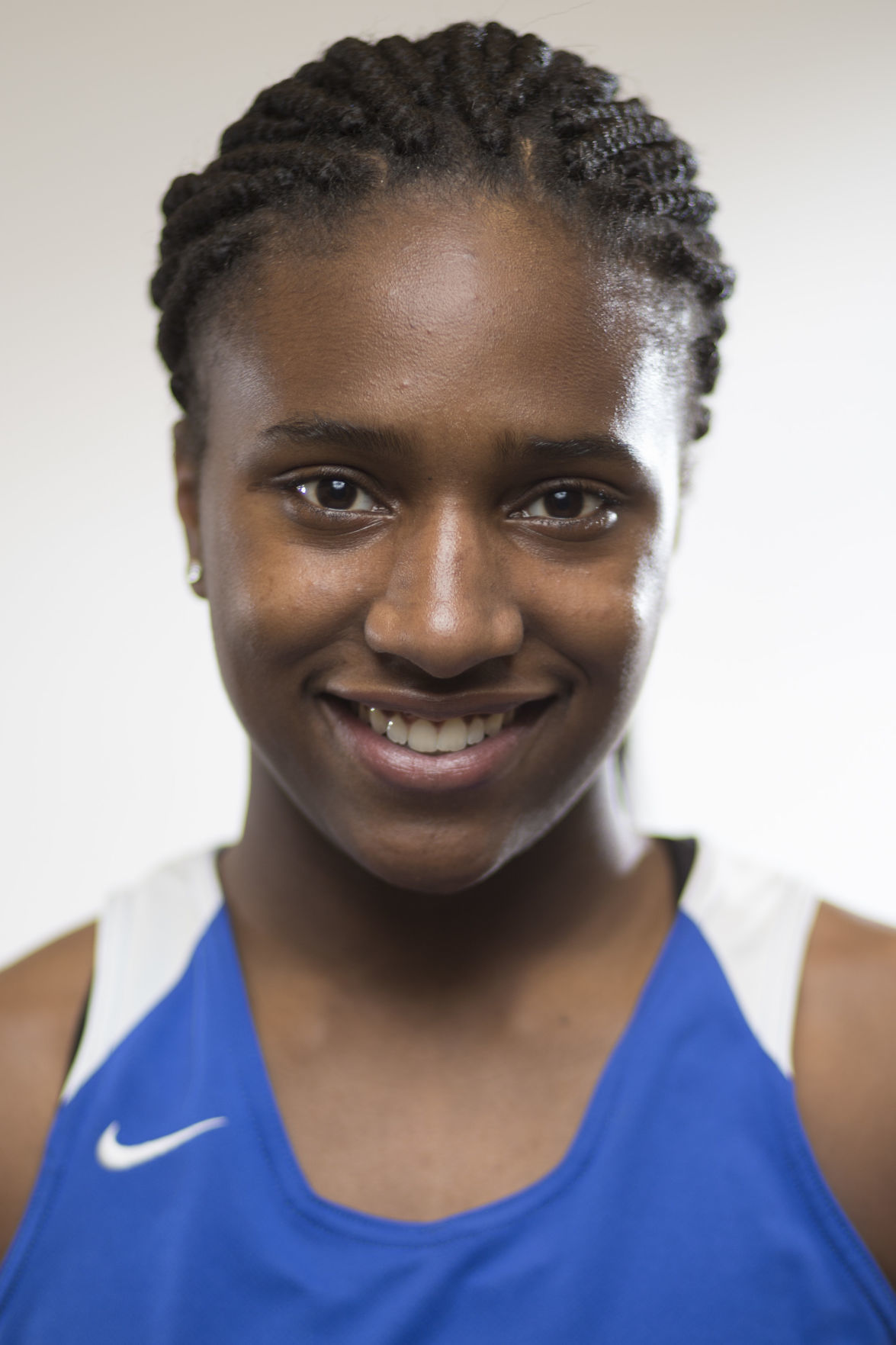 King George's Oma Aguolu (21) bring the ball down on a fast break during the Region 4B quarterfinals between Hanover and King George on Feb. 21, 2019. King George defeated Hanover 62-37.(Tom Rothenberg for The Free Lance-Star)

The King George girls basketball team led Monacan by nine points at halftime of the Region 4B semifinals last season and was 16 minutes away from a trip to the Class 4 state tournament.

But the Chiefs were battled-tested. They rallied and won the game 55–47 to end the Foxes’ 24-game winning streak.

King George finished the season 24–1 and it’s the number on the right side that has head coach Neil Lyburn’s team motivated for the new season.

The Foxes won 18 games last season by at least 20 points and were rarely tested before they ran into the Chiefs to end their season.

That’s prompted King George to examine the schedule with hopes that even if it drops a few regular-season games, it’ll be better prepared for a deep postseason run.

“It’ll put some pressure on us,” Lyburn said of the schedule this season. “Sometimes it’s not about winning the game then but figuring out how to win the games later on. Last year we never got challenged so when it came down to being challenged, it felt a little bit different.”

King George (1–0) defeated Mountain View 40–21 in the season-opener on Tuesday. The Foxes will travel to Monacan on Saturday to face Mills Godwin, which finished 24–3 in 2018–19.

They also have a Christmas tournament at Great Mills High in Maryland Dec. 27–28 and a nondistrict game scheduled with Class 5 Patrick Henry–Roanoke on Jan. 25 at Highland Springs.

“We’ll be able to play against teams we’re not really comfortable with and learn to execute better and more efficiently in tight moments,” King George senior forward Oma Aguolu said. “It’ll help us in the long run.”

The Foxes captured the Battlefield District regular-season and tournament titles last season. They graduated starting point guard Halia Ellis, who is now a freshman at the University of District of Columbia.

Junior Lauren McCall will shift over from shooting guard to take over Ellis’ point guard duties, and is capable of running the offense.

Lyburn expects the Foxes to use the 5-foot-10 forward’s length to wreak havoc defensively.

McCall averaged 8.3 points per game last season, but will have to become more of a play-maker this season.

“I haven’t run the point since middle school,” McCall said. “Switching back to point guard is a little nerve-wracking but I’ve done it before, so I can do it again … I have to make sure everybody is in the correct place on the court. So it’s a lot more on your plate.”

The Foxes also return Gabby Mack, who will enter the starting five after a role off the bench last season. Junior Aiyana Ellis’ activity on defense helps the Foxes get into transition. The 6-foot-1 center is the younger sister of Halia Ellis. She averaged 7.6 points and 7.0 rebounds per game as a sophomore.

This season, her younger sister, Briana Ellis, will be a freshman. Briana stands 6-foot-2 and is expected to be a rebounding force. Freshman Halie Callahan and Stafford transfer Amber McComber will be role players.

King George should be challenged in the Battlefield by Eastern View, which returns all-state junior guard Terese Greene. Chancellor, with all-district guard Jasmine Talley and a talented supporting cast, is expected to pose a test, as well.

The Foxes won’t mind a couple of defeats if they become hardened to make a statement later in the winter.

“Losses may happen but we just have to work hard throughout the season and not let that get in our heads,” Aguolu said. “We have a long year in front of us.”

This week, The Free Lance-Star is previewing the winter high school sports season. Here is the schedule:

Losses may happen but we have to work hard ... and not let that get in our heads.