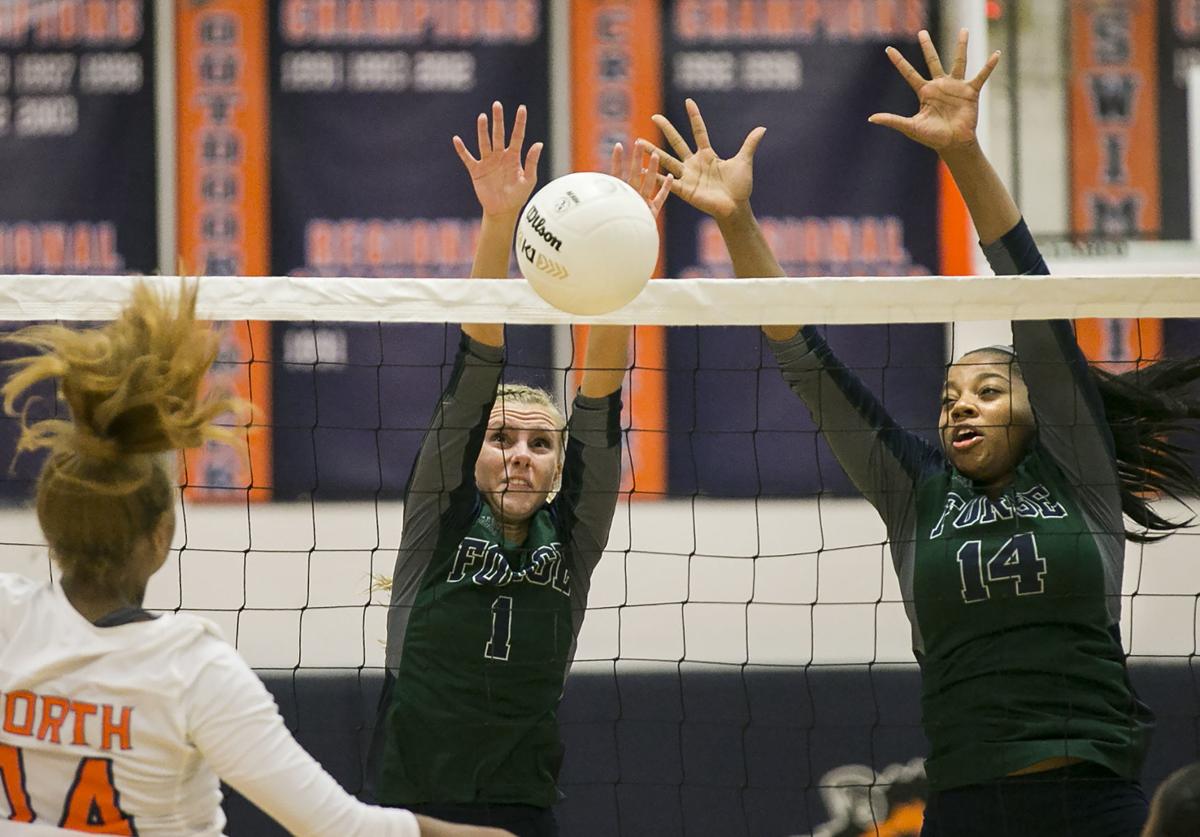 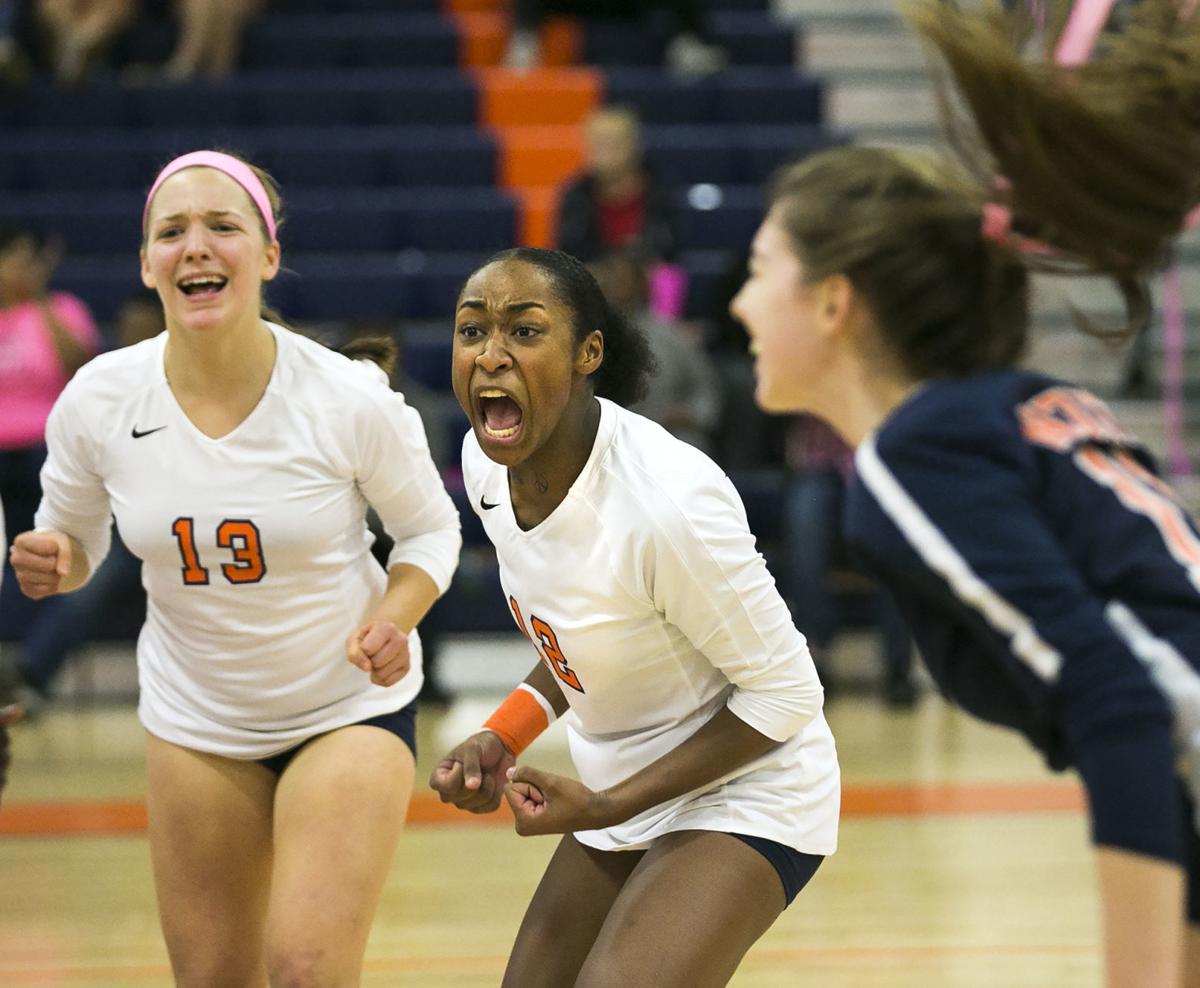 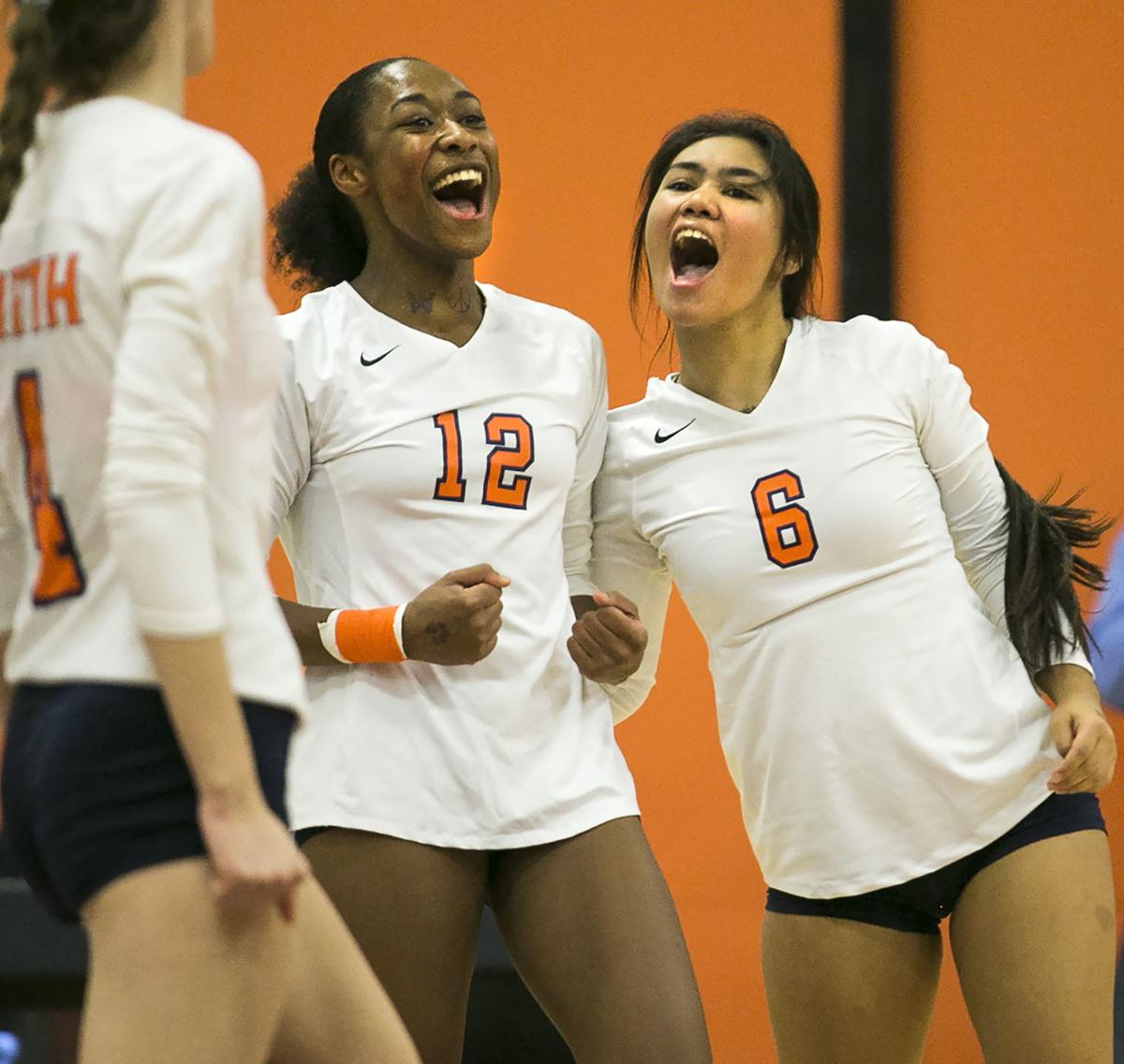 North Stafford’s Victoria Barrett (center) and Izabelle Allen celebrate after after pulling ahead of Colonial Forge 2-1 at North Stafford on Tuesday, Oct. 8, 2019. 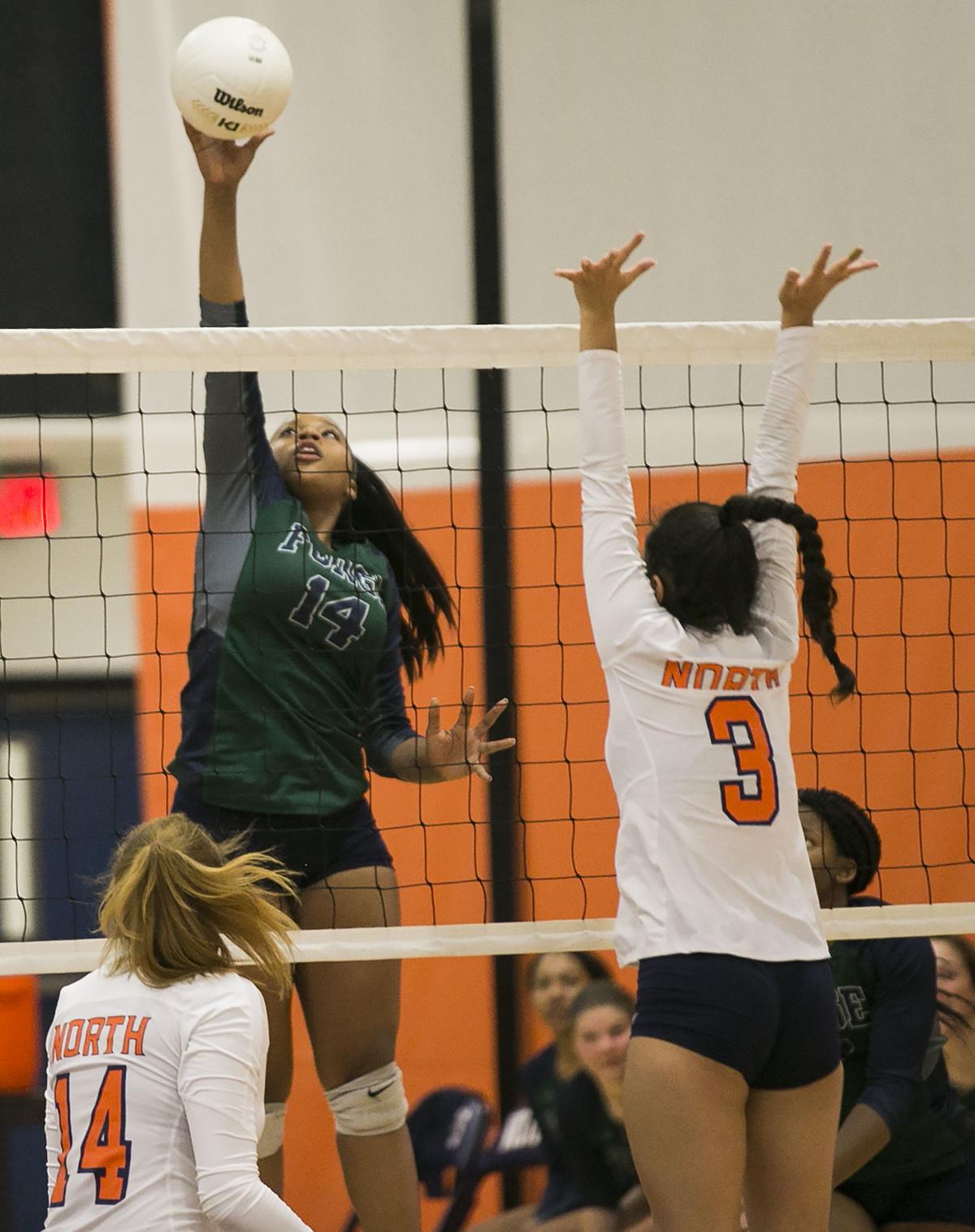 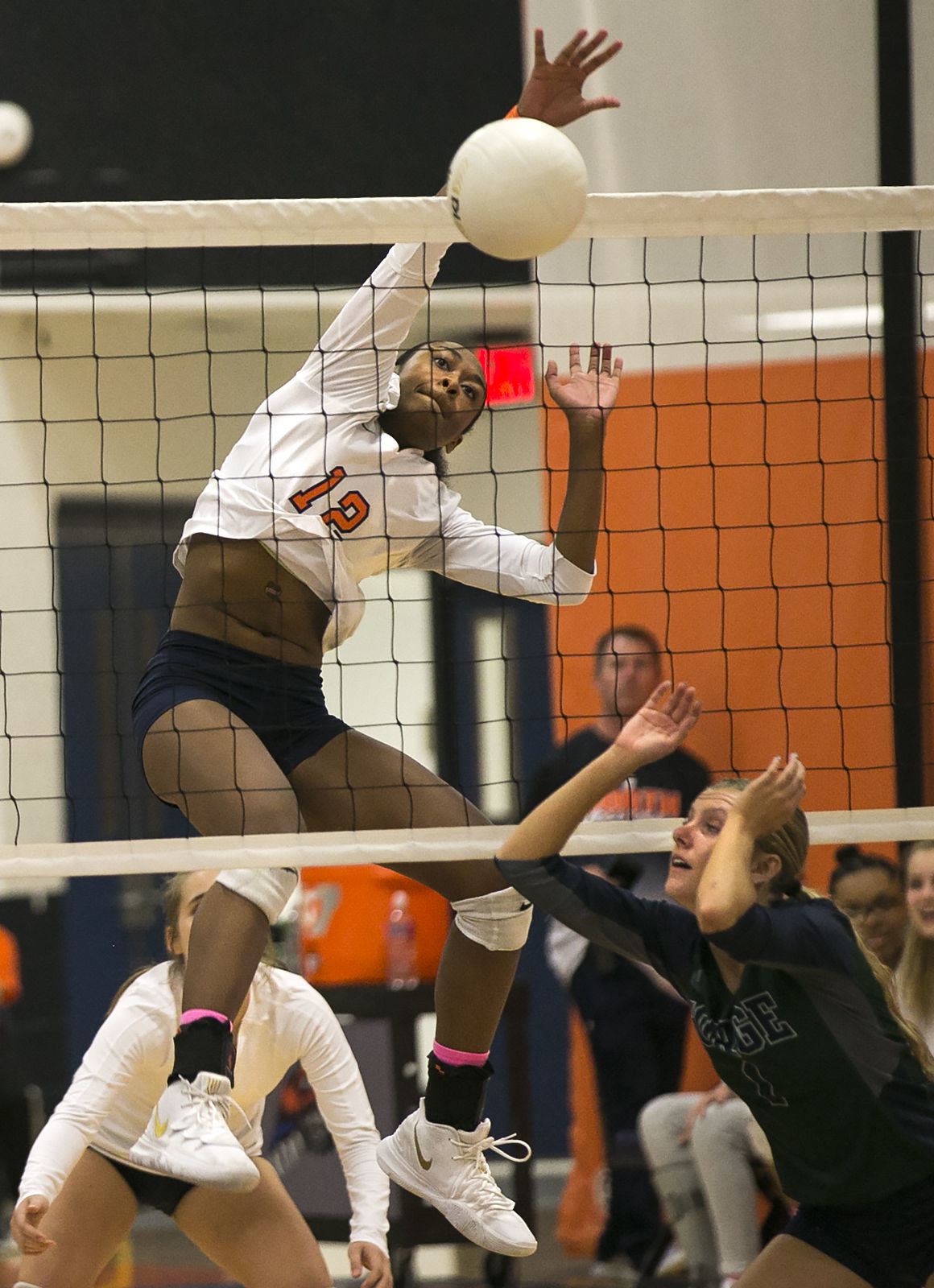 North Stafford’s Victoria Barrett (center) and Izabelle Allen celebrate after after pulling ahead of Colonial Forge 2-1 at North Stafford on Tuesday, Oct. 8, 2019.

“It definitely was better than the first time,” said North Stafford senior Victoria Barrett, who finished with 33 kills, eight digs and two blocks. “We all came together. We wanted to beat Forge so bad.”

“We haven’t played like that in quite a while,” added teammate Aubrey Lynch, who had 25 assists and eight digs.

Teammate Isabelle Allen also propelled the offense with 14 assists and four of the team’s eight aces. “Once we learned how to jell, we play so well and we had more mental focus,” Lynch said.

The outcome left North Stafford, Colonial Forge and Massaponax all with two district losses heading into the final stage of the regular season. While the Wolverines (8–5, 7–2) have a clear path to the Class 5 regional playoffs, both the Eagles (19–5, 8–2) and Massaponax are in a tight battle for possibly one (or a maximum of two) berths in their Regional 6B competition.

“Night and day,” Candelora said of the difference in her team in its rematch against the Eagles. “We had an immense amount of errors in the first game. This match was at least half. In a couple of games, we missed a lot of serves, but we stuck together after that, kept telling [the players] to play our game, not get into their style of play.”

Joseph finished with seven kills and teammate Gabby Figueroa chipped in with five kills and two aces. Ashley Blackwell had a team-high five blocks, while Alayana Woodall had six digs as the Wolverines totaled 40 digs in total.

Following a 17-kill effort against Mountain View, Kayla Wallace had another strong outing for the Eagles with 10 kills and eight blocks. Junior setter Paityn Walker had a solid all-around game with 32 assists, 11 digs, four kills and two aces. And Loren Bell had five kills.

“We serve aggressively and normally into the court. Going into the fourth set, only two girls got points off their serves,” she said.

On the challenge of taking on Barrett and company on the road, Hempe commented: “We saw her ‘A’ game, which we were expecting. It’s tough to slow her down and their crowd keep them very tight even when they are down.”

Looking at the schedule ahead, Lynch said: “I think it will be difficult and we can’t take anything for granted. We have to keep our energy up and work hard every single game.”