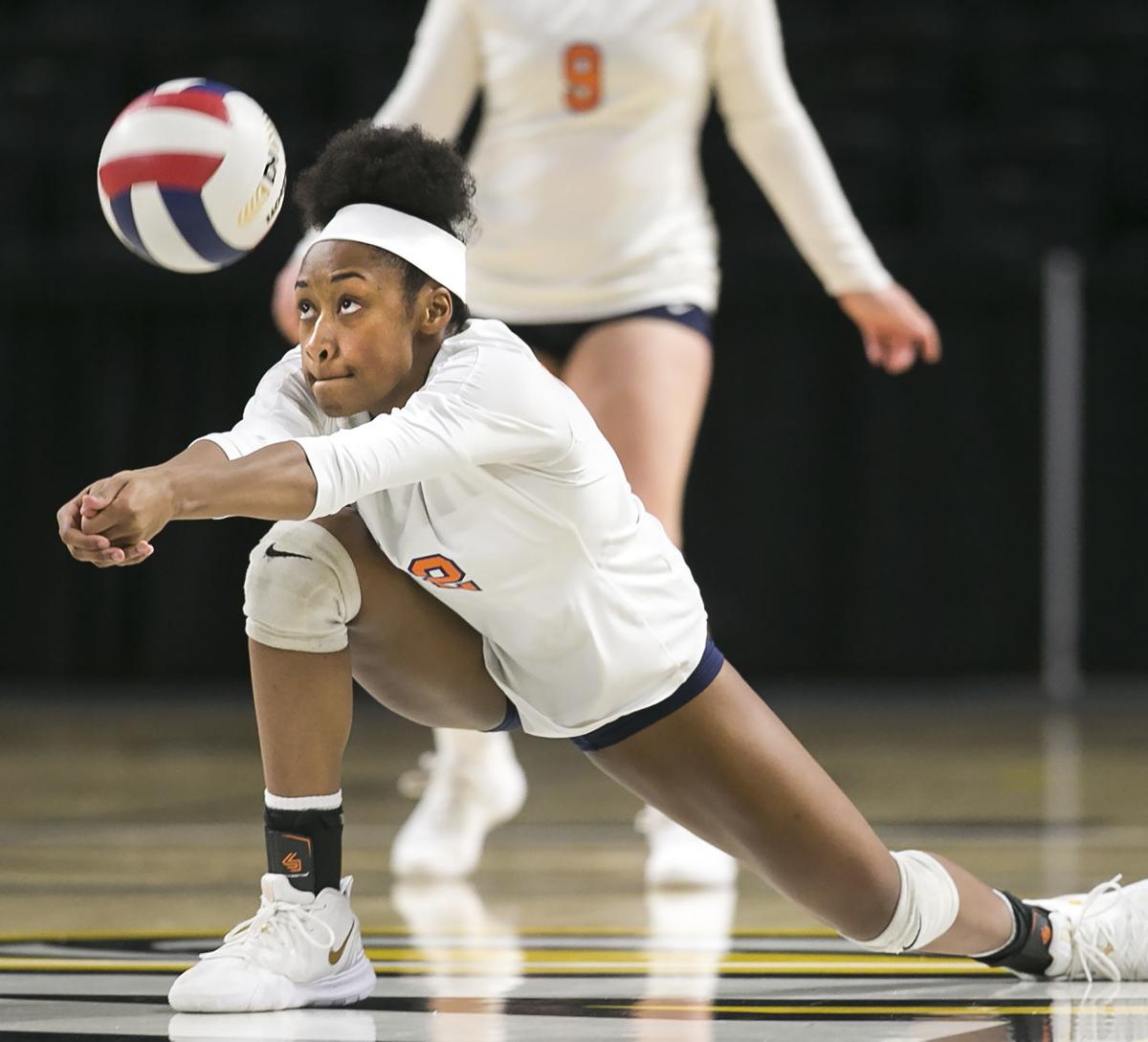 Victoria Barrett of North Stafford gets under a Cox shot in the Class 5 state volleyball championship at the Siegel Center in Richmond on Friday, Nov. 22, 2019. 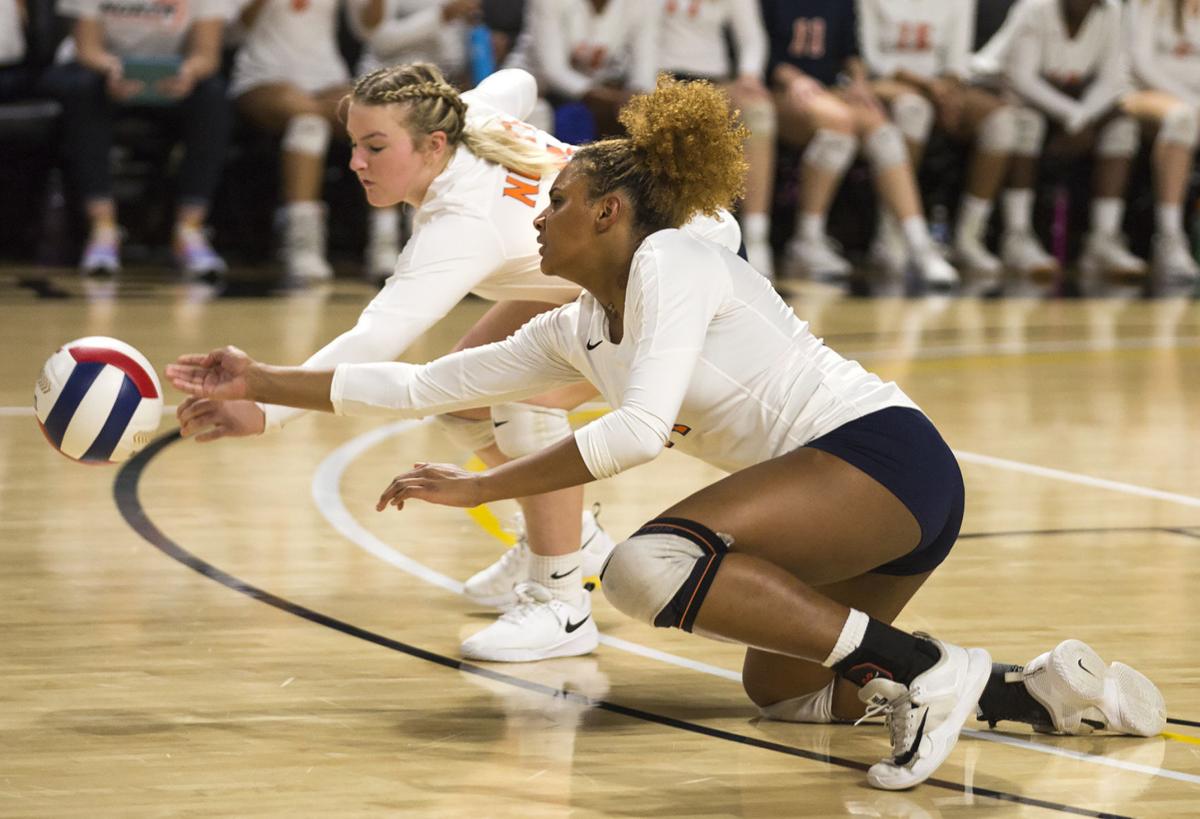 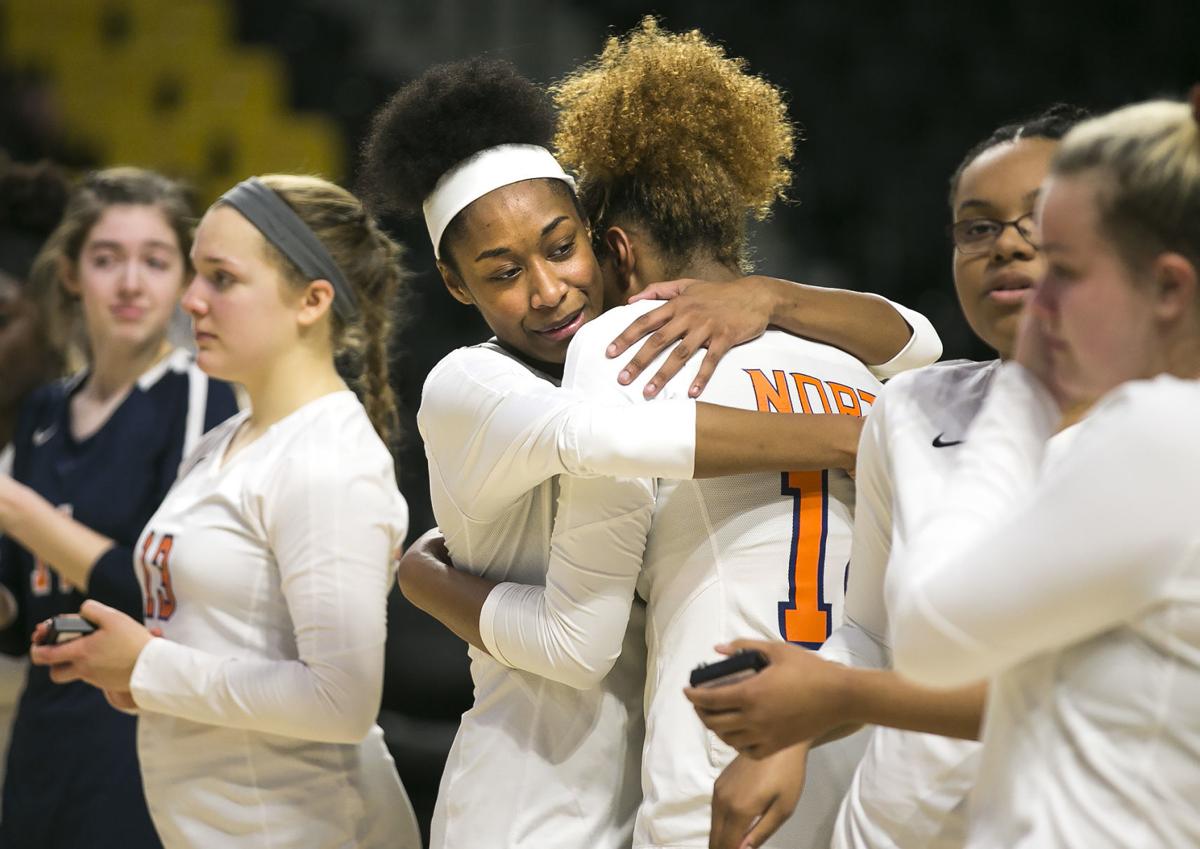 Victoria Barrett (third from left) hugs teammate Gabrielle Figueroa after North Stafford’s 3–2 loss to Frank Cox in Friday’s Class 5 state championship at the Siegel Center in Richmond. Barrett, a senior, had 34 kills and 30 digs in her final game. 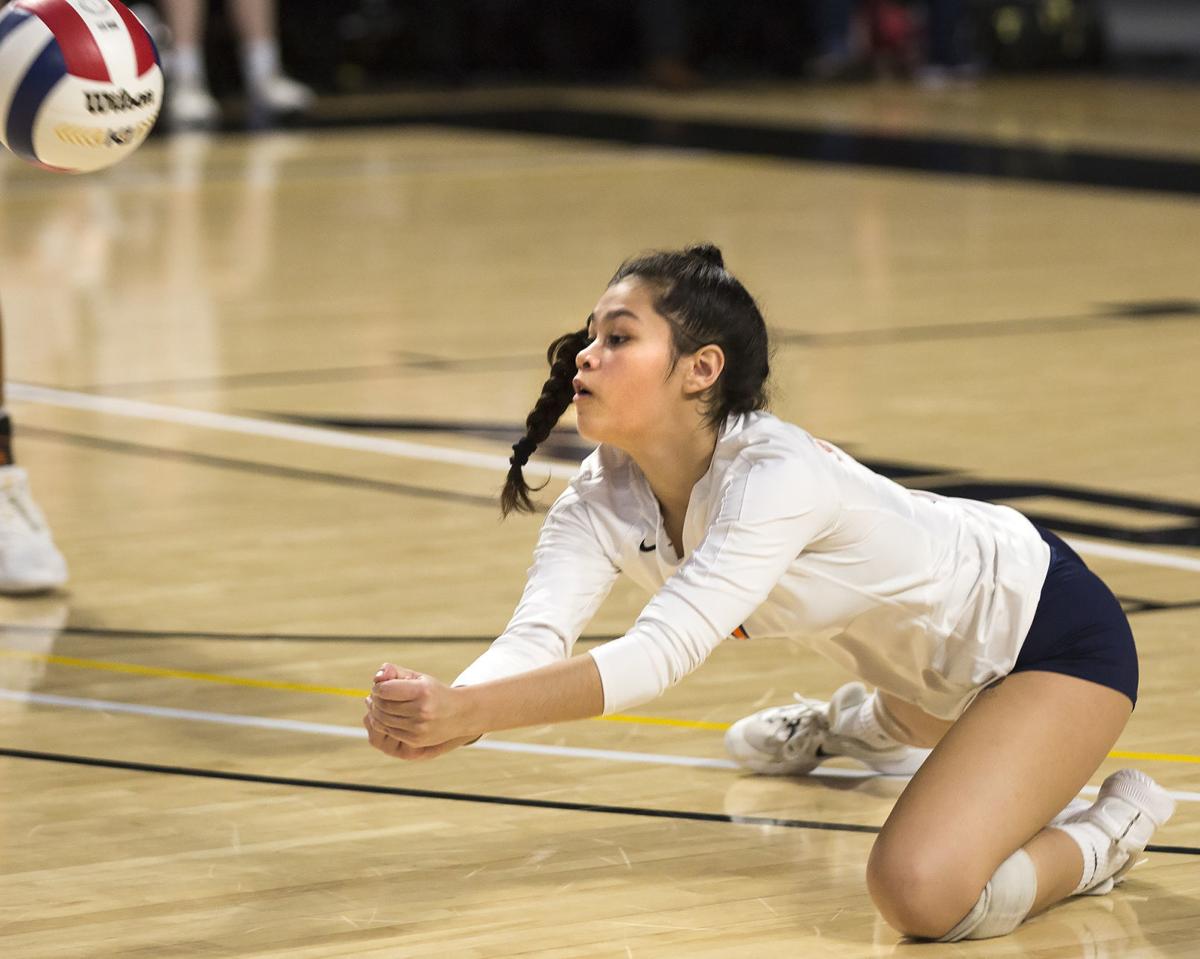 North Stafford’s Alexis Allen makes a diving dig against Frank Cox in the Class 5 championship Friday night. The Wolverines fell to the Falcons in five sets.

Victoria Barrett of North Stafford gets under a Cox shot in the Class 5 state volleyball championship at the Siegel Center in Richmond on Friday, Nov. 22, 2019.

Victoria Barrett (third from left) hugs teammate Gabrielle Figueroa after North Stafford’s 3–2 loss to Frank Cox in Friday’s Class 5 state championship at the Siegel Center in Richmond. Barrett, a senior, had 34 kills and 30 digs in her final game.

North Stafford’s Alexis Allen makes a diving dig against Frank Cox in the Class 5 championship Friday night. The Wolverines fell to the Falcons in five sets.

Barrett wowed the crowd with 34 kills, 30 digs, five aces and four blocks, but it wasn’t enough as the Wolverines grew weary in the final two games and were unable to secure the first-ever volleyball state championship for a Fredericksburg-area school.

“She’s not only a great athlete, she’s a good teammate and I don’t know if you can replace that,” North Stafford head coach Nicole Candelora said. “She will definitely be missed. She is a very key part of why North Stafford has been as successful as it has these last four years.”

That run includes a trip to the 2017 state semifinals and back-to-back treks to the state title match.

The Wolverines were overwhelmed in a 3–0 loss to Princess Anne in 2018 at the College of William & Mary.

They were much more prepared for the big stage on Friday.

“Some of us were on the team last year, so we came in and told the new people, ‘It’s OK. You can relax in this atmosphere. It’s really exciting,’” Barrett said.

The words of advice seemed to pay off early as the Wolverines came out loose. They were energetic as they rolled to a 10-point win in the opening game. It appeared they were headed toward a 2–0 advantage when they ran into trouble in Game 2.

The Wolverines pulled out a thrilling 27–25 win in Game 3 and seemingly had momentum.

But that idea was quickly put to rest in the fourth game as the Falcons opened on a 9–3 run and never looked back. The Wolverines got no closer than five points in that game.

“I think us actually being here kind of got to us and we were just kind of overthinking every little mistake and how it can affect our game,” Wolverines’ junior Gabrielle Figueroa said. “We just kind of got under the pressure.”

Barrett said a combination of weariness and panic set in during the fourth game. She and Figueroa said they got over that in Game 5, but service errors did them in. The Wolverines fell behind 3–0 before rallying to tie the decisive game 4–4 and 7–7.

But Cox closed strong to take the state championship back to Virginia Beach.

Thompson said she was proud of the way her team handled Barrett’s barrage.

After the match, Candelora reflected on her team’s accomplishments. She said the Wolverines didn’t expect to get back to the title match after graduating four starters, including current Penn State freshman Sydney Ferguson.

But the Wolverines showed uncommon grit throughout the season, especially in a 3–2 win over Briar Woods in the state semifinals. Figueroa played through an injured ankle that continued to swell on Friday as the Wolverines won the final game 21–19.

“I’m still stuck on Tuesday,” Candelora said. “In 24 years I don’t think I’ve ever had a team come back with that much fight because in that match we got obliterated the first two games. … I told them coming here, ‘We know we can fight. We can know we can battle. It doesn’t matter what the score is. … In that fifth set [Friday], a couple of plays here or there and it could’ve gone either way.”