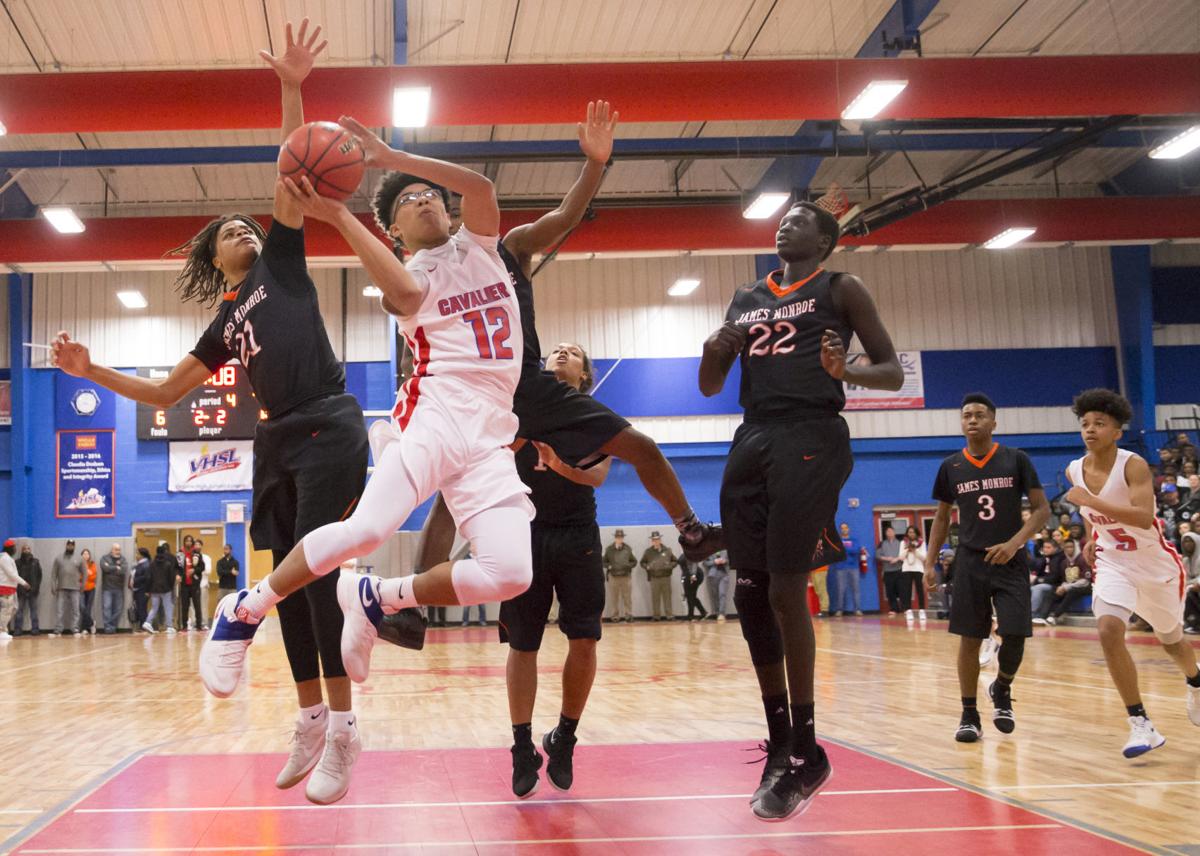 Caroline’s Xavier Campbell pushes through the James Monroe defense on a drive in the lane. 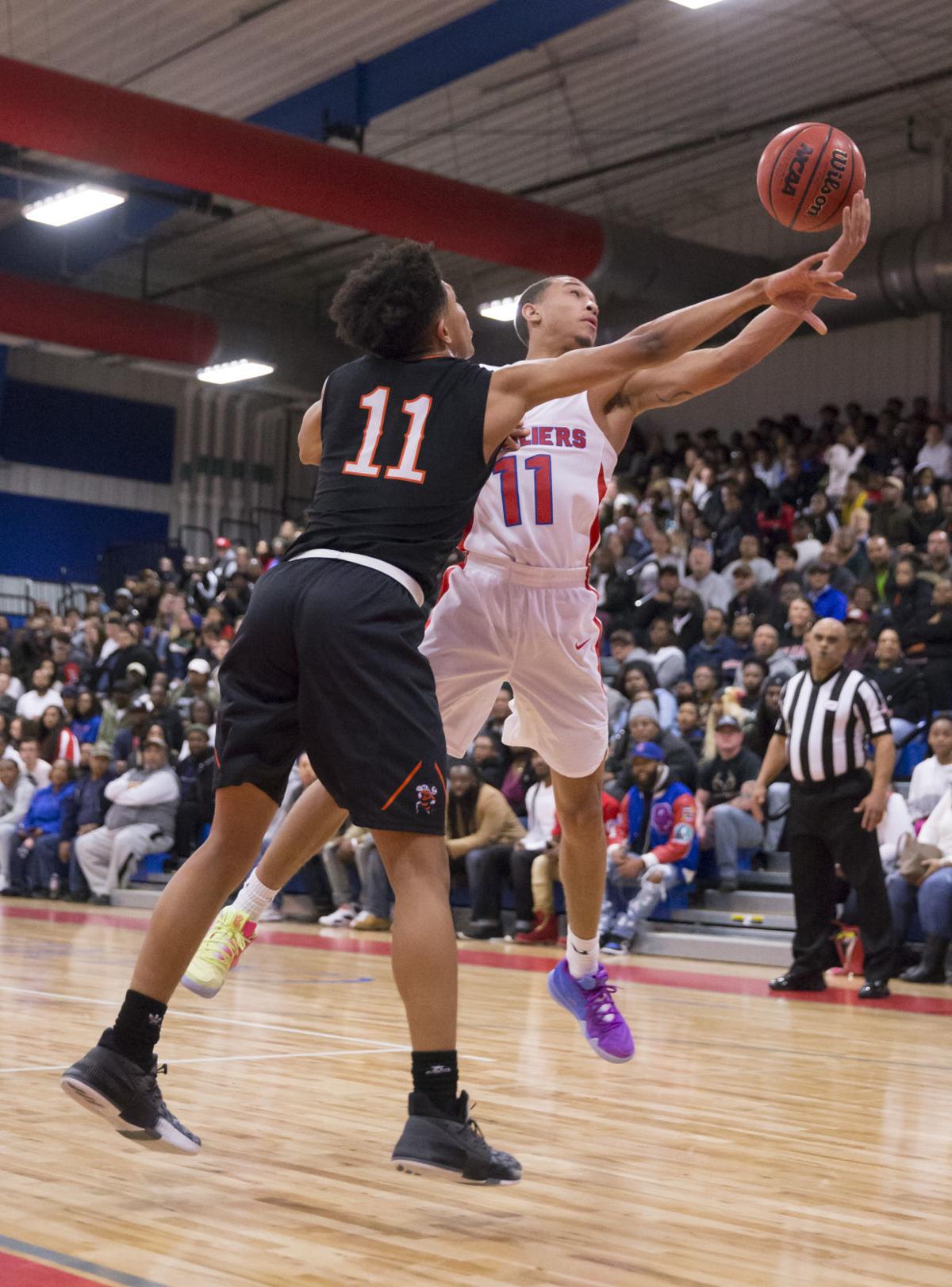 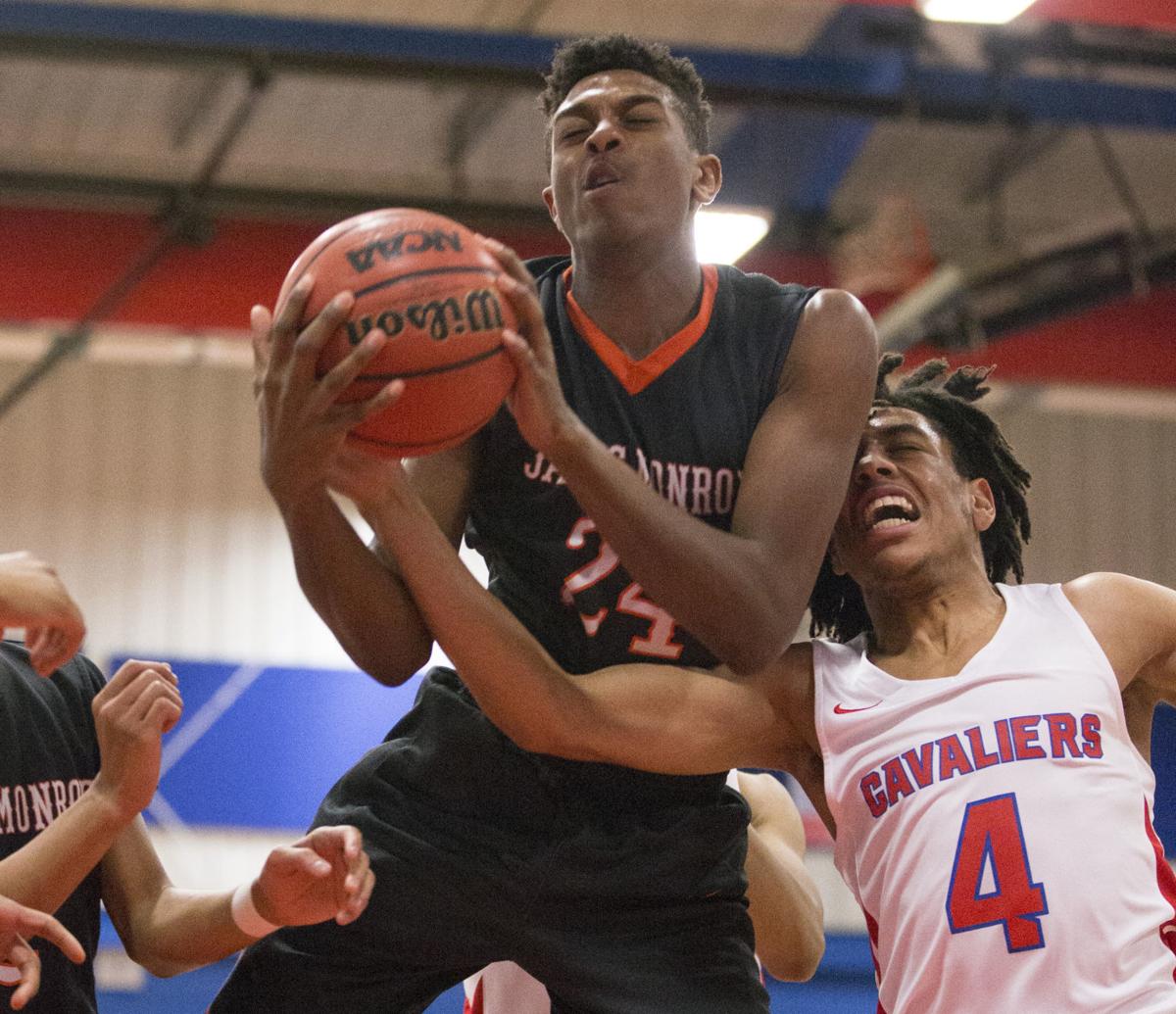 James Monroe’s Justin Logan gets to the ball ahead of Caroline’s David Ware during Friday’s game at Caroline High School in Milford, Va. on Feb. 9, 2018. Caroline won 82-57. 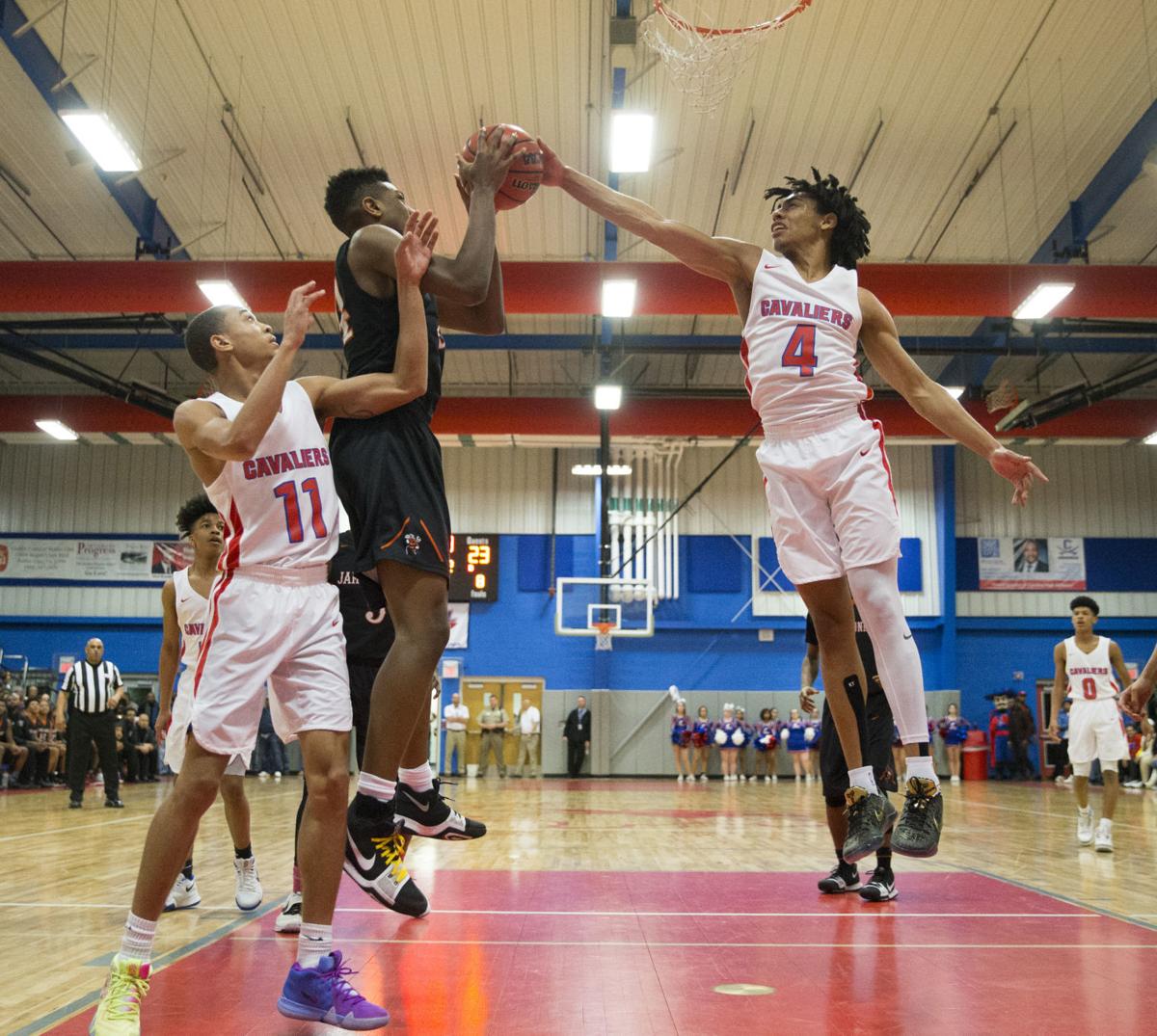 The Cavaliers’ David Ware (4) blocks a shot by the Yellow Jackets’ Justin Logan during Friday night’s game at Caroline High School. Ware scored 21 points in leading Caroline to an 82–57 win. 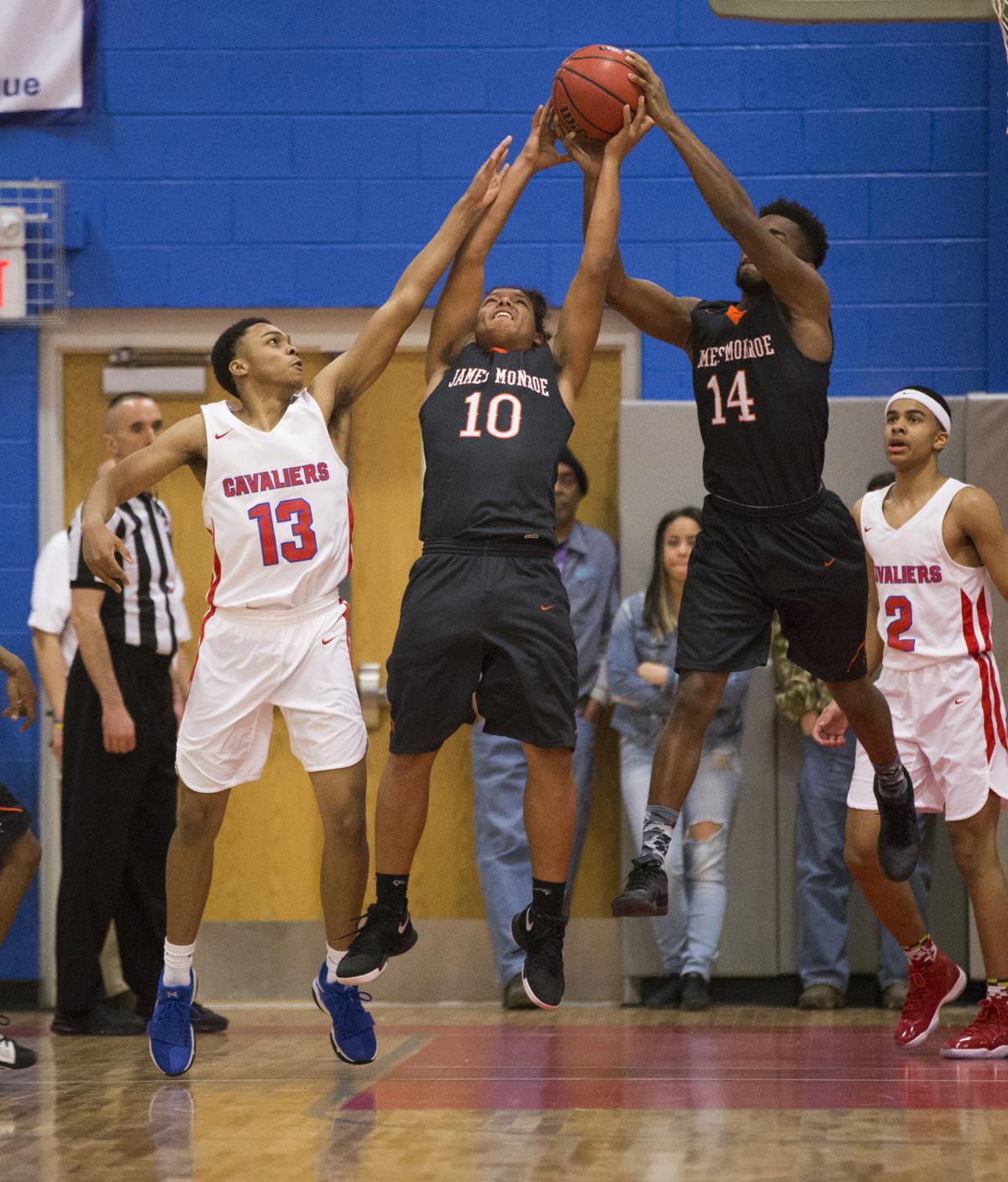 Despite Jabrel Stevens’ (13) effort, the Yellow Jackets’ Josh Coleman (10) and Chris Reaves–Williams (14) have position to make a rebound Friday.

Caroline’s Xavier Campbell pushes through the James Monroe defense on a drive in the lane.

James Monroe’s Justin Logan gets to the ball ahead of Caroline’s David Ware during Friday’s game at Caroline High School in Milford, Va. on Feb. 9, 2018. Caroline won 82-57.

The Cavaliers’ David Ware (4) blocks a shot by the Yellow Jackets’ Justin Logan during Friday night’s game at Caroline High School. Ware scored 21 points in leading Caroline to an 82–57 win.

Despite Jabrel Stevens’ (13) effort, the Yellow Jackets’ Josh Coleman (10) and Chris Reaves–Williams (14) have position to make a rebound Friday.

The host Cavaliers made sure they didn’t disappoint their large following on senior night. Led by a balanced scoring attack that featured contributions by 10 players, Caroline built a 20-point lead at the half and then coasted to an 82–57 win over second-place James Monroe.

The one-sided victory nailed down the top seed for the Cavaliers (18–3, 10–2) in next week’s district tournament, which starts on Monday at Caroline. The Cavaliers will host No. 4 Courtland, while JM (16–6, 8–4) will meet Eastern View. The winners meet on Wednesday at the higher seeded school.

“We played well the whole game,” said Cavaliers coach Antoine Johnson. “Everybody that came in off the bench did well. We hit our shots and played defense. Hopefully, it will continue in the tournament.”

“Basketball had kind of died for a while,” said Ware, who set a school record with 51 points in a victory over King George last month. “Caroline is a basketball school, so it’s good to bring basketball back here.”

The Cavaliers have brought it back in a big way this season. Their up-tempo, pressing defense and fast-paced offense have created headaches for many teams this year, and Friday night James Monroe had trouble keeping up with them once they got into gear.

After building a seven-point led at the end of the first quarter, the Cavaliers exploded for 27 points in the second frame and pulled in front, 45–25, at the intermission.

Ware score 10 of his points in the first half, but a pair of back-to-back 3-pointers by Kaylen Taylor lit the spark that got Caroline really going. After JM had narrowed the lead to seven points, Taylor’s two buckets ignited an 18–8 run in the closing minutes and the Cavaliers never looked back.

Down by 20, JM opened the second half with a 6–2 spurt in the first two minutes, but Caroline had the answer and squelched the rally in a hurry. Ware scored on a hard drive and Coleman scored in the lane and the Cavaliers increased their margin to 31 points at the end of the third quarter (67–36).

“Coach told us not to let up on them after the half,” said Ware. “We know that JM is our rival and that they’re never going to quit.”

The Jackets were playing their first game in seven days, while it was the third game of the week for Caroline. JM coach Carlos Evans believed the long layoff may have had an effect on his team.

“This was our first game this week and I think we came out a little flat,” said Evans. “But [Caroline] made their open three’s and played a great game. It was a great opportunity for them and they took advantage of it. We need to try and move forward now and do well in the tournament.”

Caroline blistered the nets for nine 3-pointers and forced a number of JM turnovers with its pressing defense. The Cavaliers forced six turnovers in the first quarter and their defense was a major factor in keeping the lead.

“We came out with a lot of focus tonight,” said Coleman. “The crowd really got us into it. We need to keep doing that next week.”

“The key for us now is to practice hard and go 100 miles an hour until the final buzzer goes off,” added Ware. “We need to be ready.”