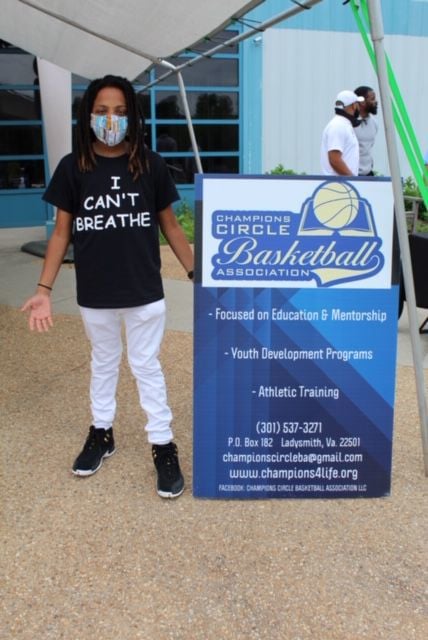 Kadin Pittman sports an ‘I Can’t Breathe’ T-shirt before Monday’s ‘Champions Stand for Justice’ forum on race relations in Caroline. 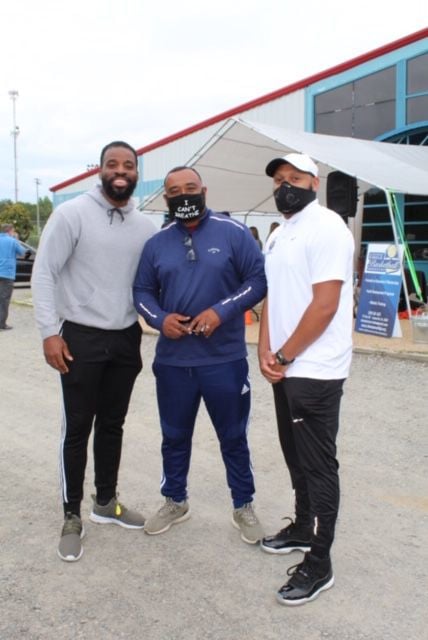 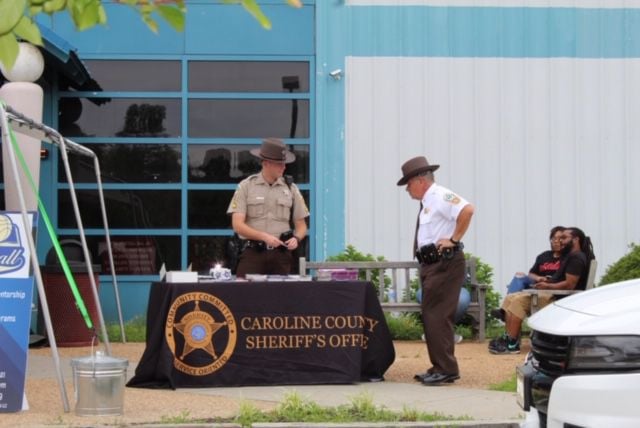 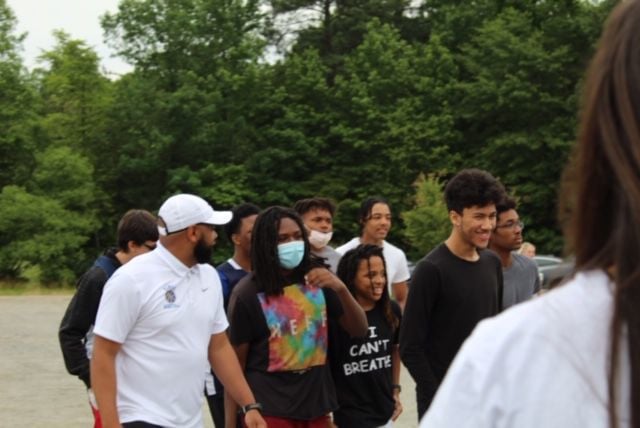 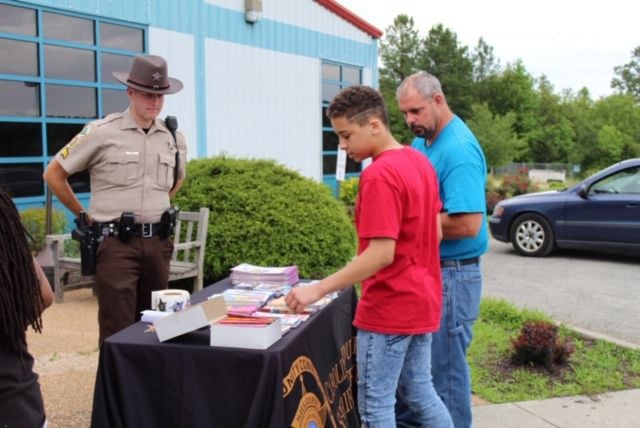 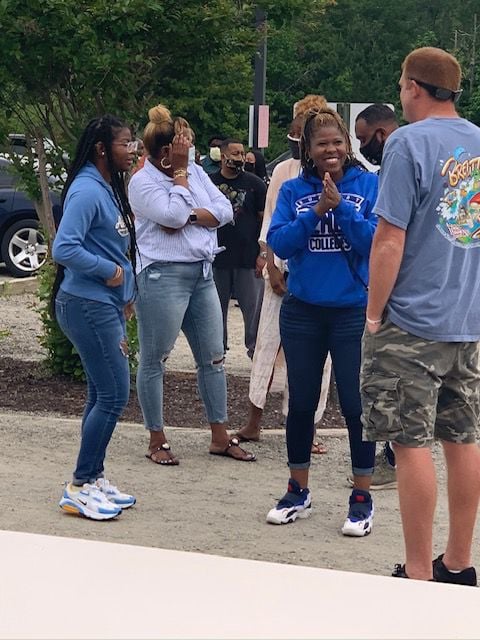 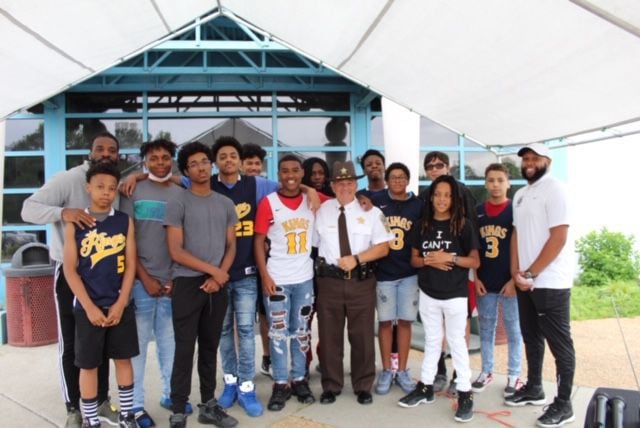 Caroline Sheriff Tony Lippa (center) poses with youth basketball players from the county who turned out for a wide-ranging discussion.

Kadin Pittman sports an ‘I Can’t Breathe’ T-shirt before Monday’s ‘Champions Stand for Justice’ forum on race relations in Caroline.

Caroline Sheriff Tony Lippa (center) poses with youth basketball players from the county who turned out for a wide-ranging discussion.

In the past several weeks, police officers across the nation and the citizens they have sworn to serve and protect have struggled to find common ground.

Frye invited Lippa to Legacy Park Sports in Ruther Glen Monday evening for a question-and-answer session called “Champions Stand for Justice” in the wake of protests around the nation surrounding the killing of George Floyd by Minneapolis police.

Approximately 60 people were on hand as the youth basketball players peppered Lippa with questions ranging from how to respond to a traffic stop to if Lippa or any Caroline deputies view black people as a threat.

King said his motivation behind the event was to give the youth players—all who asked questions Monday are black—the opportunity to have face time with the leading law enforcement figure in the county.

“As a kid, my mother used to tell me every time I stepped out the door that I’m stepping out the door with two strikes being an African-American male,” King said. “So that’s kind of how I’ve prepped to raise my kids. This situation is scary. The motivation behind this event was, ‘How can we grow a community, build a community and bring the kids together so they understand the majority of people do care?’ ”

Lippa answered each question from the players with a few sprinkled in from adult community members. Lippa reiterated his stance from a letter he posted on social media immediately after the Floyd video was released that the knee-to-neck technique used by police officer Derek Chauvin was in violation of the policy of the Caroline Sheriff’s Office and other departments around the nation.

Lippa glanced at Rev. Duane Fields’ mask and it read “I can’t breathe,” one of the final statements Floyd made before he died.

“What happened to George Floyd broke my heart,” Lippa said. “I’m sure it broke everyone’s heart here. I was so emotional I even broke down and cried with my wife and that’s why I wrote the letter because I felt the need to write the letter … I know your Sheriff’s Office does not train anyone to put a knee on a neck.”

Caroline residents held a peaceful protest on the county’s courthouse lawn in Bowling Green on June 2. Five days later, more than 300 gathered in the same location for community prayer.

Monday’s event was the first time Lippa or anyone on his staff answered questions surrounding police relations with blacks in a public setting since Floyd’s death.

Lippa informed the youth basketball players that if they’re pulled over for a traffic stop, they should go to the nearest shoulder of the road. They should keep their hands on the steering wheel “because it puts us both at ease.”

He said mutual respect typically ensures a peaceful outcome. He said that during an interstate stop, it may sound like an officer is yelling but it’s because they’re attempting to talk over the traffic noise and it’s not meant as a sign of disrespect.

He said the radio should be turned down and any passengers should remain quiet. Lippa added that if the driver or anyone in the vehicle is a licensed gun carrier, they should immediately let the officer know. He said passengers should also provide identification if the stop is related to issues such as potential underage drinking.

“Be straightforward with everything, have dialogue and communication,” Lippa said.

The sheriff also stated that drivers have the right to know the officer’s name and badge number. He said if a driver feels threatened, he or she should call 911 or #77 (on the interstate). He said Caroline’s policy is that officers are only to use the proper amount of force to secure an arrest and no more. He said a citizen can file a complaint online or by calling the sheriff’s office.

King said a lack of diversity is one issue he’s concerned about in police units. Lippa noted that 30 percent of the Caroline’s Sheriff’s Office is minority. Two of his four lieutenants are black, but he added recruitment of minorities can be difficult because the pay scale is lower than in surrounding counties.

Lippa said deputies serve at the pleasure of the sheriff and he’s accountable to citizens.

Lippa was also asked by a player does he believe in “white privilege.” He said he can only answer for himself and that he didn’t grow up privileged. He said his family was on welfare and his mother worked three jobs to provide for three sons.

“We, the police, need to regain that trust for all of our people,” Lippa said. “The only way we’re going to do that is for people that have problems and issues, we need to come forward. We need to talk.”