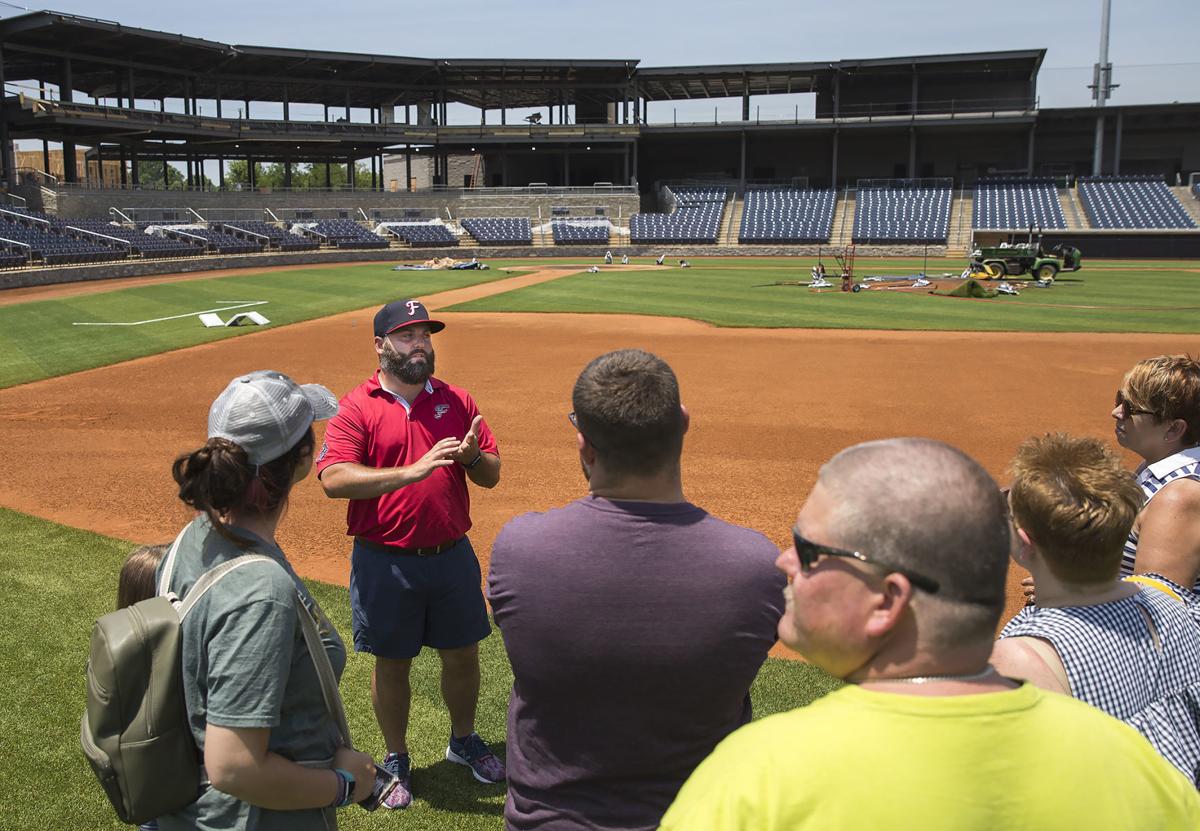 Eliot Williams (in red), the Fredericksburg Nationals’ director of stadium operations, details some of the ballpark’s features. 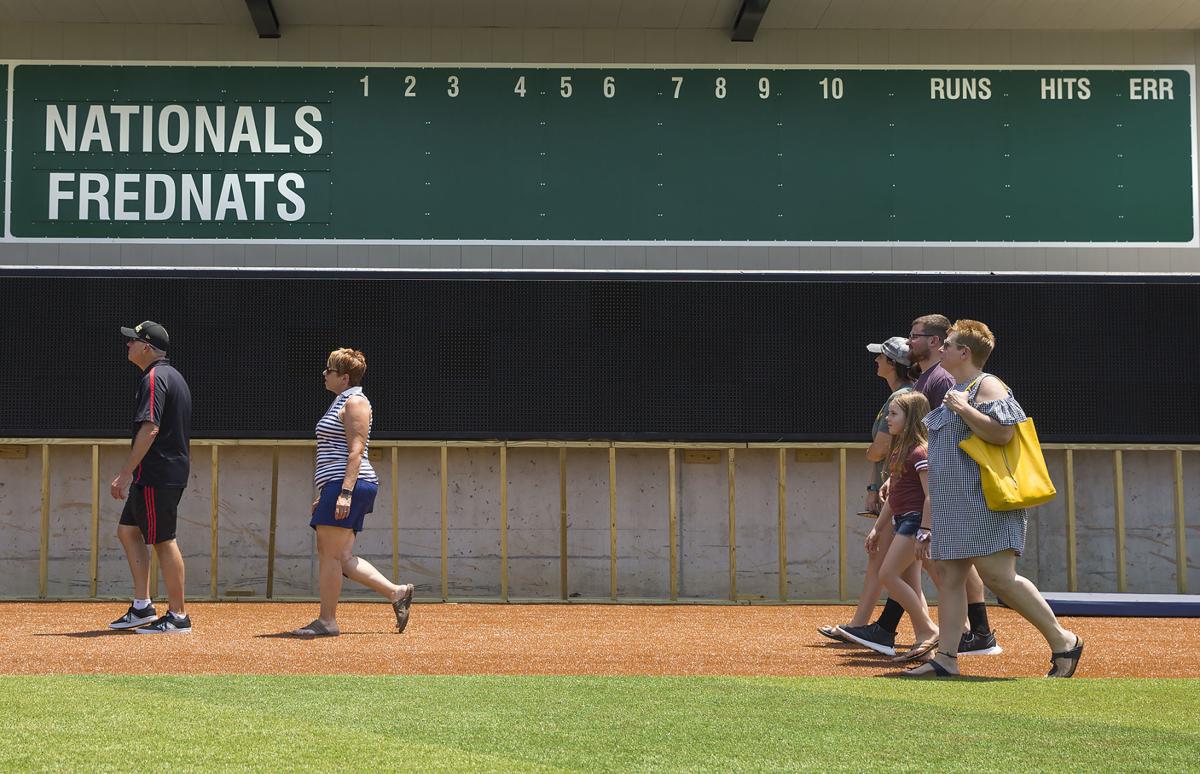 With the scoreboard in the background, FredNats supporters walk along the warning track during their tour. 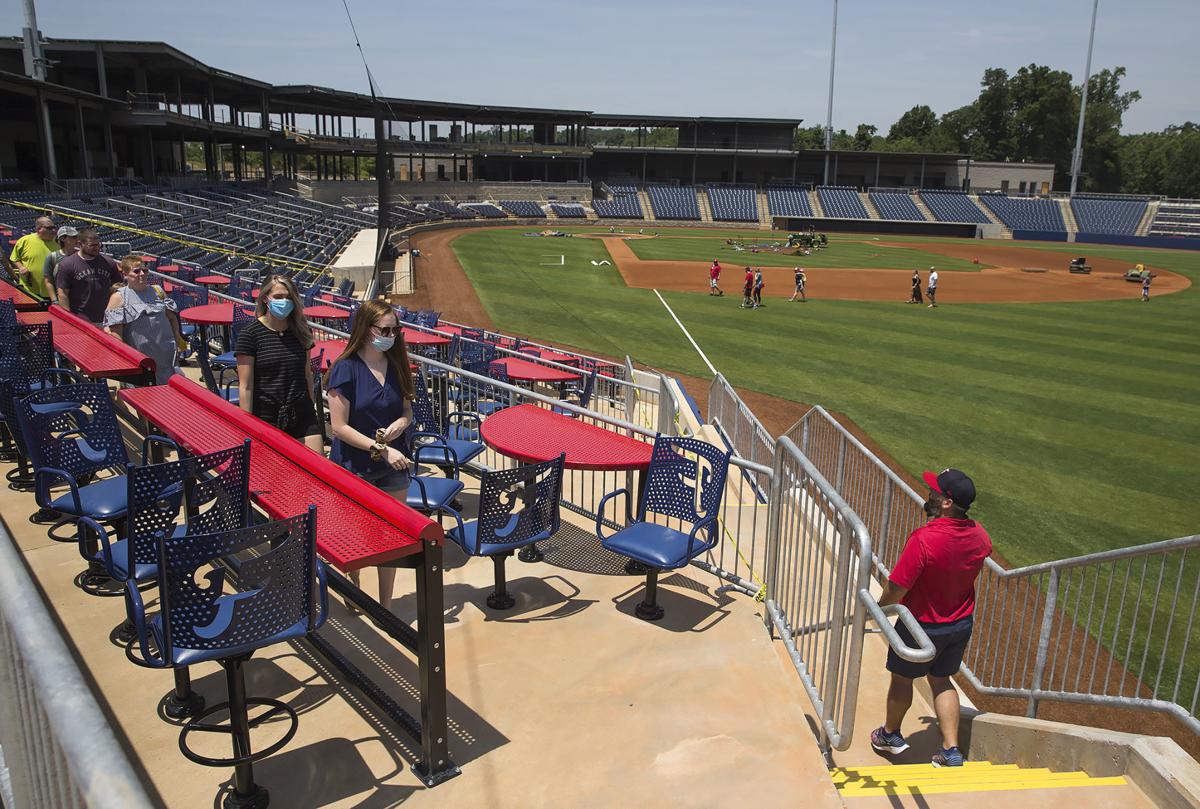 Eliot Williams (right), who served as a tour guide Saturday, leads some visitors down to the turf field.

Eliot Williams (in red), the Fredericksburg Nationals’ director of stadium operations, details some of the ballpark’s features.

With the scoreboard in the background, FredNats supporters walk along the warning track during their tour.

Eliot Williams (right), who served as a tour guide Saturday, leads some visitors down to the turf field.

FOR ALL of the renderings and drone footage, I hadn’t actually seen the Fredericksburg Nationals’ new ballpark until Saturday morning.

With the team offering free stadium tours this weekend from 11 a.m.–5 p.m. (same hours both days), I decided to tag along with one of the early groups. From the first-base line—the visitor’s side if you’re wondering—we descended onto a terrace outfitted with restaurant-style seating before heading down to the field level.

Now, I’m not a turf guy. I like grass stains and bad hops and such. But this particular synthetic surface, which, as our tour guide explained, is only found in two other ballparks nationwide, pleases the eye and footing alike. It might be made of ground coconut fibers, but it looks like grass buffered by a dirt warning track.

Speaking of the warning track, it’s going to require a serious launch angle/exit velo/insert nerdy metric here to go yard. The foul poles are 326 and 327 feet, respectively, 360 and 370 in the power alleys and 402 in dead center. Nationals’ minor leaguers: I hope you’ve been lifting during quarantine.

In straightaway center field, a large concrete wall will serve a dual purpose. From the field, it will serve as the hitter’s backdrop, a solid blue sightline off which batters will pick up pitches. The opposite side, accessible through the stadium’s 360-degree concourse, is educational in nature.

The FredNats are partnering with Germanna Community College to create a timeline of history in Fredericksburg, a narrative that begins during the Civil War, when breaks in fighting would be filled with early iterations of America’s pastime.

There will be plenty of ways to pass the time inside this stadium, trust me. From a suite that allows fans to play official scorer to a seats with a fully outfitted batting cage or a bird’s eye view of the visitor’s bullpen, opportunities for classic minor league shenanigans abound.

“I like going to baseball games with him, but I come for the fun and the food and all that kind of stuff,” said Colonial Beach resident Molly Reip, who toured the stadium with her husband Brian. “Based on the tour, there’s so many opportunities here to just have fun.”

Even life in the cheap seats should be worth the price of admission. General Manager Nick Hall told me that prior to construction, the team commissioned a sun study. As a result, more than 75 percent of the seating bowl will be shaded for a typical 7:05 p.m. first pitch, Hall said. The local aloe market just revised profit projections, and not in a good way.

To be clear, work remains before next year’s season opener. The club level, along with the press box, is still skeletal, as are the clubhouse and team offices. As of Saturday, portions of the concourse were still hard-hat zones.

Wayne Long, 70, emerged from his tour group around 11 a.m. wearing a Washington Nationals mask and curly W hat. Long has been a faithful Washington baseball fan since the mid 1950s.

“A couple teams left us, and when they come back, I’m right on the bandwagon,” he said.

I was asking Long about his enthusiasm for next year when his wife Linda interrupted.

“We’re ready now,” she said. “It’s just a shame everything is shut down.”