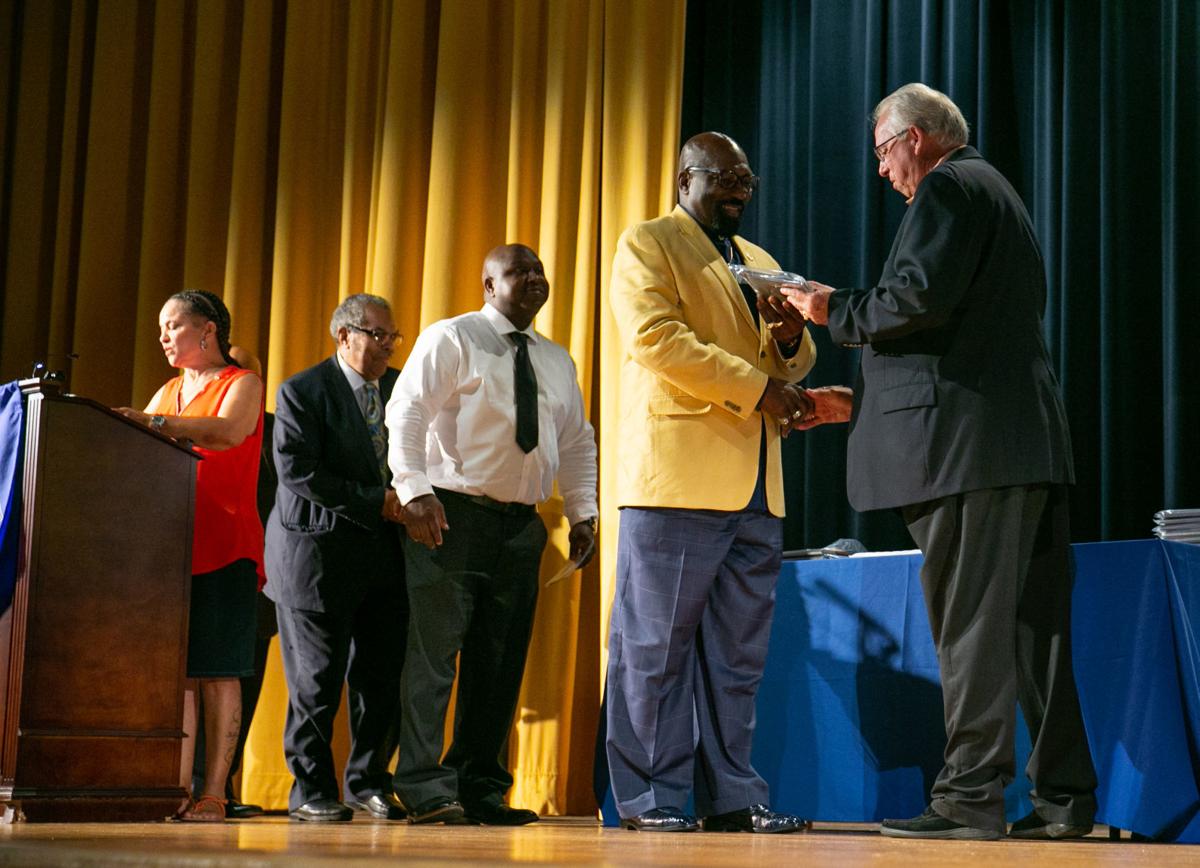 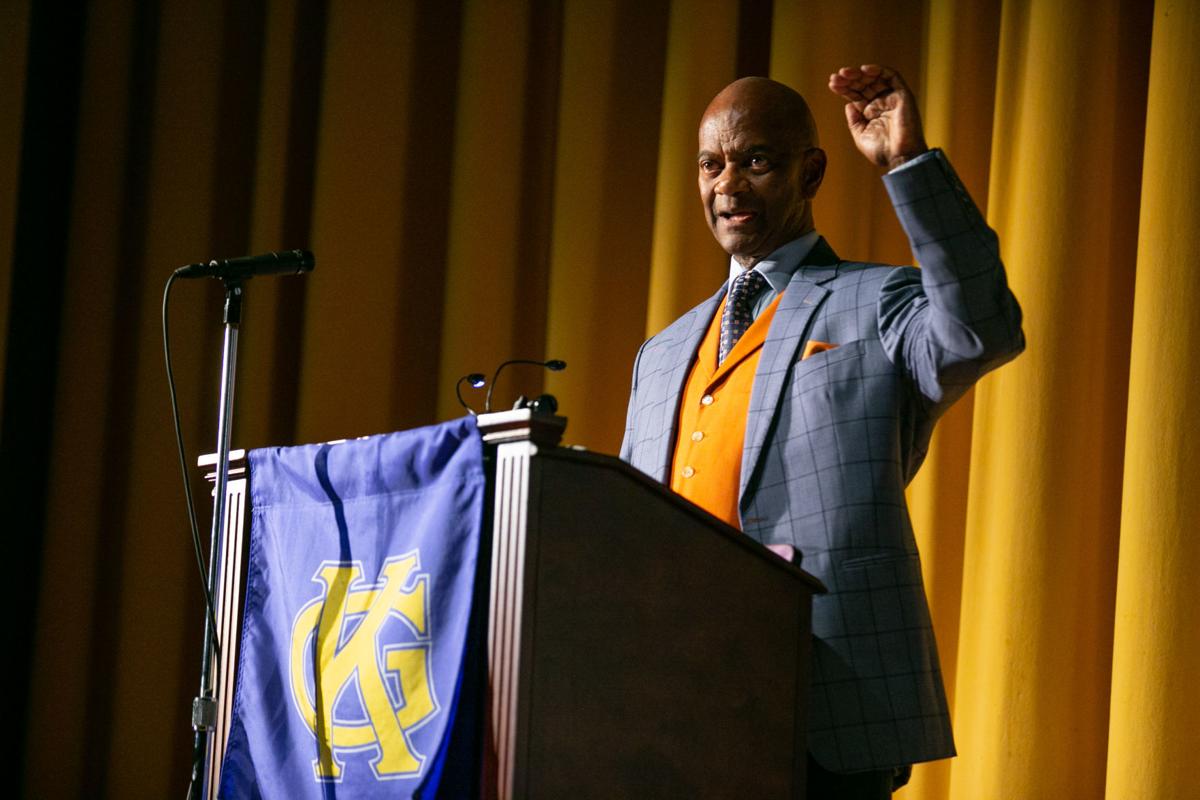 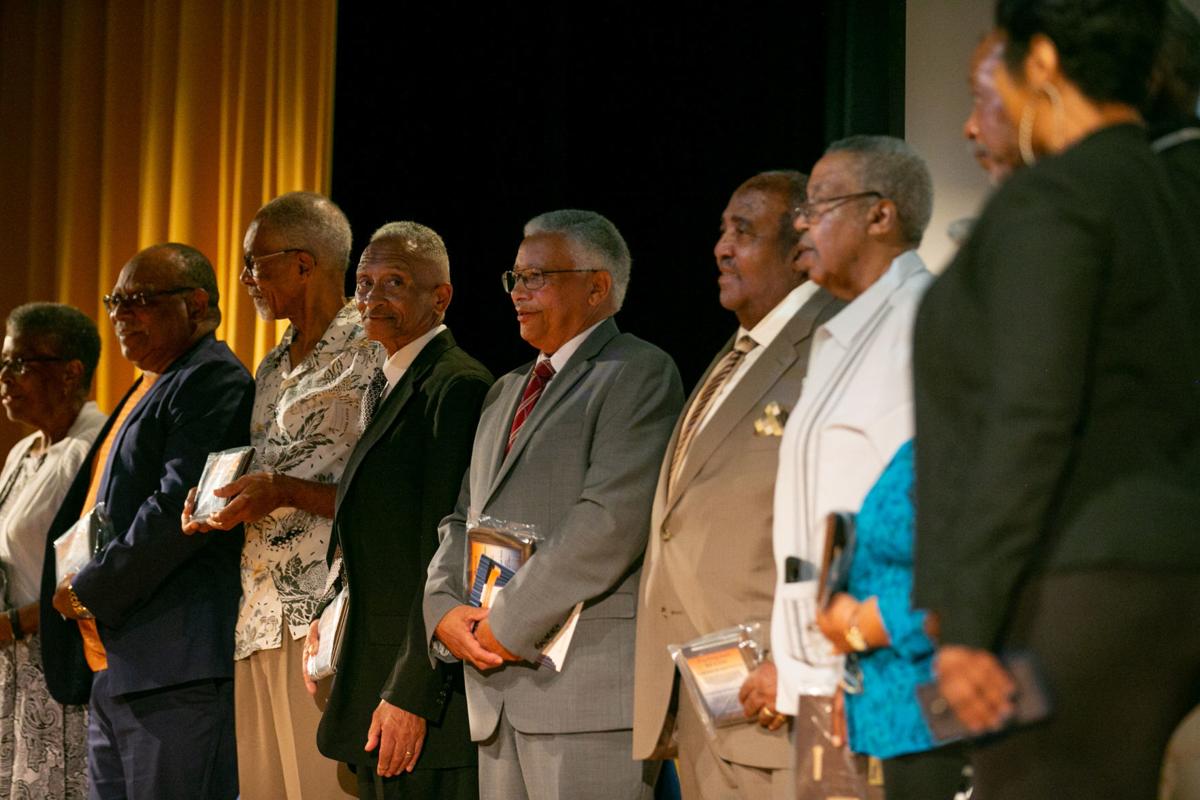 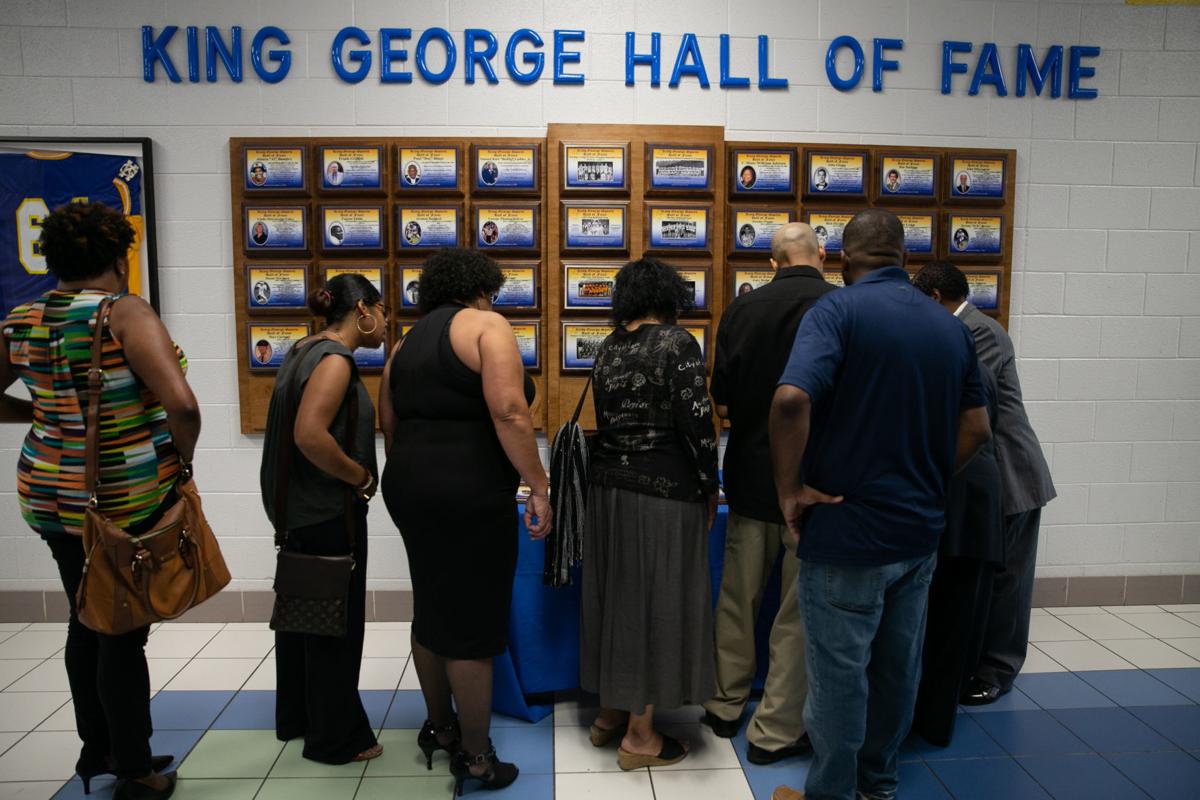 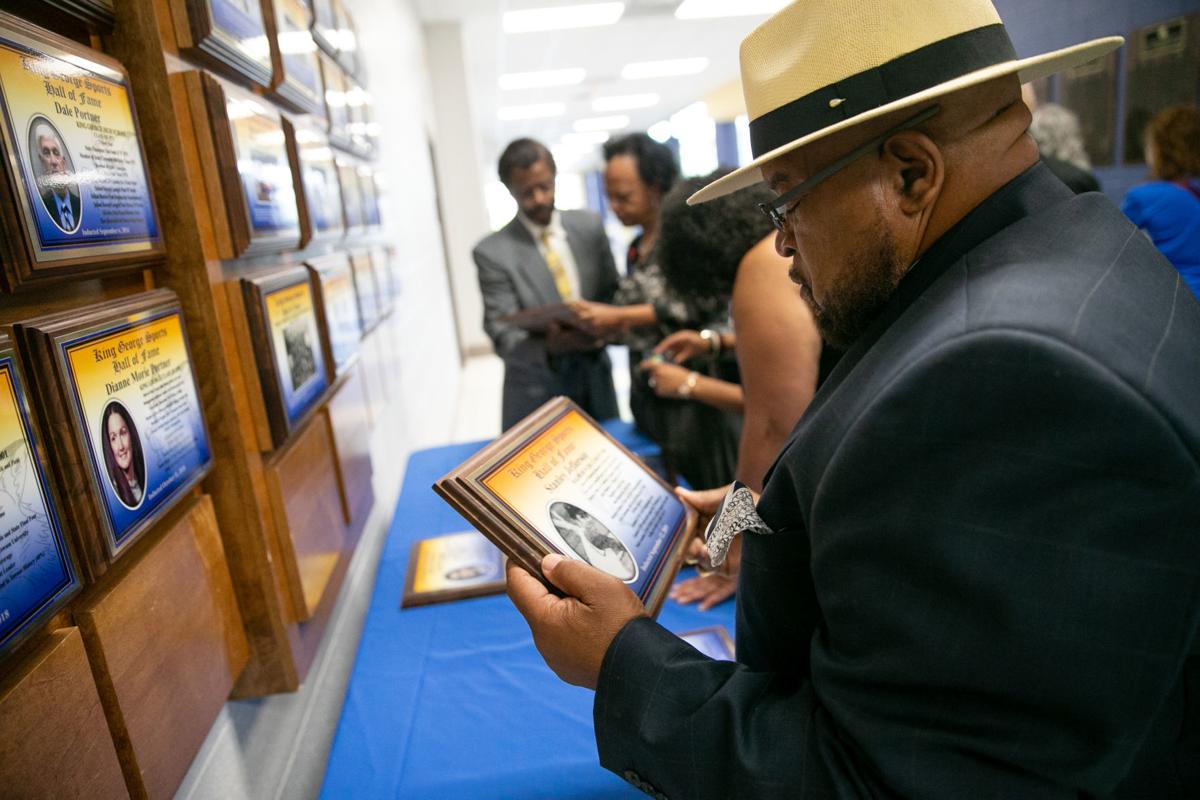 Spencer Pryor, a 1968 grad of the Ralph Bunche School, looks at a distributed plaque. 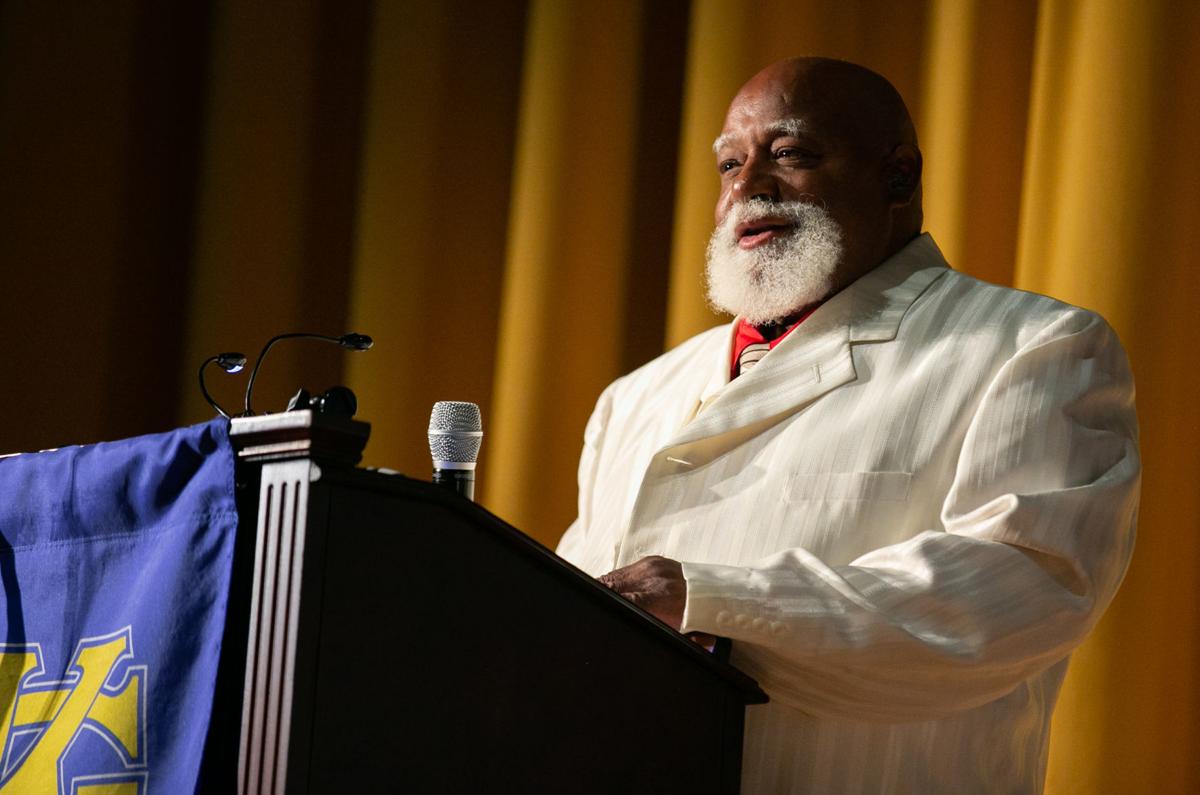 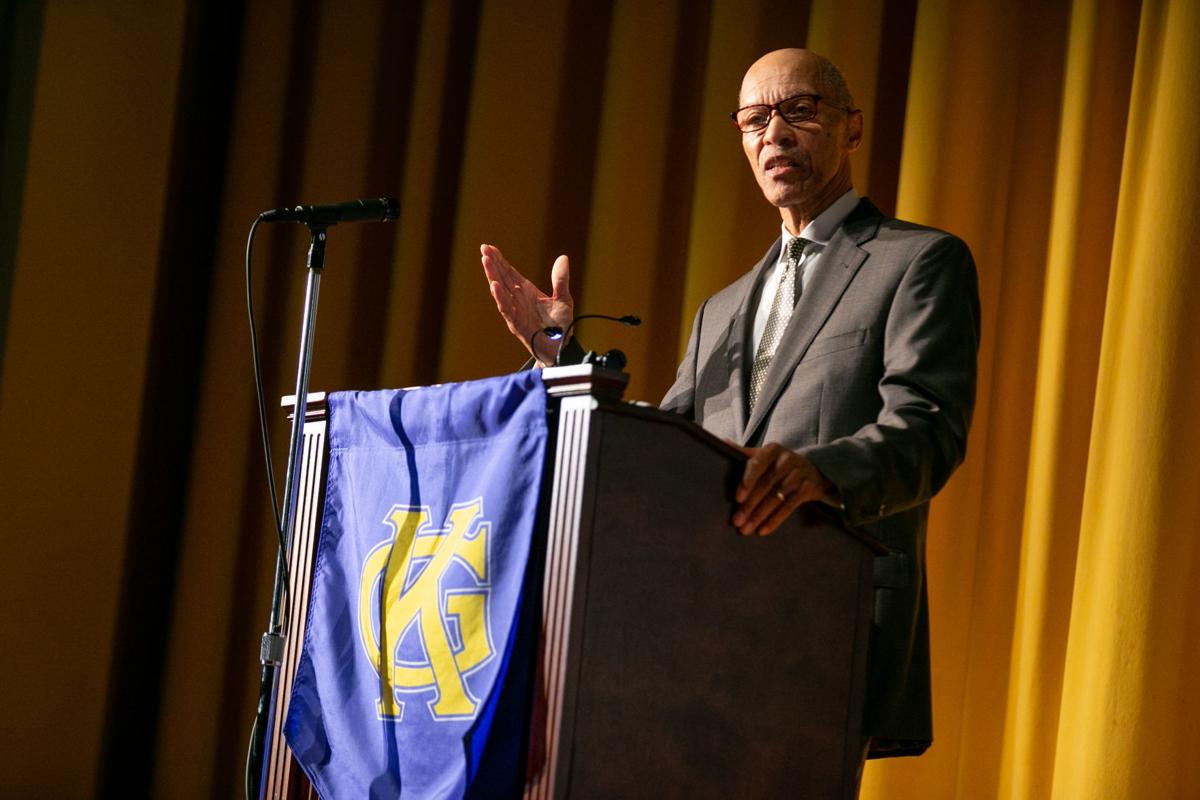 Stanley Jefferson, a Ralph Bunche 1966 graduate who played baseball, basketball and track and field, speaks after being inducted into the King George Hall of Fame. 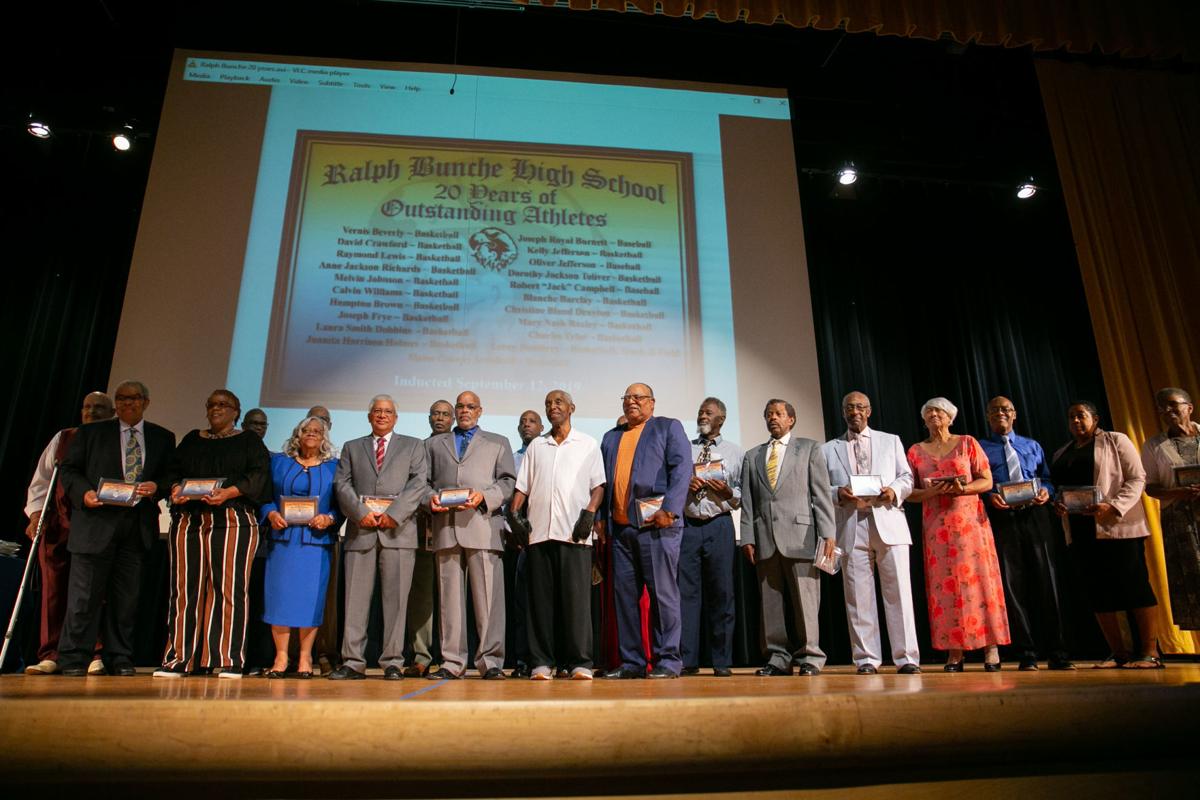 Spencer Pryor, a 1968 grad of the Ralph Bunche School, looks at a distributed plaque.

Stanley Jefferson, a Ralph Bunche 1966 graduate who played baseball, basketball and track and field, speaks after being inducted into the King George Hall of Fame.

After George Toliver was inducted into the King George High School Athletic Hall of Fame in November 2013, he left the ceremony with an uneasy feeling.

Toliver was proud that he was honored for his exploits as a basketball standout in the late 1960s. He went on to compete for James Madison University and later became an NBA official.

But Toliver and his friends who attended to support him were discouraged that there were no pre-integration athletes from the days of Ralph Bunche School, which was King George County’s black school for grades 1–12 from 1949–68.

Toliver, Fitzhugh and Harold “Vinny” Jefferson decided to take action. They formed a committee that would meet with the King George Hall of Fame board and recommend Ralph Bunche athletes worthy of induction.

There was one major problem: None of the Falcons’ records and trophies could be found. They were stuffed in boxes and misplaced when the school merged with King George High School.

The group wasn’t deterred. Hall of fame founder Gary Butler (Toliver’s former high school and college teammate) and others on the selection committee provided a listening ear. And last week, two baseball teams from Ralph Bunche were inducted into the King George Hall of Fame, along with 21 other individual standouts from the school.

Toliver said in a speech at Thursday’s induction that it was a “glorious day” to see so many Ralph Bunche athletes honored, even though several are deceased.

“I in no way intend to imply injustice has been in play,” Toliver said. “I applaud that we have moved the social needle of correction forward, accomplished through a cooperative sound process as a positive community action … and in the name of performance excellence.”

The 1961 Falcons baseball team that defeated Central High 7-1 to earn the state title was inducted. That team was joined by the 1968 squad that reached the state championship game in the school’s final year of existence.

The ’68 team was led by Walter Harrison, who went on to be drafted by the Baltimore Orioles, and Jefferson, who became the first black baseball player at JMU.

Stanley Jefferson, a 1966 Ralph Bunche graduate who lettered in baseball, basketball and track and field, was inducted as an individual.

Melvin Johnson, a former multi-sport standout at Ralph Bunche, said he was stunned when he learned he would be one of 21 to go in as a group.

“It was an honor,” said Johnson, who later became the head basketball coach and athletic director at Eleanor Roosevelt High in Maryland. “I never thought ones from Ralph Bunche would be honored because during that time there was very little coverage of the African American high schools. So there weren’t a lot of records they could go back to find. It was an honor, and it was surprising.”

Toliver attended Ralph Bunche, but graduated from King George. He noted that Ralph Bunche was formed in 1949 as part of Civil Action 631 to provide a “separate but equal” education to black students. In his speech to the Falcons’ honorees, he commended them for persevering through the segregation era.

“Separate but equal did not exist at Ralph Bunche for student–athletes,” Toliver said. “Your buildings, your books, your gymnasiums, your playing fields and equipment were never equal in quality.”

Ralph Bunche fielded baseball, basketball and track and field teams. King George had a football team, but Bunche couldn’t afford to field one.

“Some of the kids there were intrigued,” said Campbell–Moore, who attended Ralph Bunche before integration and graduated from King George. “A lot of kids of this generation have no clue what Ralph Bunche was all about other than their grandparents attended there.”

When schools integrated in the 1968–69 school year, King George immediately had one of its best basketball teams ever. Led by Butler, Toliver and other players from both schools, King George reached the Group 1–B finals, where it lost for the first time all season to Martinsville’s Hardin Reynolds High School.

The camaraderie with his teammates and witnessing their exploits firsthand are among the reasons Butler has a great appreciation for Ralph Bunche athletes.

“We were 15 deep. We averaged 89 points a game and had a 35-point margin of victory,” he said. “A lot of people consider that the best team ever at King George.”

This is the 2019 class of inductees into the King George High Athletic Hall of Fame, which includes two teams and 21 individuals from Ralph Bunche High School: