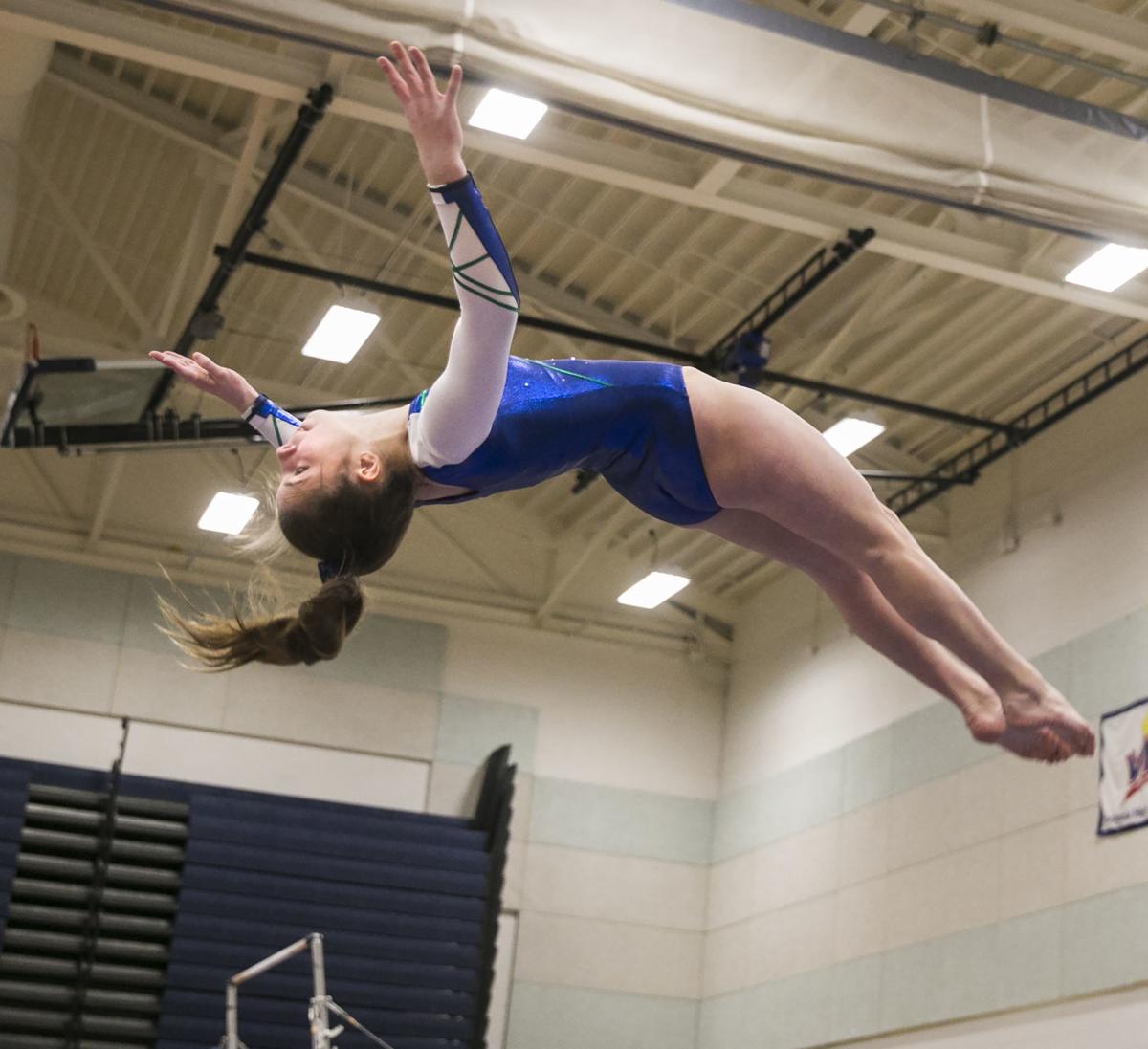 Graceemae Murray of Colonial Forge dismounts at the end of her balance beam routine in the Colonial Forge Winter Fest Invitational on Saturday, Jan. 11, 2019. 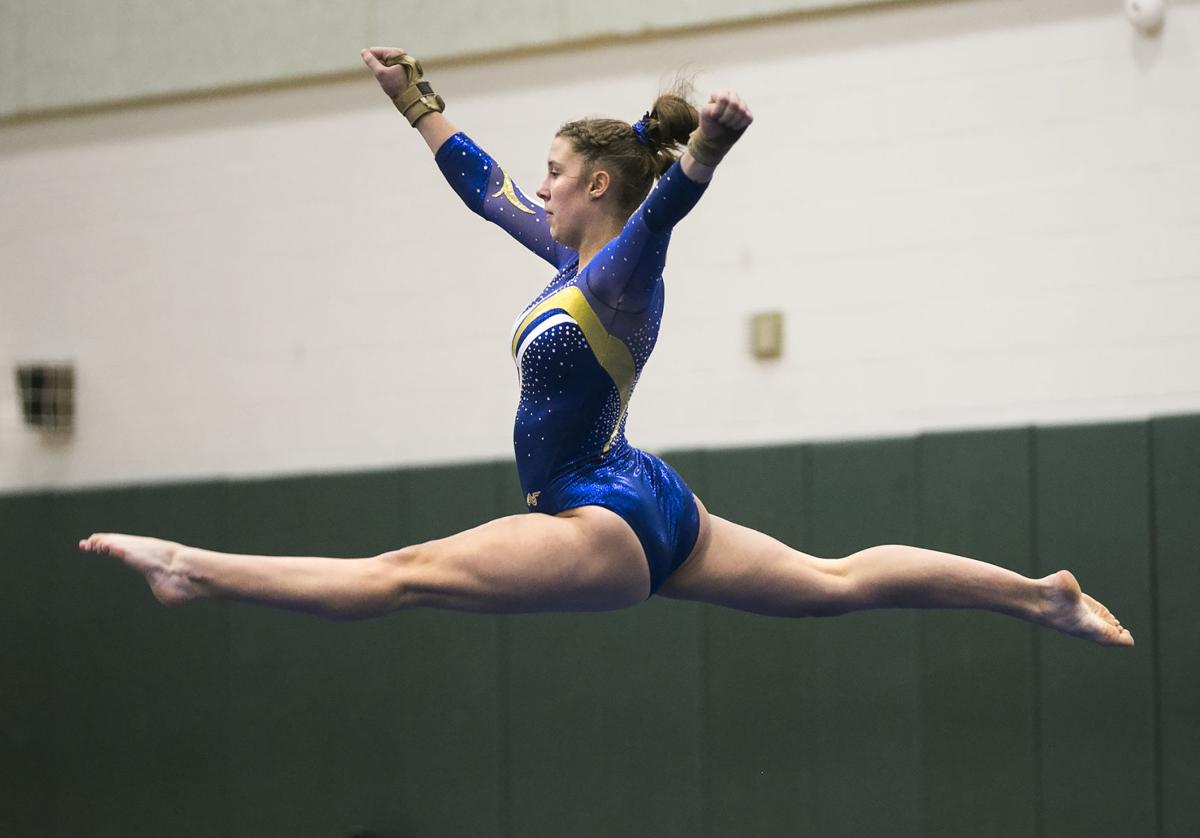 Stafford’s Keagan Habina takes to the air during her floor routine at the invitational at Colonial Forge High School. 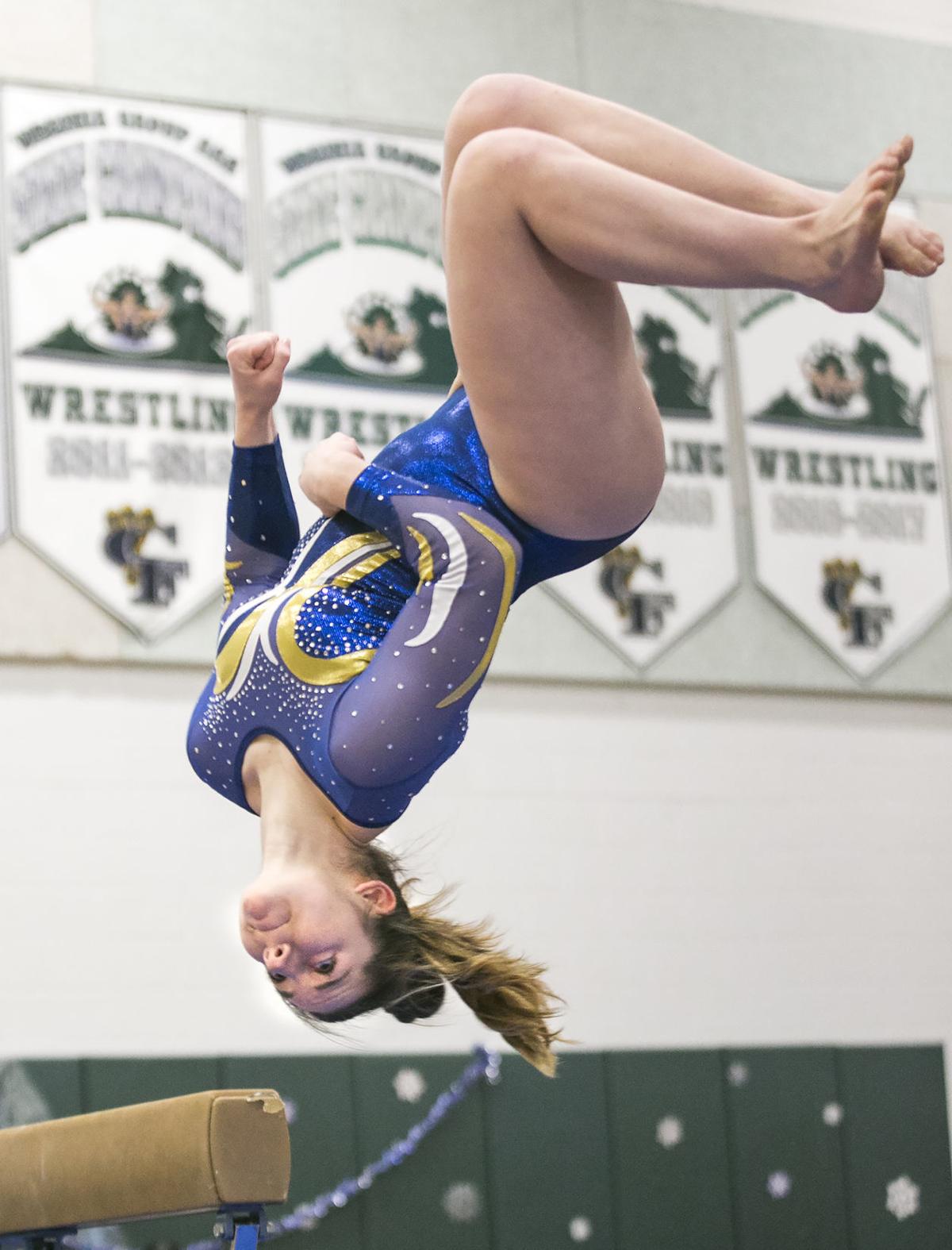 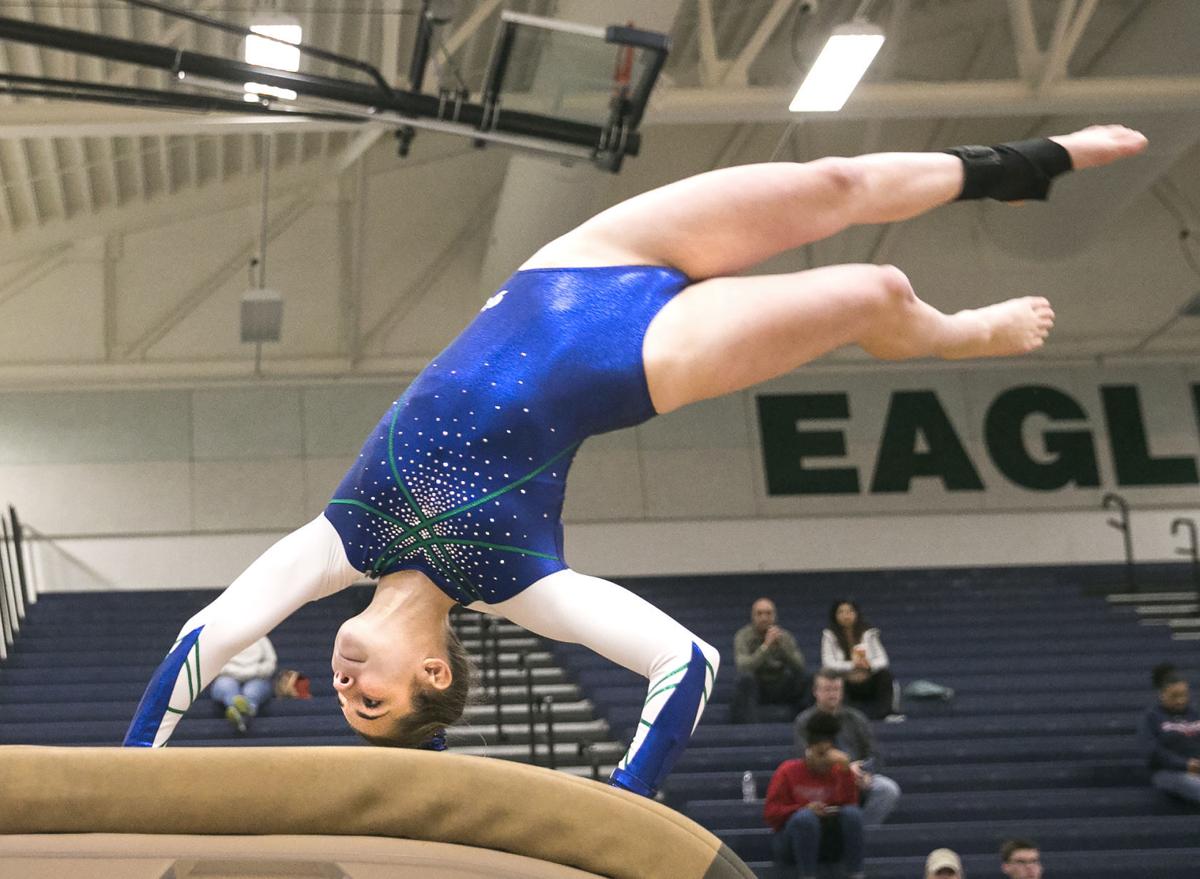 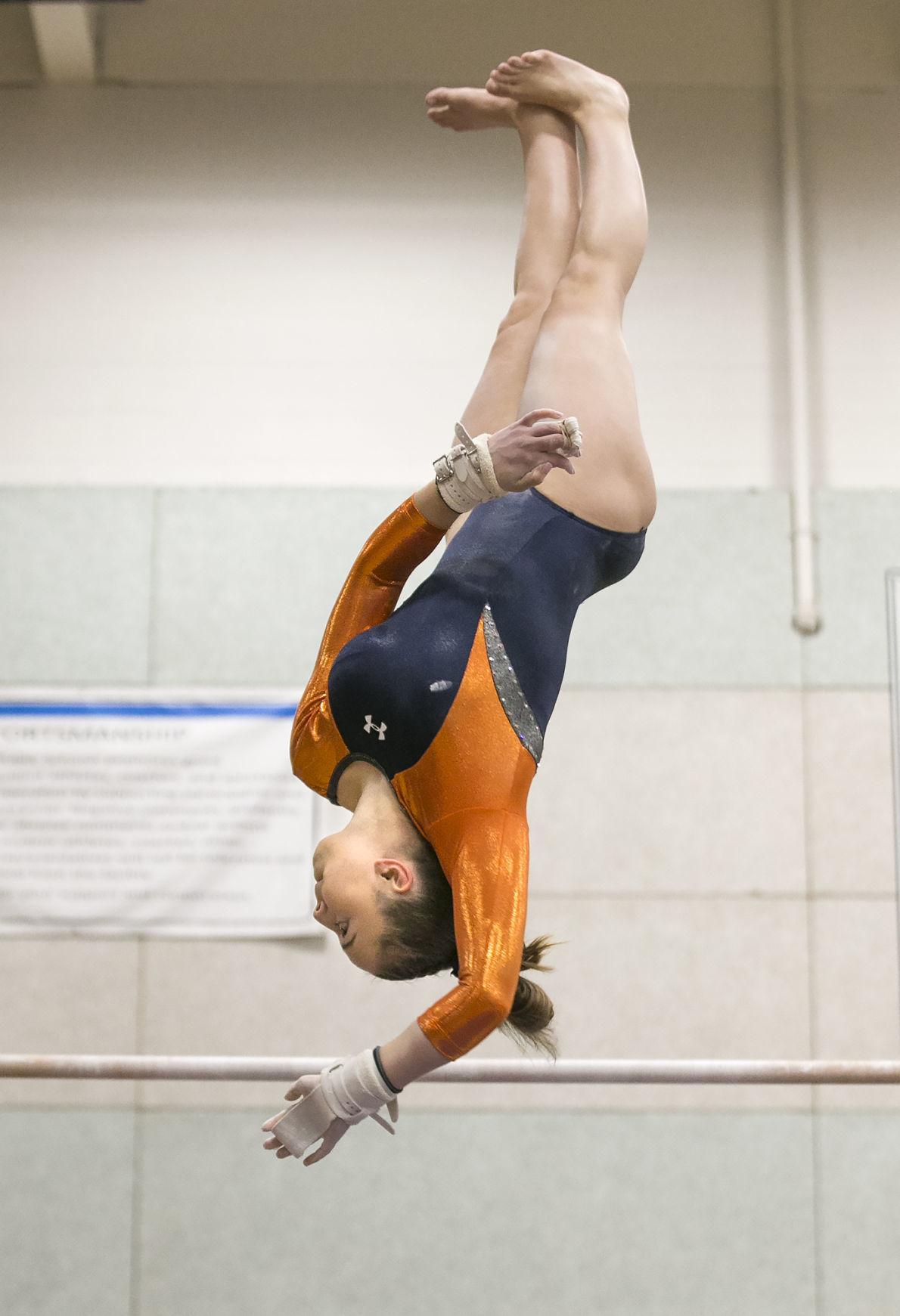 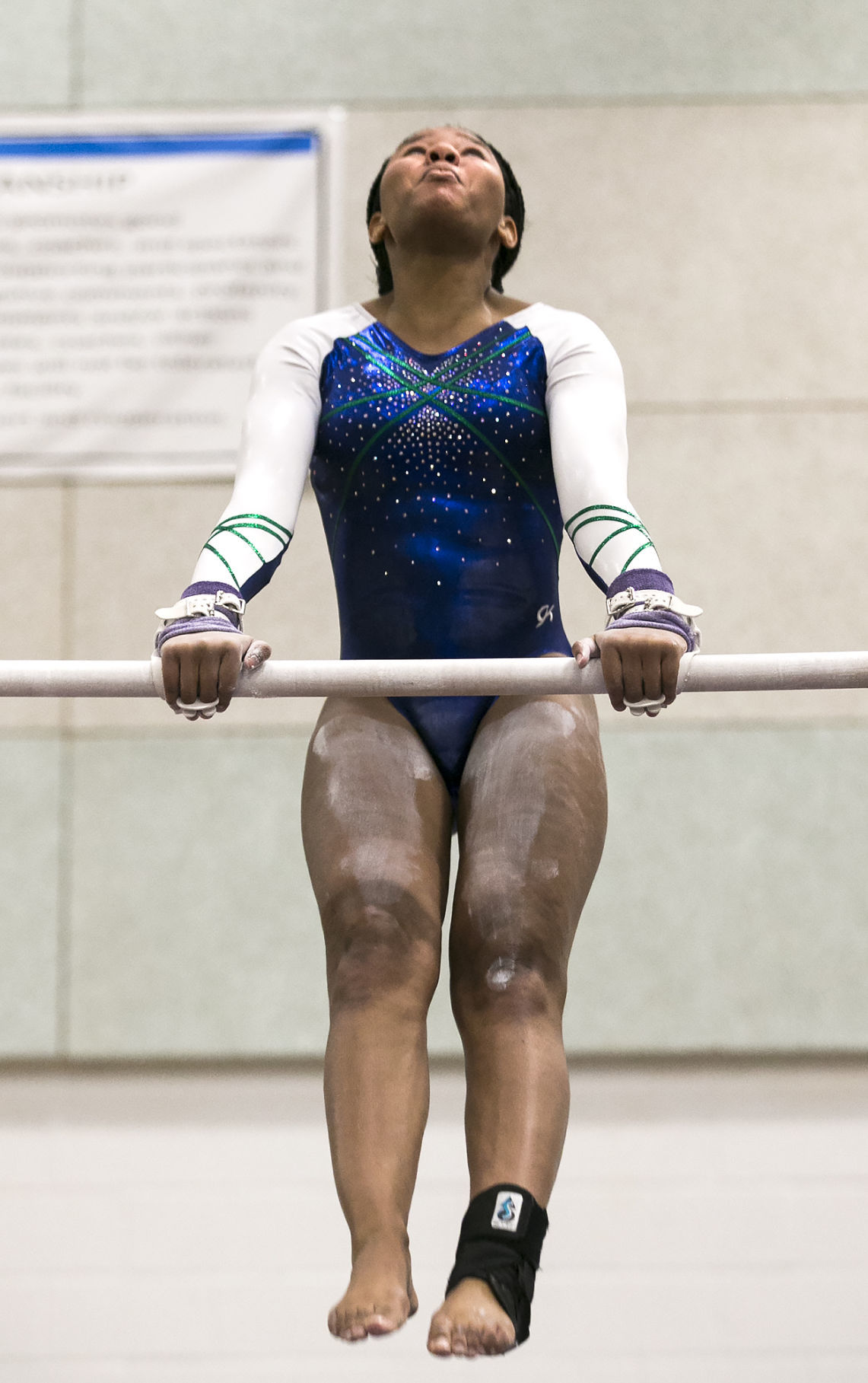 Graceemae Murray of Colonial Forge dismounts at the end of her balance beam routine in the Colonial Forge Winter Fest Invitational on Saturday, Jan. 11, 2019.

Stafford’s Keagan Habina takes to the air during her floor routine at the invitational at Colonial Forge High School.

The eight-team field was divided into two divisions, with North Stafford claiming the silver division title for the school projected to score a lower team total.

Eagles coach Maci Winebarger admitted to being somewhat disappointed in the low turnout. She attributed that to Park View–Sterling hosting an invitational the same day and to the Winterfest meet not being held last season.

“We were hoping for a bigger turnout,’ Winebarger said. “So whoever we get in, we get it. ... Gymnastics isn’t necessarily a popular sport. It just depends on what you got. Sometimes you’re lucky and sometimes [you’re not].”

While some of the schools fielded decent size teams, neither Brooke Point nor Forest Park was able to field a regular rotation lineup for any of the four events. Thus far, Colonial Forge has participated in two invitational meets and one mid-week quad meet.

Concerning her team’s tight battle with Patriot, Winebarger commented: “They are pretty good. They had a lot more than I thought they did. They performed well. ... We are performing much better at this point than we were at this point last year. So I’m pleasantly pleased.”

Spain medaled in every event, including a third on vault and second in all-around.

“I felt pretty good today,” she said. “I wish I had stayed on the beam today, but overall, my performance was good. Our team is getting closer and working together. We’re all upgrading our skills.”

Both Spain and Wineberger agree the team needs to work on both its choreography and higher-scoring skills of its floor routines .

“Bre did very well,” Wineberger said. “She had a fall on beam which was unfortunate and we watered down bars a little, but she has a club meet [in Arlington] in four hours. Gracee is in the same boat [a club meet). She has an awesome meet today. She hit 4-for-4 [of all events she competed in] and I couldn’t be prouder.”

Stafford put up a gallant effort to stay competitive, but the Indians could not overcome the early loss of standout Kameryn Daniels. The junior was warming up for her first routine on the beam, but she fell and sustained a possible broken left foot. Her availability for the rest of the season is in doubt, according to Indians coach Shawn Thurston.

“Obviously, the girls were taken aback,” she said. “But they responded well and put forth their best routines.”

Both Sophia Housand of Stafford and Mackenzie Fox of North Stafford were pleased with the respective all-around titles that they captured.

“It wasn’t my strongest meet, but I was happy with what I did,” Housand said. “As a junior, I have to step up and help the sophomores and freshmen. [The coaches] are always reminding us that it is a team sport and we need to pull our part.”

“I’m very proud in how we did. This is the biggest competition we’ve had so it was really good to get the experience for everybody,” she said. “I know we can do better with more practice.”

About the impact of Daniels’ injury, Fox said: “It’s definitely nerve-wracking. But you have to focus on the numbers that you have done. And you realize sometimes those things just happen.”

Normally competing in all-around, Zara Christopher made the most of the three events she did compete in, scoring meet high scores on floor exercise (9.525) and vault (9.5).

“[This is] definitely less serious than a club meet. It is a warmup because I do bigger skills there [at club competition],” the Mountain View gymnast said. “I wanted to be at this one because high school gymnastics is really fun.”

All five Stafford County schools have their sights set on the upcoming Commonwealth District Class 5 regional meet scheduled Feb. 5 at North Stafford and the Class 6 regional meet set for Feb. 10 at Colonial Forge.