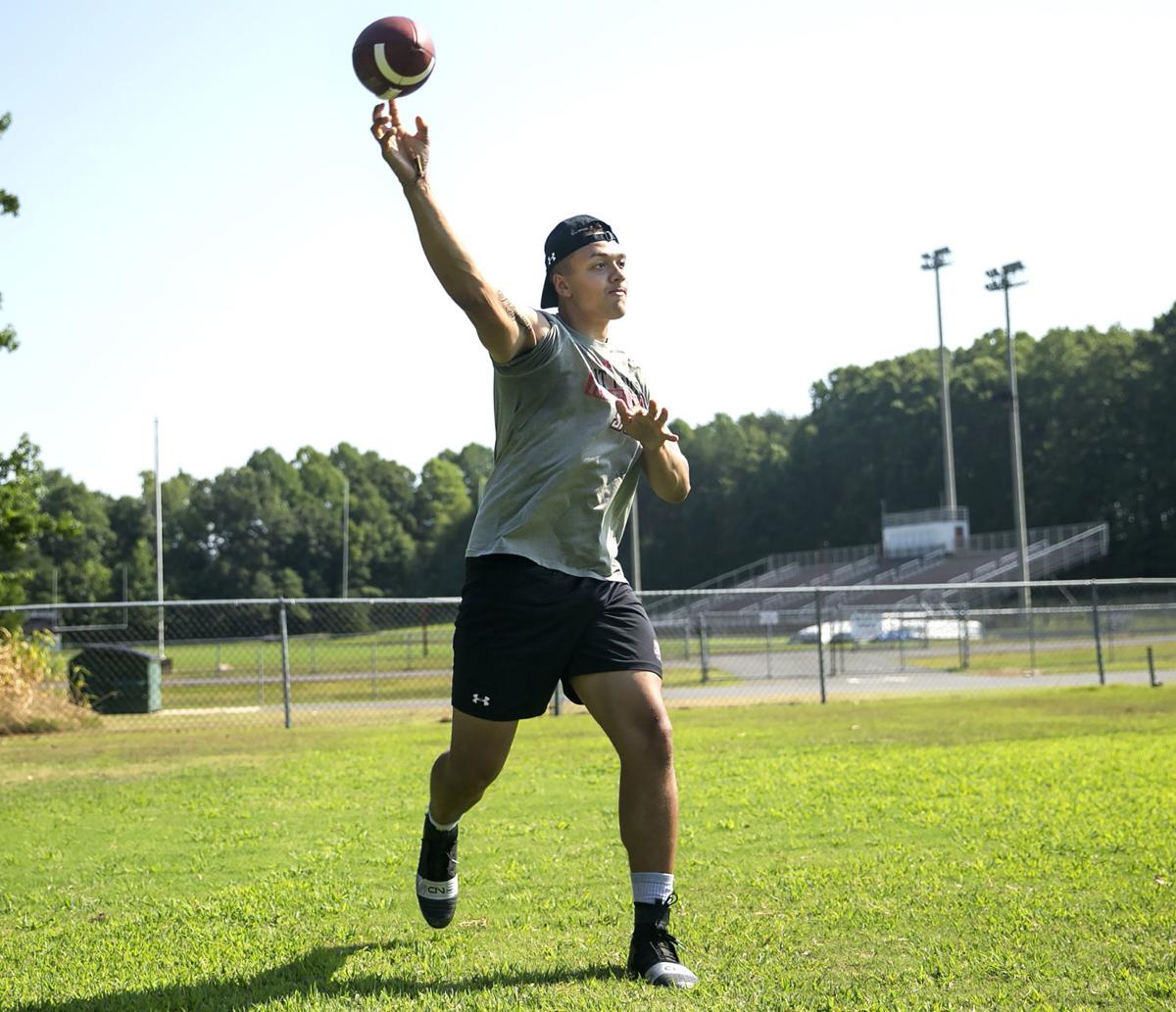 Jason Brown (left) tosses a pass to former Chancellor teammate E.J. Jenkins during a workout at the Spotsylvania County school. The two are now teammates at Saint Francis (Pa.) University. 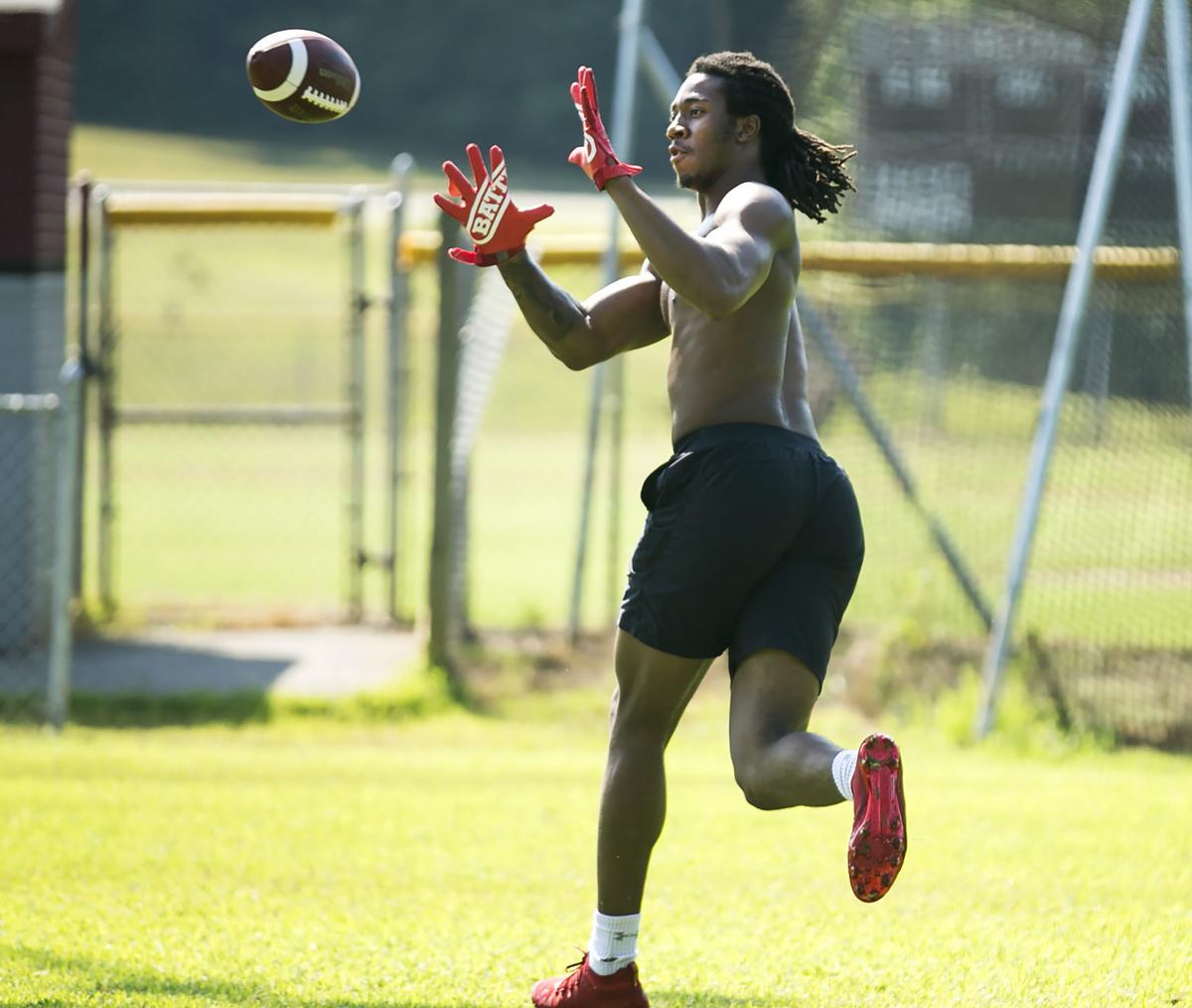 E.J. Jenkins catches a pass from former Chancellor High School teammate Jason Brown at the Spotsylvania County school on Monday, July 29, 2019. The two are now teammates at St. Francis (Pa.) where Jenkins hopes to be a receiver and Brown is seeking the quarterback position.

Jason Brown (left) tosses a pass to former Chancellor teammate E.J. Jenkins during a workout at the Spotsylvania County school. The two are now teammates at Saint Francis (Pa.) University.

E.J. Jenkins catches a pass from former Chancellor High School teammate Jason Brown at the Spotsylvania County school on Monday, July 29, 2019. The two are now teammates at St. Francis (Pa.) where Jenkins hopes to be a receiver and Brown is seeking the quarterback position.

As Jason Brown was sulking through the darkest time in his life, it helped to have a familiar face just across the hall.

The former Chancellor star quarterback suffered a torn ACL in a spring 2017 all-star game and was unable to practice with his teammates at Saint Francis (Pa.) University—the school he signed a national letter of intent with earlier that year.

Brown’s activity level in 2017 was hindered because of the injury, but he maintained the same eating habits. The result: he ballooned to 260 pounds and no longer resembled the 6-foot-2, 180-pound dual-threat that had the Red Flash coaching staff so enthralled.

When Brown finally took the field in the spring of 2018, his weight was up and his morale was down.

“It was rough,” Brown said. “I thought about quitting football.”

But Brown’s teammate, Saint Francis wide receiver E.J. Jenkins, has been one of his best friends since sixth grade at Freedom Middle School in Spotsylvania County.

They went on to set numerous records as a quarterback–receiver tandem at Chancellor.

Jenkins helped keep Brown afloat and this season their relationship has the potential to pay off.

Brown has dropped 25 pounds and is demonstrating the mobility and strong arm he had at Chancellor. He worked with the Saint Francis first-string offense for spring practice and began fall camp on Friday with the top unit. Jenkins (6-foot-7, 235 pounds) is slated to be a starting receiver.

This summer they’ve continued to hone their chemistry as they prepare for what they hope are simultaneous breakout seasons.

“I hope it plays out that way,” Jenkins said. “Every time he throws a touchdown I have little flashbacks of childhood memories. It’s just a great feeling to be able to celebrate with your brother. Not everybody gets a chance to do that.”

Jenkins had faith he and Brown would eventually emerge at the college level. At Chancellor, Brown set school records in career passing yards (6,051), touchdown passes (71), total touchdowns in a season (41) and touchdowns in a game (seven).

They lived across the hall from each other as true freshmen but have been roommates the past two years. Jenkins was there to pick Brown up as he slipped into despair.

“He was depressed for a while,” Jenkins said. “But I was just motivating him every day and I knew he was going to get back. I knew he was a fighter. I knew he wasn’t going to stop until he got back to where he wanted to be.”

Brown appeared sparingly in six games last season as a redshirt freshman and completed 2 of 8 passes, including a 38-yarder. Jenkins appeared in nine contests and hauled in five catches for 52 yards and a touchdown.

Brown found Jenkins for a scoring strike in the team’s spring game.

Saint Francis offensive coordinator Marco Pecora, who recruited the pair, said both have tools he’s eager to explore this season.

Pecora said Jenkins is a “joy to coach” because he’s a bit of a throwback in that he quietly goes about his job with no griping to coaches or teammates.

“He doesn’t say much and he does everything you ask him to do,” Pecora said. “If he doesn’t do it the right way the first time, he’ll line back up and try again.”

Pecora said Jenkins’ size makes him a prototypical target in the red zone, but the coaching staff is working on developing him into a complete receiver. He said Jenkins’ strongest attribute (his size) is also his biggest hindrance because he’s yet to fully learn the nuances of the position. He’s been able to use his physical dimensions to overpower opponents and that’s no longer the case.

Pecora said despite Jenkins’ size—he’s added 45 pounds of muscle since high school—there is no thought about converting him into a tight end.

“We don’t have any inclination right now to move his position,” Pecora said. “We’re trying to get him to be the best receiver he can be in terms of route running and catching. He has so much room to grow we don’t want to hinder anyone’s growth by moving them around too much.”

Pecora said Brown “has done a great job off the field of preparing his body for the demands of the sport.”

He said this past spring Brown made great strides in learning the mental aspect of playing college quarterback. Brown said this summer he’s also been working on his footwork and “truly understanding a defense.”

Brown said in high school, Jenkins went deep and he simply launched the ball and expected a catch to be made.

Although Brown said college isn’t that simple, Pecora said he’s thrilled to see many of the traits he noticed about Brown in high school resurfacing, especially his mobility.

“I want him to focus on marginal gains every single day and just work to be the best player he can be and the best teammate he can be,” Pecora said. “The greatest thing about coaching him is that there are no limits to his ability and no physical demand he can’t match. It’s just about harnessing his talent, playing within the scheme and playing for his teammates.”

Summer may be a time for most people to relax, but it can be a crucial training period for athletes. Each Sunday this summer, The Free Lance–Star will feature a local athlete who's preparing for a significant role with his or her team during the upcoming season.