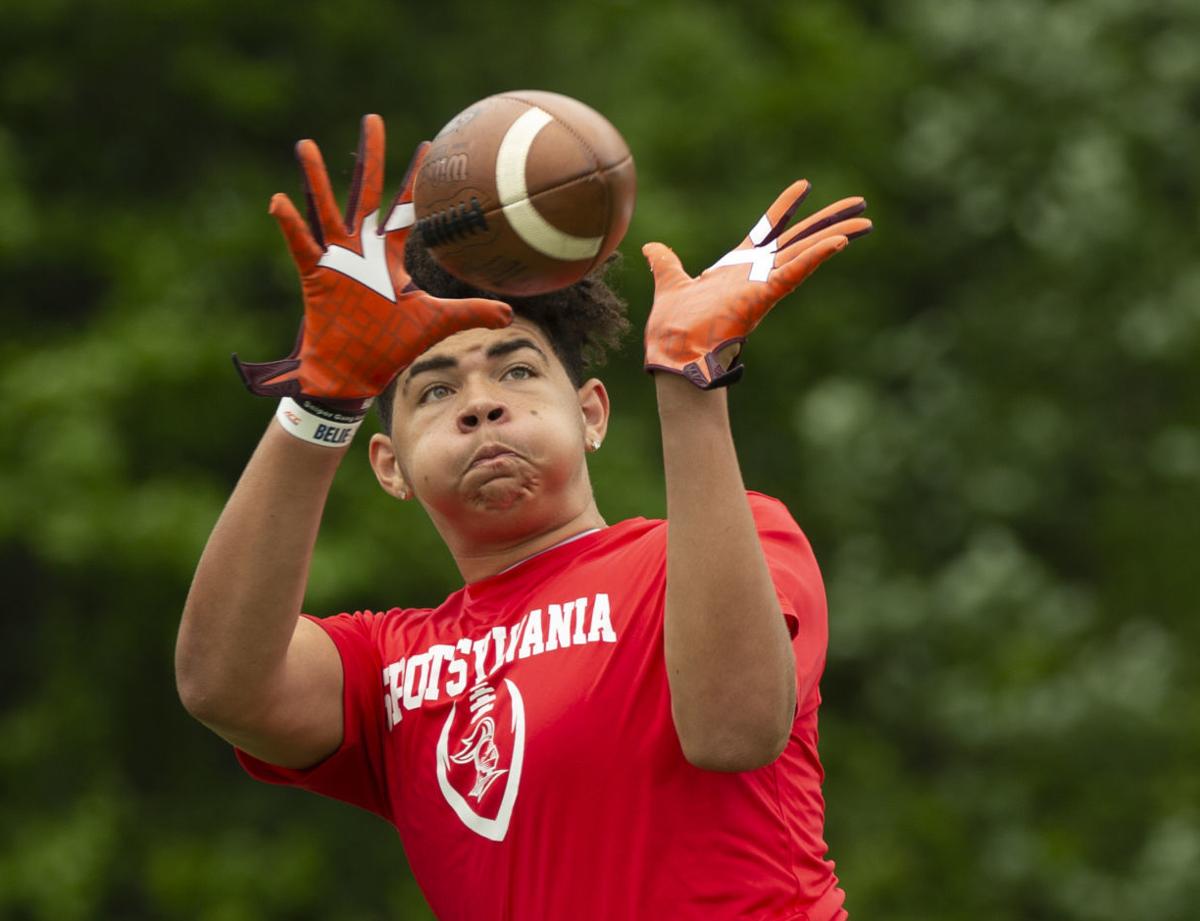 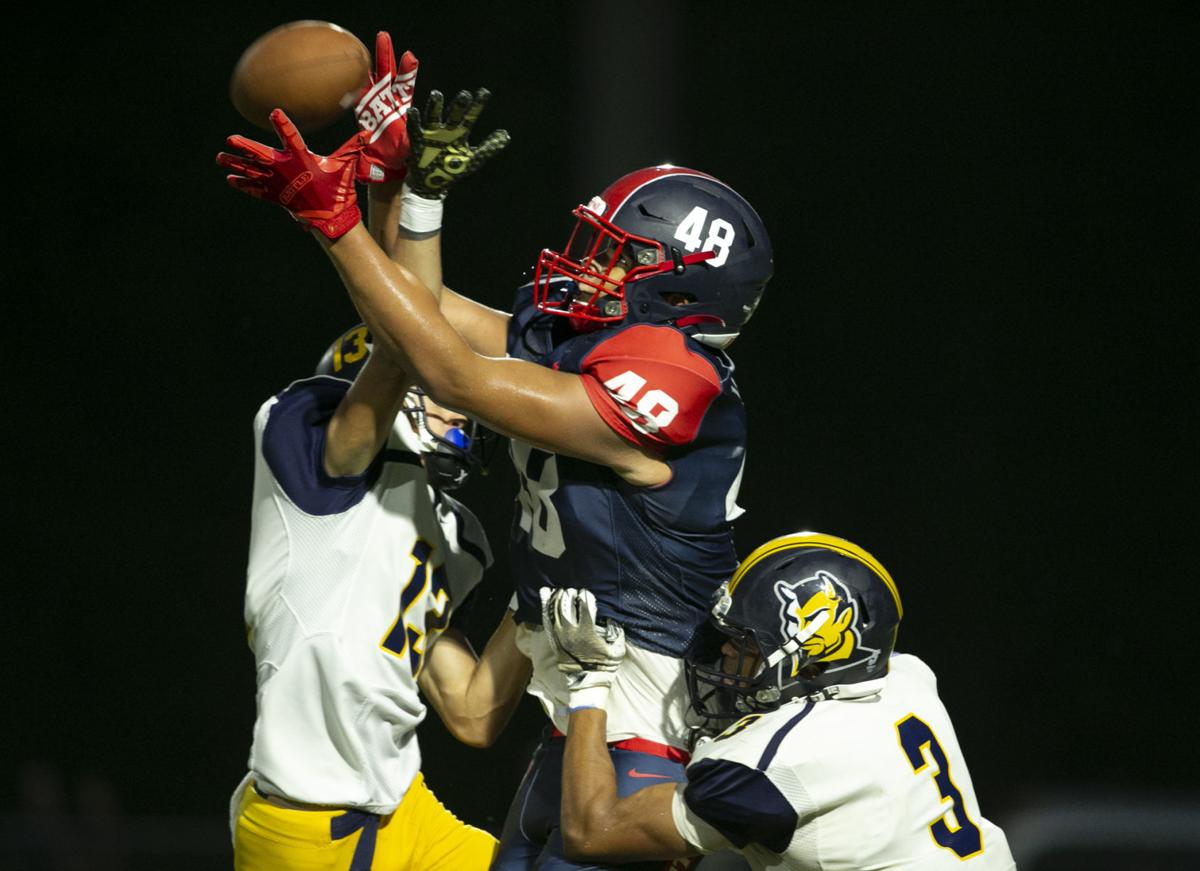 Barnwell (middle) shows his size and leaping ability in a 2019 game against Culpeper. 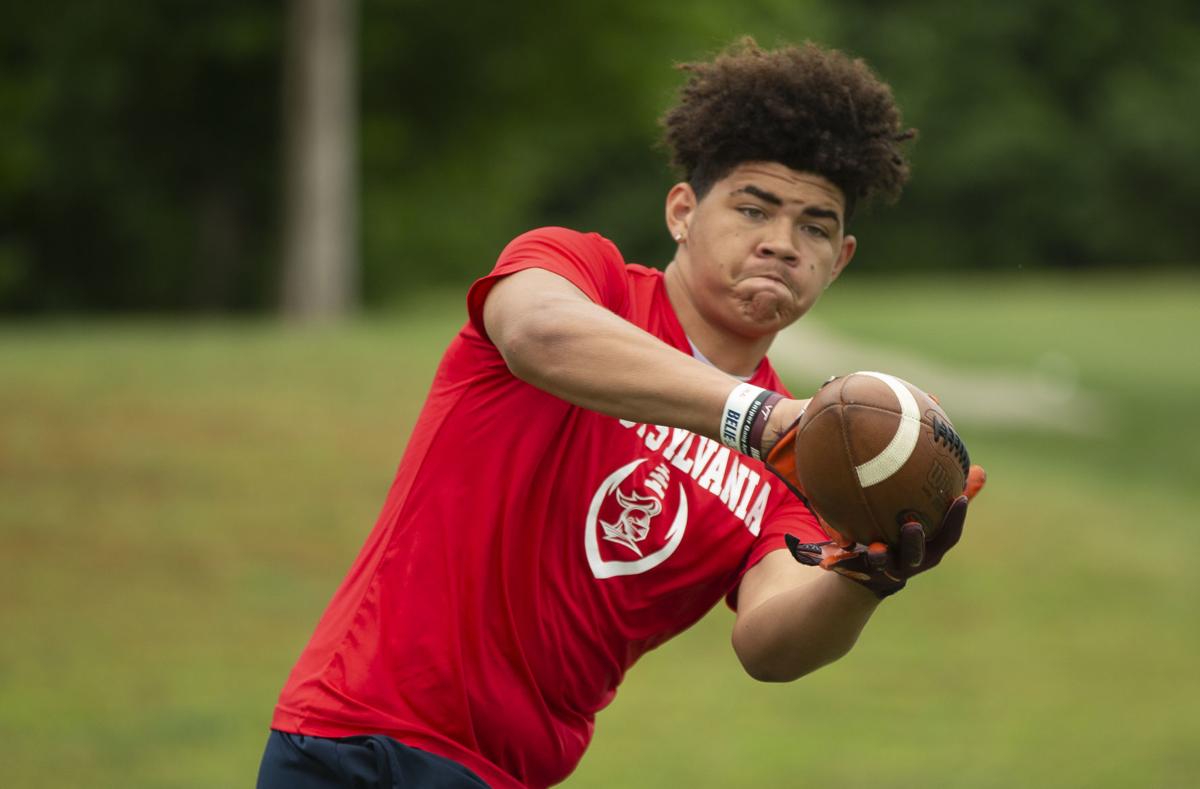 Mathias Barnwell catches a pass during a workout at Patriot Park on May 29, 2020. Barnwell committed to Penn State.

Barnwell (middle) shows his size and leaping ability in a 2019 game against Culpeper.

Mathias Barnwell catches a pass during a workout at Patriot Park on May 29, 2020. Barnwell committed to Penn State.

Barnwell had scholarship offers from other FBS programs at the time, but hearing from the Nittany Lions was extra special.

Barnwell was coached by the father of former Penn State running back Ricky Slade in American Youth Football. He was in awe of the atmosphere on a visit to the State College, Pa. campus.

“Penn State has always been a dream school for me,” Barnwell said at the time.

Barnwell was prepared to orally commit to the Nittany Lions as early as January, but his family advised him to wait.

The rising sophomore didn’t wait long. He announced his oral commitment to PSU Monday afternoon with a video on Twitter. Barnwell becomes the seventh standout from the Fredericksburg area to commit to Penn State since 2012.

“They’ve been at the top of my list since they offered me back in October,” Barnwell said. “I had to convince my parents because it’s early and they didn’t really support it. But we talked about it for a few months and they budged. They support it, and now we’re Nittany Lions.”

Louisa graduate Brandon Smith is a rising sophomore linebacker for the Nittany Lions and former Riverbend offensive lineman Will Knutsson, who finished his career at McDonogh School in Maryland, is a redshirt sophomore.

“I think that our area and the whole state of Virginia is highly slept on,” Barnwell said. “And I feel like [Franklin] took a chance to come down here and recruit our area more and he found the athletes that can play at the next level. I grew up watching Ricky Slade [at C.D. Hylton in Woodbridge] and I grew up hearing about Devyn Ford and my cousins played against Yetur. I always heard about them so I felt it was only right I kept the tradition going.”

Barnwell said he has no concerns about committing early. College head coaches and position coaches routinely change jobs, and there’s no guarantee the staff that recruited him will be on hand when he’s scheduled to arrive in 2023.

NCAA rules prohibit Barnwell from signing a national letter of intent until December 2022.

Spotsylvania head coach Jeremy Jack said although the timing seems early, Penn State is the best fit for the player known as “Mega.”

Jack said Barnwell was not only a big target in the Knights’ limited passing attack, but he was a strong blocker as he finished the season with 19 pancakes. Jack said Spotsylvania is exploring a more diverse offense next season that will feature Barnwell more often.

Despite Barnwell’s commitment, other schools likely will continue to pursue him. He holds offers from 10 “Power Five” conference schools, including Maryland, Nebraska, Southern California, Virginia and Virginia Tech.

But Barnwell said he feels secure with Penn State.

“Just everything about Penn State stood out to me from the fans, to the players, to the coaches, to academics,” Barnwell said. “I don’t see any flaws in the program. I just found a home early.”