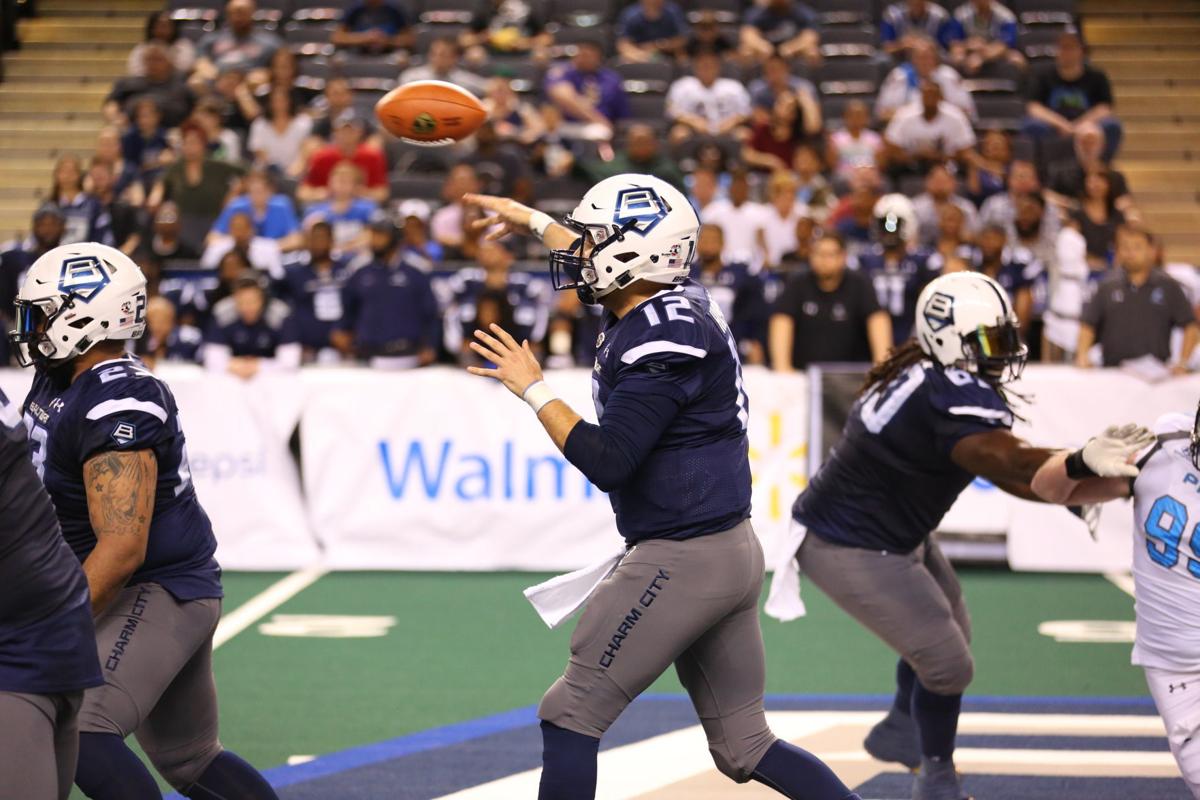 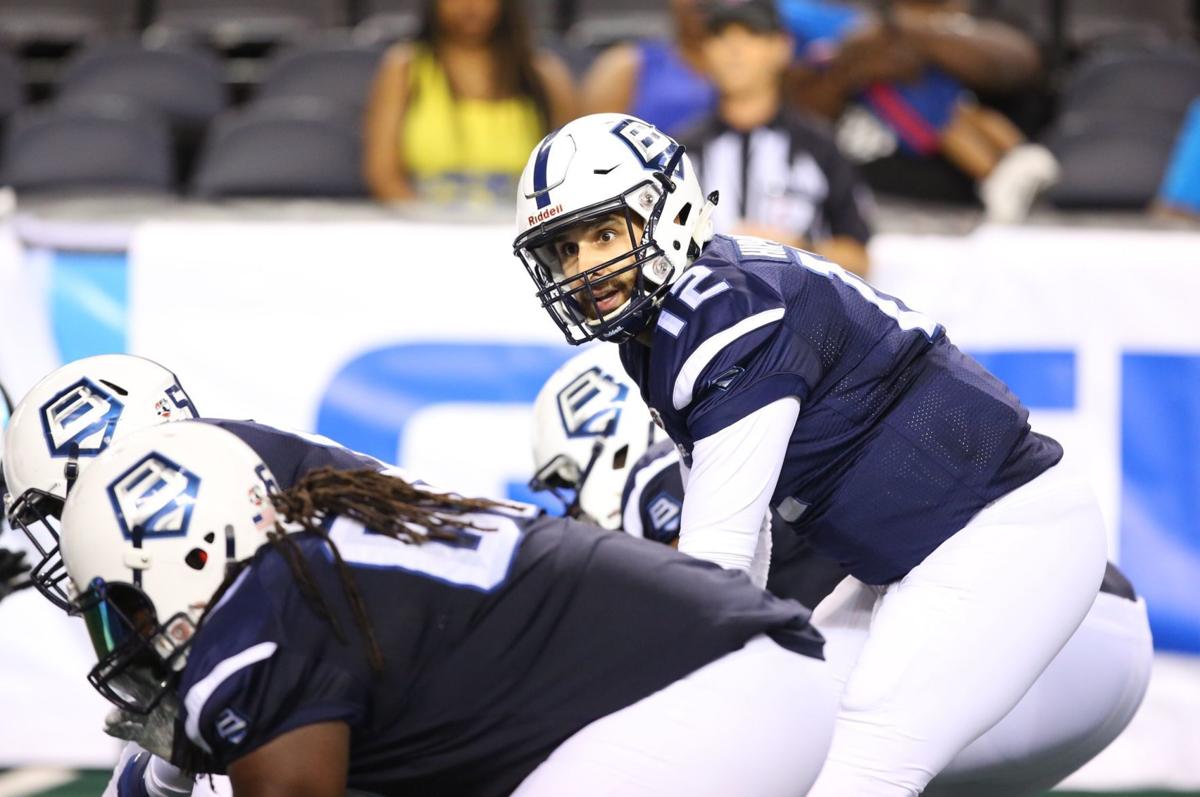 Colonial Forge graduate Randy Hippeard (12) will be playing in his second straight Arena Bowl tonight against the Washington Valor. He lost in last year’s final while playing for Tampa Bay. 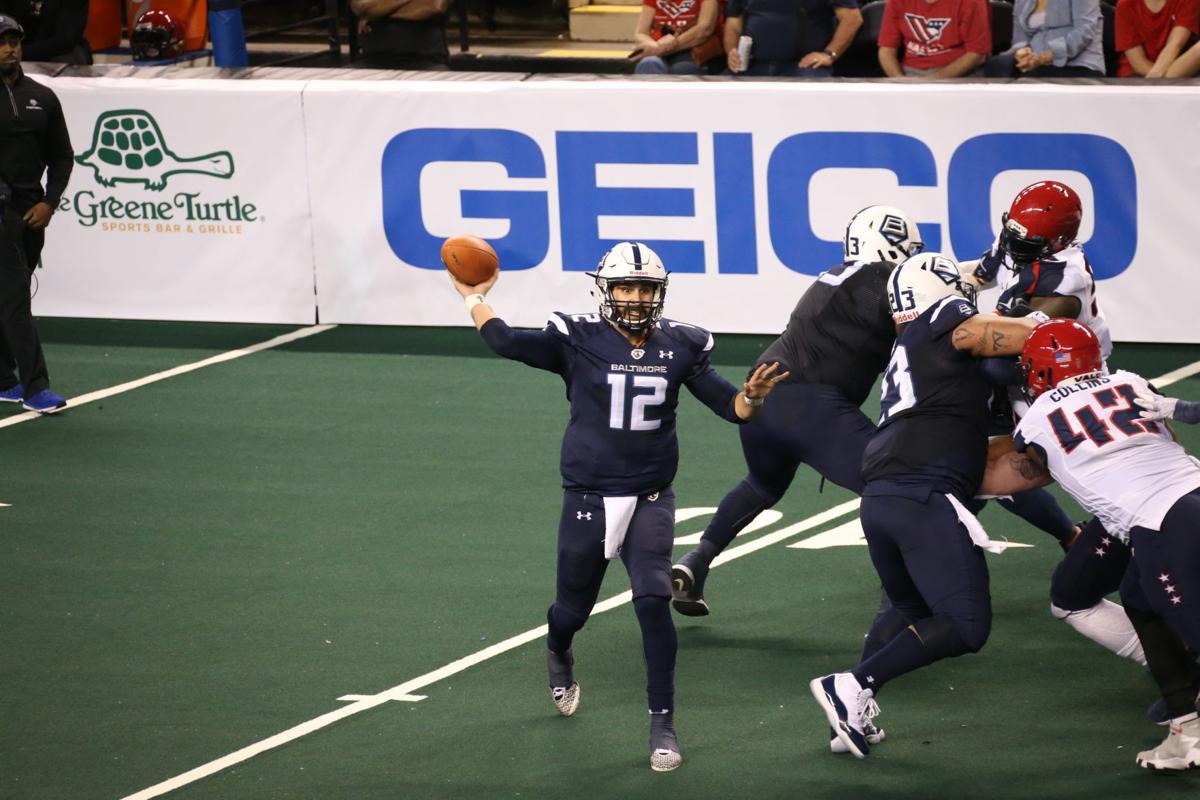 Including playoff games, Randy Hippeard (12) has thrown 74 touchdown passes and only five interceptions for the Baltimore Brigade this season.

Colonial Forge graduate Randy Hippeard (12) will be playing in his second straight Arena Bowl tonight against the Washington Valor. He lost in last year’s final while playing for Tampa Bay.

Including playoff games, Randy Hippeard (12) has thrown 74 touchdown passes and only five interceptions for the Baltimore Brigade this season.

Tight Windows may as well be Randy Hippeard’s nickname, so well does that phrase define his football career. At every stop, he’s enjoyed little margin for error.

Despite leading Colonial Forge to the Northwest Region final as a senior in 2003, Hippeard had few college options. He settled on Division II Virginia-Wise and rewrote the Cavaliers’ passing record book, but got no attention from American pro scouts.

So his nomadic career led him to a pro league in Switzerland, then a series of stateside indoor minor leagues, before he landed in the Arena League, where precision is a must for a quarterback.

“The field is 50 by 28 1/2 yards,” said Omarr Smith, Hippeard’s coach with the Baltimore Brigade. “With three receivers and three defensive back, the windows are small. If you wait for the receiver to get open before you throw the ball, you’re too late.”

Now comes his next small window: a chance at an elusive championship.

The Brigade host the Washington Valor Saturday night in Arena Bowl XXXI, giving Hippeard a second shot at winning his first ring at any level. Last year, his Tampa Bay Storm squandered a 20–7 lead and lost to the Philadelphia Soul 44–40 in a game that saw Hippeard throw two interceptions and get sacked for a safety.

How important is this chance to Hippeard? Even though he’s finally playing close enough to home that his friends and family can easily drive to see him play, he insisted on not being bothered this week. Though he’s still at the top of his game at age 32, Hippeard realizes his window to become a champion may slam shut sooner than he’d prefer.

A win “would be big, especially since I had an opportunity last year, and I didn’t exactly get the job done. To get an opportunity to be back in the Arena Bowl doesn’t come around often,” he said this week. “... I told [friends and relatives] to stay home. Being in this game last year, there are a lot of distractions. I wanted to stay really focused. I didn’t want the distractions.”

Very little seemed to bother Hippeard this season. He passed for 2,901 yards and 61 touchdowns (with only five interceptions) during the regular season, then tossed 13 more TD passes without a pick as the Brigade twice beat the Soul in a soccer-style two-game aggregate semifinal series. In six Arena League seasons, he has thrown 384 TD passes and 54 interceptions.

“He’s everything you want in a quarterback,” Smith said. “He works his tail off, and he plays with a huge chip on his shoulder. He’s had a lot of success in the Arena League, but he doesn’t let it go to his head. He’s a hard-nosed grinder.”

And, Hippeard feared, something of a jinx. The Arena League doesn’t have the NFL’s resources, and the last two teams he quarterbacked—Orlando (2016) and Tampa Bay (2017)—went bankrupt after the season he wore their uniforms.

“Two years ago, I played in Orlando, and they folded. Then last year, I played in Tampa, and they folded,” Hippeard said. “I started wondering about the next team I would play for. You really do start thinking, ‘How stable is this league?’ especially when teams as historic as Orlando and Tampa can’t make it.”

Smith, who’s appearing in his 10th Arena Bowl as a player or coach, paid close attention to the Storm’s financial issues.

“He was our No. 1 guy even before Tampa Bay ceased operations,” Smith said. “We wanted to make sure he came to Baltimore.”

Hippeard hopes to write a happy ending to that story on Saturday night by beating the Valor (which counts former Brooke Point and Virginia Tech star J.R. Collins on its roster). Both Hippeard and Smith believe that the Arena League is on firmer financial ground now that teams are controlled by Wizards and Capitals owner Leonsis (Brigade, Valor) and Ron Jaworski (Soul), and that expansion is coming.

But as NFL training camps begin, Hippeard would be available Sunday morning if any team wants an experienced, accurate backup. There are other options: the Alliance of American Football, scheduled to debut next spring, and the return of the XFL in 2020.

As usual, though, Hippeard’s phone hasn’t rung. The only former Arena League quarterback to make it big in the NFL was Kurt Warner two decades ago, and Smith admits that there may be a stigma attached to indoor passers. And at 32, Hippeard’s small window for advancement may be almost shut (if it isn’t already).

“As far as I’m concerned, it’s still open,” he said. “But I’ve never had a look from outside Arena Football. For me, the door is still open. If the opportunity presents itself and it’s the best opportunity for me and my family, I’ll consider it.”