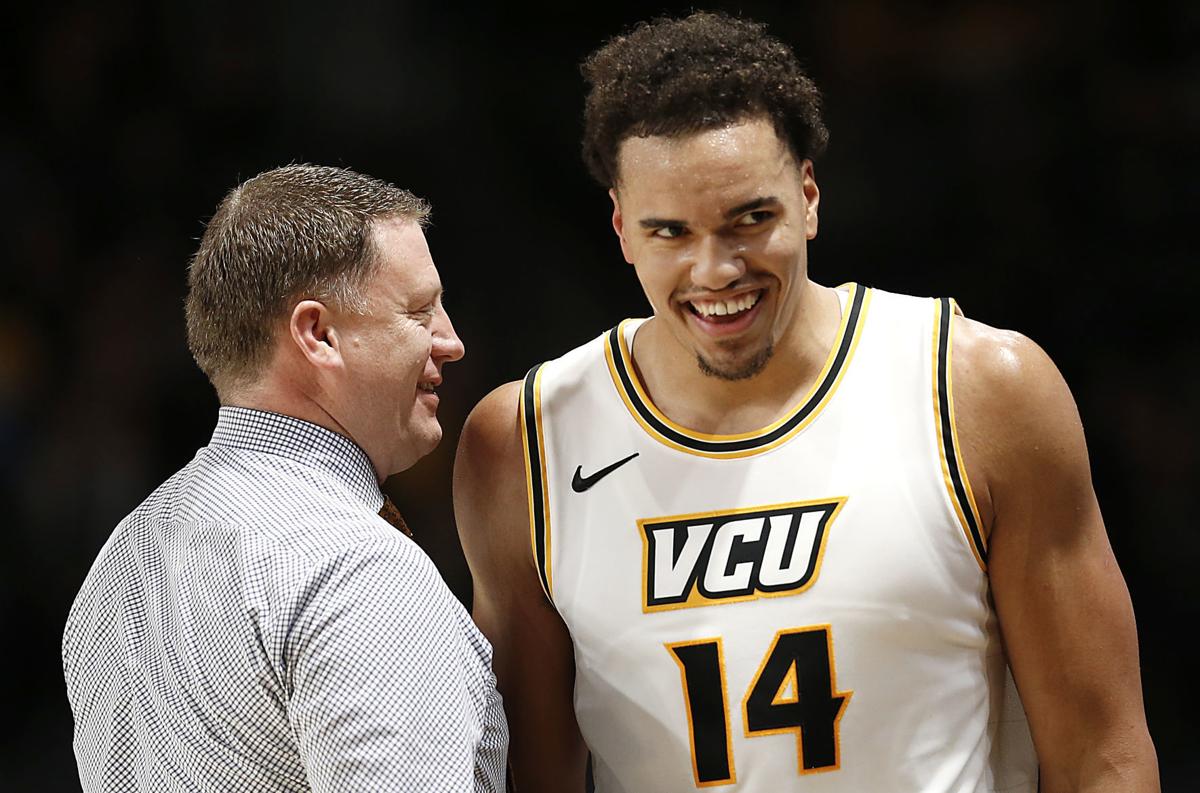 VCU coach Mike Rhoades (left) is liking more and more with with he's getting from improving forward Marcus Santos-Silva (14).

VCU coach Mike Rhoades (left) is liking more and more with with he's getting from improving forward Marcus Santos-Silva (14).

Two and a half years later, he’s not quite as large, but Santos–Silva’s impact on VCU’s fortunes has grown exponentially.

It was on full display during Sunday’s 72–59 victory over George Mason in a game that wasn’t nearly that close. Santos–Silva tied his career high with 26 points and added 12 rebounds against the overmatched Patriots.

“From my perspective, he’s an old-school-lunch-pail kind of player,” George Mason coach Dave Paulsen said. “He doesn’t try to do anything he can’t do. He just does what he can do, and he does it exceptionally well.”

For most of their current run of success, the Rams have leaned heavily on perimeter players like Eric Maynor, Troy Daniels and Treveon Graham. Santos–Silva gives them a potentially dominant inside presence for a change—and he doesn’t seem to have reached his full potential yet.

“He’s so physical, he throws his body around, and he’s fast for his size,” VCU coach Mike Rhoades said. “… Honestly, in my 23 years, I’ve never watched a guy work so hard on his body and his game. He’s locked into trying to become the best player he can be.”

He was unquestionably the best player on the court at Eagle Bank Arena as the Rams (12–3, 2–0 Atlantic 10 Conference) made quick work of the Patriots

Santos–Silva drew two early fouls on George Mason junior A.J. Wilson, who entered the game ranked third in the nation in blocked shots at 3.77 per game. With Wilson sidelined, Santos–Silva essentially had his way inside against 6–9 freshman Josh Oduro, scoring 16 points in the second half.

“Every time we had a chance to get back in the game … it seemed like he got an offensive rebound or a putback or a foul,” Paulsen said. “He’s a guy who understands who he is, and he’s unbelievable at what he does.”

It wasn’t always that way. When Santos–Silva arrived at VCU (which he chose despite interest from Kansas State, Boston College and Temple, among others), he was in no shape to dominate. He averaged just 10 minutes, 3.1 point and 3.0 rebounds as a freshman.

Obsessed with better nutrition and fitness, he has shed nearly 30 pounds (to his current 247) and is stronger and quicker.

“Every single day, I was working on my nutrition, hitting the weight room and getting in better condition,” he said.

That became evident in his sophomore season, when he improved his averages to 10 points and 7.4 boards per game—capped by a 26-point, 22-rebound effort in a quarterfinal victory over Rhode Island in the A–10 tournament. It was VCU’s first 20–20 game since Kendrick Warren in 1991.

The progression has continued this season, as his 13.3 points and 8.7 rebounds lead the Rams. On Sunday, he was whistled for just one foul while drawing six on the Patriots’ overmatched

And after entering the game as a 53-percent foul shooter, he was a perfect 6 for 6 from the line.

“I applaud that improvement,” Paulsen quipped, “but I wish he’d waited one more game to make it.”

Rhoades expects to see even more advancement from his centerpiece, who left the game to chants of his surname from a substantial group of VCU fans who made the trek north.

“If you spent the day with us, you’d see how hard he works,” Rhoades said. “Even when I tell him to get off his feet, he doesn’t listen. He’s a workaholic. We’re very lucky to have him at VCU.”