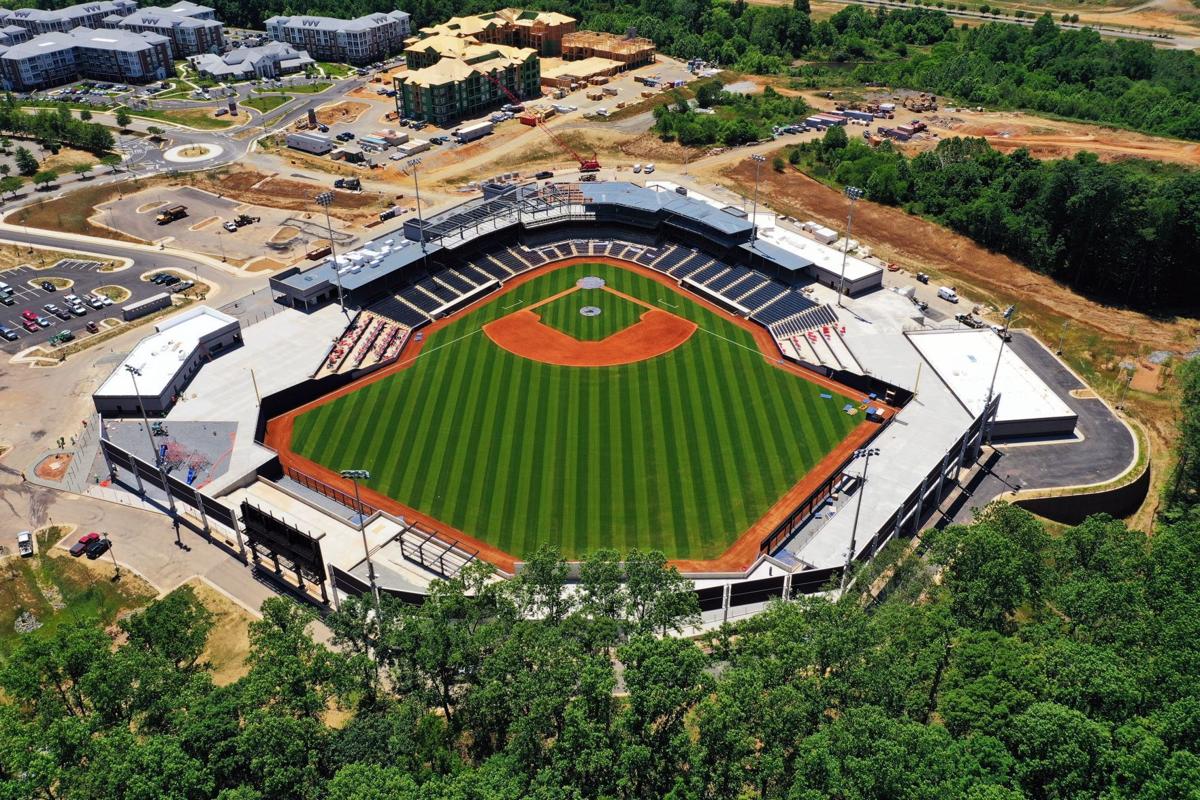 A June 12 photo shows a Fredericksburg Nationals stadium ready for play, but the season may be lost to the coronavirus. 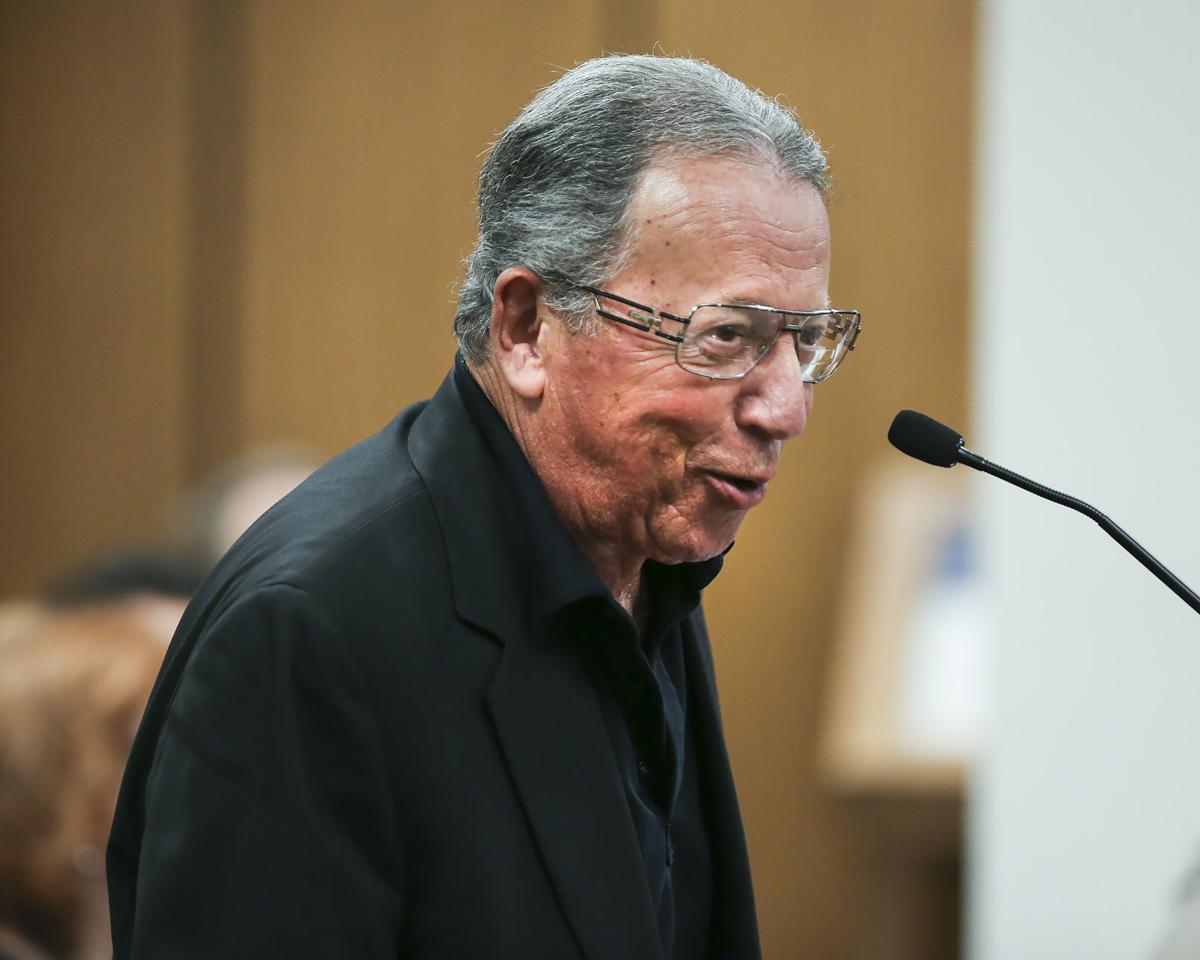 Art Silber talks to the Fredericksburg City Council in 2018 about his plan to move his team from Woodbridge to the city. 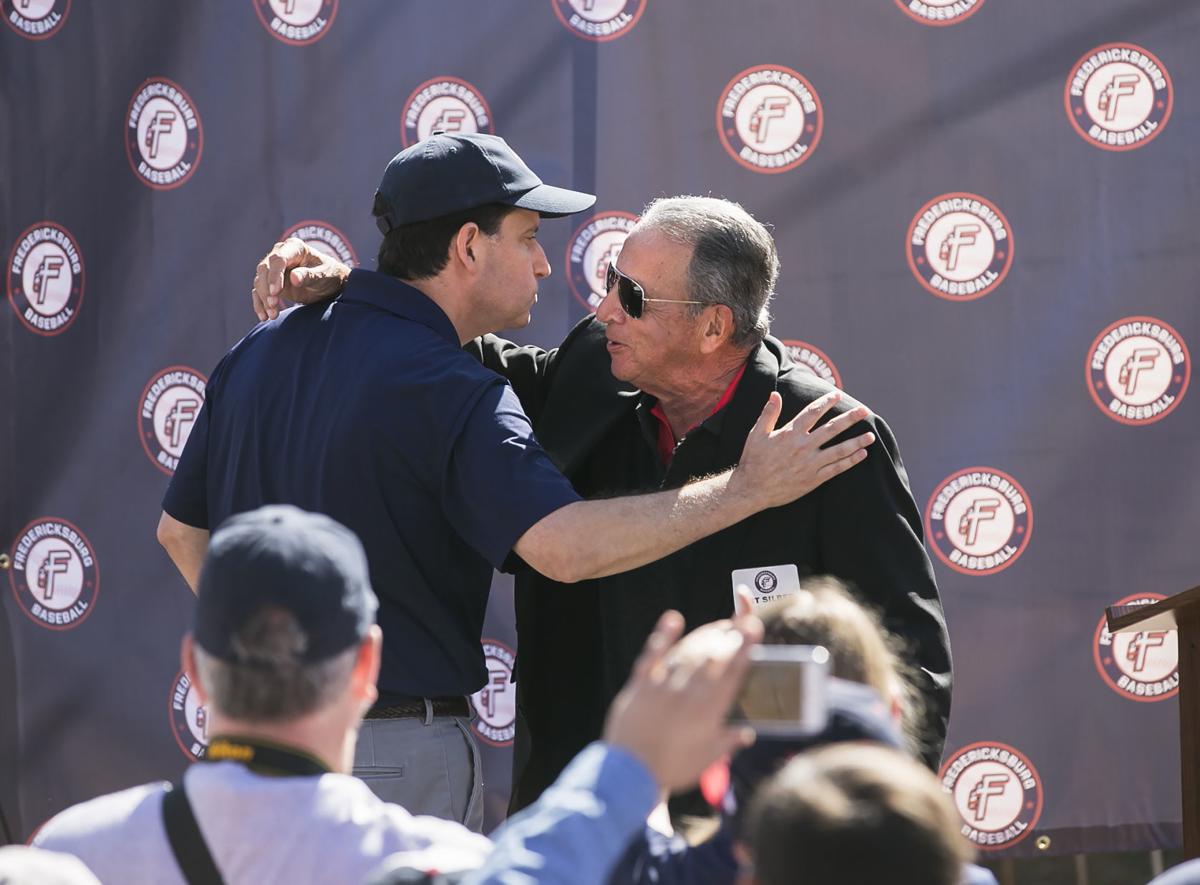 Fredericksburg Nationals owners Seth Silber (left) and his dad Art Silber embrace at the unveiling of the baseball team’s new name and logos downtown last fall. An open house is set this weekend. 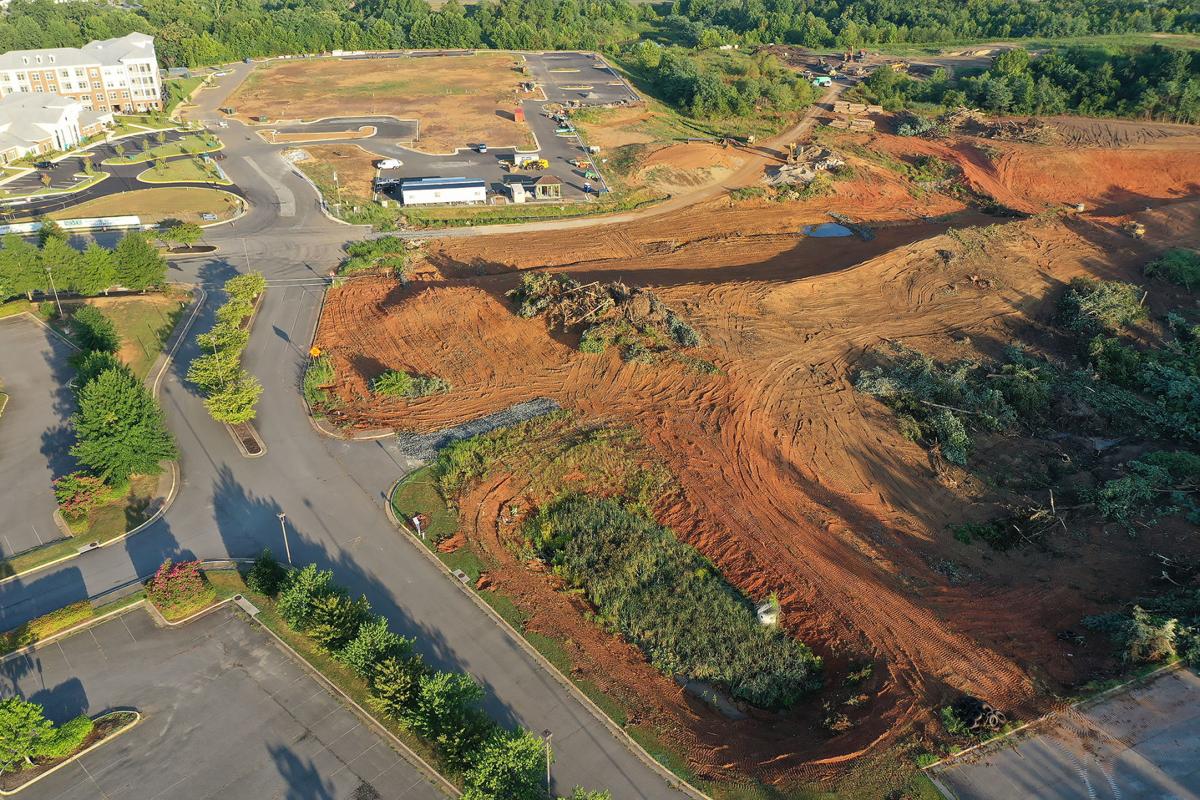 Construction of the baseball stadium in Celebrate Virginia South began in August 2019.

A June 12 photo shows a Fredericksburg Nationals stadium ready for play, but the season may be lost to the coronavirus.

Art Silber talks to the Fredericksburg City Council in 2018 about his plan to move his team from Woodbridge to the city.

Fredericksburg Nationals owners Seth Silber (left) and his dad Art Silber embrace at the unveiling of the baseball team’s new name and logos downtown last fall. An open house is set this weekend.

Construction of the baseball stadium in Celebrate Virginia South began in August 2019.

What if you build it and they can’t come?

On Monday afternoon, yellow-vested construction workers busied themselves preparing the Fredericksburg Nationals’ sparkling new ballpark in the Celebrate Virginia South section of the city. One pulled cable for the state-of-the-art replay board in center field. Others tended to the home team’s clubhouse, which still lacks lockers, or worked on future concession stands.

The only problem? It’s unlikely anyone will watch a professional game there this year, due to the coronavirus pandemic.

“It’s obviously a disappointment not to have baseball here right now, but this place is just a dream come true,” said Seth Silber, the owner’s son and team treasurer. “It’s hard to believe this is something we’ve built, and Fredericksburg is such the right place for it. The support here has been so amazing. There’s been so much support for us in these difficult times.

“We will have great times here in the community. … Baseball will come, once we get past some of the more important health issues.”

Father’s Day weekend traditionally marks the midpoint of the Carolina League season. But nearly two months after the Class-A minor league affiliate of the World Series champion Washington Nationals planned to make its début in Fredericksburg, baseball remains in limbo.

While major league owners and players haggle over prorated salaries in an abbreviated season, minor league teams, officials—and especially baseball-starved Fredericksburg-area fans who have never had a pro team to call their own—are resigned to a lost year.

No official cancellation announcement has come. But when asked if he can see any way to play in 2020, Fredericksburg manager Tripp Keister sighed.

“It just doesn’t look like it,” he said, “trying to get 35 guys on a bus and in a small locker room. I just don’t see how you can make that work.”

Dave Stinson, a supporter of the team for nearly four decades, was even more succinct.

“It’s a gimme that there’s not going to be a minor league baseball season, period,” he said.

Absolutely no one views the coronavirus positively. But when sports across the world paused in early March, it actually bought the FredNats (as they’re called) some time.

After the team spent 36 years in Woodbridge, the Silber family announced plans to move it to Fredericksburg in June 2018. Silber had failed in several attempts to secure funding for a new ballpark in Prince William County, the team’s home since 1984, to replace outdated Pfitzner Stadium.

But while waiting to finalize financing and permits, the Silbers didn’t break ground until August 2019. Even with favorable winter weather and a break from the league office allowing his team to spend the first two weeks of the season on the road, it was always doubtful that the FredNats’ new stadium would be completely ready for the scheduled April 23 home opener.

Seth Silber said the artificial turf field—a rarity in minor league baseball—and the main seating bowl would have been ready for opening night, but that the restrooms and concession stands would have been portable.

The urgency to complete the amenities has faded, although the team wants the park to be as presentable as possible for an open house Saturday and Sunday, when groups of 10 fans will get guided tours from 11 a.m. through 5 p.m. each day. The team also stays engaged with its new fans on social media and held an online “virtual home opener” on April 23.

Even if there are no pro games this summer, Seth Silber said the team plans to host youth leagues, movie nights, small concerts and religious gatherings at the park this fall—subject to local health regulations. That could help defray major financial losses as the team faces a year without revenue and an estimated $35 million price tag for its new home.

Fredericksburg officials signed a 30-year lease with the team at an annual rent of $1.05 million. But the first installment isn’t due until the quarter after the facility in Celebrate Virginia South receives its “commencement date”—defined in the agreement as the time when it has both received its temporary certificate of occupancy and is “actually available for city events.” That may not come until 2021.

“Financially, it’s tough,” Seth Silber said. “Obviously, the revenues we were expecting to come in aren’t coming in, and we will experience some pretty significant losses.

“It won’t impact our viability going forward. We have the resources to survive this. And at the same time, we’ve been amazed at the support from the business community and individual fans.”

Silber said the team has sold roughly 1,200 full-season ticket equivalents, most of them full-season plans. Fans also could sign up for half-season and 15-game plans for one, two or three years. Also, Silber said all 20 advertising signs along the outfield fences have been sold.

That revenue, along with merchandise sales and what he called a “small” federal Payroll Protection Program loan, has helped sustain operations in a lost season, although Silber said the team laid off roughly one-quarter of its staff at the start of the pandemic.

“Art [Silber] and his family worked for so many years to bring this stadium to fruition, and everything fell into place perfectly—except the unpredictable,” said Stinson, who advertised his insurance agency in Haymarket at Pfitzner Stadium. “They have a beautiful stadium, almost ready to be played in, and there’s no baseball.”

Stinson said he has attended games since the team was based in Alexandria. It moved to Woodbridge in 1984, and Silber bought the team in 1990. Stinson is friendly with the Silber family, but he has concerns.

“I question the finances,” Stinson said. “At some point, Art is depending on revenue from season tickets. I don’t know that, if everybody asked for their money back, if they’d have enough to pay them back.”

Seth Silber said that because the season hasn’t been officially canceled, the team hasn’t formulated a refund policy. But he expects most fans will roll over their investments to next year.

“I think most people are excited to be season ticket holders and want to maintain their seats,” he said. “We have a very strong season ticket base. … It helps us understand what our revenues will look like in future years.”

This was to be the FredNats’ honeymoon season, with packed stands on most nights and entertainment on the field and in the concourses. As lame ducks in 2019, the then-Potomac Nationals averaged an announced crowd of 3,262 fans per home game. The Silbers expected that total to represent an off night in their new park.

“There was a lot of energy, a lot of excitement, a lot of enthusiasm with us getting ready to come to Fredericksburg and with the new ballpark,” said Keister, who has managed the team since 2014. “When I spoke at the hot stove banquet, everybody was really excited. … Then the pandemic hit, and everything stopped. It’s just sad. It’s really been a tough time.

“It’s unprecedented, at least since the world wars, for players not to play a season. It’s a void. … I miss it. It needs to happen.”

While he understands the fans’ frustration, Keister’s focus is on his players, whose athletic clocks are ticking in their quest to make it to the major leagues.

“They’re missing a whole year of development, and that’s a big deal,” Keister said. “As a baseball player, you only have a set amount of time you can play. You have ‘X’ amount of time to make it to the big leagues. It’s always a race. Our job is to get these guys better, and they’re losing a whole year in the prime of their athletic careers.”

Keister speaks with several of his players by phone every day, and he has found a way to scratch his competitive itch.

His son Kevin recently graduated from high school in Wilmington, Del., and has signed to play baseball at the University of Maryland. Kevin, like so many other teenagers, missed out on his senior season. So Tripp Keister organized a summer league in Delaware with divisions for high school and college teams, and when the state lifted restrictions, games began this week.

Next spring, Tripp Keister plans to be back in a professional dugout, probably in Fredericksburg. The coming-out party will be a year later than expected.

Will that delay put a damper on the enthusiasm that was building before the shutdown? Stinson thinks so.

“They’re never going to get back the excitement there would have been this year,” he said. “It’s not going to be like that next year. Art just can’t recreate that excitement.”

“I actually think it’s going to be more,” he said. “The community is following the progress of the ballpark, and there’s lots of excitement. I know there is from our end.”