The cast of UMW Theatre's production of Shakespeare's 'Much Ado About Nothing.' The students will perform an abridged virtual version April 16, from 7-8 p.m. 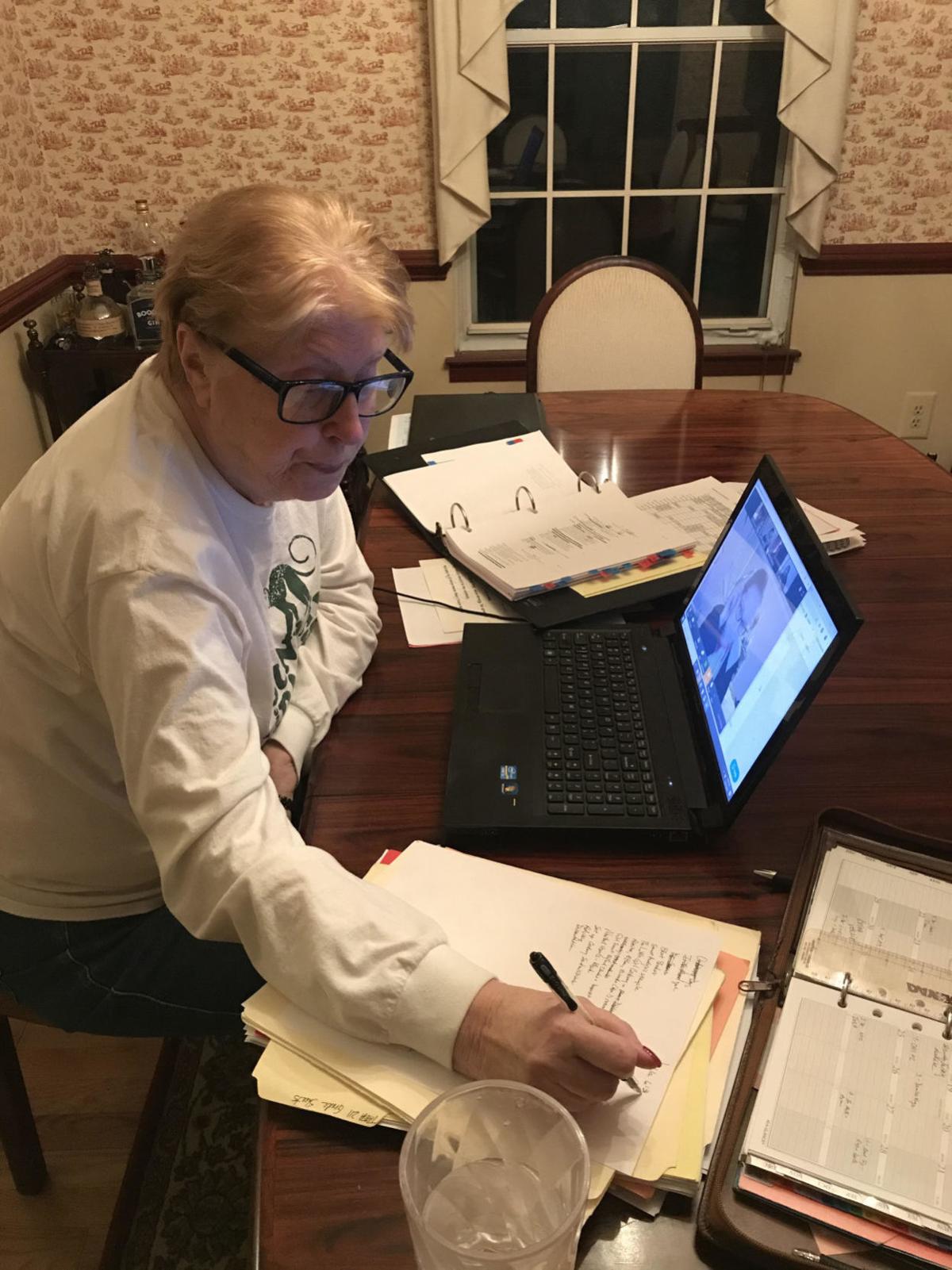 Helen Housley directs 'Much Ado About Nothing' from her dining room in Reston. This will be her final show at UMW as she anticipates retirement at the end of this year. 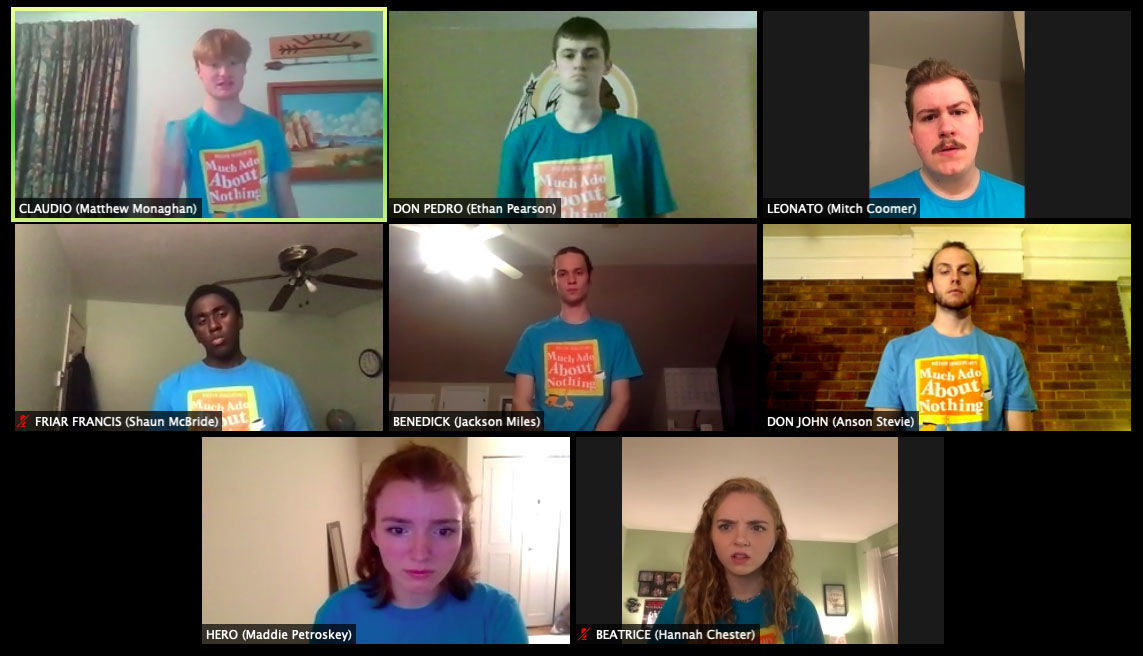 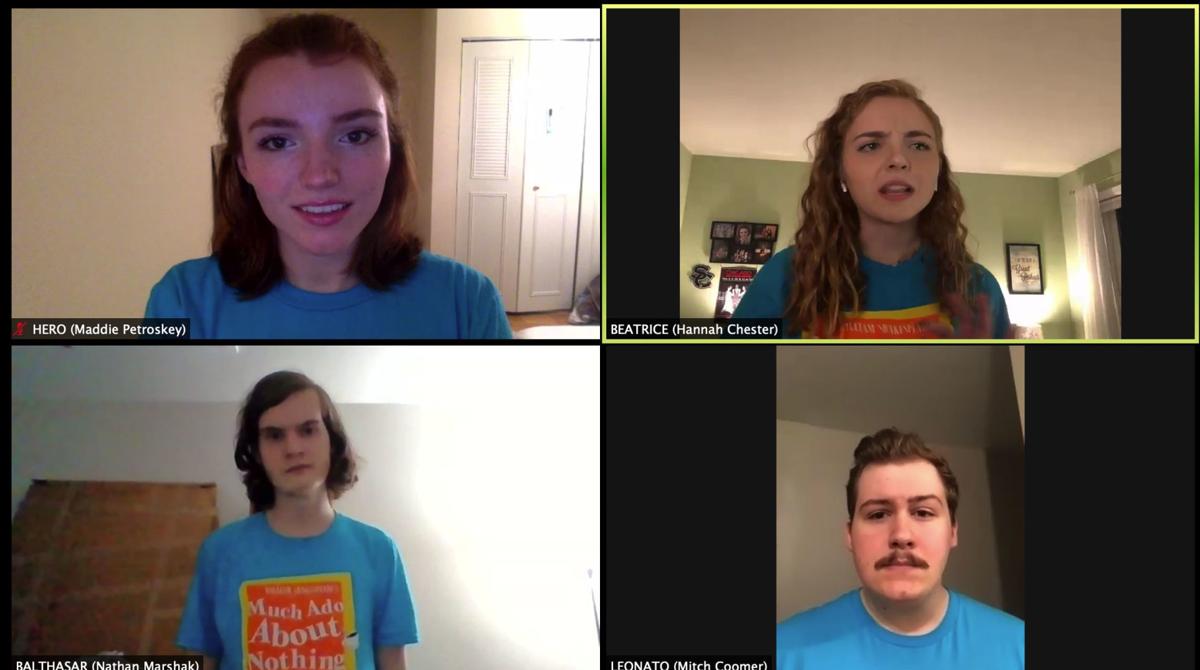 The cast of UMW Theatre's production of Shakespeare's 'Much Ado About Nothing.' The students will perform an abridged virtual version April 16, from 7-8 p.m.

Helen Housley directs 'Much Ado About Nothing' from her dining room in Reston. This will be her final show at UMW as she anticipates retirement at the end of this year.

When the lights come up on the University of Mary Washington’s spring production of “Much Ado About Nothing,” they’ll be in your own home.

When in-person classes were suspended on March 12, the theater department had to take a step back from weeks of work on Shakespeare’s classic comedy “Much Ado About Nothing.” Then they flipped the script. UMW’s students will perform the play online on April 16 from 7 to 8 p.m. The play will be performed over Zoom and will be simulcast over YouTube Live. It will also be available to view on YouTube as a recording later. And it’s all free for audiences.

Eighteen actors scattered around the state, and one in South Carolina, will perform the play from their own bedrooms, dining rooms, garages or any other space in their homes with the right acoustics. Hannah Chester, a freshman theater and communications double major, is one of these far-flung actors. She will be playing Beatrice from her room in Lorton.

It’s a dream role for her. She first became acquainted with the play in high school and said when she read for Beatrice, she was struck by how powerful she was. Chester and her castmates were in the midst of rehearsal when the school moved to distance learning due to the threat of COVID-19.

“We were so used to practicing four to five hours per day together every day,” she said. “This has been a whole other layer of acting.”

The play focuses on two couples, Benedick and Beatrice and Claudio and Hero, and explores their love stories, beset by misunderstandings. It also displays uncanny female characters, other characters who offer moments of unfettered lightness, and all personalities in between. Chester said that’s why she loves this play: There’s a character for everyone to identify with.

Gregg Stull, chair of the Department of Theatre and Dance, said there are so many reasons to persevere with the performance.

“It’s one of Shakespeare’s most beloved comedies,” he said. “In an uncertain world, it offers an opportunity to lose ourselves in comedy. This performance, too, is an act of community, a moment to come together as actors and audience and celebrate.”

“Much Ado About Nothing” is also the final production Helen Housley will direct as she anticipates retirement at the end of this year after two decades of teaching, directing and serving as the vocal coach for dozens of productions at UMW.

Housley said the actors have risen to the challenge of performing online. She said the first week—starting March 23—rehearsing online was rocky. Students didn't know how to act for the camera.

“But after that first week, they adapted fairly quickly,” she said. “They learned how to act for the camera, bringing emotional honesty to their performances even when they weren't getting feedback from their acting partners. This is pretty phenomenal because acting is about giving to your partner and reacting to what the partner is doing [or] saying. When there is no visible partner next to you, the actor has to create within themselves that emotion and give it to the camera. I'm pretty impressed by how our students have been able to do that.”

This, she said, is a valuable skill, especially for those who want to go on and act for film or TV.

For Stull, keeping the show going was of particular importance. Some students depended on it for their senior theater project. But as the week wore on with everyone off campus, he said reports of isolation from students began to pour in. They rehearse every evening and it’s different that it is when t whole cast and crew is together, but he said it has really eased their sense of isolation.

“It’s a new feeling,” Stull said. “But by doing what is familiar for us, rehearsing a play, gives us a great deal of comfort.”

The sets are still in a darkened Klein Theatre at UMW, as are the costumes. Chester and the rest of the cast instead sent photos of their own wardrobes to costume designer Kevin McCluskey, who chose what they’d wear on-screen.

Housley said that’s not the only challenge of performing live and online.

“Once we begin the livestream on Thursday, it's all up to the actors,” she said. “There are no sound or lighting cues or scene changes, the things you'd normally expect from a theater performance. It will only be the actors, their voices, facial expressions and minimal gestures. They are all welded to one spot because their cameras are stationary, so they must be so as well. That's another adjustment for our students—they can't move while speaking.

There are already more than 1,000 people registered to watch the performance live on Zoom on Thursday. If it were to debut in Klein Theatre on Thursday, there are only 233 seats available. Stull said that’s a testament to the power of performing arts.

“Even in this time when we find ourselves apart from one another, we continue to believe in the power of theater to nurture and inspire ourselves and our community,” he said.

Housley, too, said, “Theater can happen in many ways— even on a computer screen. It isn't quite the same experience as live theater is, but our performance is happening in the here and now, with all the unknown possibilities staring us in the face as the curtain goes up.”

Chester said she’s lucky to have the direction of Housley and wishes the cast could hug her after the performance. But this play, Housley’s favorite Shakespeare comedy, was also a tremendous stroke of luck to have been planned for this time, she said. It’s a “ray of sunshine.”

UMW Theatre: "Much Ado About Nothing," April 16, from 7-8 p.m. Free. Find out more and find the link to the performance here: https://www.fredtix.com