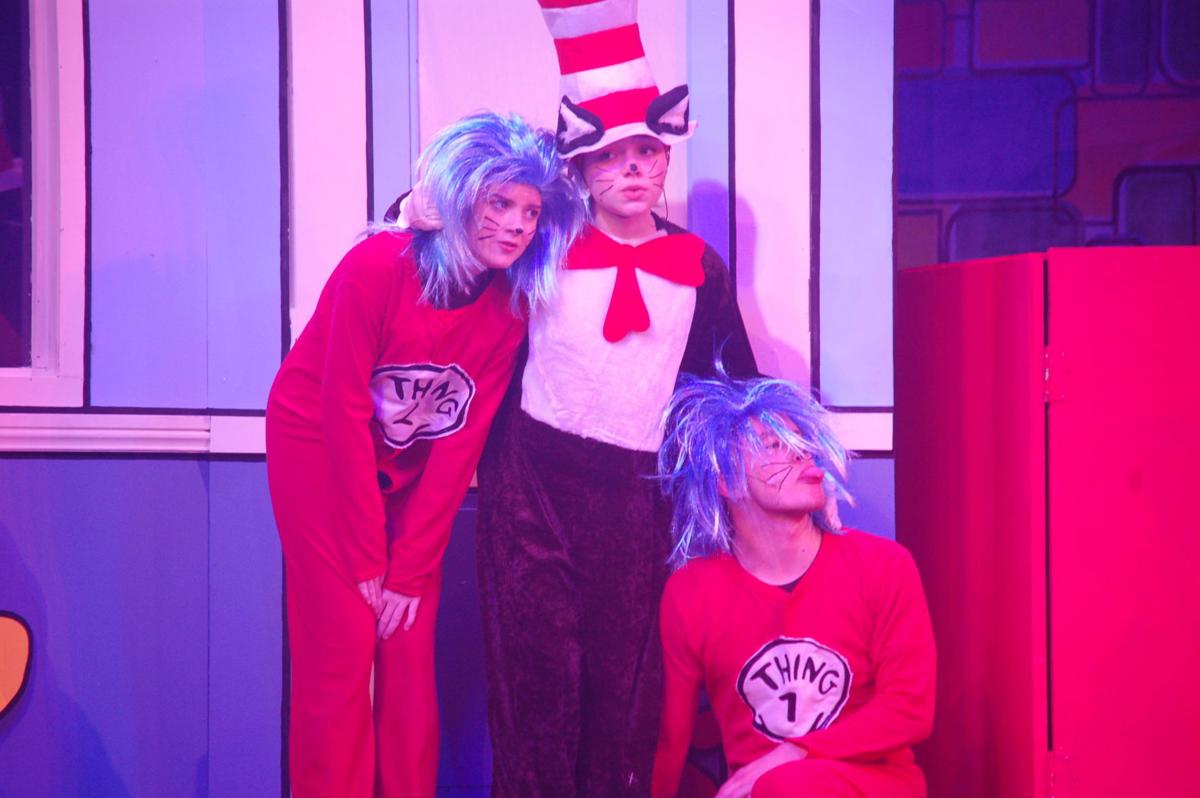 The Cat (Abigail Mullen), Thing 1 (swing Sam Cook) and Thing 2 (Casey Henley) prepare to stir up trouble in ‘The Cat in the Hat,’ onstage at Riverside Children’s Theatre. 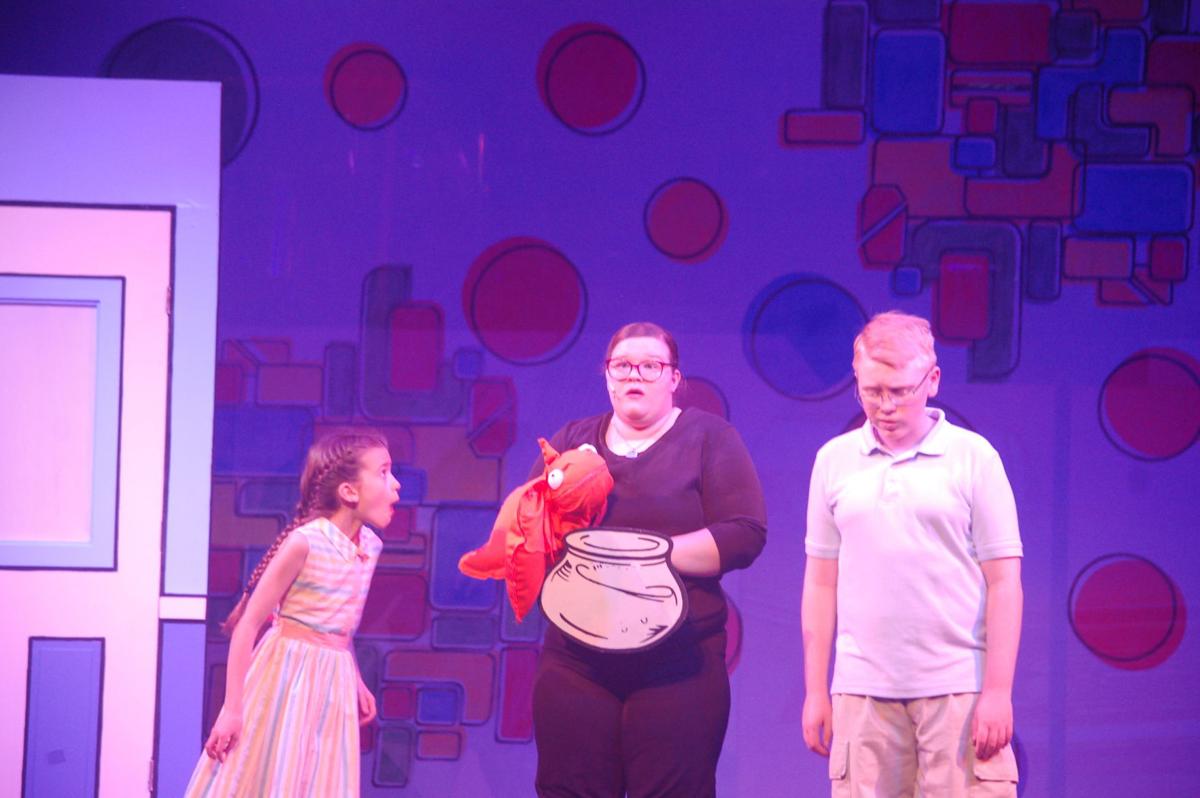 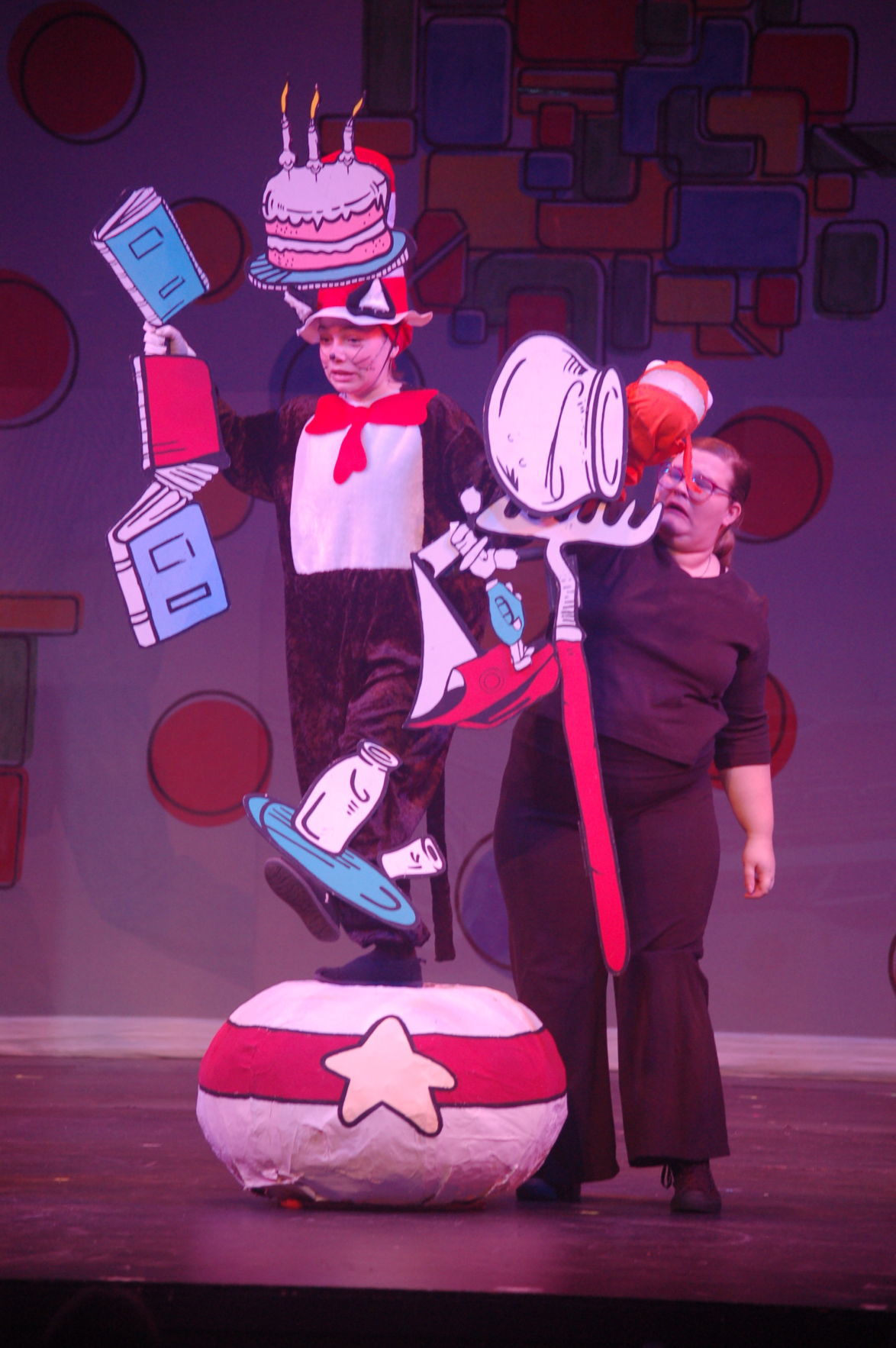 The Cat (Abigail Mullen) tries to show off her balancing skills to the Fish (Ally Van Luven) in Dr. Seuss’ ‘The Cat in the Hat,’ playing at Riverside through March 14.

The Cat (Abigail Mullen), Thing 1 (swing Sam Cook) and Thing 2 (Casey Henley) prepare to stir up trouble in ‘The Cat in the Hat,’ onstage at Riverside Children’s Theatre.

The Cat (Abigail Mullen) tries to show off her balancing skills to the Fish (Ally Van Luven) in Dr. Seuss’ ‘The Cat in the Hat,’ playing at Riverside through March 14.

The wild, wacky and wonderful world created by Dr. Seuss comes to life in the current feature of Riverside Children’s Theatre. “The Cat in the Hat” is chock-full of audience engagement and physical humor that has elicited gales of laughter and cheers from young theater-goers. But it also presented some unique challenges to director Jessica Lane and her cast of six actors. The first of which was the discovery that the first read-through of the script took less than 20 minutes.

“You don’t want to have busloads of kids coming for a field trip and see only a 15-minute show! You want it to be more of an experience,” said Lane, who teamed up with production manager Jennifer Taglieri to develop ideas that could expand on the experience while remaining true to the script.

One addition is a session of interactive games with the audience led by two winsome and expressive Kittens—Mara Koenig and Casey Henley, who later reappear as Thing 1 and Thing 2. Parents and grandparents who remember the Hokey Pokey, Simon Says (Kitten Says) and Guess the Activity from their own childhood may not be able to resist the urge to join the fun. The games’ inclusion not only generates energy and enthusiasm from the audience but also helps them to develop a relationship with the actors and their ready engagement as the story unfolds.

As the play begins, Sally (Fiona Scripps) and her brother (Sam Wettergreen) are alone in their home on a very wet and dismal day with no chance of outside play. They make no secret that they find the situation boring and collapse in lethargy onstage. Yet when it seems that they are about to experience the most unexciting, longest day of their lives, a bump at the door signals the arrival of the Cat in the Hat (Abigail Mullen) and the bundle of fun (and pandemonium) he is about to unleash.

To the children’s bemusement, Cat and the Kittens show how fun can be created out of thin air, as they play a game of catch with an imaginary ball of larger and larger size and engage in wheel-barrow races. Then, Cat unveils his pièce de résistance, showcasing what he considers to be his magnificent balancing ability. Mounted on a free-rolling ball, he adds more and more (rhyming) objects to the tower of items he balances on his hands, hat and foot. While the Cat continues in his prideful display, the siblings’ fascination turns into worry heightened by the admonitions of their pet Fish (Ally Van Luven), who much to its dismay finds itself teetering on one tall, swaying stack. In short time, Cat’s seemingly impossible feat does, in fact, prove to be impossible, and his bumbershoot, rake, cake, cup and milk on a dish, and even the Fish tumble to the floor.

Cat distracts the children from the terror they feel at the thought of Mother’s return to the house in a total state of disarray and presents a giant red wooden box with a hook, which contains “a couple of things.” The audience can confirm the truth of his claim as he unlatches the box to reveal two wild and rambunctious blue-haired Things that add to the calamity as they engage in outdoor games such as kite-flying in the house. In the midst of the catastrophe, the children know the Fish is right when it exclaims “No! No! Those things should not be in this house! Make them go!” With that, they engage in a mad dash to capture the rascals in a chase that goes beyond the boundaries of the stage and into the audience—generating an abundance of excitement, laughter and cheers. When they are finally captured and dragged back to their box, one Thing’s tantrum adds to the audience’s elation.

Disappointed that all his tricks and the Things’ shenanigans were not appreciated or welcomed, Cat leaves the scene—only to immediately return with the Things to engage in a fast-action cleanup campaign. Their mission complete, they leave the tidy house in the nick of time, as Mother returns and asks her children what they did all day. Her question is open-ended and, as the performance draws to a close, the audience is encouraged to think of how they would answer if they were in the children’s shoes.

Lane credits her cast of seven, including swing Sam Cook, for their improvisations that bring their characters and the improbable tale of the fascinating feline to life.

“I was looking for actors who could think outside the box—no pun intended!” she said. “The cast was fun and flexible and could take a note of direction and portray it in their own, imaginative way.”

She describes the value of a live performance in a day where most children rely on the technology of screens and smartphones for entertainment.

“Live theater is special because it is so tangible,” she said. “You are right there in the room with the performers right in front of you and you are interacting with them. That’s ‘lightning in a bottle.’ The air is charged with energy and you will never experience that exact same circumstance again.”

Lane also recognizes the bonding experience for families of experiencing a live performance together—particularly one that portrays a story of Dr. Seuss, who wrote and illustrated more than 60 books that have delighted generations of children for more than six decades.

“Dr. Seuss is just so whimsical and so much fun!” Lane said. “ ‘The Cat in the Hat’ is a timeless classic. Parents and grandparents remember reading it in their childhood and are so happy to have the opportunity to pass it on to their children and grandchildren.”