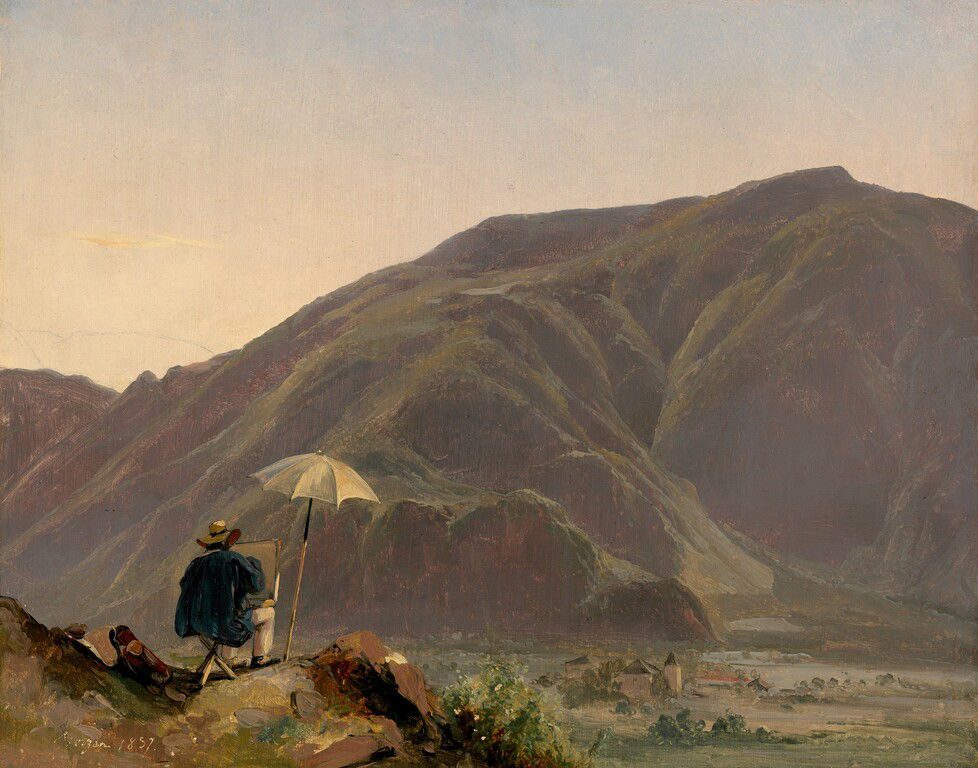 ‘View of Bozen with a Painter’ (1837) by French painter Jules Coignet. Oil on paper, mounted on canvas. Gift of Mrs. John Jay Ide in memory of Mr. and Mrs. William Henry Donner. 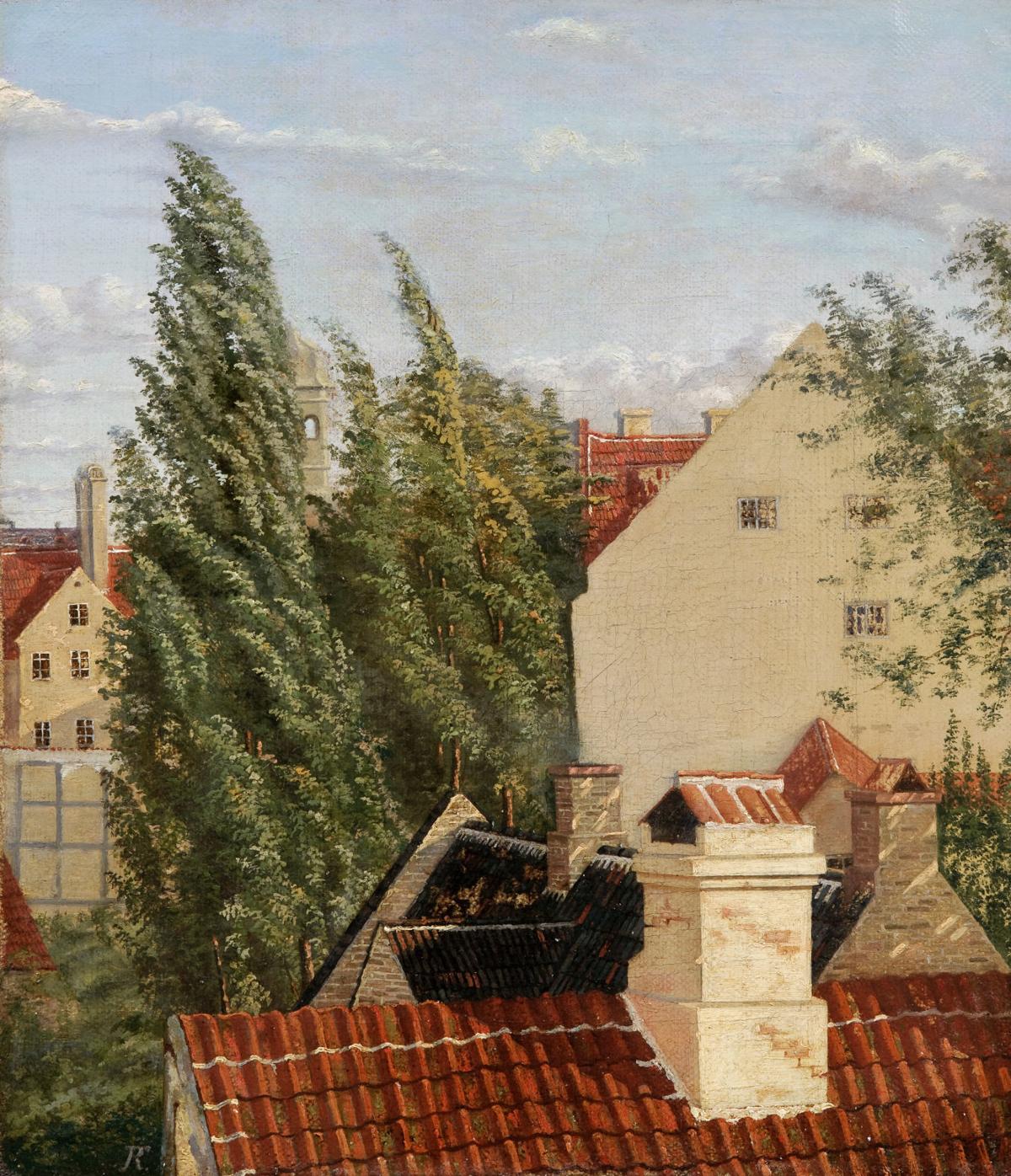 ‘View of Bozen with a Painter’ (1837) by French painter Jules Coignet. Oil on paper, mounted on canvas. Gift of Mrs. John Jay Ide in memory of Mr. and Mrs. William Henry Donner.

While we can’t visit the National Gallery of Art, which is currently closed, consider the possible ways of enjoying its exhibits at home.

“True to Nature: Open-Air Painting in Europe, 1780–1870” begins when artists all across Europe headed to Rome to finish their education, wishing to paint the open vistas and ancient ruins in that incredible Italian light.

In their oil studies of nature, the artists melded scientific interest and poetic sentiment, philosophical views of naturalism with their practical knowledge of painting. While some of these works are of specific sites easily recognized in Rome, Sorrento and Capri, others are focused on geological or meteorological formations. All share a common theme as these early artists strove to realistically render trees, rocks, water bodies or clouds in the sky, as they were affected by light.

Most spectacular is the light that flashes like fire bolts from the earth. The views of Vesuvius erupting up close, like Anicet–Charles–Gabriel Lemonnier’s furious “Vesuvius in Eruption” (1779), contrast with scenes of Pompeii after the volcano had calmed down, in André Giroux’s peaceful “View of Vesuvius Seen from the Ruins of Pompeii” (1827).

The rapid change of moving water is one of the most difficult images to capture in the moment, especially ocean waves with the color, shapes and the reflection of the sun. One of the most spectacular works is “A Study of Waves breaking against Rocks at Sunset” by Baron François Gerard. The light on the darkened water is like volcanic fire on molten earth.

Contrasts of light and dark are fascinating in a variety of settings. The blue sky is sharply separated from the lush interior white portico in “A Terrace on the Isle of Capri” (French, 19th century). “Interior of a Cave” by Jean–Baptiste Aldolphe Gibert is one of several views from within darkened cave, with only a slight crack of light and vegetation seeping in, while in Louise–Joséphine Sarazin de Belmont’s “Grotto in a Rocky Landscape,” the opening of the cave forms a frame for a view of a distant hilltop.

While some artists like Giroux stayed in hotels where he likely would capture the view in his “Santa Trinità dei Monti in the Snow” (before 1825/30), for her montage of nine scenes in “Views of the Pyrenees,” de Belmont lived in a shepherd’s hut for three months.

Particularly intriguing is “Landscape in the Haute Savoie, with an Artist Working in the Open Air” by Vilhelm Kyhn (1850). The Alps form a dramatic gorge. Somewhere in the distance, there is a small glimpse of a waterfall. But where is the artist? You would have to bring a magnifying glass to see the artist on a distant mountaintop, painting the waterfall which is partially blocked for us to see. It has been suggested that this might mean artists show us something in nature that we can not see except through art.

Rocks have a sculptural quality. Large cliffs are impressive while smaller rocks reveal individual details. In Carl Blechen’s “View of the Baltic Coast,” sand dunes include the contrasts of creatures and small forms of green life, next to unusual formations on beach where boulders have fallen. Another of Kyhn’s works, a close-up of “Rocks in Low Water,” is interesting to compare with larger studies of cliffs in recording the effects of water over time to create and change rocky formations.

Water changes appearance in light, but how to paint leaves in ever so subtle motion in the breeze? Artists were advised not to paint every leaf nor to paint every brick as in a selection of village scenes, in order to achieve the total effect.

While geologists at this time were increasingly interested in formation of the earth and revising their theories on the its age, there were new scientific observations by meteorologists in the study of clouds. Moody and mysterious, clouds can change rapidly, in formation and in tone, making them difficult to capture in painting. In some works, clouds fill the whole painting, while in others, like Johann Jakob Frey’s four-piece “Cloud Study,” the sky looms like a mighty force, with the landscape below insignificant.

While some of these pieces would eventually be finished in the studio and sold to a few private buyers, most were not. Works that were not seen by the public for centuries are now available to be seen by everyone who has access to the internet.

Even better than taking home a souvenir from the exhibit, you can download one of the gallery’s open-access images to use as your background in one of your virtual meetings starting with the “Nature and Ecology” collection.

“True to Nature” virtual tour: nga.gov/features/true-to-nature-virtual-tour.html. Other virtual tours available: “Degas at the Opéra” and “Raphael and His Circle”