Virus in brief: Will you be home until April 30? And more about what to expect as we try to stop spread 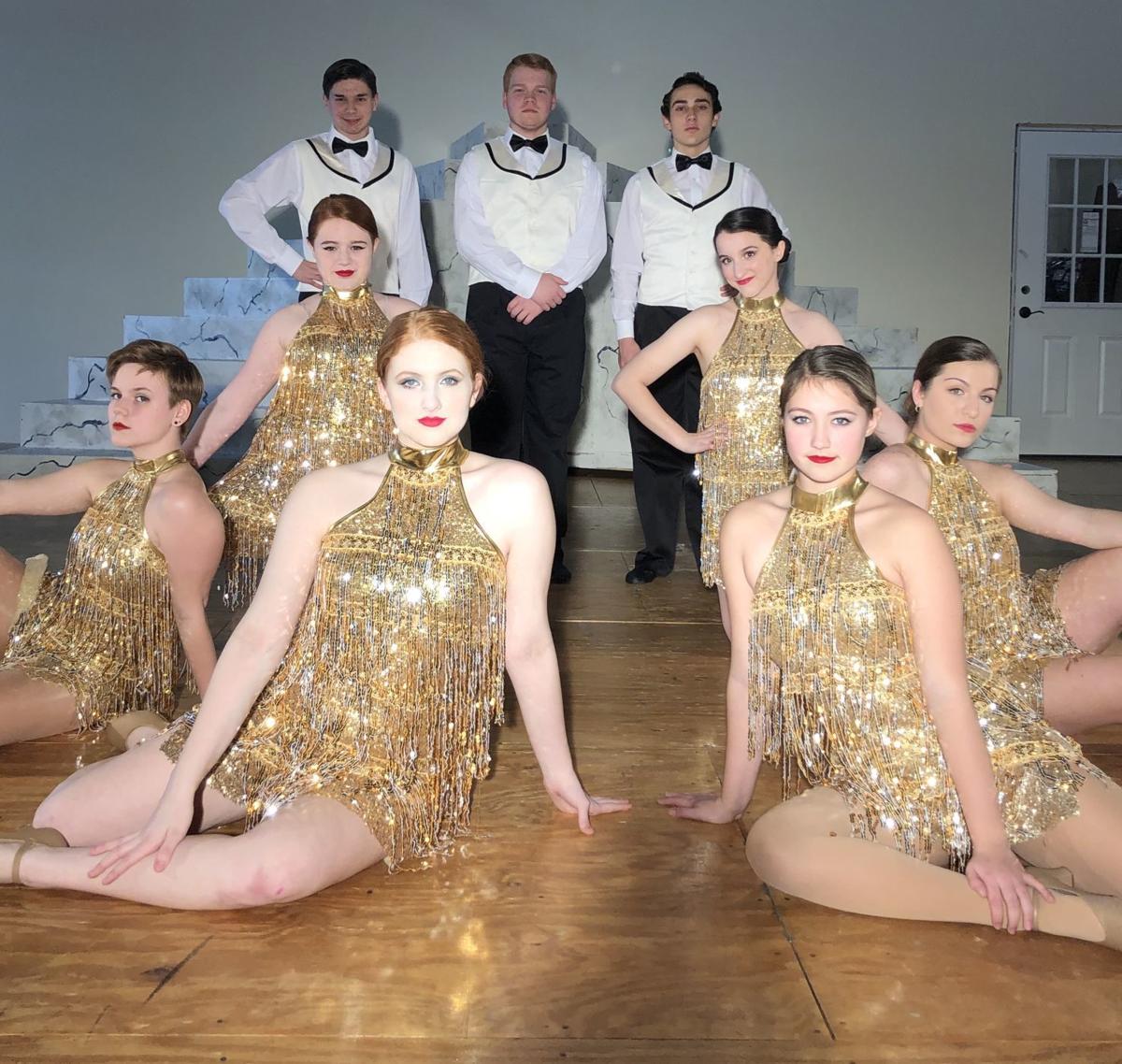 The Featured Dancers all dressed up for their film shoot. The Christian Youth Theater musical opened Friday evening. 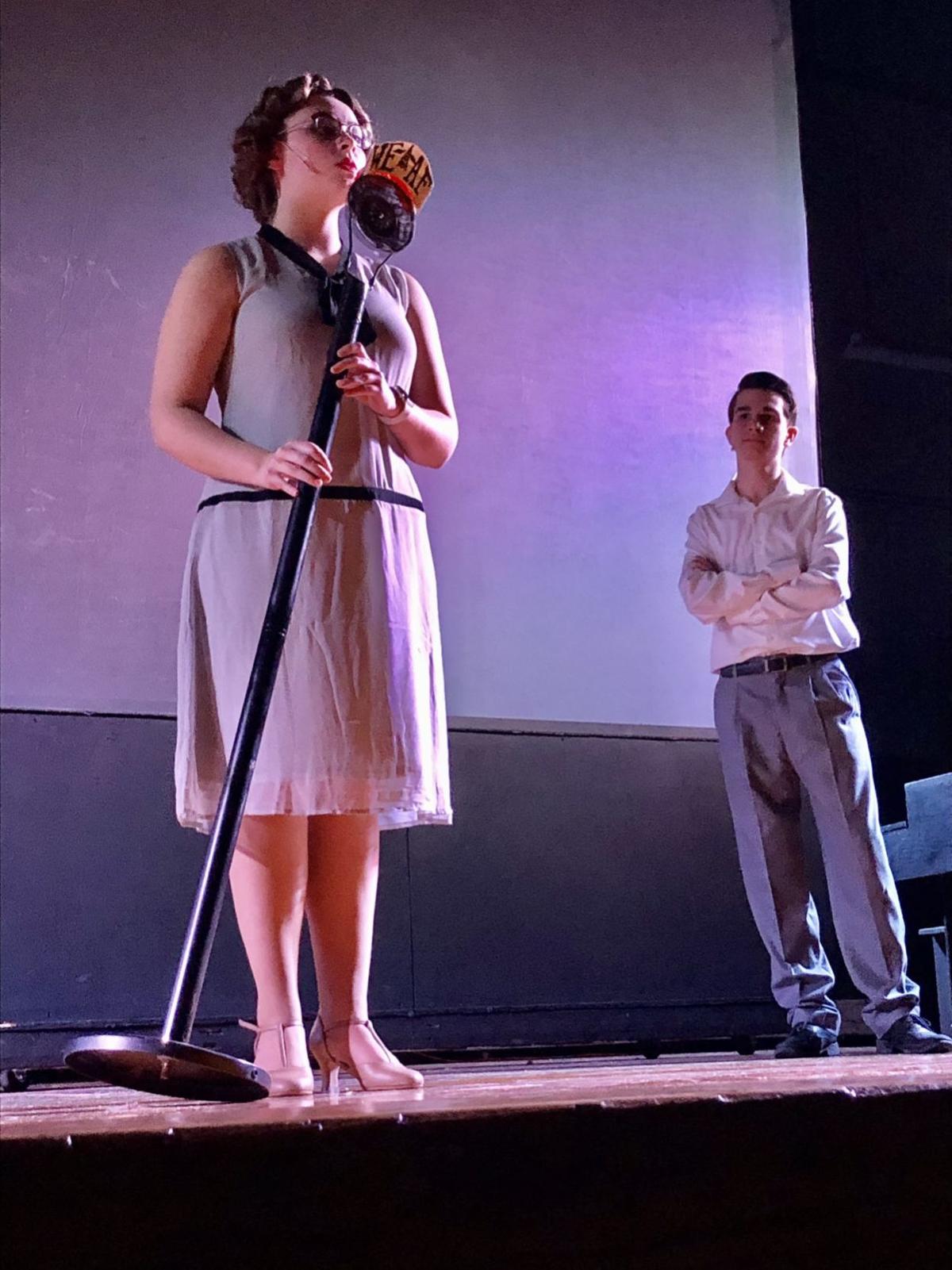 Kathy Selden (Grace Beckwith) records her beautiful voice for the film dubbing while Don Lockwood (Zachary O’Connor) looks lovingly on in ‘Singin’ in the Rain.’ 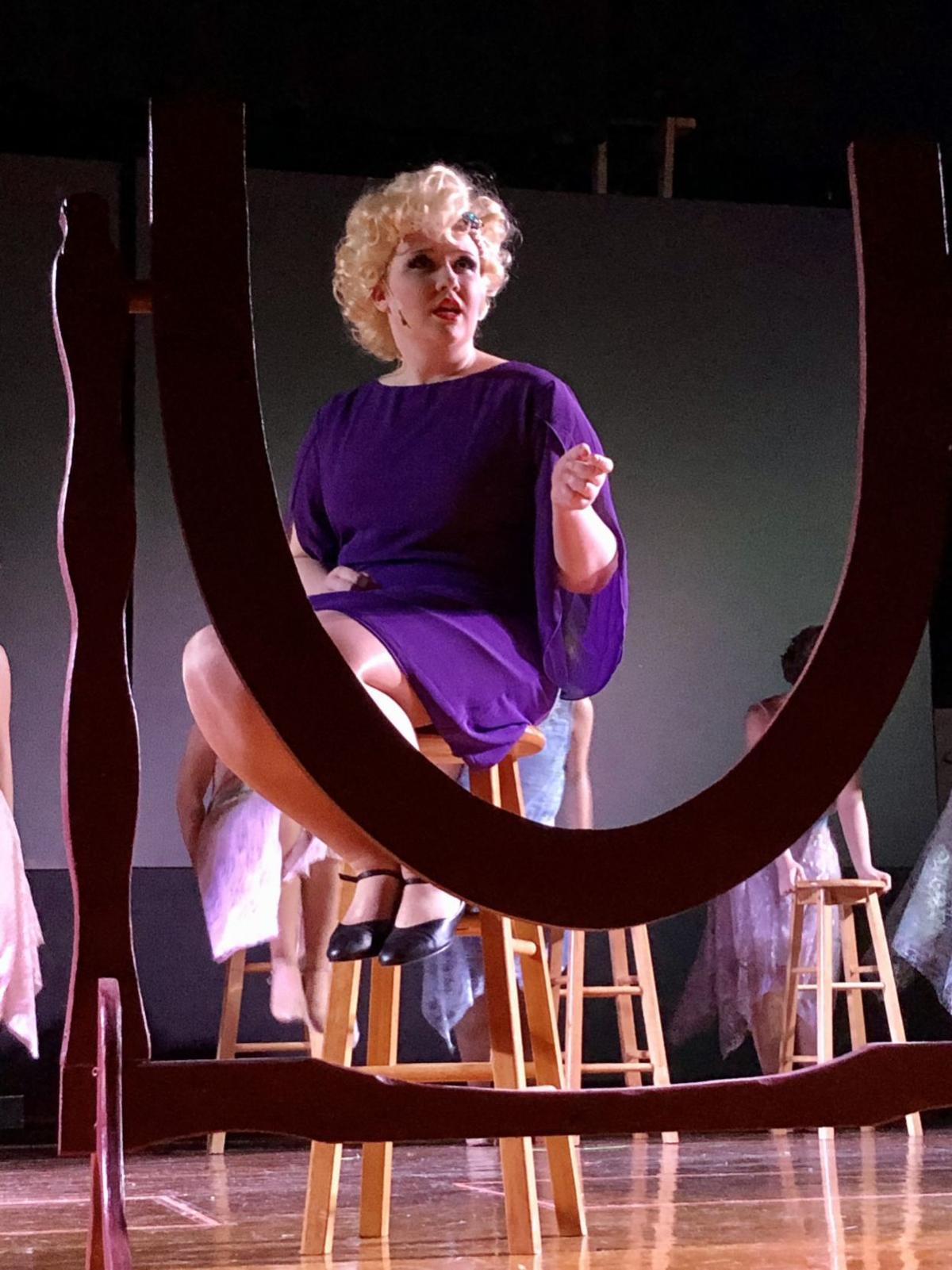 Bethanie Richters lights up the stage with comic relief as Lina Lamont, pictured here giving herself a pep talk. 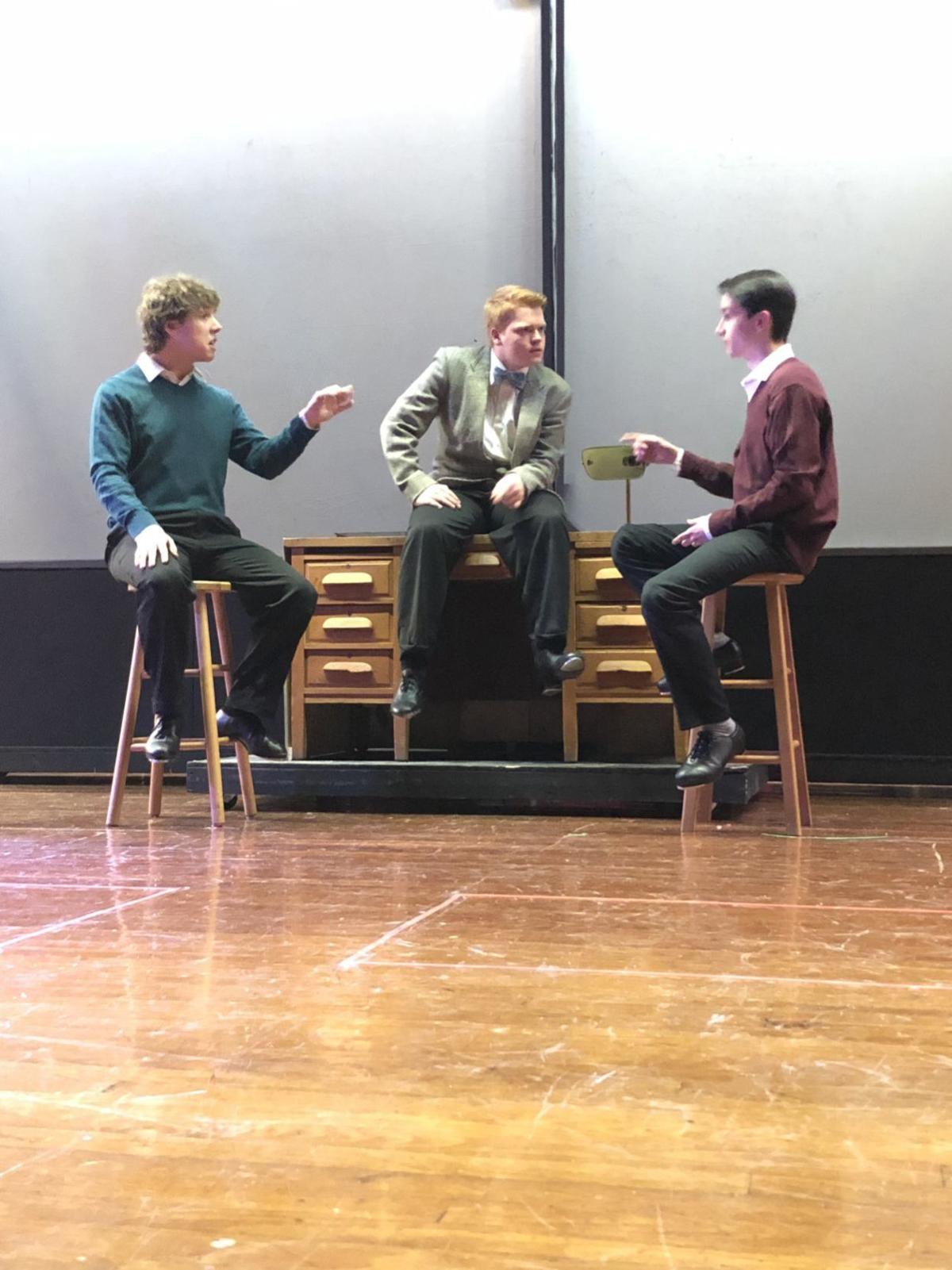 Cosmo Brown (Luke Dufilho) and Don Lockwood (Zachary O’Connor) receive instruction on the proper way to speak for the new ‘talkies’ movies, from their diction teacher (Elijah Hunter), in CYT’s ‘Singin’ in the Rain.’

The Featured Dancers all dressed up for their film shoot. The Christian Youth Theater musical opened Friday evening.

Kathy Selden (Grace Beckwith) records her beautiful voice for the film dubbing while Don Lockwood (Zachary O’Connor) looks lovingly on in ‘Singin’ in the Rain.’

Bethanie Richters lights up the stage with comic relief as Lina Lamont, pictured here giving herself a pep talk.

Cosmo Brown (Luke Dufilho) and Don Lockwood (Zachary O’Connor) receive instruction on the proper way to speak for the new ‘talkies’ movies, from their diction teacher (Elijah Hunter), in CYT’s ‘Singin’ in the Rain.’

Audiences young and old will go home not only happy but genuinely elated after experiencing the Christian Youth Theater of Fredericksburg’s current production, “Singin’ in the Rain.” The ingredients of this winning stage performance include the enthusiasm and camaraderie of its cast of 42 impressive young actors, vocalists and dancers, as well as the uplifting story of true love and its capacity to break through façade and pretension.

The musical is chock-full of delightful songs and dance numbers, ranging from ballet to jazz and tap, some of which call to mind the creations of Bob Fosse and Busby Berkeley, with music provided by a live orchestra. The story, which closely aligns with the 1952 film, is set in the 1920s with the emergence of “talkie” movies.

We first see the celebrated stars of silent film, Don Lockwood (Zachary O’Connor) and Lina Lamont (Bethanie Richters), as a classic romantic couple. But the audience soon learns that image doesn’t quite measure up to reality and, in fact, Don has no romantic interest in his co-star. When, at one point, a horde of fans pursues their favorite celebrity through a park, Don denies that he is the film star and, to buttress that claim, takes a seat on a bench next to an unsuspecting aspiring actress, Kathy Selden (Grace Beckwith) who, he says, is his girlfriend. That chance encounter is the beginning of a relationship that would ultimately blossom in true love.

Along the way, we learn of a second deception of the Don-and-Lina couple. As the industry moves from silent film to the wildly popular nascent talkies, their producer, R.F. Simpson (Ryan Burdock), decides to get in on the new trend. That is when it’s revealed that, while glamorous in pantomimed scenes, Lina, in fact, has a grating, nasally voice, not only when she sings but even when she speaks. To maintain the façade of her smooth talent, a scheme is hatched to have Kathy lip-sync all her songs. Yet, Lina does not gratefully welcome Kathy’s career-salvaging service but uses her power with her theater company to obstruct Kathy’s independent rise to stardom. In the end, Lina gets her just desserts as, much to the audience’s amusement, an “unscripted” curtain rise—plotted by Don and his humorous sidekick and lifelong friend, Cosmo, (Luke Dufilho)—reveals the true talent behind the vocals.

“It is so funny to watch Bethanie play Lina, this unlikable, egocentric, petty character—the ultimate ‘mean girl.’ She is really a talented vocalist and a joy to work with,” said director Corey Vincent Holmes. Holmes says that casting the show was a challenge because all who auditioned were such talented actors, vocalists and dancers, so she sought out “actors who really enjoyed each other’s company and were willing to play and be silly.”

As a result, all of the leads share a chemistry, which is really the “magic sauce” of an engaging production. In fact, the actors who play Don and Cosmo are friends in real life, and the entire cast exudes a fun-filled, life-loving spirit that will delight the audience.

“Any scene with Don and Cosmo is just so joyful and natural, and ‘Moses Supposes,’—a linguistic challenge guided by their diction coach (Elijah Hunter)—is just hilarious,” said Holmes. “And the tap number just after that is really the cat’s pajamas!” she adds, appropriately using ’20s lingo.

“The costumers, under the guidance of Melissa Reinhardt, were designing creations for two different time periods—the French Restoration era for the silent film and the 1920s—including both street clothes of the time and the glamorous, glitzy costumes of the movie stars,” she said. “There are 13 different dance numbers, and many of them required completely different costumes. Another behind-the-scenes hero would be CYT chapter director Rachel Hunter, who juggles everything from coordinating the parents on a spectrum of committees to selecting refreshment offerings.

“ ‘Singin’ in the Rain’ is a stage show about a movie,” said Holmes, who developed an innovative way to keep all the time periods and settings distinct.

She pre-filmed various scenes, which are projected on a giant screen throughout the production; one of which is a hilarious flash-back of Cosmos and Don as mischievous, young rowdy, rascals, which belies Don’s pretentious claims about his upbringing and artistic training.

“Having a director who is both deeply skilled in arts education (Corey has her double masters in Shakespeare, for example) as well as a classically trained ballet dancer is super rare,” said choreographer Bailey Anne Vincent, who happens to be Corey’s sister yet is unbiasedly accurate in her appraisal. “Watching this cast have the opportunity to witness a theater director prioritize movement, formations and technique as much as learning lines was truly unique for everyone.”

Vincent, a professional dancer who splits her time with productions in New York City, has accomplished masterful work in choreographing this show.

“We were also privileged to work with Samantha Barrett as my co-choreographer,” she continued. “This was truly an all-hands-on-deck production!” As the mom of two daughters who are in the musical (Kage, 13, and Follin, 10), Vincent recalls that her initial relationship with CYT began with their desire “to find a group of peers who could be role models in terms of behavior and morale.”

Holmes notes the unique value that live theater brings to young audiences, and says, “The audience plays an important role, and without the audience that story doesn’t get told. The audience is responsible for the story each night. And each night there’s a different audience and they give off a different energy. Each performance is a unique experience depending on who is in the audience.”

Holmes also notes that the musical carries a message that is of crucial importance to today’s youth.

“It’s a play about how some people are different, depending on whether they are in a public or private setting, and tells the story of a movie star coming to terms with letting go of his concern about his public persona to invest in a more personal and private relationship with someone who really matters to him,” she said.

“As a cast, we discussed the current situation with kids and social media who are always cultivating an image with the picture they present on Facebook,” she continued, “As movie stars, Don and Lina are fixated on their image and Kathy doesn’t fit into that scene. But in the end, Don learns that what is important isn’t finessing a public persona but real-life people and how you feel about them in the moment and not through a lens.”