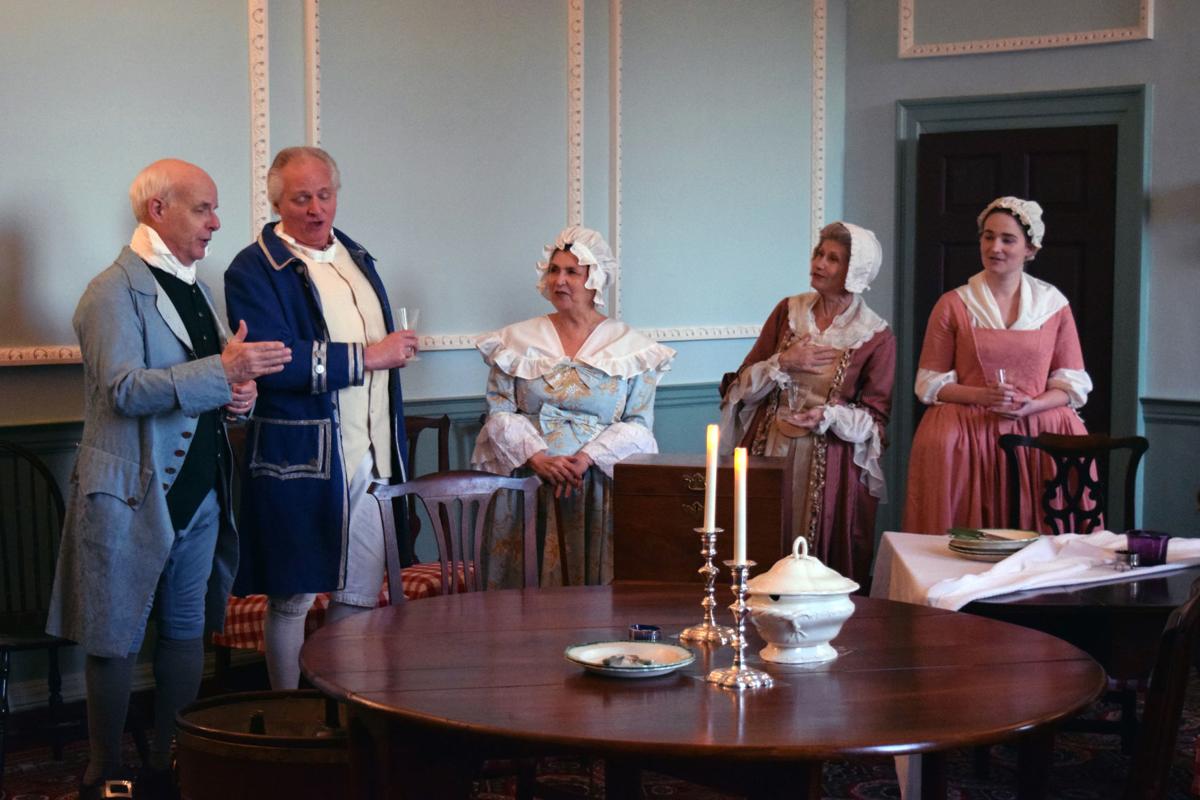 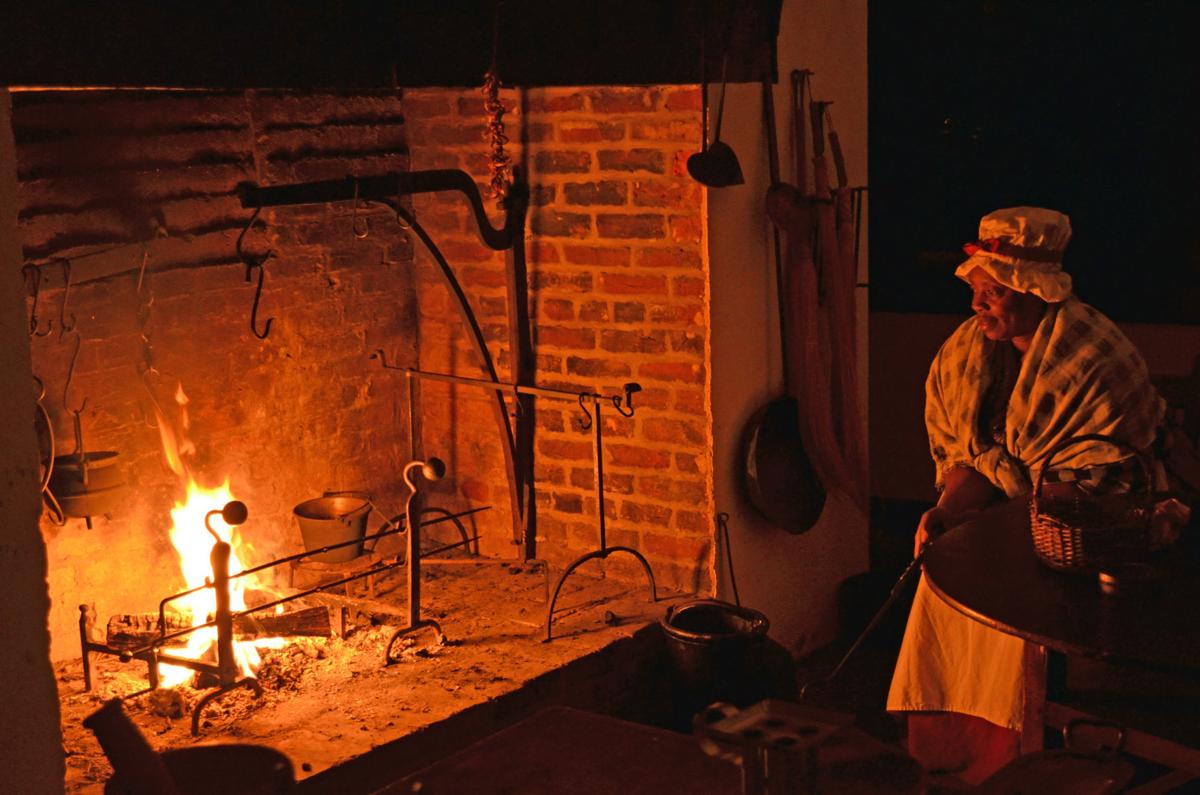 Gladys Perkins portrays Rachel, an enslaved cook, during ‘Twelfth Night at Kenmore.’ The event is back this weekend. 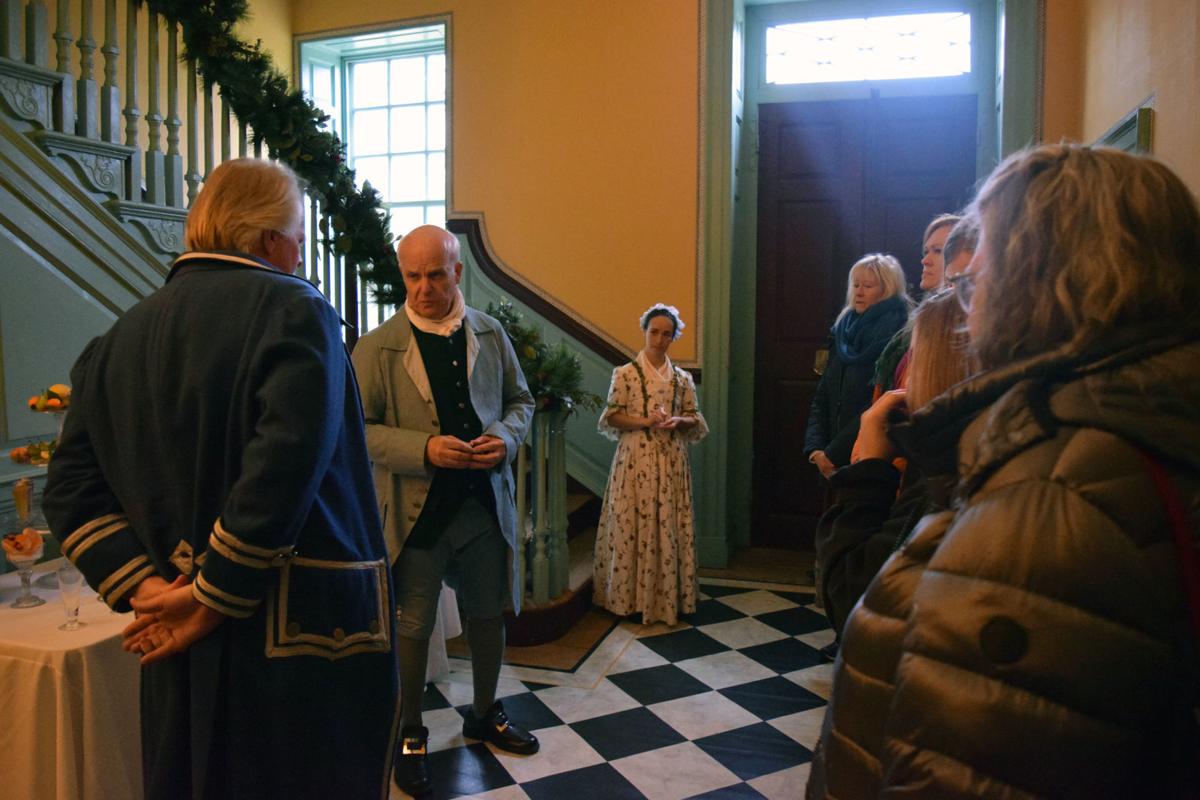 Fielding Lewis (left, portrayed by Rae Ehlen) talks over the latest war news from Norfolk, which the British have burnt, with tavern keeper and friend George Weedon (Wilson Johnson). 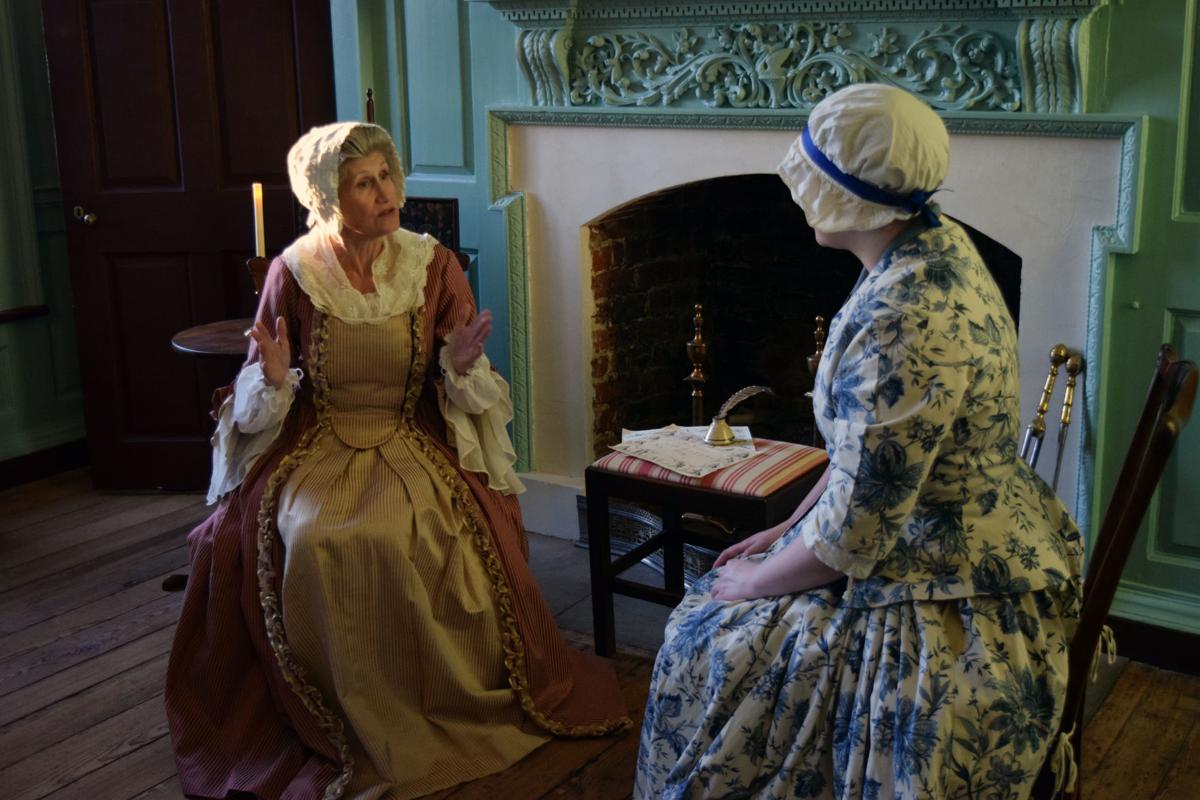 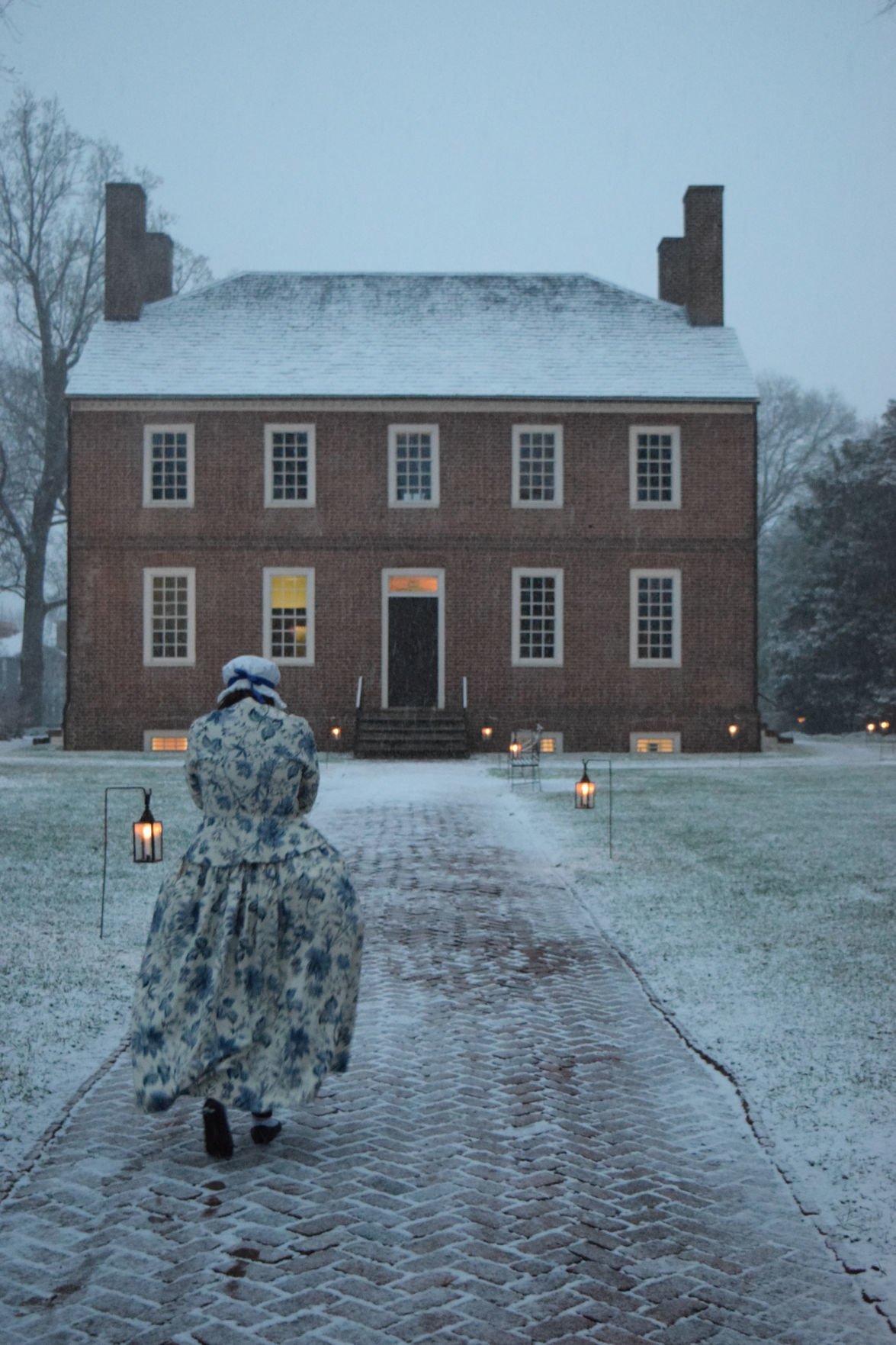 Gladys Perkins portrays Rachel, an enslaved cook, during ‘Twelfth Night at Kenmore.’ The event is back this weekend.

Fielding Lewis (left, portrayed by Rae Ehlen) talks over the latest war news from Norfolk, which the British have burnt, with tavern keeper and friend George Weedon (Wilson Johnson).

The folks at Historic Kenmore invite one and all to step back in time to join in the Twelfth Night festivities at the historic estate, once the home of George Washington’s sister Betty and her husband, Fielding Lewis. Guests will cross the threshold into 1776, the first Christmastide the Lewis family will spend in their newly built mansion, with lavish interior decoration, including finely crafted plaster ceilings.

Twelfth Night has a long tradition and is originally rooted in the church calendar, marking the Epiphany, the visitation of the Magi to the Christ Child. Throughout the years it evolved to include secular celebrations.

“In the 18th century it was a festivity that included huge meals, music, singing, dancing and playing cards, and was the climax of the celebrations, similar to our New Year’s parties today,” said Zac Cunningham, manager of educational programs. “Family and friends have gathered for a party, but there is a war going on. Everybody—be they members of the Lewis Family, friends or enslaved people—are dealing with the complete uncertainty about what the future holds. Today, we look at the outcome of the revolution as inevitable, but, at the time, people had no idea what would happen. We present a series of scenarios in which a talented corps of costumed actors portrays a range of characters, their situations, and the feelings and emotions they would have been experiencing.”

According to Alma Withers, director of educational programs, “Visitors will experience the magic of Kenmore in candlelight while learning history through dramatic presentations based on the true-life experiences of the Washington and Lewis families. It’s edutainment at its best.”

The dramatization begins in the passage, or entrance hall, where Betty Fielding is greeting her guests and leads a toast to that year’s Twelfth Night King and Queen—the lady and gentleman whose slice of the Twelfth Night cake contained one of two beans that were mixed into the batter.

From the hallway, the audience enters the chamber, where George Washington’s mother, Mary, is in a discussion with a granddaughter-in-law regarding the role of women in the revolution and how they could best support the Patriots’ cause and their husbands who are involved in the war. Mary’s advice is that women should keep a stiff upper lip and offer support and encouragement.

The celebration continues as visitors move to the dining room where they can join in songs such as “God Rest Ye Merry Gentlemen” and “The First Noel.” But the tenor changes as they eavesdrop on a conversation between two of Fielding Lewis’ sons. John and Fielding Jr. are involved in a discussion/debate about calling a halt to frivolous pastimes while the war is being waged, particularly the cessation of gambling on horse races at Fredericksburg’s Jockey Club.

Family tension is in the air as fun-loving and irresponsible Fielding Jr. declares that the races should continue while John is more serious about the Patriots’ cause.

“Fielding Jr. was not particularly adept at managing his finances and did eventually end up in debtor’s prison,” said Cunningham. “So the audience views a scene of family squabbling that we sometimes witness today.”

The tour then goes to the drawing room where visitors are introduced to the Loyalists’ perspective. A lonely figure of Fredericksburg merchant Henry Mitchell considers his situation. Originally a Patriot, Mitchell has moved toward the Loyalists’ position, viewing the legal registering of grievances preferable to revolution as the proper way to elicit change. After rumors circle around town that Mitchell is suspected of changing his allegiance, he is ostracized and alone.

Visitors then enter the estate’s outbuilding kitchen where they view the war’s impact on yet another group of Kenmore’s residents, the enslaved community. Word has spread that according to a proclamation by Governor Dunmore, the British would grant freedom to any slaves who would travel to join their troops to fight for or support their sides. A thought-provoking conversation reveals the different ways in which two enslaved women receive the news of the Dunmore Proclamation. Hetty, a young washer-woman and house servant has determined that she and her husband, Philip, who is enslaved at another plantation, would join together to attempt to flee to the British troops at Norfolk. Rachel, an older cook, views the idea of flight as perilous and even the idea of freedom riddled with uncertainty about practical concerns of where she would sleep and what she would eat. Though she initially tries to dissuade Hetty from what she considers to be a foolhardy venture, when she realizes that Hetty has made up her mind she supports her.

“Through this dramatization, we hope to convey that the people who lived centuries ago, who we read about and study—those who lived in grand and not-so-grand dwellings—were real human beings with real feelings and complex emotions. We see that they sang and laughed, and cried just as we do,” said Cunningham.

Pre-registration for “Twelfth Night at Kenmore” is required, and guests reserve a place for a specific day and time. Visitors can partake of refreshments in the estate’s gallery either before or after their tour.