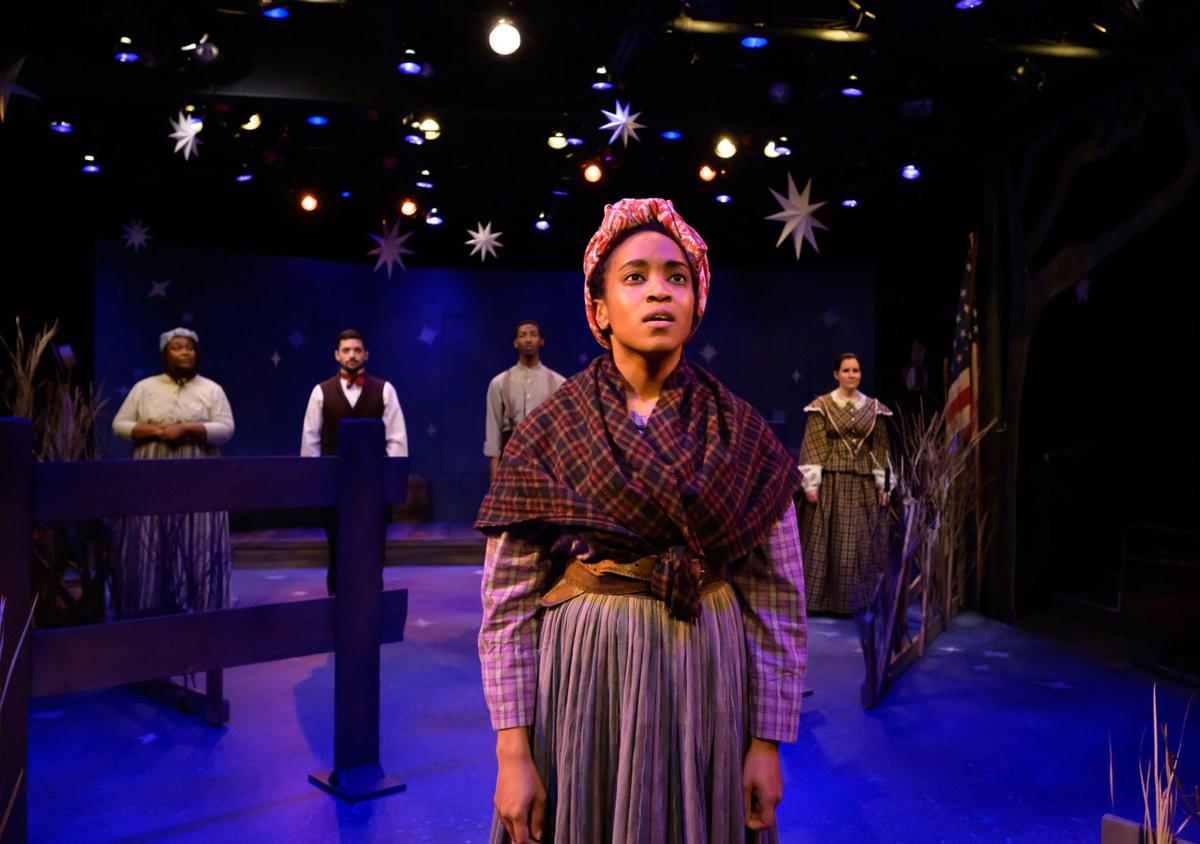 Marjie Southerland stars as the courageous abolitionist who helped hundreds of slaves to safety, in Virginia Rep’s production of ‘Harriet Tubman and the Underground Railroad.’ The one-hour production is suggested for ages 9 and up. 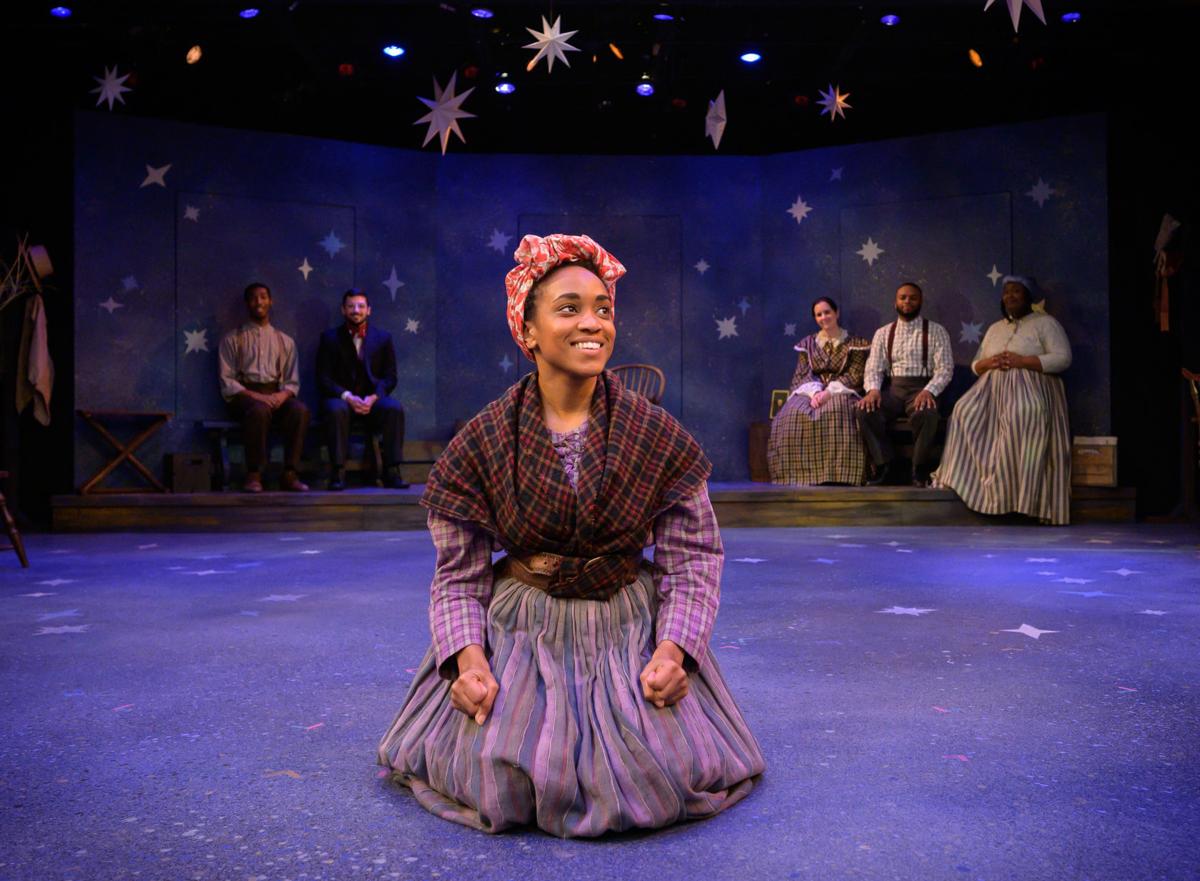 Marjie Southerland stars as the courageous abolitionist who helped hundreds of slaves to safety, in Virginia Rep’s production of ‘Harriet Tubman and the Underground Railroad.’ 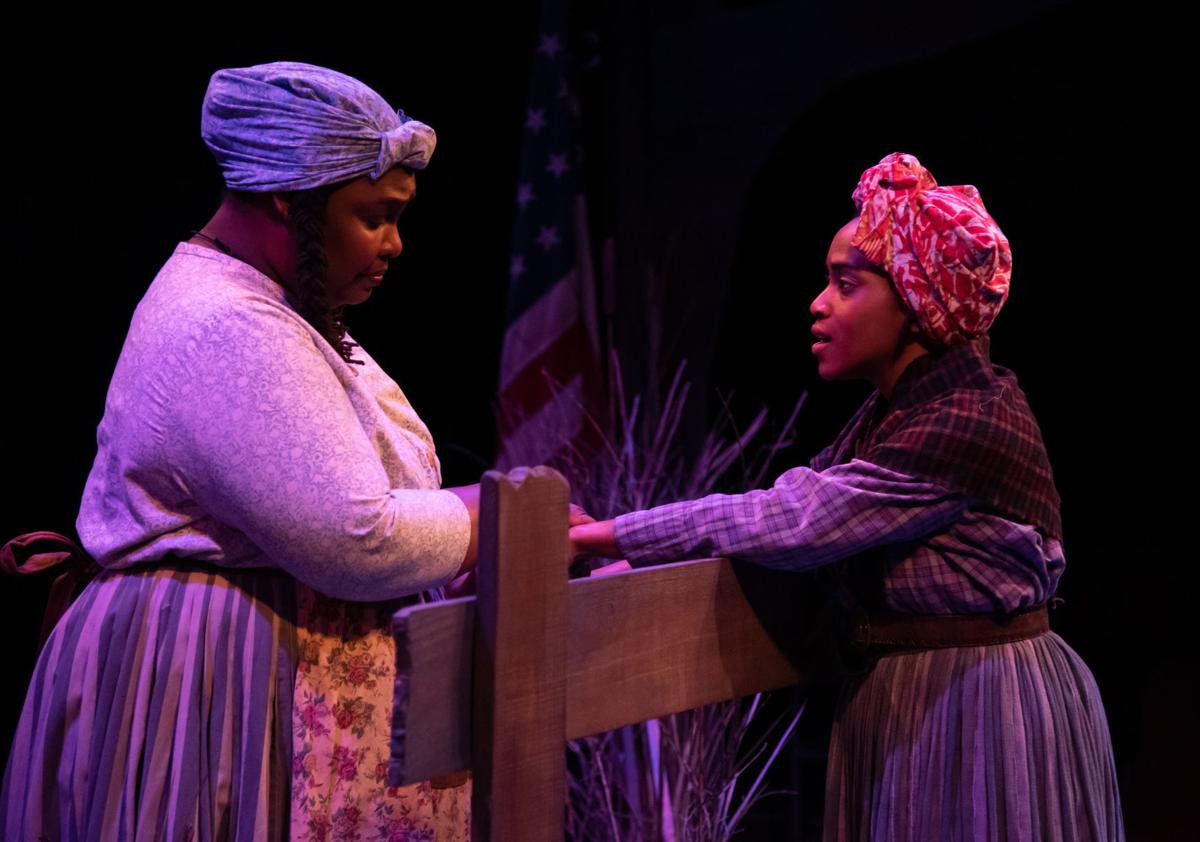 Dorothy Dee-D. Miller and Marjie Southerland appear in the one-hour play, with a book and lyrics by Douglas Jones. 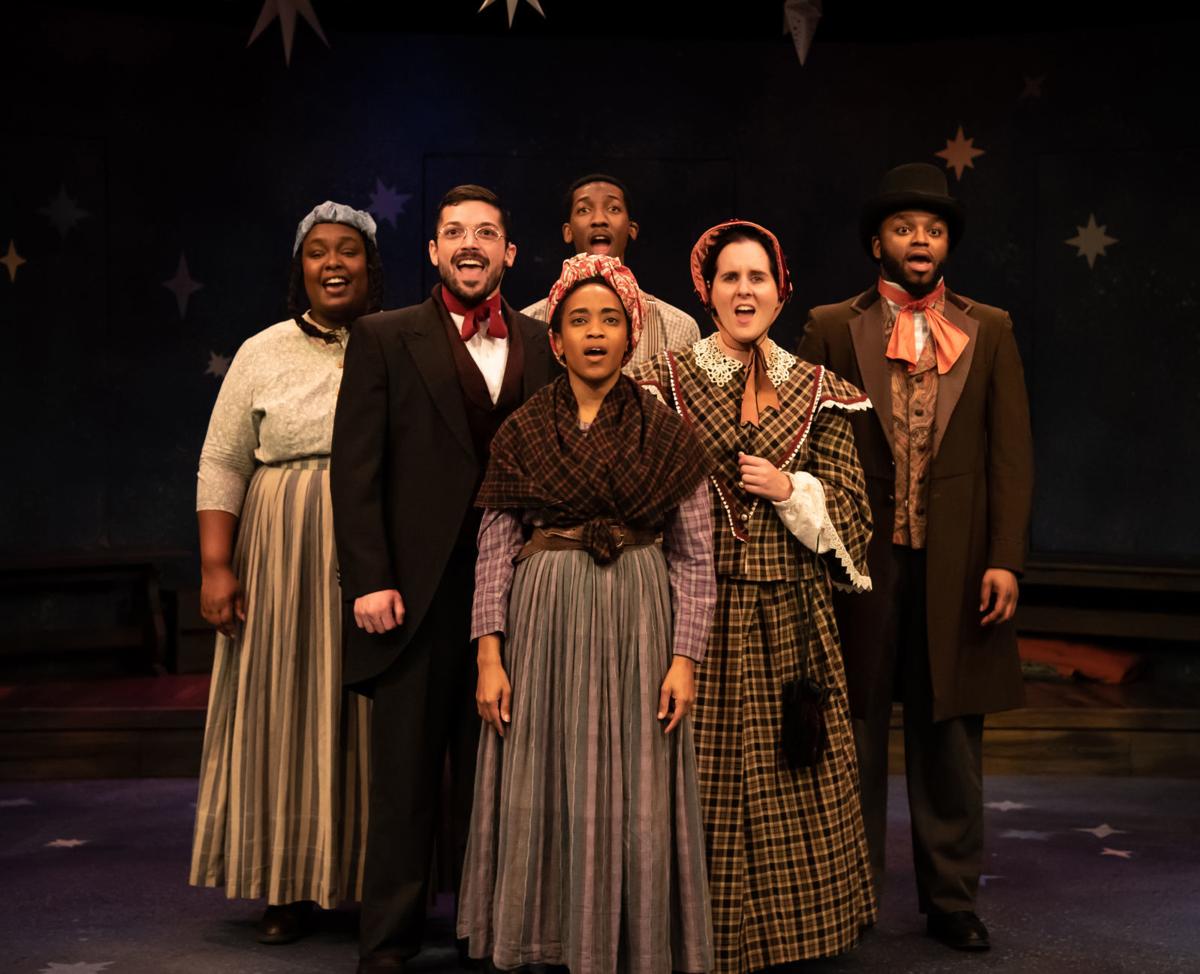 Marjie Southerland stars as the courageous abolitionist who helped hundreds of slaves to safety, in Virginia Rep’s production of ‘Harriet Tubman and the Underground Railroad.’ The one-hour production is suggested for ages 9 and up.

Marjie Southerland stars as the courageous abolitionist who helped hundreds of slaves to safety, in Virginia Rep’s production of ‘Harriet Tubman and the Underground Railroad.’

Dorothy Dee-D. Miller and Marjie Southerland appear in the one-hour play, with a book and lyrics by Douglas Jones.

The current feature of the Virginia Rep’s Children’s Theatre at Willow Lawn, “Harriet Tubman and the Underground Railroad,” will fully engage every member of the family and it may spark important and meaningful discussions among children and their parents and grandparents.

In writing the book and lyrics for this powerful drama, award-winning playwright Douglas Jones has worked with a master’s touch. In just one hour of stage time, through actions and words appropriate for young audiences, he skillfully conveys the atmosphere of an era where people were considered as property and depicts the trauma and terror of the enslaved men, women and children, as well as the inspiring courage and selflessness of one hero who risked her life to help others—Harriet Tubman.

Since Jones first wrote the musical nearly 30 years ago, he has seen numerous productions bring it to life and says he especially appreciates the vision that director Katrinah Lewis brings to this show.

“She leans into realism for these characters and their relationships. We see Harriet with her family. We share her frustration and anger, as well as her determination and faith, but we also experience the pride and fear her family feels,” he said. “Katrinah and the cast and crew have brought the story to vivid life through glorious a cappella performances.”

Lewis, likewise, praises the talent of her cast, including Marjie Southerland whom she had worked with for years at Colonial Williamsburg.

“I knew Marjie was a gifted singer and actor who had a solid knowledge of American slavery. I knew she would be able to handle the drama of Harriet’s story while bringing humor and humanity to her portrayal,” she said.

Lewis acknowledges the contributions of each crew member who played a vital role in the production, which convincingly conveys the story with minimalist props and sets.

“The design team—Emily Hake Massie (set design), Matt Banes (lighting), Sarah Grady (costumes) and Nick Seaver (sound)—created lovely worlds and atmospheres that help us to tell the story with multiple locations and characters. Our music director, Anthony Smith, has produced beautiful and stirring arrangements of the songs, and our stage manager, Justin Janke, was instrumental in helping to decide how to seamlessly move through multiple locations,” she said. “Seeing the magic when all of the elements come together is very rewarding. I love watching the excited young people engage with the cast after the play, and the cast also lights up when they are able to spend time with their audience.”

As the show opens, with stars casting their image on the stage and crickets chirping in the grasses, the cast sings powerfully emotive renditions of longstanding spirituals, emphasized by staccato snaps, claps and stomps. We learn that the lyrics of these songs—“Follow the Drinking Gourd,” “Wade in the Water” and “Go Down Moses”—served to give fleeing slaves direction through their perilous journeys as well as a sense of support and community.

The action begins with Harriet and a fleeing slave frantically racing on to the stage with bounty hunters and their dogs in close pursuit. They run to the home of a trusted sympathizer and abolitionist, who provides them with pepper to cast on the trail the dogs are following. The woman then guides Harriet and her companion to a secret hiding compartment behind her hearth.

As Harriet’s story unfolds, the audience learns that those safe havens are called “stations,” which provided respite and protection along a route to freedom that is known as the Underground Railroad. After accomplishing the harrowing journey to Philadelphia, Harriet could not rest in the freedom she had won and felt called to return to shepherd others, including her family members. At great personal risk, she made 19 trips that empowered 300 people escape to freedom.

Harriet’s heroic efforts were not limited to her role as a “conductor” of the Underground Railroad, and when the Civil War erupted, she served as a nurse, a scout and a guide. Yet, when Emancipation Proclamation and 13th Amendment were issued declaring an end to slavery, Harriet received no compensation for her valiant sacrifice and service, and her petitions for even a humble pension payment went unanswered.

In a stirring scene, Harriet declares that she does not feel bitterness for this injustice and that “Folks only know what you teach them,” creating a threshold for the play’s key message: that the task of her time—and ours as well—is to fight the ignorance that is at the root of injustice, and that it is not enough to be in favor of justice if we do not act on our beliefs. In the words of Harriet: “The test of what you think is what you do.”

“Families who take the opportunity to experience this production will learn a lot about a true American hero in a compelling and entertaining way,” said Lewis. “While the play is geared toward children, there is much for parents to enjoy and learn as well.”